I saw my first snowdrops of the season last week, pushing their way through the semi-liquid mud in a friend’s garden. It almost looked as if it needed swimming lessons. But it set me thinking how archetypally English we take them to be. Except of course they’re not: like so much else in our garden they’re a foreign invader. 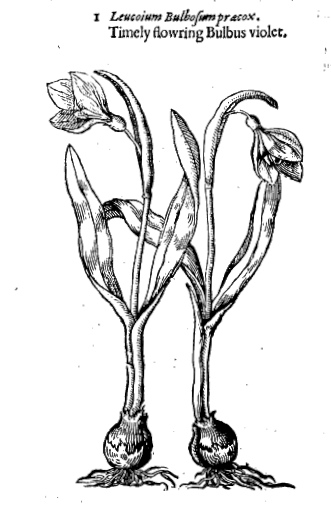 Native to shady woodland across Europe from the Pyrenees to Turkey and Ukraine, no-one knows how or when they arrived in Britain but it must have been well before the end of the 17thc because they appear in John Gerard’s Herbal of 1597. They are included along with leucojums under the heading of “Bulbed Stock Gilloflowers”, and illustrated as the “Timely flowring Bulbus violet”.   While Gerard’s name and classification, which is based on the ancient Greek writer, Theophrastus might strike us as a bit odd,  his written description is accurate.

“The first of these Bulbus violets riseth foorth of the ground with two small leaves, flat and crested, of an overworne greene colour: among which riseth up a smal and tender stalke, of two hands high; at the top whereof commeth forth of a skinnie hood, a small white flower of the bignesse of a violet, compact of six leaves, three bigger and three lesser, tipped at the points with a light greene: the smaller leaves are not so white as the outermost great leaves, but tipped with greee as the others be. The whole flower hangeth downe his heda by reason of the weake foote stalke whereon it groweth. The roote is small, white and bulbose.”

Gerard also tells us that “our London gardens have taken possession of them all these many years”, and that “they are maintained and cherished in gardens for the beautie and rarenesse of the flowers, and the sweetenes of their smell.”   That cherishing continues. Although many plants have their fan clubs, indeed many have specialist groups dedicated to their cultivation, research and promotion, snowdrops [Galanthus nivalis]seem to have attracted a more enthusiastic bunch of admirers than most: Galanthophiles. 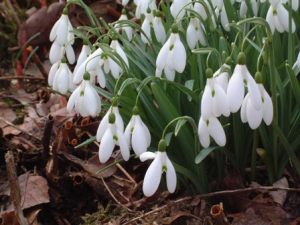 The term was used [if not coined] by E.A.Bowles the garden writer and plantsman, although snowdrop hybridizing and collecting was well under way in the mid-19thc. The most famous snowdrop breeder – nicknamed the snowdrop king -with over 100 varieties to his name [including Magnet], was James Allen of Shepton Mallet where the local horticultural society is keen to rekindle his enthusiasm and passion for the flower in their town. 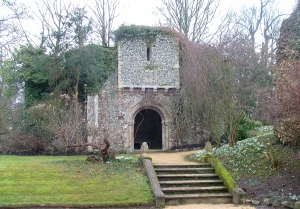 Galanthophile efforts  to convert the rest of us have had a lot of success.  I can remember [at least I think I can] when a snowdrop day was quite an unusual occasion, taking place in just a few gardens: Bennington Lordship, Hodsock Priory, Colesbourne Park spring to mind and all of which continue to have wonderful displays.

But nowadays everyone is at it. 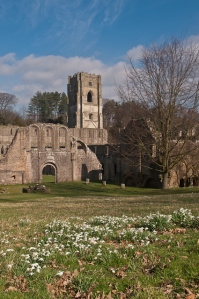 There are dozens, if not hundreds, of gardens and snowpdrop-related events to choose from. The National Gardens Scheme alone lists 71 gardens open in February, many of which specifically mention snowdrops as one of their attractions and are opening specially. They include many historic parks and gardens that are not normally open to the public including East Lambrook Manor nr Taunton, [the garden created by Marjorie Fish], Bramdean House, nr Winchester and Welford Park, nr Newbury.

And then of course there are the gardens that do open on a regular basis many of which have been widening their seasons of interest by mass plantings of snowdrops , often in dozens of varieties.

So now the choice of places to see “The Snow-drop, who, in habit white and plain, Comes on the Herald of fair Flora’s train”  [Charles Churchill, Gotham 1764] is almost endless.  From Colebsourne Park in Gloucestershire to Cambo in Fife ,  from Easton Walled Garden to Austwick Park, nr Settle, and from Fountains  to Plas yn Rhiw or  wherever else you are in the country there will be somewhere nearby to go and indulge – or maybe acquire – the passion to become a galanthophile too! 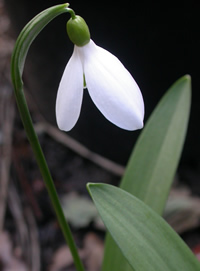 Snowdrop Galanthus x allenii is possibly a wild hybrid from the Caucasus. It was found in Shepton Mallet, the Somerset garden of James Allen (hence the name), in Victorian times and has been cultivated ever since
© Natural History Museum

Further information about some of the many gardens with good snowdrop displays can be can be found at the National Gardens Scheme and the Royal Horticultural Society: 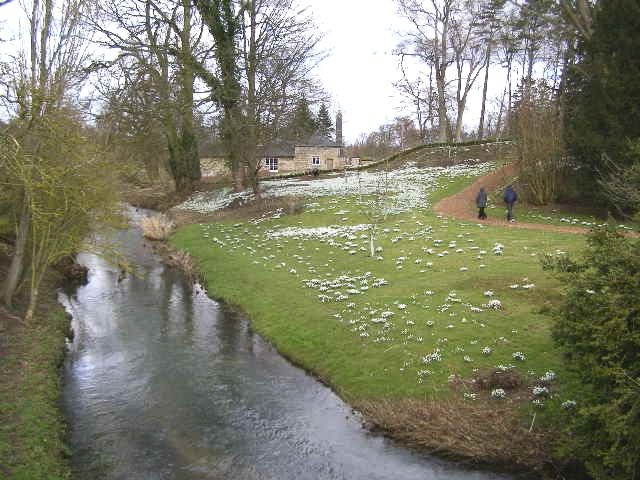