A Surprise in Southend…

I had to go to Southend last week – a place I didn’t really know – and so I checked on the Parks and Gardens UK database to see if there were any interesting gardens to visit while I was there.  I was disappointed to find that we had nothing listed at all in the area. But it’s certainly not because there isn’t anything of  historical interest  but just because our volunteers haven’t had the time to do the research and add information.

Despite the fact it was a chilly & blustery day I went for  a walk along the seafront and was surprised to find, after the usual seaside paraphernalia of amusement arcades, fish and chip cafes and  donut emporia that there was a steep cliff garden with a row of rather elegant Georgian and Victorian houses at the top commanding great views across the estuary. They can be seen on the left in the estate map above, with Old Southend, just a tiny cluster of houses on the right.  A better sense of the topography is given by the print below. So I set off to explore.

Detail from an early 19thc print of the Royal Hotel And Terrace
Essex Record Office, I/Mb 321/1/1

The oldest part of this development is Royal Terrace which was built in the 1790s as a rival to the delights of Margate, Weymouth and Brighton.   Although it attracted a season’s visit from Princess Caroline, the wife of the Prince Regent in 1804, poor transport links meant  the scheme for a new seaside resort was not a great success, and there was very little further building until the railway link to London was completed in the mid-century. 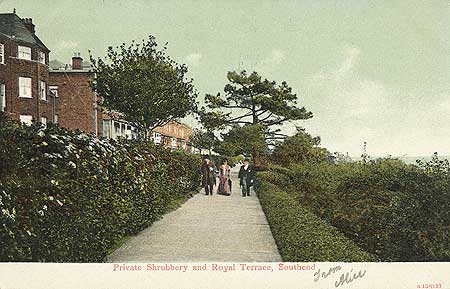 But it was the area between Royal Terrace and the sea and running down the cliffside that was most interesting.  This is “The Shrubbery” and I was surprised to discover, it was laid out at the same time as a private garden for the residents, since the rear of their properties was largely taken up by stables and mews.

The gardens were later opened to the paying public for 3d.  They are now run by the local authority.  The Shrubbery was obviously popular and it features on many postcards. The ones below come from the  Nigel Temple collection which is now held by English Heritage and freely available on-line.

A view of the Shrubbery Gardens. The sign on the right shows an admission fee of 3d to enter. 1900 – 1930, Reproduced by permission of English Heritage.NMR
Reference Number: PC08827

A Thatched shelter in The Shrubbery, Southend on Sea, c.1900-1905 Reproduced by permission of English Heritage.NMR
Reference Number: PC07136 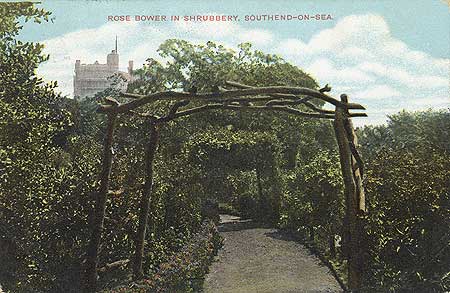 The Rose Bower in The Shrubbery, Southend on Sea, c.1900-1905, Reproduced by permission of English Heritage.NMR
Reference Number: PC07139

As Southend eventually  began to grow as a resort in the late 19th century, the rest of the cliffs began to be laid out as gardens with a wide sea-front promenade  that runs from Southend  to Westcliffe. Development lasted until the 1930s.

Like The Shrubbery these other gardens have suffered from the vagaries of public spending cuts but are still relatively well maintained and brightly planted up in a traditional seaside bedding style every summer. Whatever one thinks of carpet bedding generally it just feels right in Victorian seaside settings, and Southend still seems to do it very well. 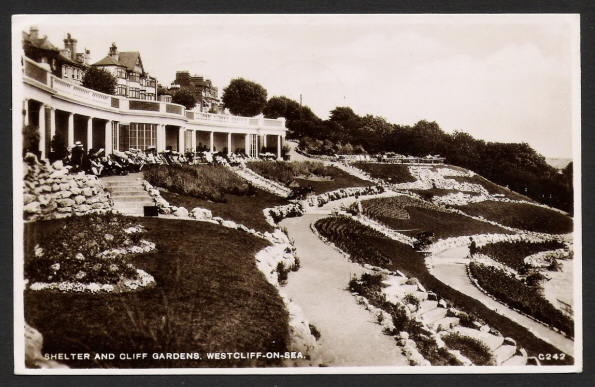 But while planting may have been maintained buildings and infrastructure  suffered and once again it was the Heritage Lottery Fund which came to the rescue in 1999.  The Cliff Gardens have several typical timber seaside shelters, and further along there is the splendid horseshoe-shaped sun shelter at Westcliffe.  According to the local paper, the Southend Echo, plans are now afoot to convert this into a cafe because it is “underused” and tenders are being invited for the lease.   There is also a cliff lift, now 102 years old which was also recently restored with a grant from the Heritage Lottery Fund .

The Cliff Lift on Southend sea front is 40m long and rises 17m between levels. Originally built as an escalator in 1901 it was converted into a funicular car lift in 1912.
© Len Williams & licensed for reuse under Creative Commons Licence

A part of the cliff park suffered a large landslip in November 2002 which was not fully stabilized until April 2013.  The area affected is now being turfed and planted with wild flowers but is due to become the home for a new Museum. 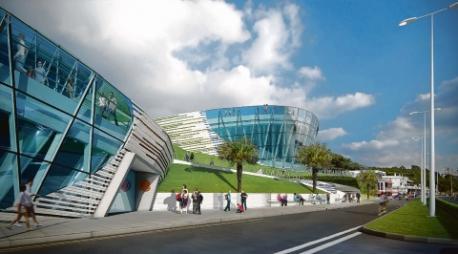 Proposed new museum for the site of the landslip
http://www.echo-news.co.uk/news/9567303.Six_years_to_build_Southend_s_new_Cliffs_Museum/?ref=rc

Cliff Gardens from the collection of Beecroft Gallery
http://www.southendmuseums.co.uk/page/Visit-Beecroft

Further information can be found at:….

Archival records for The Shrubbery

News stories from the local paper: