Gardens in the sky…. 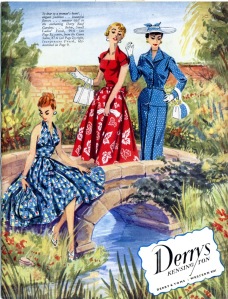 From the underground delights of cemeteries and burial plots of the last couple of posts to something more uplifting and airy!

One of things I like about researching anything but particularly gardens and their history is the way one can get so easily diverted by  endless possibilities and choices…. and very soon an afternoon that was intended to be devoted to tracking down a reference or a single piece of information has become an afternoon spent idly widening ones knowledge and finding another twenty things to research further next time!   That’s what happened to me recently when  I discovered this short piece of film footage whilst looking for something completely different….

that led to this…

and of course I got hooked, forgot my original project and spent the next few hours looking at roof gardens instead!

The Derry & Toms gardens were, of course, those constructed between 1936-1938 by Ralph Hancock, covering 0.6 hectares on the roof of the former Derry and Toms Department Store in Kensington High Street.The tripartite gardens (Spanish, English and Tudor) formed an integral part of the design concept of the building. Hancock had previously designed the Garden of the Nations at the Rockefeller Centre in New York. 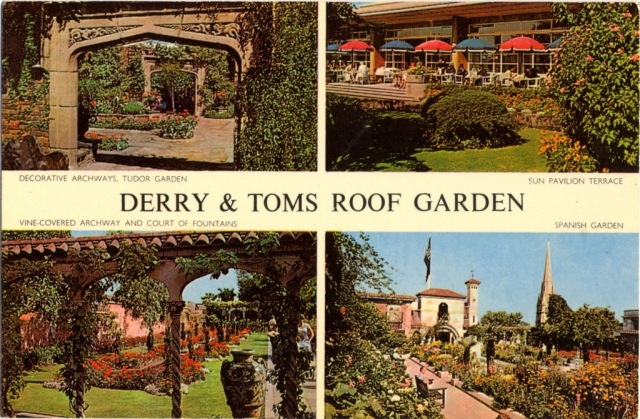 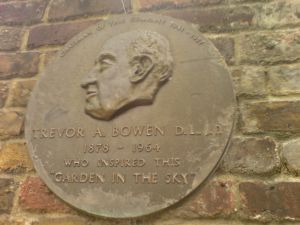 The gardens were the idea of Trevor Bowen of Barkers of Kensington, the department store group which owned Derry & Toms, and he wanted them to outdo the roof gardens not only of Barkers themselves but those of their great rival Selfridges as well.    Derry & Toms closed in 1971 and the building briefly, but famously became the home of Biba.  It is now split up between several chain stores but the roof garden remains intact as a restaurant and club in Richard Branson’s empire.

More interestingly is that the garden is a thriving concern, runs a gardening club, has exhibited at Chelsea this year and is currently fundraising to build a children’s garden in Beirut.  More details on their blog:

There is a short  history of the gardens on our database:

one of the four flamingoes kept in the gardens.
http://www.roofgardens.virgin.com/en/the_roof_gardens/gallery/the_gardens

I also discovered the informative and comprehensive website devoted to Ralph Hancock.  I’m ashamed to say  I had never heard of him until last week so I was quite taken aback by the range and quality of his work in both Britain and America.  The website illustrates many of his gardens and has good links to other film and video footage as well as radio and TV clips. It is well worth taking a long look.

Hancock ‘s gardening ideas  are set out in When I make a Garden, published in 1935.

There are several other blogs which have detailed posts on aspects of the gardens so rather than “borrow” their material I’ve included links here.  I hope enjoy you enjoy meandering your way round them as much as I have. If you have access to back numbers of the RHS magazine The Garden then Ursula Buchan wrote an article about Hancock called “The Final Storey” in the October 1993 issue.

There are a lot of early black and white photos of the gardens in this blog from Kensington & Chelsea’s local studies library which covers the use of the gardens as a site in MichaeL Moorcock’s fiction:

the 75th anniversary is covered in: http://universityofglasgowlibrary.wordpress.com/2013/09/20/derry-and-toms-roof-gardens/

The Spanish Garden on the roof of the Derry and Toms Building in Kensington High Street. © English Heritage.NMR
Reference Number: AA084998

The Tudor Garden on the roof of the Derry and Toms Building in Kensington High Street, 1971
© English Heritage.NMR
Reference Number: AA084999