What on earth is the connection between historic parks and gardens and Desert Island Discs?   Until I starting researching Mr Middleton [see my last post] I wouldn’t have thought there was one BUT Mr Middleton was castaway by Roy Plomley on 16th November 1943, the first  gardener to be exiled to the famous desert island.

Sadly almost none of the earliest broadcasts of the programme were archived, and most of those that were recorded did not include the music, although the playlists are available.  Mr Middleton’s choice of music was eclectic to put it mildly.

He chose the band of the Grenadier Guards playing “In a Monastery Garden” and Franz von Suppe’s Poet and Peasant Overture.  There was the BBC symphony chorus singing “Dear Old Home Songs”  which I can’t track down precisely [so if you think know then please tell me].  Then came the barcarolle from  Offenbach’s The Tales of Hoffman and  on a lighter note Malcolm McEachern singing “Drinking”

and his final choice was Albert Richardson’s comic song The Old Sow….

Fred Streeter in the demonstration garden at Alexandra Palace.
BBC

So who else has been on Desert island Discs? And what are their musical tastes?

Surprsingly it was nearly 14 years before the next gardener, Fred Streeter,  made it ashore after his shipwreck!  In his interview he reminisced about his career on country estate gardens, including standing in one garden where he worked  listening enthralled to Adelina Patti singing opera in the drawing room.

In 1926 Streeter  was invited by Lord Leconfield to become head gardener at Petworth House and he continued to work there as a hands-on gardener whilst he also pursued his broadcasting career. Indeed he remained at Petworth for the rest of his life. It’s worth listening to the surviving audio clip of the programme, even without the musical choices, just for his comments about wages and staff levels there, and  in the others gardens he had worked in, all delivered with a soft Sussex accent. And, of course, he mentions Mr Middleton who first invited him to broadcast.  Streeter was later to take over many of Middleton’s roles on radio and TV.  Most of his music choices were parlour and theatre songs including, like Middleton,  In a Monastery Garden.  His luxury was a greenhouse in order to grow orchids to make his fellow gardeners jealous. You can hear his interview at:

There’s a also short biography of Fred Streeter on our database: 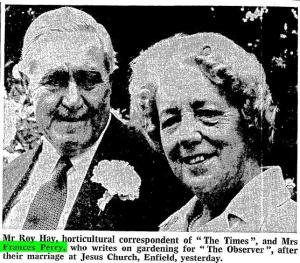 The 1960s saw five more gardeners ending up alone on the desert island, although  sadly none of the recordings  have survived.  Roy Hay,  broadcaster and gardening correspondent for The Times, chose more parlour songs as well as classical music such as Chopin. His wife, Frances Perry, who was castaway in 1980 had very different tastes, and included a recording of Galapagos Sea Lions.  Born in Enfield on the northern edge of London she had been fascinated by plants and gardens ever since she was 18 months old and she “fell head first into a tub of liquid manure”. She became the  protegee of the great plantsman E.A.Bowles who lived nearby at Middleton House.   Nothing could be further from the rural idyll than Enfield now, but in Frances Perry’s childhood it was still a place of meadows and open spaces. She picked wild flowers there which Bowles helped her to identify. ‘I look upon you as one of my boys,’ he said. [Obituary, The Independent, 15th October 1993]  After he died in 1954 and the gardens were transferred to the London School of Pharmacy she chaired the Garden Advisory Committee.

Perry also took a great interest in Capel Manor which was near her Enfield home. She  helped rescue the estate from neglect, and then supported the horticultural college from its foundation until her death in 1993.  She was a prolific author, the first woman on the council of the RHS and their first woman vice-president.  Her interview provides a good insight into the depths of the inbuilt gender stereotyping prevalent in horticulture of the time.

Other horticultural castaways in the 1960s included Percy Thrower whose favourite music was the Skaters Waltz, and Harry Wheatcroft, the flamboyant and mustachioed rose-grower. He chose well-known classical pieces & appropriately a song called “The English Rose”. 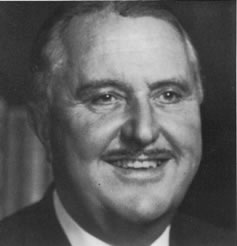 Next was Dr W.E.Shewell-Cooper, another prolific author, pioneer of no-digging gardening and founder of the Good Gardening Association.   who included a nice piece of horticultural humour: Flanders and Swann’s song Misalliance about the love between the honeysuckle and the bindweed.  Unfortunately it’s not possible for copyright reasons to include  film footage of Flanders and Swann themselves but there is an amateur recording available if you want to know why the romance of the lonicera and the convulvulus was doomed from the start. 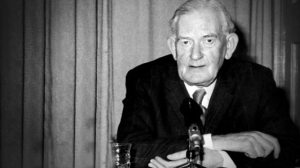 In 1967 it was the turn of Xenia Field, the gardening correspondent of the Daily Mirror, and in 1973 of Bill Sowerbutts who provided another link to Mr Middleton.  Sowerbutts had started broadcasting in 1945 with twenty minutes talks usually about food crops, following in Middleton’s footsteps. In 1947  he went on to appear in the first edition of ‘How does your garden grow?’, soon to be renamed ‘Gardener’s Question Time’, which was another offshoot of the Dig for Victory campaign.  Always introduced as  “Bill Sowerbuuts of Ashton-under-Lyne” he remained  a stalwart of the programme  until 1983 when he retired.  Asked about his favourite flower he replied: “the cauliflower because its the only that makes you any money”. Very little of his interview with Roy Plomley interview survives but in between a wide range of classical pieces he reminisced about his career and the decline of allotments and vegetable growing:

Tameside Council have put up a “Blue Plaque” in his honour on the Broadoak Hotel – however because of his gardening prowess it is green!

Graham Thomas followed with a  wonderful range of early music in 1975 but his interview too has been lost.  However, from then on full recordings of all the garden-related interviewees are available to download from the Desert Island Discs webpage.

There was a long gap of another 14 years before Rosemary Verey was shipwrecked in 1994, but within a few months she was joined by Penelope Hobhouse. Since then Geoffrey Smith, Christopher Lloyd, Susana Lloyd, Alan Titchmarsh, Anne Scott James and, last but not least, in 2006, Monty Don have been washed ashore.  Incidentally it would appear that gardeners are fairly conservative musically since Monty was the only one to choose “pop” music.

You can find a full list of castaways – all 2992 of them at the last count – on the programme’s website, and it can be searched in all sorts of ways, including by occupation.

But the BBC’s decision about how to classify its interviewees isn’t always straightforward.  Some famous gardeners like Germaine Greer, Beverley Nicholls, the Duchess of Devonshire, Peter Carrington, or Roy Strong are not listed as that although it’s true they probably more famous for doing other things, whereas they have included Anne Scott-James and Susana Walton.  And aren’t there some great gardeners they have ignored?  What about hearing from Beth Chatto? David Austin? Fergus Garrett? Nigel Colborn? Bob Flowerdew? Arabella Lennox-Boyd? Pippa Greenwood? Sarah Raven? Mary Keene? Ann Swithinbank? Robin Lane Fox? Noel Kingsbury? Mirabel Osler? Anna Pavord? or even the Chair of Parks and Gardens UK, Barbara Simms? The list is almost endless.

And to finish on a questioning note.

Which gardening celebrity wanted to take The Education of a Gardener by Russell Page as their book?

Whose favourite track was of the dawn chorus?

Who chose Rembrandt’s painting of Hendrickje Bathing as their luxury item?

And finally who, perhaps more sensibly, asked for a bundle of prunings from a good vineyard so they could plant their own vines?