from Horace Walpole’s Essay on Modern gardening, 1785, tailpiece to p.95

Another parcel of books arrived yesterday and as I struggled to find room for them on the shelves it made me realise that there are an awful lot of books about gardens and gardening, quite a few about their history  or the gardeners who made them, but that almost nothing is written about the tools and equipment that have been used to make and maintain them.  So this post is planned as the first of an occasional  series to try to remedy that! 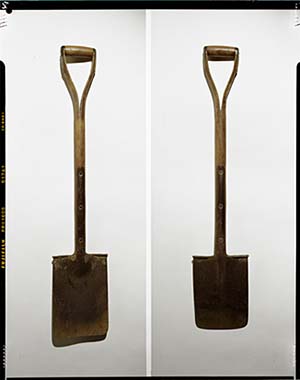 When I first began to investigate this topic a few years back I thought it would be easy but in fact it been one of the more difficult topics I’ve had to research.  I suppose in a way that not surprising. Garden tools are utilitarian and surprisingly ephemeral.They rarely survive from generation to generation since the more they are used the more likely it is that they will break or wear out and get repaired or replaced.  And of course, they are not the kind of thing that gets noticed.

In the days before the digital camera, Flickr and Facebook where people detail every corner of their lives and share it with their friends – who would describe, draw or paint a picture of something as mundane and boring a spade or a pair of shears?

Even when they do they’re almost always just tiny details in the background.

You can’t go to the National Gallery or the Tate and expect to see paintings of tools. Instead you have to hunt through the rooms examining the backgrounds of

paintings in the hope of seeing something interesting or trawl through their websites and hope that that the images have  been ‘tagged’ in a useful way. (and discovering that sadly they usually haven’t.)

Which means that the few paintings that do show working gardeners and their tools are so well known.  Is there anyone who didn’t recognize  these details from Breughel’s much copied Spring ? 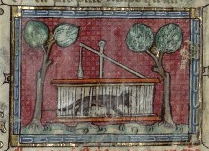 The first list of tools in England I can find was written by Alexander Neckam, abbot of Cirencester, in 1190. It was a list of suggestions for every well equipped peasant’s shed…broad bladed long knives, a spade and a shovel, a seed box, a billhook for dealing with brambles, 2 baskets, a trap for vermin and a wheelbarrow ….. and finally a snare for wolves!

By 1388 the tools held by the gardener at Abingdon Abbey included the things on Neckam’s list but with the addition of a long handled scythe and two small sickles… and also  ii cissorie and a dung pot.

Cardinal Wolsey’s gardener at Hampton court over a hundred years later had much the same list… 3 spades, 2 iron rakes, 2 lines, 4 dibbles, i billhook, a wheel barrow, 2 hatchets, a pick, & a tub to water herbs.

from Leonard Mascall, A booke of the arte and maner, howe to plant and graffe all sortes of trees,1572

The 16th and 17th centuries saw an increase in interest in gardening rather than just food production, and the beginning of more specific tools for more specific tasks.  Leonard Mascall writing in 1572, for example, lists 11 different kinds of tools for grafting and pruning work, whilst Walter Blith’s The English Improver Improved of  1653 illustrates 4 different kinds of spades alone – for turfing, gouging, trenching and paring.

By the turn of the 18th century  when Henry Wise translated two French gardening books as   The Retir’d Gardener  he had  a whole chapter called “Of the Instruments necessary for a Florist Gardener” with  illustrations of many of them. But garden tools are also very personal things as Mary Keen writing in The Garden (‘Finding the right tools for the job’, Sept 2014, p.21) points out pointing out that while cookery books often have a batterie de cuisine that lists the equipment needed to be a good cook, she’s never seen a batterie de jardin.

John Evelyn certainly had a batterie de jardin of his own – or rather for his gardener – and he describes and illustrates more than 70 tools and pieces of equipment in Elysium Britannicum, including wheelbarows and water barrows, rakes of ‘severall sizes and finesses’, and a veritable array of spades, trowels, hoes, shears and pruning to to say noting of other garden essentials such as flower plots, cases and measuring equipment.

Until the industrial revolution all of these tools would have been hand-made; the metalwork crafted by blacksmiths and the wood worked by carpenters. In much of the country and  on self-sufficient estates tools would probably have been to order, but elsewhere, especially in and around towns, a small number tools could probably be bought in shops.  For example when Thomas Collins who had an ironmonger’s shop in the parish of St Martin in the Fields  [then on the outskirts of London and near plenty of market gardens] died in July 1685,  his shop contained  ‘7 grafting sawes, 5 paire of Garden sheares, 6 garden hoes, 10 Labourers shovells, 7 Stable Shovells, 2 Stele spades, 1 Clay spade at 20d 1s 8d, 6 ord. spades, and 2 Garden rakes.’ [London Metropolitan Archives  AM/PI/1/1685/050].   These days of course hand-made is all the rage again.

Advertisment for George and John Deane’s range of tools, from the John Johnson Collection of Ephemera, Bodleian Library

However, once the industrial revolution provided the technology for mass production then a vast range of standardised tools became available, as this table shows….

The range of garden rakes available, from Beeton’s Book of Garden Management, 1871 p.224

Watering can for seedlings, from Alfred Smee’s My Garden: Its plan and culture, 1872

from cucumber straighteners and umbrellas for individual dahlia blooms to cactus shears and aphid brushes to a mechanical flower transplanter and four-handed shears.

Most depended on the availability of cheap labour and explains why they disappeared rapidly in the 20th century and are now just forgotten curiosities.

Of course most of these oddities were confined to larger gardens and estates. More ordinary people who were beginning to manage their own gardens without necessarily employing a gardener, would have chosen from a standard factory range.

The potting sheds at Heligan
image courtesy of William Bishop

Before the joys of e-bay offered a safety net garden tools, unlike decorative objects or more prestigious purchases rarely survived long after their first owners had finished with them.  Now their practical battered beauty makes them precious and collectible: items for the museum rather than the recycling bin.

There is a small museum of garden tools at Clumber Park in Nottinghamshire. The former home of the dukes of Newcastle was demolished in 1938 but the walled kitchen garden and some of the glasshouses survived and the museum is housed in some of the garden outhouses.

The gardener’s room at Clumber Park, image from http://www.jibberjabberuk.co.uk/2014/08/kitchen-garden-notes-walled-kitchen.html

An array of pots at Clumber Park, image from http://www.jibberjabberuk.co.uk/2014/08/kitchen-garden-notes-walled-kitchen.html

Elsewhere there are collections of garden tools at The Garden Museum in London, at Heligan in the potting sheds, at Calke Abbey in Derbyshire in the gardeners bothy, amongst other places.  If you know of any other good collections please let us know as we don’t have any listed on our database yet.  What we need is for someone   to do for horticulture and garden-making what the Museum of English Rural Life based at Reading University has done for agriculture and rural crafts,  before it’s too late.  To see what I mean take a look at: http://www.reading.ac.uk/merl/ 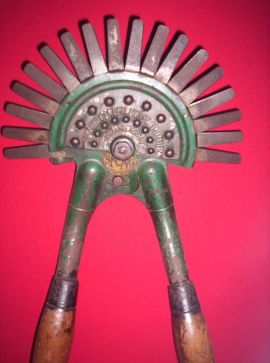 On a more positive note there is an excellent website for vintage and old garden tools, which is probably the most comprehensive image database:

If you want to know more then there are several books worth looking at:   Kay Sanecki’s Old Garden Tools in the Shire series  is a good short basic introduction, so is the catalogue of the 1992 Garden Museum exhibition Historic Garden Tools by Christopher Thacker and Francesca Greenoak.  Another well-illustrated book published in 1996 is based around Guillaume Pellerin’s collection of old French garden tools: Everyday Things: Garden Tools by Suzanne Slesin and others.

The most recent addition came out just a few months ago.  It’s the RHS’s Tales from the Tool Shed: The history and use of garden tools by Bill Laws. I had high hopes when I first saw it. It had the potential to be a great book and become the standard work.  Sadly it’s rather disappointing ‘history-lite’. Beautifully produced and pretty to flick through but absolutely nothing in any depth or that couldn’t be found on the web in 5 minutes by google searching.  So there’s still time for someone out there to head off to the archives and the toolshed & then to get researching and writing….

Tools in the Long Barn
image courtesy of William Bishop

Email - education@thegardenstrust.org Website - www.thegardenstrust.org
View all posts by The Gardens Trust →
This entry was posted in Uncategorized and tagged Clumber, Heligan, John Evelyn. Bookmark the permalink.