In a recent post I looked at Pitzhanger, the country retreat of Sir John Soane.  But Soane was interested in gardens at several other levels. Firstly he designed garden buildings, publishing a series of ideas and plans for seats, temples, tea houses and pavilions. That’s perhaps not surprising. He was after all an architect and in his early days an architect desperate to get commissions.  There are also schemes for some gardens to accompany  his major country house commissions. What is perhaps more interesting is that he also collected plans and drawings not only by other architects, including Robert Adam, but also by garden makers like George London and Henry Wise.  Many of them are in his collection at the Soane Museum in Lincoln’s Inn Fields in central London. 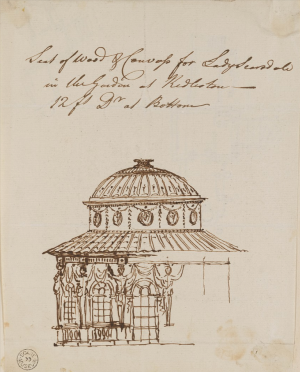 Amongst the Adam drawings that Soane collected are a whole series of garden buildings and paraphernalia for Kedleston in Derbyshire, including a wood and canvas garden seat for Lady Scarsdale, and some designs for ‘a  garden hut for Miss Curzon’

To a modern eye many of these Adam designs, like those of Soane himself,  bear no relationship to their supposed function and so could, from the exterior at least be interchangeable.  How could one know for example that this sketch, thought to be based on the Nymphenburg Palace near Munich that Adam had visited, was actually a scheme for a pheasantry, rather than a bijou country villa ?

More interesting, however, from a garden historian’s point of view are the earlier drawings that Soane collected. 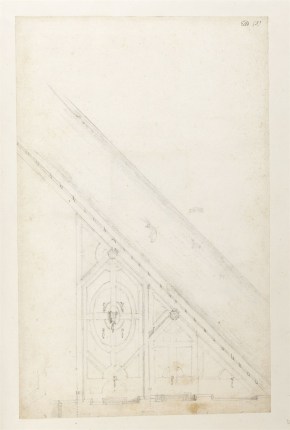 Nicholas Hawksmoor, Sketch plan for a revision to the layout of the southern half of the Privy Garden,
fronting the Thames, 1689
Sir John Soane’s Museum

Amongst them are Hawksmoor’s scheme for redesigning the Privy Garden at Hampton Court. The proposal alters the layout  in the direction of the design that was eventually executed,  developing the southern of the two fountain basins into a prime focal point for the garden. There are extensive notes about the drawing’s significance on the Soane website: 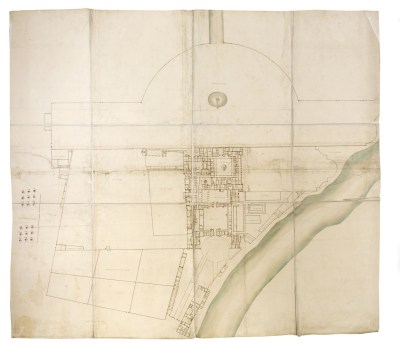 Large ground plan and survey plan of the palace and adjoining gardens, including the south end of the Great walk in Bushey parke, c.1710-11,
Sir John Soane’s Museum

Other Hampton Court drawings include a plan by the royal gardener, Henry Wise, of the palace and its grounds. This includes notes by Wise marking the location of various buildings & garden features including the  Mellon ground; [Te]rris goeing [to the Bowlin]g Green; Bird houses, Vollery ground, Banqueting house, A Garden to the keeper of the privy lodgings, Foreign plants, Auricula Quarter, Orange Quarter, Flower garden, and Privy Garden. 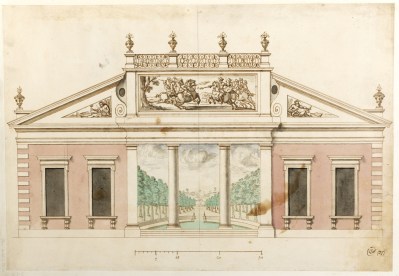 William Dickinson, Revised design for a pavilion on the bowling green, with perspective of vista through portico, 1700
Sir John Soane’s Museum

The Terris going to the Bowling Green was only built around 1700, and at the end of the walk William III commissioned a new pavilion by William Dickinson. This was open in the centre allowing a view through to the garden beyond. These drawings too were owned by Soane. 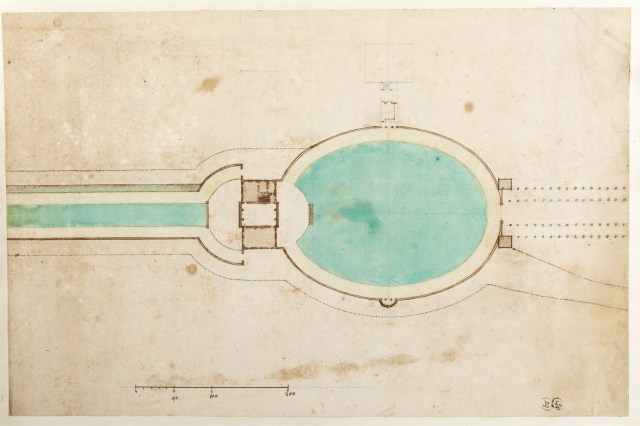 William Dickson, Plan of the east end of the ‘Terrace Walk’, the pavilion and Bowling Green, 1700
Sir John Soane’s Museum 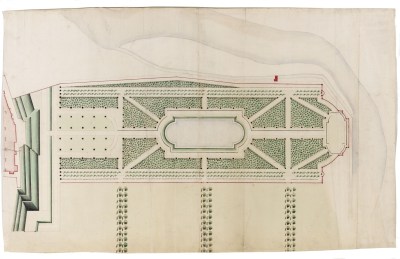 Soane also had one of Henry Wise’s presentation designs for the Maastricht garden at Windsor Castle. It only differs from the final scheme  in details of planting in the lower rectangular lawn area and the absence of fountains in the central lake. The Maestricht Garden was a very large space on the north east side of the castle  – 1722 metres long by 610 metres wide.  In September 1713 Wise submitted  an estimate of £6,874 ‘for levelling, new making and planting a division of ground on the North side of the Castle’ (Green, Henry Wise, p. 83) and work began soon afterwards.  The project was abandoned the following year soon after the death of Queen Anne.

Perhaps Soane understood the importance of London and Wise to garden design because he had several other drawings by them.  This design  for a large, rectangular ‘wilderness’ garden,  curved path in the centre is thought to have been for Lumley Castle in County Durham which London is known to have visited in 1699. 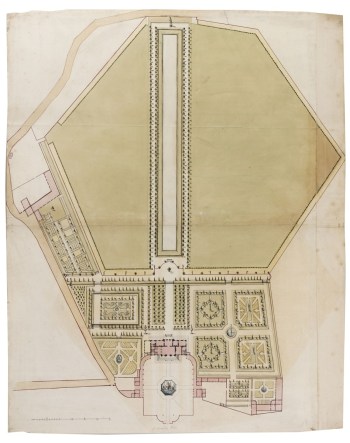 Soane also owned a plan Wise drew a scheme for the gardens of the new Buckingham House which was adjacent to the royal parks where he was in charge.  The main  front of the house was aligned with the Mall on the north side of St James’s Park and  the canal which ran through the garden was, effectively, a continuation of the line of the Mall.

There are also drawings or plans by Bridgeman of the amphitheatre at Claremont; by Kent of the Hermitage at Kew; by James Gibbs of Brampton Hall, the ancestral home of the Harleys; by Talman of Haughton; and by Hawksmoor of alterations to the grounds at Greenwich.

These can all be found on the Sir John Soane’s Museum website and then following the links to the Drawings Collection: 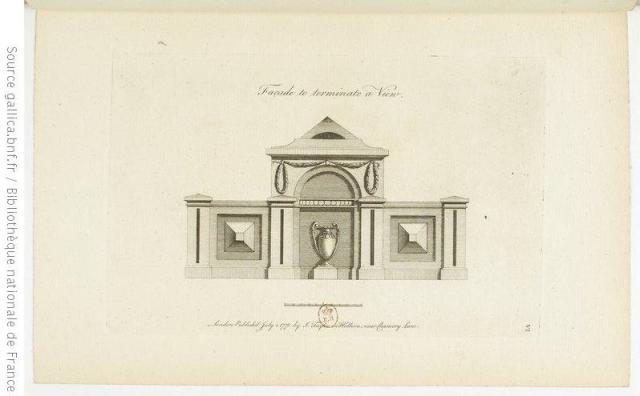