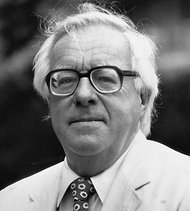 A short article in the newspaper  the other day reminded me of my promise to write about garden tools from time to time.  If you didn’t catch the story then try to guess what sci-fi writer Ray Bradbury and George Bernard Shaw had to do with garden spades… or rather a particular garden spade and why were they all in the news that day?   Answer at the end of this post.

In the meantime here’s some more about the history of humble spade, the tool that’s at the top of every list of historic garden tools.

The expulsion from Eden, of Ely Cathedral
image by Fr Lawrence Lew

The spade started out as a symbol that gardening is officially hard work!

When  Adam and Eve were expelled from the Garden of Eden they were told: ‘Cursed is the ground because of you; through painful toil you will eat of it all the days of your life. It will produce thorns and thistles for you, and you will eat the plants of the field. By the sweat of your brow you will eat your food’ (Genesis, 3:17–19. New International Version).  But of course neither Adam nor Eve knew how to cultivate a garden so they had a lot to learn! 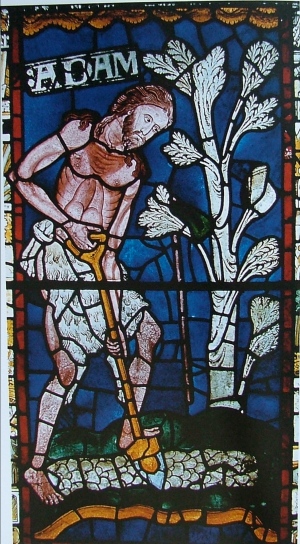 The first representation of a spade I can find is actually part of one of the oldest stained glass panels  in Canterbury cathedral.  It shows Adam hard at work using an iron-tipped spade with a mattock hanging on the branch of a nearby tree. Adam maybe be partially dressed but you’ll notice he isn’t wearing any shoes. 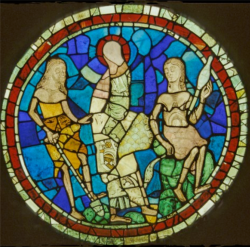 Adam had to be taught how to dig, and Eve how to spin and so an angel [usually said to be the Archangel Michael] was sent down to instruct them. Images of this  were a popular subject in the Middle Ages and it was widely depicted in medieval manuscript illuminations, wall paintings and stained glass.   A window in Lincoln cathedral  depicts the angel demonstrating the art of digging, with one foot resting on a spade in the same manner as Adam, and again barefooted…. 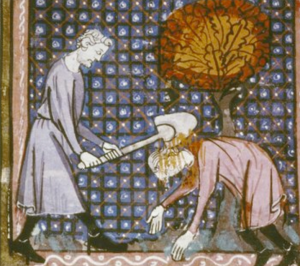 …but by the time Adam’s son Cain was murdering his brother Abel with a handy spade, stouter footwear had been invented!

The earliest spades were made of wood, and were obviously extremely heavy and inefficient to use. The blade was usually edged with iron to give a better cutting edge, and  sometimes (as in the example below) off-set to provide a ledge for the digger’s foot, but most  illustrations have a central shaft.

from The retir’d gard’ner, 1706. This included London & Wise’s translation of Louis Liger, Le jardiniere fleuriste of 1704. 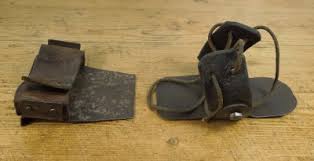 The spade was the gardener’s main tool. The French writer Louis Liger wrote: ‘As a soldier can’t fight without his arms, so a gardener can’t work without proper tools’, although he also suggests that the spade is ‘chiefly used by apprentices’. But by Liger’s time  this heavy clumsy instrument has been improved by making the entire blade of plate iron. It was forged with iron straps  that were bolted to the wooden handle. But this caused problems of a different sort because having an iron blade meant that the metal was going to cut into the gardeners foot as they dug. The solution was either to turn the sharp upper edge of the blade over to form a tread or to strap iron plates  to the gardeners boots or clogs.

Iron tools were very heavy, difficult to keep sharp & liable to rust but,  as technology improved,  by end of 19thc lighter steel blades had been introduced with treads welded to iron sockets and with hollow shanks.

There have been dozens if not hundreds of different kind of spades used in this country – at one point almost every county had its own specialty .

Listen to this description of a spade like shovel in use in the west country. The head Gardener at Bicton near Exmouth described the local spade in 1843:  “their spade is an ugly home-made heart-shaped bit of heavy iron, with a great socket in it; and they form the handle themselves by cutting a great lumbering stick out of a hedge, six or seven feet in length about the size of a hop pole so they can always use it without bending their backs.

A similar sounding spade was used in  west Wales too. Made in a local forge until 1976 they were designed to avoid back-bending work, and were sometimes known as lazy-back shovels. They were also known as the Irish potato spade, the Lurgan shovel and the Celtic shovel.

Then there much more specialised spades of all sorts….here’s just a tiny selection 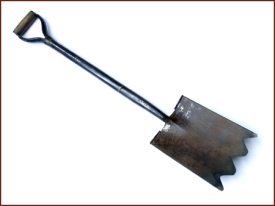 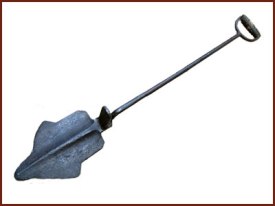 Incidentally have you noticed the different kinds of handles you can get – apparently D or Y handles are the preference down south – but T handles are preferred in the north. Does anyone have any ideas why?

Tools in the potting shed, Wraxall, Somerset
© Copyright Ray Beer and licensed for reuse under this Creative Commons Licence. 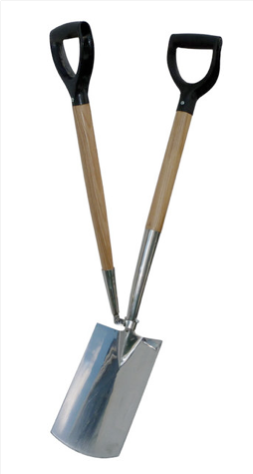 Elsewhere,  no handle grip is the pattern in France and Ireland – but then the French and the Irish like spades with very long shafts unlike the English… we tend to bend our backs when we dig whereas they prefer to rest the shaft on their knee or thigh….and what about the shape of the blade…. flat and square? round-ended? pointed? or even, as the trend is now becoming, just ever so slightly tilted away from the vertical.  The world of the spade is obviously more complex than most of us supposed!

And there still people trying to improve on the spade… how about this two handled version?

Or this an auto spade  which actually dates back 50 years or so to a company called Terrex.

And whatever happened to the mechanical ‘spadet’ complete with sexist commentary dating from 1950 …. 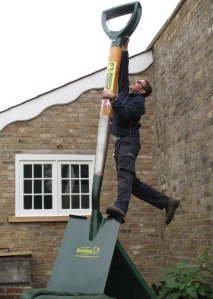 Even today .Spear and Jackson make 25 different sorts, whilst  Bulldog still list over 20  – not including this one which is the world’s largest according the Guinness book of records.  It is 3.61 meters high, and weighs 180 kg.

Now the answer to the question at the start of this post.   George Bernard Shaw’s garden spade, and an unpublished poem by Ray Bradbury that was inspired  by it [I joke not!] are being auctioned in Los Angeles, and expected to fetch about $5,000. According to The Times  of September 24, 2014 (p.26), Bradbury was given the spade as a Christmas present, and ‘delighted to be holding an item that had belonged to his literary hero Bradbury wrote the poem “George Bernard Shaw and the Spade”  to celebrate a man he described as the most important influence in literature….   A metal plaque on the spade says: With this spade Bernard Shaw planted a mulberry tree in the public garden at Great Malvern on his 80th birthday, the 26th July 1936. He then presented to Harry Batchelor Higgs, his gardener and faithful friend for 34 years.’     Here is the poem… Make of it what you will! 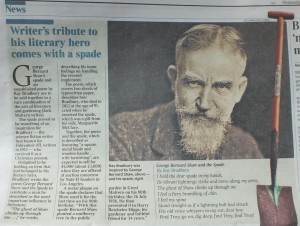 I hold the dear spade in my hands

it’s vibrant lightnings strike and move along my arms,

The ghost of Shaw climbs up through me

I feel a fiery brambling of chin

I feel my spine

Stand straight as if a lightning bolt had struck

His old voice whispers in my ear, dear boy

A selection of spades from the collection of Guilaume Pellerin, image from Suzanne Slesin, Garden Tools, [1996]