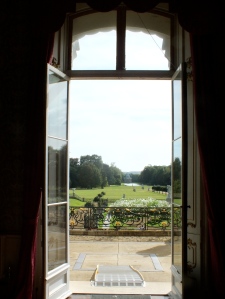 Wrest Park is a rarity.  I’ve heard comments that the house  looks a bit like a mundane French provincial station but, if so, it is a Grade 1 listed French provincial railway station, and mundane on the outside only. Inside it is opulently spectacular (if unfurnished) in the rococo revival style.  But truly splendid though the newly restored interior is, the house is, at once, both overshadowed and complemented supremely by its setting. English Heritage have to be congratulated on the immense progress they have made since they took over the estate in 2006 and initiated a 20 yr restoration plan for what is one of the greatest landscape gardens in Britain.

The house seen from the rose garden
David Marsh 2014

Wrest was designed by Thomas de Grey, 2nd earl de Grey, who was a Tory politician, and brother to the Prime Minister Lord Goderich. He was, in the best gentlemanly tradition, also an amateur architect, and perhaps surprisingly, the founding President of the Royal Institute of British Architects.

The estate at Silsoe in Bedfordshire was home to the Grey family for nearly 700 years with records of a park at Wrest from as early as 1344. The estate, complete with its grand avenues of trees and the Long Water was first recorded by Kip and Knyff in 1707.  Henry Grey, the first Duke of Kent, laid out the formal woodland with bosquets and  geometric clearings  including  the Duke and the Duchess’s  squares, and many statues and other features.

The Duke canalised the various water courses and ponds that lay around the edges of the property.  He also commissioned Thomas Archer’s Baroque banqueting house pavilion that stands at the end of the Long Water, and then  a series of drawings by  Peter Tillemans to document his now much-improved estate. 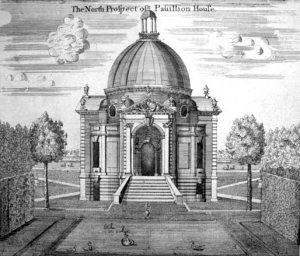 After that the grounds were again altered in a more informal style with work by both Batty Langley and Thomas Wright, and the estate again recorded by John Rocque in 1737 with views of all the major gardens buildings.

Work continued slowly after the death of the Duke in 1740 until in 1758 Capability Brown began work, although this time more gently than was often the case. Amabel Grey, the then owner, wrote that Brown was obviously impressed by the “mystery of the garden” and “in short did not think that any material Alteration could be made anywhere unless the whole Stile of the Place was changed.” Luckily nothing was materially altered, apart from modifying  surrounding waterways.

There were no further major changes until the 1830s when Thomas de Grey, the 2nd earl, demolished the existing mansion, and built a new house,  much further to the north, almost twice the distance from the Long Water. The new perspective necessitated the construction of extensive new terraces with parterres in the French manner. More importantly, however, he left the rest of the  gardens and  wider grounds almost untouched.

This means that as you explore Wrest Park’s  90 acres, largely enclosed by what were once formal canals that were later modified by Capability Brown, you can see almost the entire evolution of English landscape and garden design from the Baroque to High Victorian. There was little pandering to fashion. Instead  of  modifying or even obliterating earlier gardens in  the pursuit of horticultural modernity, at Wrest Park each generation respected the work of their predecessors.

This post is not intended as a full, or even potted history of Wrest Park, but at the end there is a list of  suggested further reading if you want to pursue things further.  Instead this is a quick “walk around” the site to give you an idea of what you are missing if you’ve never been, or haven’t been since the restoration got underway.

Entry to the estate is now via the former walled  kitchen gardens, where the usual array of visitor centre, cafe, children’s playground and car parking have been slotted into two sections of the six acre site. They all work well, being unobtrusive and sympathetically planted.

This means that the house is approached end-on, rather than through its main “state” entrance or even one of the doorways onto the terrace.   This is unfortunate because it reduces the impact of the interior and  gives the impression that you are entering by a servants doorway. However, it does mean that visitors get the chance to appreciate the stunning Italian garden. Although not on the scale of Waddesdon’s parterre, the planting here is so good that it will convert even the toughest sceptic to loving Victorian bedding, especially as the scent of heliotrope fills the entire area.

From the house there are extensive views across the French-style parterre, the Long Water and down to the domed Banqueting house. But it’s only when you start exploring the grounds on foot that you get a real sense of the scale and complexity of the gardens.

Walking out onto the terrace the garden opens up to a 180 degree panorama. De Grey commissioned a striking French garden, with scrolled box-edged flower beds planted with annual bedding and dotted with classical statues. We are used to such things but de Grey wrote “The pattern of the French Garden is certainly rather out of the common course. Whether it will produce the good effect that the fertile brain of its author has contemplated remains to be seen; but at all events it is original and novel and not as yet hackneyed and common place.”  The restoration has reinstated the  complexity of the original design and is dramatic seen from the terrace, especially given this year’s planting scheme which has the added advantage of height and airiness, and creates a completely different feel to the nearby Italian garden. 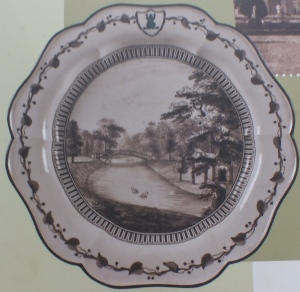 The original Chinese Bridge, painted by the Countess for the Green Frog service
Taken from a display panel in the Bowling Green House

Following the central walk lined with tubs of clipped Portuguese laurels  towards  the Long Water you reach a circular pond, surrounded by statues, and are offered a choice of directions to continue your exploration of what is known as the Great Garden.  One path leads through the woodland edge to the rebuilt ‘Chinese’ bridge. The original featured on the Wedgwood Green Frog dinner service for Catherine the Great [see post of 26th Sept]  and a view across the canal to the Chinese temple, and then onto the woodland walks. 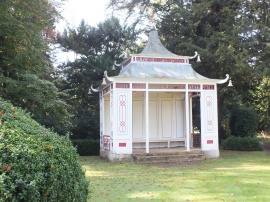 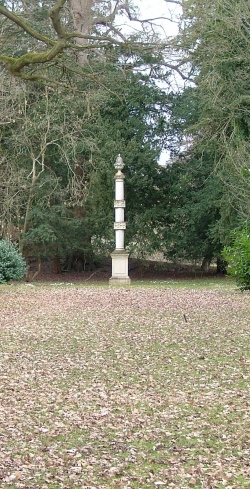 The woodland areas are full  of hidden features.

There is  the Dogs’ cemetery, with its collection of headstones grouped around a favoured canine’s tomb.

Nearby stands a rustic column commemorating Capability Brown inscribed: “These gardens originally layed out by Henry Duke of Kent were altered by Henry Duke of Hardwicke and Jemima Marchioness Grey with the professional assistance of Lancelot Brown, 1758, 1759 and 1760.”  This was has been rebuilt after its demolition by a falling tree in the 1990s. 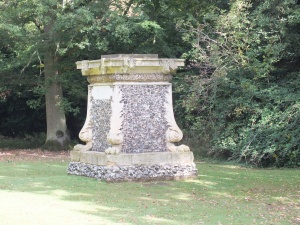 There are a collection of antiquities, such as Roman altarpieces  and faux antiquities, such as the Mithraic altar with its fake inscriptions, which was put up to fool guests, and amuse the earl and countess. There are several memorials and other monuments, and in the eastern and western sections of the woodland stand two small Half Houses, concealed in the shrubbery and containing benches to rest on. 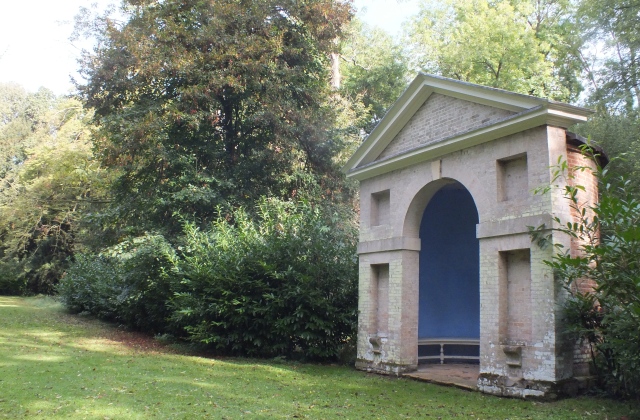 Towards the further edges of the woodland you get glimpses of the Archer pavilion  which sits close to the canal.  Built of red and cream brick with stone ornamentation, it must rank as one of the finest garden buildings in the country.  Inside there is one large ornately muralled room rising into the dome, with alcoves off it, and narrow staircases leading up to two tiny plain rooms. Underneath is a large whitewashed kitchen space. 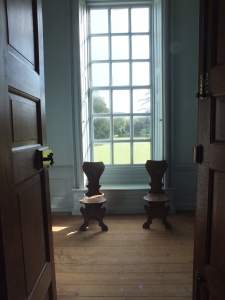 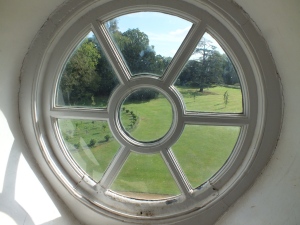 View from one of the upstairs room

On the return to the house you pass the Duchess’s Square, complete with a statue of a female figure reading, before arriving 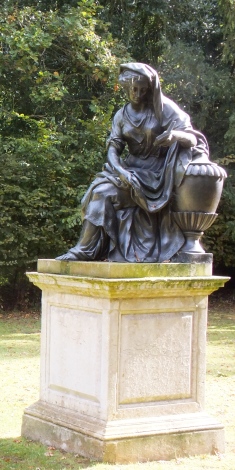 at Leg O’Mutton lake and the Amphitheatre, which looks out on newly replanted American garden and the Bowling Green House. 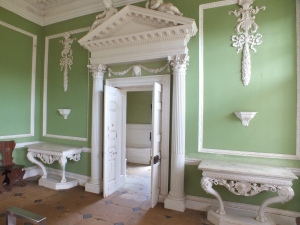 The interior of the Bowling Green House
© David Marsh 2014

The Orangery, built by Grey in the same French Renaissance style as the house,  sits on a terrace that covers the stovehouse, and end-on to the American garden. It faces a wide cross axial walk down to the round pond where the woodland walk starts. 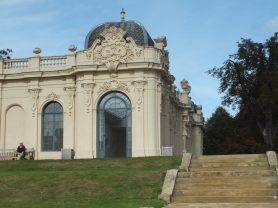 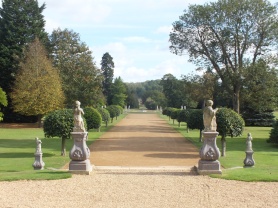 Behind the orangery on the start of the canal is the rustic thatched bathhouse, built between 1769 and 1771. Built of ironstone,some smooth and some “more roughly hewn, it consists of an octagonal outer chamber and a circular pool room.

Like many other great properties of its kind Wrest has  had a more chequered recent history. It became a military hospital in WWI, but when the last of the family was killed during the conflict it was sold to a wealthy industrialist.  The valuer for the sale noted how it had declined: “Outbuildings not used and half quite useless. … Grounds too big and not kept up except portion in front of terrace.”

The new owner did little but sell a lot of the woodland trees for timber and in 1939 sold the estate to the Sun Alliance Insurance. They used the house as offices during the war but sold it to the Ministry of Works in 1949. Wrest was then leased to the National Institute of Agricultural Engineering, who carried out research into food, farming and environmental management. The Institute finally closed in 2006 and at that point English Heritage took over.

English Heritage devised a restoration plan stretching over 20 years which in many ways broke with established principles of restoration, by not attempting to restore the garden to one great heyday period. John Watkins, their head of gardens, said that the question he was most frequently asked at Wrest was, “What period are you restoring it to?” but always replied that was simply the wrong question to ask in the first place.

Instead English Heritage have taken the view that the de Greys lived with the schemes carried out by previous generations,  adding to them rather than sweeping them away.  Their plan is now to restore the constituent parts to their own heydays, and it has proved very successful. The early 18thc woodland with its newly cleared and tidied avenues and walks looks stunning. The surrounding canal that not even Brown interfered with too much has been drained and dredged and then left alone. The Italian garden is a polished gem of a space. The American garden too looks like being a great success. As Tim Richardson remarked in the Telegraph [11 June 2011] when the first round of restoration was complete: “this all-encompassing attitude has an appealing humility.”

Simon Thurley, English Heritage’s chief executive, said: “Wrest Park tells the story of England’s love affair with landscape. It is a unique place capturing 300 years of gardening history….”  and goes on, I think very justifiably, that Wrest Park can now “rightfully reclaim its place as one of the great gardens of England.” 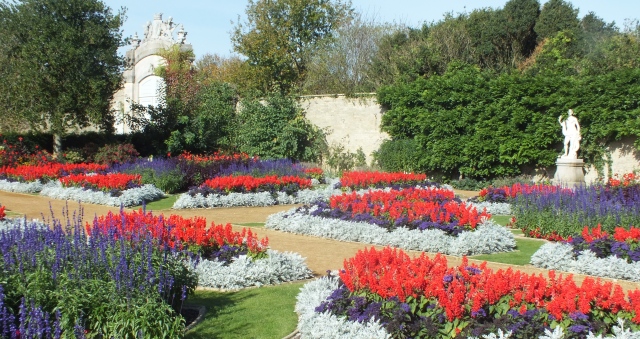 If you want to know more about Wrest then our database has a good potted history.   English Heritage have a lot of information about the restoration and the history of the house and garden on their website, and you can even sign up for a blog written by the small garden team. Bedfordshire County Archives have, amongst other things, a useful guide to each building and many of the monuments and ornaments on the estate as well as a lot of other background information.