Menageries 4: Knowsley and the mad botanicals 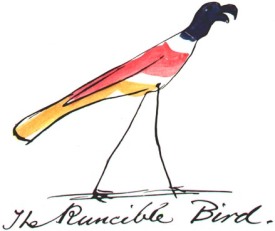 More on menageries….real and imaginary. The early 19thc saw a shift from menageries as showcases for curiosities to the beginnings of the zoological garden as a base for science. At the same time that the royal menagerie in the Tower was being transferred to Regents Park, and the Duke of Devonshire was enjoying his mini-zoo at Chiswick [see earlier posts in July & August] Edward Stanley, later 13th Earl of Derby was building the greatest private menagerie in the country on his family estate at  Knowsley near Liverpool.

from a letter by Edward Lear to Evelyn Baring, 1864, from Edward Lear: Selected Letters, ed by Noakes 1988.

His menagerie did not, however, include a quangle-wangle, pobble or  a bearded and bespectacled snail….or even an owl and a pussy-cat or a runcible bird. They were to be  added later!

Stanley was a scholarly but enthusiastic naturalist and he extended the existing small aviary and menagerie at Knowsley  until it  eventually occupied 100 acres of land and  70 acres of water.   He built up a network of agents all over the world to supply him constantly with new and exotic species which were looked after by about 30 staff. He even financed several private expeditions to Scandinavia, Honduras, Hudson’s Bay in northern Canada and the southern and western coasts of Africa. He also served as President of   the Zoological Society of London. 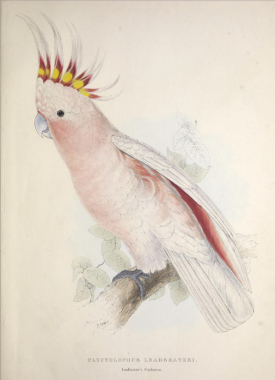 Leadbeaters Cockatoo from Lear’s Illustrations of the family of Psittacidœ, or parrots, 1832

Even such an enormous collection could have gone the same way as the Duke of Devonshire’s at Chiswick…. vaguely remembered but not celebrated. But the earl was keen to have a proper scientific record of  his activities and interests and he decided to employ an artist to depict everything with great accuracy.  The Zoological Society was already beginning a similar project and had employed a young self-taught artist named Edward Lear to make drawings of some of its collection, particularly the parrots. 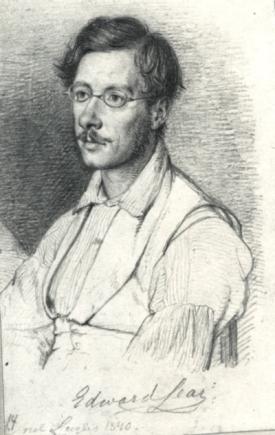 Although Lear is now best known for his nonsense verse and for his cartoons he was, even at the age of 20, also a very talented artist, as can be seen from the 42 of his parrot drawings that were published in 1832 as Illustrations of the Family of Psittacidae.  Stanley promptly invited Lear to Knowsley to record his collection, and Lear was to spent the next 5 years intermittently on the estate.  Much of his work was then published in 1846 in Gleanings from the Menagerie and Aviary at Knowsley Hall, a book paid for by the earl. 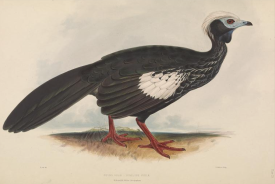 from Gleanings from the menagerie and aviary at Knowsley Hall, 1846

Lear was unusual in that he drew from life, unlike his American counterpart John James Audubon who, although he often observed the birds in their natural habitat,  had them  killed before he drew them!  The great pity, from a horticultural or botanical point of view, is that Lear did not take the same, or indeed any,  real interest in the plants on the estate.  Why is not clear because the earl was clearly interested in botany and gardening as well as birds and animals. As can be seen from the advert below, he actively collected exotic plants, and his gardener  contributed advice [signed WK]  to Gardener’s Chronicle on how to grow exotics such as Torenia asiatica.   However….. 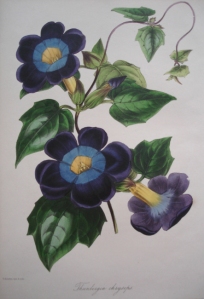 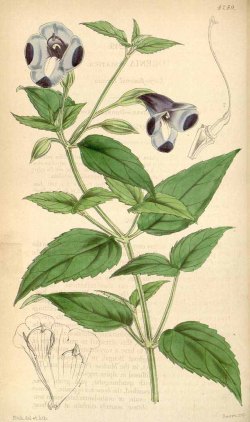 …. the gardens and hothouses, lush and splendid though they undoubtedly were, are unlikely to have contained the exotic manypeeplia, rare arthbroomia or even the unusual variety of tiger lily that Lear drew.

Lear obviously knew about the earl’s botanical interests and referred to them in their correspondence. For example, Lear wrote to the earl from Rome in 1838 telling him about the Grand Duke of Tuscany’s menagerie at Florence, but also that “the flowers and plants in all these places are delightful: &, if your Lordship likes, I will make a dry collection of those found at the Coliseum: cyclamens often grow wild, & on top of Augustus’s palace…the wallflowers have been blooming all through the winter and the aloes and figs are in high luxuriance.”  He also mentions meeting ” a great collector of seeds – particularly pines” and suggests that “when he returned a communication might be of use to the Garden at Knowsley.” 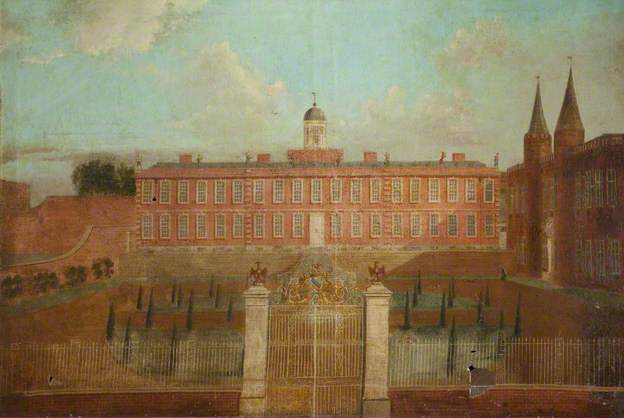 The gardens have always been an important part of the Knowsley Estate. In the seventeenth century they had consisted of a series of formal terraces, but these were swept away in favour of  landscaped gardens designed by Capability Brown in the mid 1770s. Now they are mainly great expanses of  grass with groups of trees, and are enclosed on the east and south sides by a series of small lakes, some of which like the White Man Dam date back to the 1720s.  William Gilpin is also supposed to have been involved with more alterations in the 1830s. There is a detailed description of the grounds on our database: 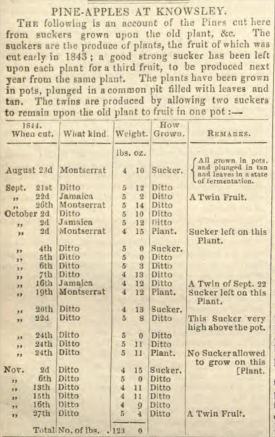 Brown’s account books  also mention ” a new kitchen garden”and by the early 19thc there were also  several conservatories and stoves, including a large collection of pineapples.  The pineapple harvest and cropping methods were reported on  by Gardeners Chronicle in 1844.

The garden was also a magnet for gardeners in training, even from overseas and in the 1870s Hans Jancke, a court gardener at the Prussian court at Potsdam, wrote a journal describing his year’s apprenticeship at Knowsley. Only recently published it contains an extensive plant list and detailed descriptions of the routines and practices of the estate’s kitchen gardens and greenhouses as well as several plans and illustrations. 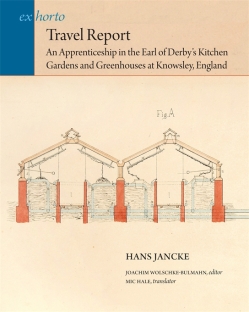 On his arrival at Knowsley Lear was initially treated as a middle-ranking member of staff, but the story goes that the Stanley children kept making excuses to vanish from the dining table, the earl discovered it was because of  the funny man downstairs.  Lear recalled the Earl coming to the top of the stairs which lead down to the servants dining room and shouting “Mr Lear, Mr Lear, come up here!” From then on he dined as a guest.   Certainly his years working at Knowsley introduced him to “half the fine people of the day” who were later to buy or commission paintings from him.  Entertaining the earl’s grandchildren, must have honed his bizarre sense of humour & it led in time to the publication of a string of comical books, starting with A Book of Nonsense in 1846.

Sadly, however, there was a downside to working with such intense observation: his eyesight deteriorated badly  and he was forced to switch his artistic focus from closely observed and detailed natural history to landscape.   Lear spent most of the rest of his life abroad, painting and writing as he travelled round Greece, Albania, and the Levant, as well as visiting India. He finally settling in San Remo where he died in 1888.

Luckily Lear was a copious correspondent, writing regularly to the earl asking for news of the estate…”it would please more than I can express to learn if the green plot before the stillroom window and up to the trees by the chapel, is yet turned into a flower garden.” Whenever he did return to England he was always welcomed at Knowsley by the family: “English people do go on with friendship just where they left off, as you go with a book at the last page you read.”  If you want to know more many of his letters have been edited by Vivien Noakes in Edward Lear: Selected Letters (1988) and there is a good biography simply entitled Edward Lear  by Peter Levi (1991). 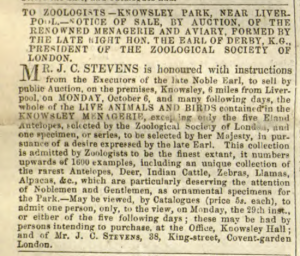 The 13th earl  died in 1851 and since his family did not share his passion, the famous menagerie was quickly auctioned off. The catalogue  listed 345 mammals from 94 species, and 1272 birds from 318 species, many of which had been bred at Knowsley. 60 of the creatures ended up in Regents Park and the rest were dispersed. 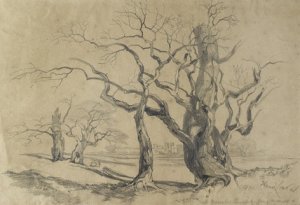 After the earl’s death his son carried on acting as Lear’s patron, and then in turn his grandson, the 15th earl, who he had entertained as a child in nursery, also  commissioned work. Towards the end of Lear’s life the 15th earl  invited him to “come over this spring and bring  roomful of work with you. There is still space at Knowsley for a few more of your drawings, though I have a pretty good stock already.”

Whether Lear’s mad botanical drawings were amongst them we don’t know but I hope they still make you laugh, as it made the children he drew them for laugh then. And if you’d like to see more of Lear’s botanical  drawings then a good place to start is: