Mounds & Mounts 2: the heights of fashion

Last week’s post showed how earlier landscape features such as tumuli and castle mottes were reused to create prospect mounds in gardens.  But by the mid-16thc mounts were also being deliberately constructed to gain a view not only over the garden but the surrounding countryside.   It was a reflection of the way that the architecture of great houses no longer needed a military defensive role, and instead of being  inward-looking  could become exuberantly outward looking.

While some of these new mounts followed a “traditional” conical form rather like a castle motte, others developed more pyramidal forms while others were “stepped.”  Although they could sometimes be climbed by stairs,   it was more common  for them to be like the one recorded at Wressle Castle by John Leland in his Itinerary (1539):  “a mount writen about in degrees like turnings of cokilshells to come to the top without payne.” This spiralling type, for obvious reasons, would come to be known as a ‘snail mount.’

A stepped mount on Bishopsgate, from the Copperplate map c.1558

The Copperplate Map – the earliest proper map of London – of c.1558 has a wonderful stepped example  topped by a tree in a garden on Bishopsgate, just outside the walls of the City of London.

Around the same date is the spiral mount at William Cecil’s house on the Strand which is shown on the  plan of the garden which is thought to be dated 1562-5.   Set in the far corner of the garden it would have not only looked out back over his own land but also over the neighbouring fields of Covent Garden [For more on this see Jill Husselby & Paula Henderson’s article in Architectural History.]

There was also a prominent mount   at Holdenby in Northants, the home of Cecil’s fellow courtier, Sir Christopher Hatton. It occupied a very prominent position close to the house and can be seen shown on Ralph Treswell’s Survey of the estate. 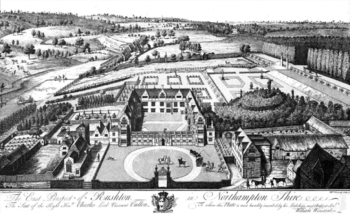 Hatton’s friend and neighbour, Sir Thomas Tresham, raised snail mounts at both of his Northamptonshire houses. At Rushton, as at Holdenby, the mount was close to the house, and if the   only image of it is to be believed it was substantial in size and height. 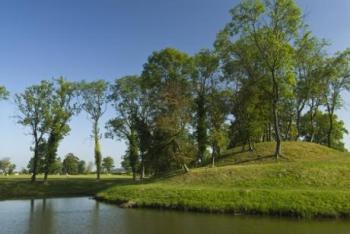 One of the snail mounts at Lyvden New Bield,         National Trust

Since  Tresham was a prominent catholic gentleman, it is quite likely that, like the rest of his garden they had symbolic significance as well. [One of these days I’ll write a post about him and his gardens.] Neither the house nor garden was ever finished as Tresham died in 1605 and his son was implicated in the Gunpowder Plot and died in the Tower the same year. After centuries of neglect a slow process of conservation and research by the National Trust has shown Lyveden to be one of the best preserved, and most intriguing, of Elizabethan/Jacobean  gardens, and the mounts must surely be the most photographed in the country.

One of the snail mounts and the Lodge at Lyvden New Bield, National Trust 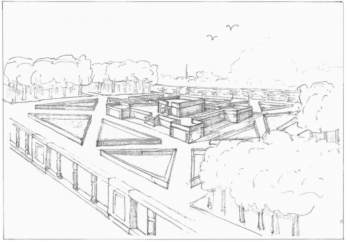 Conjectural reconsruction of John Smythson’s House-Plan Mount and the ‘Newe Orcharde’ garden. Drawing by Pete Smith from his article in Garden History

At Wollaton, just outside Nottingham,  Robert Smythson designed a wonderfully complex mount in the shape of the house itself for  Sir Francis Willoughby between 1580 and 1588.

Schematic diagram of John Smythson’s plan of the House-Plan Mount at Wollaton. Drawing by Pete Smith from his article in Garden History

At 2/3 of the scale of the building it was vast! It was on 2 levels and surrounded with low brick walls and hedges and although it is likely to have only been  5ft or so high it would have offered long views over the valley and back towards the house. It may well also have been used as a stage for entertainments.

Robert Smythson also drew another complex garden plan that this time included no fewer than 4 mounts. Twickenham Park was owned by Lucy Harrington, Countess of Bedford but she had bought it from Francis Bacon and it was he who had laid the gardens out in the 1590s.

Scale plan of the house and gardens at Twickenham Park by Robert Smythson, 1609
Architectural Library,RIBA

The two mounts at the top of the plan are simple circular platforms, thirty feet across reached by a set of 11 steps. The other two are more complex. They are larger and have two levels. The lower forty feet across, reached by 7 steps and with 3 small circular extensions, and an upper level, twenty feet in diameter, a further 4 steps up.  The design differs from Bacon’s later comments in the essay “Of Gardens” [1625] that a proper garden must have: had ‘in the very middle, a fair mount, with three ascents, and alleys, enough for four to walk abreast; which I would have to be perfect circles…and the whole mount to be thirty foot high.’

from William Lawson’s A New Orchard and Garden, 1618

There are four corner mounts too in William Lawson’s ‘overall plan for the form of a garden’ in his A New Orchard and Garden of 1618.  They are elegantly topped with flag-flying pavilions. Lawson also gives advice  on their construction in humbler gardens: ‘set it round with quick [a hawthorn hedge] and lay boughes of trees strangely intermingled, the tops inward, with the earth in the middle’ – i.e. a skeleton of branches provided the framework for the mount. Lawson also remarked that ‘if a river run… under your Mount it will be pleasant’ and  ‘you might sit in your mount and angle a peckled trout, sleighty eel or some other daintie fish.’

Mounts seem to have been particularly popular in Oxford. At least three colleges had one in their gardens, notably including the surviving one at New College.  College accounts show that it was begun in 1594, when £3 was spent on it. Twenty years later another £5 was specially voted for the “making up”, significantly, “of ye Mount”, with more money spent in the early 1620s and again in 1634. However the mound was not finally ‘perfected with stepps of Stone and setts for ye Hedges about ye walke’ until 1649. Karen Seeber in an article about it in Garden History in 2012 argues that it was substantially enlarged on the orders of Warden Robert Pinck and served as a  “symbolic viewpoint” for the cause of the  Charles I who had his headquarters in the city, and was thus more than just a prospect mound but also a military monument with strong royal connections.

The New College mount is 30ft high and more than 60 ft wide. Pyramidal in shape with a flat top, it rises as high as the medieval defensive walls and bastions that still surround the college. It once overlooked four elaborate beds in which clipped evergreens showed the arms of the King and the motto of the then-male college, “Manners Makyth Man.”

Robin Lane Fox, the Garden Fellow at the college has written an article [Financial Times 13th Jan 2013] suggesting that it was not just a military symbol but had perhaps been intended as a Mount Parnassus [of which more another day!]  He also recounts how once it had become overgrown it became more of a Mount of Venus for the undergraduates!  The trees and shrubbery were partly cleared away in the 1990s and a stone staircase installed on the front slope. Unfortunately, from a purist point of view, the mound is still almost unrecognizable as the feature in the 17th and 18thc engravings.  You can read Robin Lane Fox’s article in full at:  http://www.ft.com/cms/s/2/9faccdb4-5a75-11e2-a02e-00144feab49a.html#ixzz3lcX6twC4

Just up the road at Exeter College in 1631, a survey by Rector Prideaux  noted “This mount was begun with the earth and rubbish thrown from the inlarging of the sellar under the old hall in Dr Hollands tyme but of late was continued to the garden walke.”  College accounts show the cellar was enlarged in 1604 and in 1605 a lot of work was carried out in the garden including £6 13s. 6d  ‘on improving the garden and the mount in the garden.’  The following year a further 2s. 6d. is spent ‘on a flight of steps for use on the mount in the garden’, and 19s. 1d. ‘on trees, workmen’s wages, and other things to be constructed in the garden.’   The mount was extended in 1617-8 as an obvious way using the spoil from the excavation of cellars under the new college hall.  It had benches and a summer-house on top.

The Exeter Mound is still there offering views out over Radcliffe Square and the college gardens.  A much fuller account of its history can be found at: http://www.exeter.ox.ac.uk/sites/exeter/files/publications/register-14.pdf

A few decades later at nearby Wadham College Warden Wilkins (1648–59) created a  small formal garden of formal rectangular beds  around a  mount about 16-18ft high,  this time  topped  by a balustrade and statue of Atlas.

Wilkins was a mathematician as well as a future bishop, and was to become the first Secretary of the Royal Society which might explain why elsewhere in Wadham’s gardens there were also a number of mechanical contrivances, although they would also undoubtedly amused the distinguished set of natural scientists at the college who included a young Christopher Wren.  Amongst them were a talking statue, a rainbow-maker, and glass beehives.  Wilkins also experimented with flying machines in the garden!  Sadly Atlas was blown down in a storm and then the mound itself was cleared away in 1755 when the gardens were completely remodelled.

The late 16thc/early 17thc was the heyday of the garden mount but as the 17thc progressed so their popularity went into decline and by the early 18thc hardly any new ones were built, although those that were were impressive.

detail from Jan Kip and Leonard Knyff. Wanstead: view to the east c.1712-15

George London carried out alterations at Wanstead for Earl Tilney between 1706-13 which included creating formal parterres, two large canals, a bowling green, wilderness areas,  a large orangery, and a banqueting house and two mounts.  A poem of 1713 refers to the snail mounts ‘now raising’, with an ‘artful spiral Circle round.’ For more on Wanstead see the report of Sally Jeffery’s lecture to the Friends of Wanstead Park at:

detail from The Mount and Revolving Summer-house by Bernard Lens, 1736 taken from Revolving Architecture
By Chad Randl

Charles Bridgeman was probably the last important designers who used the mount as a prominent design feature.  The Prospect Mount in Kensington Gardens, was constructed for Queen Caroline  in 1730-31 using spoil from the excavation of the Serpentine to create a conical hill about 13 metres high. In 1734-35 a revolving summer-house, probably designed by William Kent, was built on the summit. 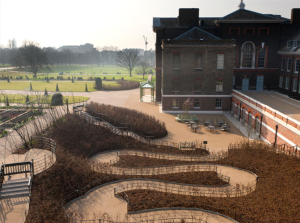 Tree and shrub growth eventually completely obscured the view and the mound was levelled, probably by 1784 and certainly by 1836.   The recent restoration of the palace surrounds by Todd Longstaffe Gowan and James Fox drew on a lost Bridgeman bastion,  to raise a new mount on the north side of Palace Lawn.

As both our database, and Pastscape, the database of Ancient Monuments maintained by Historic England, show there were plenty of other mounts and mounds around the country. However, little appears to be known about many of them and a large number are no longer extant.   After Bridgeman’s mount at Kensington  I have been unable to find any examples of new  constructions until the start of the land sculpture movement. It would be good to be proved wrong and discover that there are lots of later mounts ornamenting our historic parks and gardens. I look forward to hearing all about them!