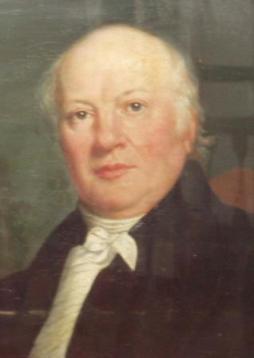 We tend to think of gardeners being poor – unless of course they’re celebs on the box – and it’s hard to think of many gardeners in history who became rich.  But there are exceptions and one such was Joseph Knight who had a nursery in Chelsea for nearly half of the 19thc. He sponsored plant hunting expeditions, built a large Italianate mansion for his retirement, and paid for the construction of several churches, schools and almshouses. And he was a good salesman as well as a good gardener…and amazingly for a Victorian  he didn’t have a big bushy beard! 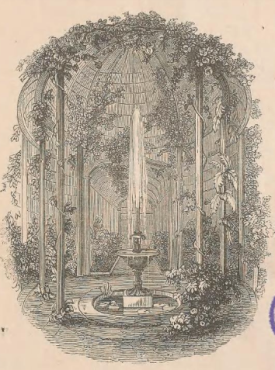 from the title page of The Floral Cabinet and Magazine of Exotic Botany, vol.2, 1838

His showroom must have been spectacular: “The effect on entering is excellent; the termination of the telescopic vista being the bronze vase with its jet d’eau backed by two splendid plants of striped camellia covered with bloom, through which appears enough of light to give the idea of continuation. The bronze vase which is 6 ft in diameter and weighs several tons, is painted blue on the inside, and has a very cheerful and elegant appearance.” So said John Claudius Loudon on visiting in 1831.

So who was Joseph Knight? And why has he been forgotten?  Read on to find out… 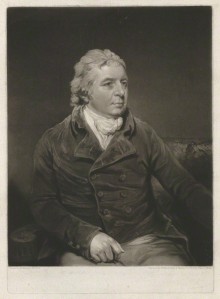 Born in Lancashire in 1778 Joseph Knight began his professional life as a gardener to the Duke of Bedford at Woburn, before becoming head gardener to George Hibbert, the immensely wealthy sugar magnate and founder of the West India Docks, who was also an enthusiastic amateur botanist. Both the Duke and Hibbert became very interested in plants from the newly opened up Cape Colony, to the extent that the Duke built special houses for them at Woburn, whilst Hibbert sponsored several plant hunting expeditions including that of James Niven between 1798 and 1803. According to John Claudius Loudon’s 1835 Encyclopedia of Gardening: ‘The collection of heaths, Banksias, and other Cape and Botany Bay plants, in Hibbert’s garden, was most extensive, and his flower-garden one of the best round the metropolis.” 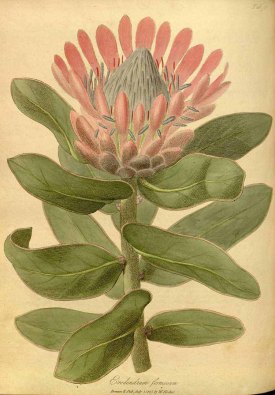 James Knight was obviously equally taken by these exotic imports and became adept at their cultivation and care. He was particularly taken by proteas, a diverse family of plants almost all indigenous to the Cape region, and which  Linnaeus had named in 1735 after the Greek god Proteus who could change his form at will.  Knight was probably the first gardener  to propagate proteas in Britain, and In 1809 he published On the cultivation of the plants belonging to the natural order of  Proteeae.

In fact the book was not really about their cultivation and care at all, but their taxonomy [ie their classification, and naming]. Knight probably contributed the 13 pages on how to grow them, but the other 100 or so pages was the work of Robert Salisbury.   Salisbury’s contribution  led to a major dispute in the small world of botany, because he was accused, quite correctly, of plagiarism. In 1809 one of Joseph Bank’s assistants, Robert Brown, had given a lecture based on his shortly-to-be-published book On the Proteaceae of Jussieu to the Linnean Society. Salisbury was in the audience, took notes and memorized essential material and as a result he and Knight were able to beat Brown to print and thus claim the credit for the names that Brown had given to the various new species. 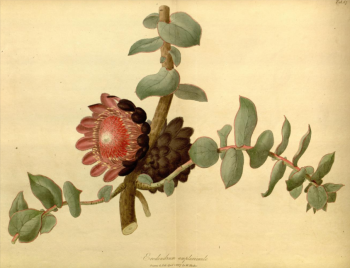 In the scientific world then as now plagiarism was unforgivable, and this was plagiarism of the most blatant kind. Salisbury was ostracized. The founding President of the Linnean Society, Sir James Smith,  reporting angrily that he had a copy of Knight’s paper “but shall not keep it — I mean hereafter not to notice it or any other of the author’s productions.” Samuel Goodenough, the Bishop of Carlisle, and vice-President of both the Linnean Society and the Royal Society wrote:  “How shocked was I to see Salisbury’s surreptitious anticipation of Brown’s paper on New Holland plants, under the name and disguise of Mr. Hibbert’s gardener! Oh it is too bad!… I would not speak to him.” Brown himself wrote of Salisbury “I scarcely know what to think of him except that he stands between a rogue and a fool.” [Pleasance Smith [ed], Memoir and Correspondence of the Late Sir James Edward Smith, 1832]

Luckily Joseph Knight was neither a rogue or a fool, and did not share the same fate, and he is now considered the original describer of a great many Proteaceae species. 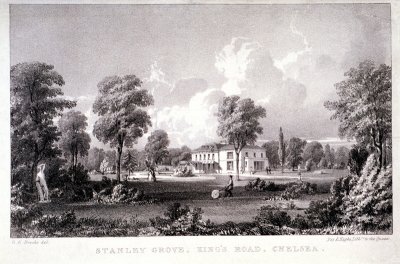 The previous year, 1808, Knight bought part of the grounds of Stanley Grove in Chelsea. This was the former London suburban home of the earls of Derby but had been sold on and then rented out for many years.

Knight converted the gardens into a plant nursery but very quickly realised their potential as a prime site on the Kings Road and turned them into horticultural showrooms instead.  He then acquired more land across the river in Battersea and  outside London as well to actually grown his stock. One of his workers was Michael Rochford who was to go on and start the famous houseplant nursery. [see  Rochfords: the start of a dynasty., March 2015] 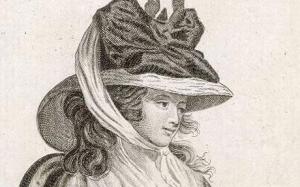 As a fascinating red herring you might be interested to know that Knight was not the first serious gardener on the site.  A previous resident of Stanley Grove was the Countess of Strathmore who, apart from having an ‘exotic’ lifestyle [to put it mildly] was also an enthusiastic botanist. In the 1780s she built extensive hothouses and conservatories for her collection of  newly fashionable Cape plants.  However, after the earl died  she was tricked into remarriage. Her new husband was altogether a nasty piece of work, and “the cruel spoiler, threw them, like loathsome weeds, away” [Croker, AWalk from London to Fulham, 1860]. Their famous divorce case was acrimonious and made the front pages of the scandal sheets so it is worth reading more! There is a good summary of the unfortunate countess’s story on the wonderful blog of Professor Hedgehog. 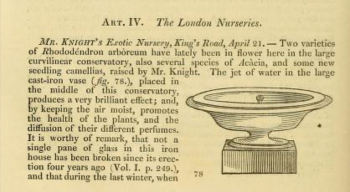 Back to Knight… The Chelsea nursery proved a great success  and was regularly reported on by Loudon in The Gardener’s Magazine.  The range of plants he offered was described as “rich and superiorly managed” in 1828, and by 1829 he had erected “a splendid conservatory” using the iron sah bar construction which was Loudon’s own invention. There is a very detailed account of the following year which can be found at:

It had an elaborate heating system and there were several other buildings, housing camellias, orange trees, evergreen exotic shrubs, acacias, rhododendrons, and many plants from southern Africa and elsewhere.

The collection was said to have become ‘so much increased, that it is now one of the most respectable in the vicinity of London’. It included alpine plants, hardy herbaceous plants in open borders, many rare shrubs, and fruit trees, and there was heating for tropical plants. Pineapples and fuchsias were also among early specialities; conifers later became prominent in his collection, of which he published a catalogue in 1840 with 140 species and varieties.

When his former employer George Hibbert retired around 1829, he gave his plant collection to Knight.   By then Knight was wealthy enough to follow Hibbert’s example and begin sponsoring plant collectors himself, and most famously he became one of the leaders of the consortium of London nurserymen who subscribed to send William Baxter to Australia. On Baxter’s return in 1833 Knight “became the purchaser, at, it is said £1500, of the seeds and plants” that Baxter bought home. 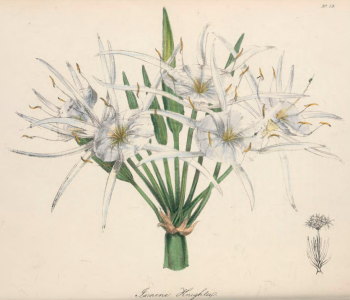 Ismene knightii, from The Floral Cabinet and Magazine of Exotic Botany, vol.2, 1838

In the 1830s Joseph also sent his nephew Henry Knight to collect plants in Florida and Alabama [Desmond p.406] which led to the introduction of Ismene knightii  [Floral Cabinet v2 1838] .  The plate was drawn from the specimen growing in Knight’s nursery. Indeed plants in Knight’s nursery were often used as the exemplars in botanical magazines.

Knight was also one of the nurserymen invited by Paxton to share in an North American expedition for the Duke of Devonshire. This was the expedition of Robert Wallace and Peter Banks who, in 1838, were sent by Paxton on a long and dangerous route across Canada and ended up in 1839 being drowned in the Columbia River.

Such sponsorship  was a sign of how profitable the nursery trade could be and as Loudon said “the curious in botany and exotic culture both in this country and on the continent will look with anxious expectation for the new productions contained in this collection.”

In 1834, Loudon’s Gardeners Magazine carried a 5 page report of Knight’s tourof northern France and Belgium where he comments on the agriculture and horticulture he encountered, as well as short accounts of the major gardens. Loudon notes that Knight “makes an annual continental tour” and comments “we wish all nurserymen and gardeners who travel on the continent to give us a similar account of it… there is a great want of spirit among the young nurseryman about London. They think they have done a great deal if they have ventured as far as Paris; but we are sure, but if they were to travel through Germany, and even into Italy, they would greatly enlarge their minds, acquire much more professional information than they have any idea of; and, what they will, perhaps, like best of all, extend their commercial connections.” The full account can read at: 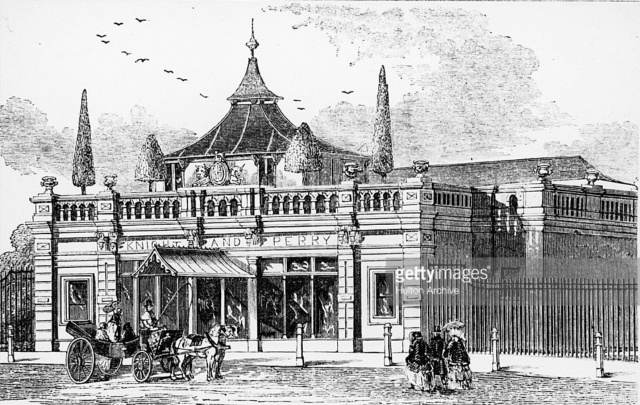 Knight had married in 1820 but he and his wife had no children, and he later entered into partnership with his niece’s husband, Thomas Perry. The nursery then became known as Knight & Perry.  Their catalogue  showed the King’s Road premises with a striped awning over the entrance. It listed a wide range of stock including, many plants that Knight had personally acquired abroad. 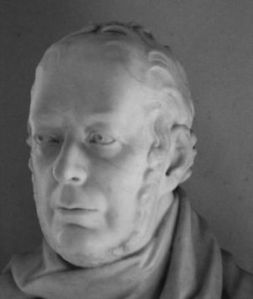 Joseph Knight was a devout Catholic, and shortly after the Catholic Emancipation Act of 1829  he gave money to his former parish at Brindle in Lancashire to build a new school. This building is still in use as the Parish Centre. 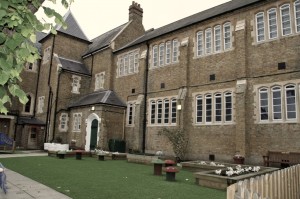 Around 1840 the Knights spent £5,000 buying a two and a half acre plot on Cadogan Street  in Chelsea. Here they built a complete Catholic community based on medieval models, including schools, a convent, a cemetery, almshouses and a chapel, all from designs by  Pugin. Later there was also a burial ground and almshouses for 18 residents. Part of the site was later redeveloped for the Church of St Mary, Cadogan Street. 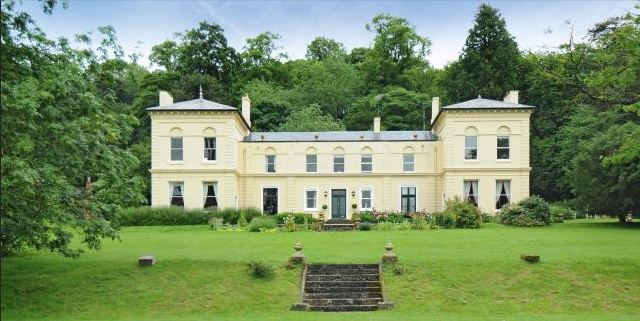 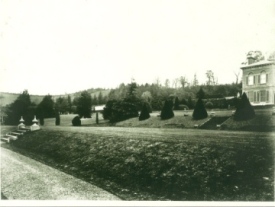 Some time after his wife’s death in 1845, Knight decided to retire to the country and built an Italianate mansion, Bitham Hall, at Avon Dassett near Stratford upon Avon where he retired in 1852  with his niece and Thomas Perry. 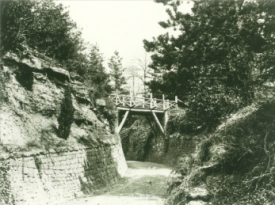 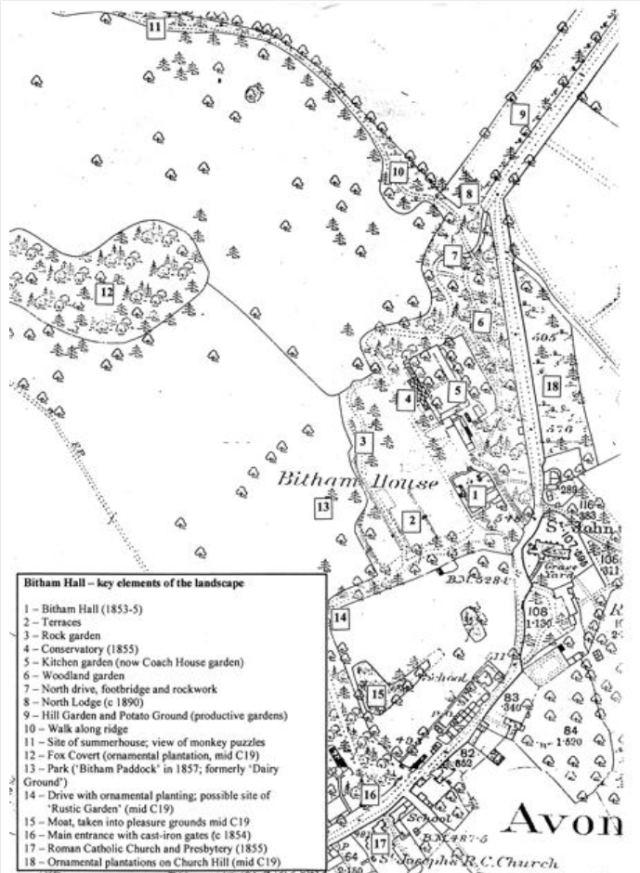 Although the property has now been divided  the  essential structure of the grounds remains intact, as can be seen from the plan below [compiled by Sandra Rice and to be found on the village website]. 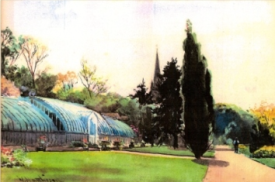 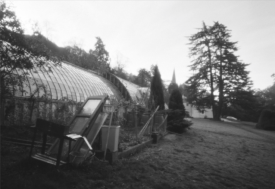 There are several important trees probably surviving from Knight’s original planting, and an impressive greenhouse [or conservatory] range.   Knight also built the nearby St Joseph’s Catholic church for the village which was consecrated on 3 July 1855, only seventeen days before his death on 20 July.

A few months later Thomas Perry sold the nursery  to another nurseryman who would make it even more famous: James Veitch. Changing its name to  the  “Royal Exotic Nursery”, it became the London base for Veitch’s extensive range of exotic plants, grown in Devon and imported from all over the world, continuing on the same site until about 1914, and virtually eclipsing Knights name and reputation in the process. I hope this post goes a little way to bringing back to public attention.