Artificial Stone 1: the projector, the architect, the thief and the formula 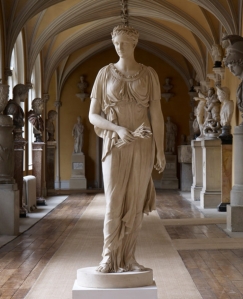 Artificial stone has apparently been around a long time. It wasn’t invented recently  by  jerry builders trying to copy the real thing on the cheap, or even by a prestigious company like Haddonstone, but probably by the Romans. However  not being a scientist or an engineer I hadn’t realised that something so seemingly simple a concept as artificial stone could be so complicated!

Most people connected with gardens and garden history will have heard of Coade Stone, the 18thc marvel that has proved more durable than real stone but there’s a whole lot more. So this is the first of a few posts as an attempt to tell the story of artificial stone and its use in gardens …

Artificial – or as it is sometimes referred – cast stone – was probably invented by the Romans in the 2nd century, although there are those who claim that there are earlier examples to be found in Egypt and Israel dating from Biblical times. [see Stanley & Bond, Concrete through the Ages, 1999].  Their ‘formula’ for want of a better word consisted largely of volcanic ash mixed with lime to create a strong cement-like mixture known as pozzolana after the city of Pozzuoli where it was first discovered around 2-300 years BC.  It was used largely for  foundations or the hidden parts of buildings in place of natural stone – including the foundations and the dome of the Pantheon in Rome –  and because it also had the remarkable ability to set under water for work in ports and harbours which is where much of it still survives. 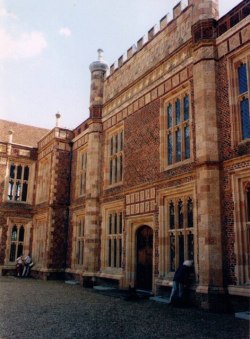 Entrance facade at Sutton Place
©Michael Ford, 1995 and licensed for reuse under this Creative Commons Licence.

After that there is very little evidence of artificial stone being used anywhere, or even being made until the late 17thc.   The only notable exception is apparently parts of the walls of  Carcassonne in France built in the 12thc.  Some modern sources follow the example of 19thc writers like John Claudius Loudon and  claim that a lot of the exterior – decorative panels, doorways, cornices etc – at Sutton Place near Guildford was artificial or cast stone.  In fact it’s probably the earliest moulded terracotta seen in Britain, consisting of at least 18 different colour blends of clay, although  it has proved equally as hard-wearing as artificial stone.

The first written references to making artificial stone that I can find are a series of comments by  John Evelyn in Elysium Britannicum, dating from the end of the 17thc.

Advising on how to build a mountain in your garden [don’t ask – I’ll write a post about it soon!] Evelyn says that if you don’t have natural rock available then “the defect thereoff may be well supplied by Rocks made artificially.”

This  “may well be conterfited with  stucco & plaster in moulds, others cutt in stone, mixing them with shells and forming nices, festoons frezes etc: Also may glazed bricks be used & the refuse of glasse workes  & furnaces”. It can be “fastened with cement, with addition of shells broken up & mingled with the grosser powder of lead.”

Evelyn’s work wasn’t published until 2001 and so its difficult to know how many people in his day actually knew anything about his ideas, or were actually making ‘stone’ in this way. As a result it’s not until 1722 that  the real story of artificial stone in Britain begins. It was then that Richard Holt claimed to have ‘retriev’d’ an ‘excellent and most useful art, well-known to the ancients, but lost to the world for many ages’.   He was granted 2 patents that year implying that it was thought to be a potentially commercial proposition. However, Holt was a  ‘projector’ who had several other  not very successful ‘inventions’ under his belt but who claimed he was not like “the generality of rash Enterprizers, whose wild schemes are never reduc’d to solid Practice.”  Of course that’s exactly what he probably was! 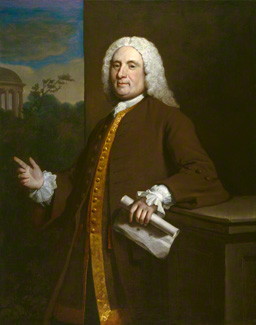 One of these patents was taken out in association with  the architect Thomas Ripley who in 1726 was to become the Master of the Kings Works, and thus an extremely  useful business partner. The patent was for a “compound liquid metal, by which artificial stone and marble is made, by casting the same into moulds.”  The second patent, this time in the names of Holt and Samuel London, was for a composition (without clay) for making whiteware, “formed and moulded in a new method”.   Neither has any formula attached but  Holt published a pamphlet in 173o:  A short treatise of artificial stone, as ’tis now made, and converted into all manner of curious embellishments and proper ornaments of architecture.

This was  dedicated in the usual flowery way to Lord Burlington who it appears may have offered his patronage to Holt. 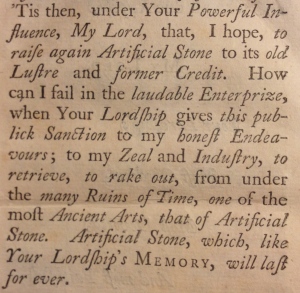 In it Holt says his ‘secret composition consists of such ingredriants, as are, by strong heat of fire, reduc’d to the state of fluidity…and vitrification and (when cold) consolidate into the hardest stone.’

He began manufacturing  in  Lambeth,  claiming that the material he had developed was frost proof and that he could undercut the prices of the lead figure makers. Examples could be inspected either at York Building Stairs [roughly where Embankment Gardens are today] or near Cuper’s Bridge on the south bank of the Thames [roughly where the National Theatre now stands], and were for sale “at a very cheap Rate for ready Money”.

Holt had a very clear market in mind, and he outlined the advantages of his ‘new’ material particularly in comparison to Portland stone, and then suggested an experiment to prove its strength.

Another document, written by Holt and signed by several of his friends who were sworn to secrecy, gives full details of his formula. It indicates that the composition was quite different from the material later developed by the Coade Factory since it included lead ore. (For more information see  N.Valpy ‘Advertisements for Artificial Stone in the Daily Advertiser’, English Ceramic Circle Transactions, vol 12, no 3 (1986))

Although Holt’s pieces were later described  by Daniel Pincot [of whom more later] as having “neither taste in the designs, nor neatness in their execution” he apparently managed to supply material to Chiswick House and Orleans House in Twickenham. (Eileen Harris, British Architectural Books and Writers, 1990) However, despite this, he doesn’t seem to have prospered.

This may have been because of his claims that ‘villainous’ methods were being used to  try and steal his secret. and his warnings to potential buyers of a ‘pretending architect’ who claimed he ‘knowd how to elude and set aside any patent whatsoever.’ 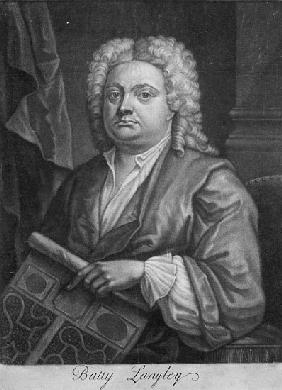 The ‘pretending architect’ was none other than the wonderfully named Batty Langley who is better known as a prolific author of architectural and garden design books. Eileen Harris suggests that Langley “was not intellectually inclined, nor given to original concepts either in gardening or architecture…[but] he was extremely alert to new ideas and fashions.” [Harris, p.263]

So it is quite likely that Holt was right.

If Langley didn’t steal Holt’s ‘recipe’ he came up with a very similar one at the very same time. Not everyone was taken in: George Vertue in his Notebooks (Vertue III, 51). for example described Langley  disparagingly as ‘a bold face undertaker’. 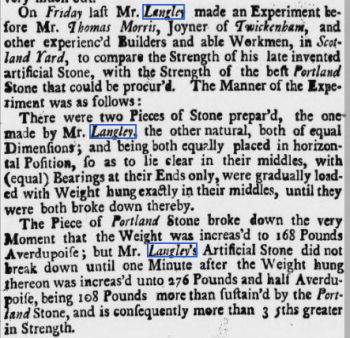 But more proof of Langley’s probable ‘guilt’ was given in November 1729 when he staged a demonstration in London to show the superiority and  strength of his ‘immitation of free stone’  when compared with natural Portland stone.    It was exactly  the same as the one described by Holt.  It’s true  of course that Holt’s book hadn’t been published at this point but if Langley had acquired the formula he’d certainly have had the opportunity to learn about the various trials and tests on the material that Holt would have done before publicising them himself  in print.

So it was Langley not Holt who gave the  impressive public display and the success of ‘his’ cast stone led him to go into manufacturing ‘Sculptured or Carved Ornaments’.

These included statues, busts, ‘all manner of curious Vases, Urns, Pine Apples, Pedestals for Sundials, Balustrades, Key-Stones to the Arches of Windows and Doors, Bases and Capital for Piers of Gates, Columns and Pilasters’ and were available from his warehouse at ‘the Hercules Head, near the Faulcon-Stairs on the Bank-side in Southwark’ (Daily Advertiser, 25 May-6 July 1731).

Richard Holt did not give up lightly.  As soon as Langley’s adverts began to appear in the Daily Advertiser he countered them with adverts of his own, challenging Langley to declare “how and by what means [he] has come at any Insight into the Art of making Artificial Stone; and how very defective and short of Holt’s true Secret, his Discoveries (by tampering with Workmen) must needs be’ (Daily Advertiser, 28 May-1 June 1731).

Sadly there doesn’t appear to be a known outcome to the dispute but then Holt died and  ‘the projector dying, the whole affair died also’. Meanwhile Langley continued to flourish.

Despite Daniel Pincot’s later assertion that ‘time has proved the materials durable in the severest trials’ none of Holt’s or Langley’s artificial stone products have been survived – or at least none that have been identified. This makes it  impossible to know the composition of their stone substitute and who – if either – was telling the truth!

With both Holt and Langley off the scene the artificial stone business seems to have largely faded away for a decade or two until the appearance of Daniel Pincot.

By 1765 we know that Daniel Pincot had  established a workshop in Whitechapel in the east end of London because John Bacon, the sculptor and later Royal Academician, is known to have worked there as a modeller in his early years. In 1767 Pincot advertised that he had “set up as a Manufacturer of artificial stone” [Public Advertiser, 10 Feb 1767], and was selling ‘all sorts of rich carved Ornaments used in Buildings, viz. Tablets, Frizes, Medalions, Ionic and Corinthian Capitals, Statues, Bustos, Vases, etc in several Compositions; some resembling Portland Stone, but much harder and more durable, others still more beautiful, approaching nearer to Marble; the Whole executed in a Manner far exceeding any Thing of the like Kind that has hitherto been offered to the Publick’ (Daily Advertiser, 31 Jan 1767).

However, the business may not have prospered, because  in the next  few months, and certainly by October,  the Whitechapel premises had been taken over  George Davy who continued to manufacture cast stone items. That July ‘the Proprietor of the Artificial Stone Manufactory in Goulston-Square, has now opened a Warehouse at No. 18, the Corner of Glastonbury Court, in Long Acre’ (Daily Ad, 7 July 1767 ), but this could have been either Pincot or Davy. 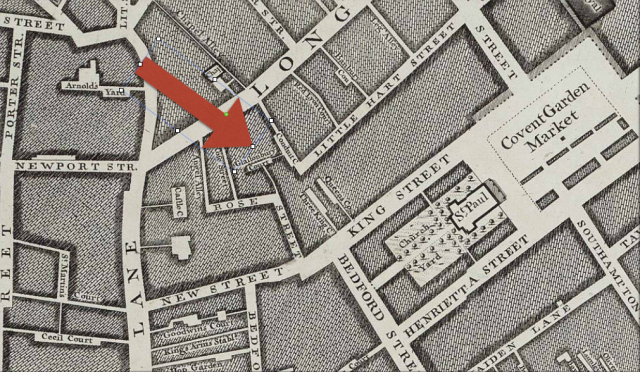 Later in December 1767 an auction sale of a hundred or so pieces  from the Whitechapel factory was held by Christies.  Was this Davy having a clear-out of his predcessors stock, or Pincot desperately trying to raise some cash?  By this time Pincot is known to exhibited an ‘antique basso-relievo, in artificial stone, unburned’ at an exhibition held by the Free Society of Artists, but had also reestablished a business at Narrow Wall, near the Thames in Lambeth. He also sought – and found – a business partner …

This turned out to be Eleanor Coade. Within a few years she was running the factory and Pincot was just another footnote in history. More in another post soon.