A stylised Peruvian booby bird – one source of guano – from a window at Tyntesfield.
http://animalhistorymuseum.org

My posts on nightsoil and guano [from July 2015,] got picked up by an article in the Guardian online – fame indeed! So here’s a postscript about the house paid for by the vast fortune made by William Gibbs, the owner of the monopoly on exporting these valuable bird droppings from Peru. As the ditty of the time had it:

William Gibbs made his dibs

From the turds of foreign birds 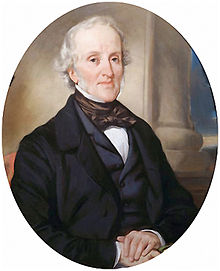 Guano netted him an immense fortune and he was probably  the richest commoner in England. Like many self-made men he invested in landed property to establish himself in society, and in his case it was  an estate – Tyntes Place – just outside Bristol in 1843. Renamed Tyntesfield it was never his principal residence – the family lived mainly at Hyde Park Gate in London – but it served as his base when he came to Bristol on business, and for holidays.

Gibbs might have been super-rich but the  vast mansion  was expensive to maintain and within a hundred years was falling into disrepair, before eventually being bought by the National Trust at auction in 2002.  Read on to discover more….

Within a few years of making his purchase, Gibbs began a major program of rebuilding and enlarging. He and his wife Blanche were Anglo-Catholics and supporters of the Oxford Movement and their choice of a  Gothic style was probably influenced by their religious views and   by Augustus Pugin’s recently published book  Contrasts which called for “a return to the faith and social structure of the Middle Ages” with  architecture to match.

By the 1850s Gibbs commissioned John Crace to redecorate the interiors and then in 1863 the original house was swallowed by an even grander Gothic scheme devised by architect John Norton. He added another floor, two wings and  towers. The new mansion had 23 principal bedrooms and cost £70,000 – equivalent to 18 months profits of the guano trade. 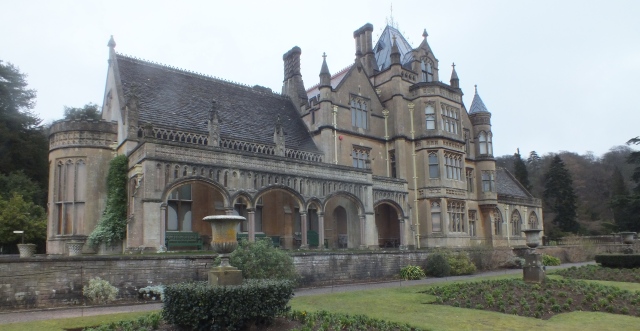 A massive chapel designed by  Reginald Blomfield was added in the 1870s although never consecrated. Gibbs also bought adjoining properties  and their land so that the Tyntesfield estates grew to over 6,000 acres and employed over 500 people.

The Gibbs were great philanthropists,  paying for the building of gothic churches and chapels all round Britain, including Keble College, Oxford, as well as contributing generously to many other causes, and opening their grounds regularly for charitable events. He was made High Sheriff of Somerset but never sought any elected office.

When William died in 1875,  Tyntesfield and the bulk of the estate  was inherited by his eldest son Anthony who died in 1907. It then passed to Anthony’s eldest son, George  who became a Tory MP and was created the 1st Lord Wraxall. It was not his principal residence either and by the time of his death in 1931  was already beginning to show signs of decay.

The war speeded up this process. The Ministry of Agriculture took over the running of the estate, Clifton High School moved into the mansion and  the US Army Medical Corps built a large temporary hospital in the ground. 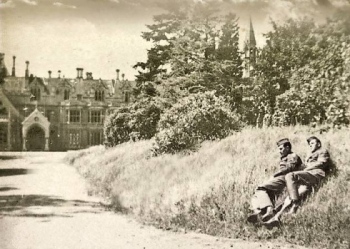 After the war  the redundant hospital buildings were converted into temporary accommodation  for  homeless civilians and soldiers returning from fighting. This survived as ‘Tyntesfield Village’ until 1960 when it was abandoned and the land returned to its former use.  For more about this see http://www.northsomersettimes.co.uk/news/tyntesfield_s_wartime_tales_1_1746051

Minor bomb damage to the house roof was not repaired and over the course of the next 60 years was allowed to get worse and worse. The reclusive 2nd Lord Wraxall continued to live at the house until his death in 2001 but gradually retreated to just 3 rooms. Under the terms of his will the property had to be sold on the open market for the benefit of his 19 heirs – and against considerable competition and amidst considerable controversy the National Trust bought the house and 150 acres of the surrounding land. The rest was broken up and went into mainly private hands.

It marked the beginning of a changed attitude by the Trust to newly acquired properties. Unlike Chastleton their previous major acquisition which was shut for 7 years pending repairs, the trust opened Tyntesfield almost immediately, despite concerns about health and safety, and not only allowed the public in to see what was happening but began to involve them  in fund raising and decision making. Starting out with a staff of 30 volunteers, by 2013 the total of employed and volunteer staff exceeded 600, more than the number engaged by any other National Trust property.

Some of the outbuildings at Home Farm,

Although the house and its surrounds have been separated from the estate much of the feel of the parkland has been retained.  From the new entry point – through the Home Farm – whose outbuildings now house the obligatory cafe, restaurant, bookshop, giftshop etc,  a yew lined drive  leads to up to the house with its balustraded terraces.

Visitors can take new walking paths that lead past the rose garden, summer houses and aviary before arriving at  a formal gravelled terrace walk that leads to the end of the house.

The Rose garden and summerhouses
http://www.skyscrapercity.com

The grade 2 listed aviary is adjacent to the footings of the old conservatory. It was built in 1880 to house exotic birds, but was converted into a playhouse for Doreen, the first Lord Wraxall’s daughter.

There are impressive formal terraces at the front of the house, with 10 ornamental flower beds planted in an exuberant style and commanding extensive views over the surrounding parkland and arboretum. They have formal displays of spring bulbs and, in true Victorian style, over 10,000 tender bedding plants during the summer.

© Copyright Philip Halling 2011, and licensed for reuse under this Creative Commons Licence.

More impressive still is the kitchen garden and associated buildings which are much further away from the house. 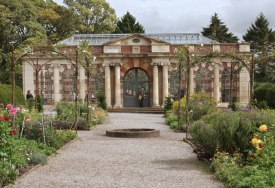 The Orangery wasn’t built until 1897, and unlike the rest of the estate is in a classical rather than gothic style. It suffered badly from neglect and ended up on the At Risk register maintained by English Heritage. It was finally restored at a cost of about half a million pounds, as the result of an imaginative partnership between the National Trust, a firm of specialist masons and the City of Bath College which allowed 12 students to work alongside experienced masons as part of their training.  This, with the other restoration projects run on  the estate won the Trust a Daily Telegraph/ English Heritage Angel Award.

Adjacent to this is beautiful courtyard, now planted in ‘tropical’ style 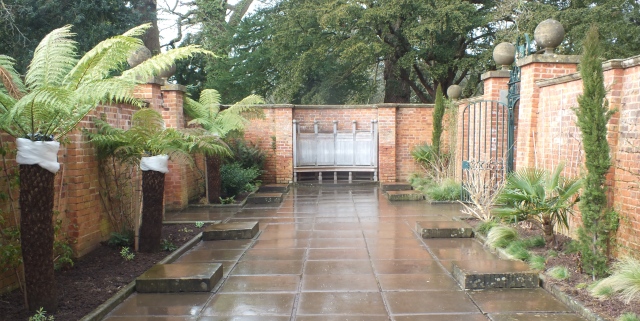 and then a series of greenhouses and outhouses of various kinds… 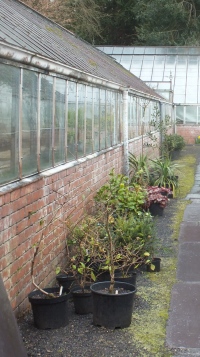 The Gibbs family created their own arboretum and named it ‘Paradise’.  There is an extensive selection of 19th c trees and shrubs, which illustrate the collecting habits of 4 generations of the family and which now include  eight Champion trees.  Unfortunately  I’ve not been able to find out much more about the collection, because like most National Trust guidebooks, the one for Tyntesfield is much more concerned with the architecture, contents and family history rather than any detailed account of its gardens and parkland.  The same is true of James Miller’s Fertile Fortune: The Story of Tyntesfield, first published in 2003.

However there are two interesting interviews with two of Tyntesfield’s head gardeners which give a good insight. One is with  a former incumbent from 2008 in  Horticulture Week at

But of course nothing beats a visit [even on a miserable rainy day!] and the Trust do organize regular tree and parkland walks. Information about them can be found via: