Tredegar…Restoration grandeur and a dancing kangaroo

No sooner had I finished writing this post [many many months ago now] but Tredegar House was the subject of a TV programme with Griff Rhys Jones.  So, as I didn’t want to be thought a copycat, I decided to delay publishing …and inevitably it slipped off the radar. Which is a great pity because Tredegar deserves star billing!  It is probably the finest later 17thc building in Wales and, in the opinion of the late Giles Worsley, one of half dozen most important Restoration houses in Britain.

If you saw the broadcast then I hope this will be a slower and more in-depth account …but if you didn’t, then read on and maybe this will inspire you to find out more about Tredegar and the Morgan family or even go and visit!

For more than 500 years, between 1402 and 1951, Tredegar was home to one of the greatest Welsh families, the Morgans, later Lords Tredegar. In their late 18thc heyday they owned more than 40,000 acres in Monmouthshire, Breconshire and Glamorgan.  Unsurprisingly the house is Grade 1 listed.  However, its once large estate is now sadly depleted, either built on or carved up by the M4 and other major roads, nevertheless what remains is still of sufficient importance to be listed Grade 2* by Cadw on their Register of Parks and Gardens in Wales.

I was lucky enough to visit Tredegar with Richard Wheeler of the National Trust, Robert Peel of the Gardens Trust, and Liz Whittle, former inspector of Historic Parks and Gardens for Cadw, and I am grateful to them for permission to use their notes as the basis for some of this post.  If there are any errors they are mine and not theirs.

The remaining Tudor wing of Tredegar House from the Cedar Garden
from https://tredegarhouse.wordpress.com

A grey stone house dating from 1490, was constructed for Sir John Morgan, a supporter of the first Tudor king, Henry VII.  John Leland described it as “A very fair place in stone”, and one wing was later incorporated into the much larger red brick house constructed between 1664 and 1672 for William Morgan. 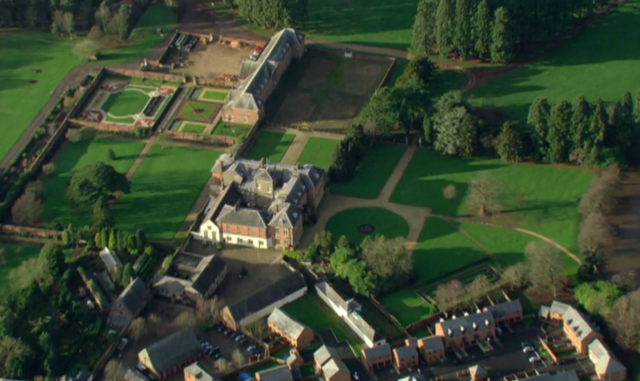 As can be seen from the aerial photo the main front of the house is approached through a double forecourt, [seen in shadow top centre]  typical of grand early modern houses. There is a magnificent gated entrance made by the Edney brothers between 1714 and 1718 which leads first into a  cobbled court, with the distinguished Riding School and Stables block on the right, and then into a second simple grass-lawned court in front of the main door of the house. 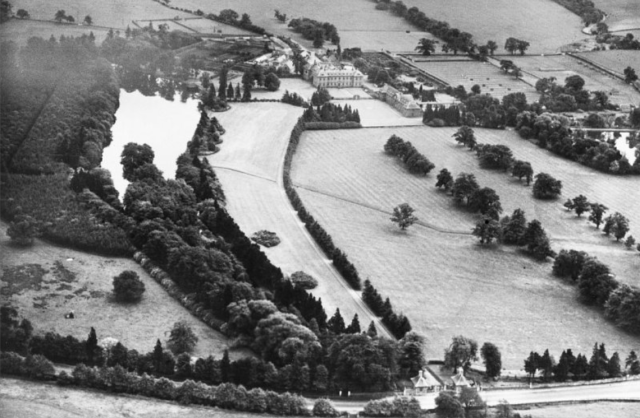 The park was  created at about the same time as the house, with several great axial avenues.  The layout of these is shown on the earliest surviving survey, by Robert Snell, dating from the 1770s. [Unfortunately I cannot find an image of this map.] On the northern side one planted with oak  ran north west from the house and stables, while a double avenue of walnuts ran north east from the house up to the Iron Age Tredegar hill fort.   Further avenues branched off the main ones or lined routes through the park.   Only remnants of these survive as most were cleared away at the end of the 18thc.

In about 1790 Adam Mickle from Yorkshire was commissioned to landscape the park. His recommendations were ambitious but  were not all carried out. However he laid out the drive in its present position, and rerouted the turnpike road along the  line of what is now the A48. These alterations allowed the digging out of the long and sinuous Great Pool  to the north-east of the house. 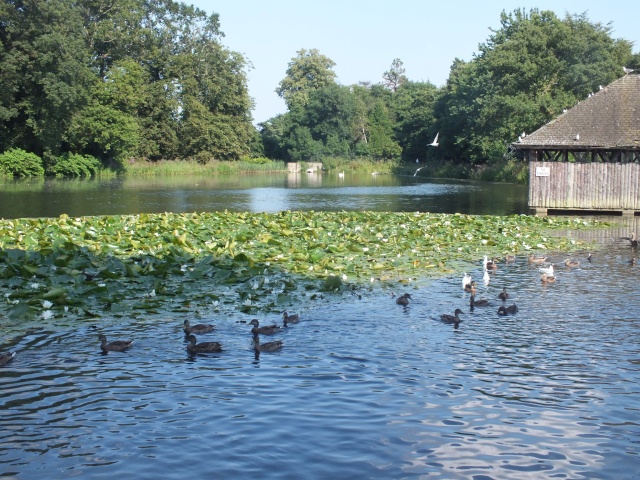 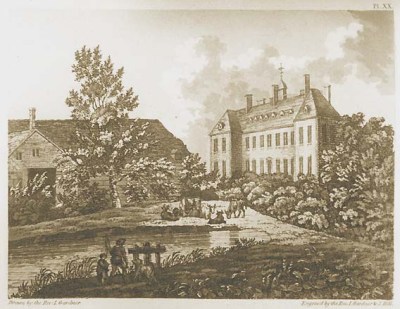 from “The History of Monmouthshire”
by David Williams, 1793

Engravings suggest that Mickle probably intended to have the house reflected in the water when viewed from the distant Tredegar Fort and for the Fort to be reflected  in the water when seen from the first floor of the house. The new lake was fed by a channel diverted from the River Ebbw.  This was extended in 1806 to become one of the feeder for the docks in Newport.

In the 1860s the main entrance was shifted from the original double courtyard, and the driveway was extended to lead through a new iron fence to a circular gravel sweep in front of the grand new entrance on the north-east side.  A pair of lodges were built in sympathetic style and material in the 1880s. 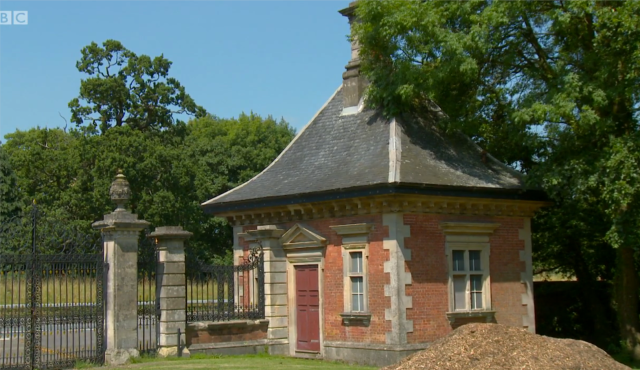 In Mickle’s day there were few trees around the lake,  but this all changed between 1880 and 1900 when large numbers of Wellingtonias (Sequioadendron giganteum) were planted beside the lake and Corsican pine (Pinus nigra var. maritime) along the Newport dock feeder canal through the park. Elsewhere  deodars (Cedrus deodara) were planted along the drive and  two more prominent stands of Wellingtonias to flank the approach to the house from the oak avenue. For more on Wellingtonias and their history in the UK see my post from June 2014:        http://wp.me/p4brf0-6TU

To the south-west of the house, and overlooked by some of its upper floor rooms, are a series of walled gardens. The walls date mostly from the late-17thc or early-18thc although the planting and designs have been altered since then. They are linked by an axial path via gateways with massive brick piers that are topped with stone urns.

It is thought that this arrangement is based on the layout of the previous Tudor mansion.

Probably the most well-known feature of Tredegar’s garden is the restoration work carried out in the area in front of the early 18thc Orangery.   Archaeology in 1991 revealed a garden layout contemporary with the building, but of surprising  complexity and completeness. Excavations clearly identified the paths and flower beds, and fruit growing areas , and found of the shape and materials of the geometric ‘parterres’.

The subsequent restoration uses coal dust, brick dust, white mortar, crushed shells and sand to make patterns of highly contrasting colours.  The evidence was then extrapolated to lay out  the space on the other side of the axial pathway  in complementary fashion, although without the archaeological evidence to substantiate its authenticity. 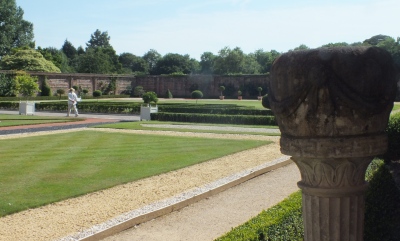 Work in one corner of this garden also yielded evidence for a viewing mound, now long gone, from which to admire the parterre. For more on viewing mounts see  my 2 earlier posts at: http://wp.me/p4brf0-hQv

The adjacent garden  named after the Cedar of Lebanon growing on its lawn, is directly overlooked by the grandest of the ground and first floor rooms. It was probably laid out originally in the late 17th century in a formal geometrical manner, but it is thought that Mr Walker, Head Gardener from 1782 – 1801, made changes influenced by new plant introductions mainly from North America. This later layout is essentially what survives today and is now framed with huge herbaceous borders.

The Cedar Garden is also the site of the grave of Sir Briggs, the horse ridden by Godfrey Morgan [later 1st Viscount Tredegar] in the Charge of the Light Brigade during the 1854 battle of Balaclava in the Crimean War.  More can be found about Sir Briggs at : 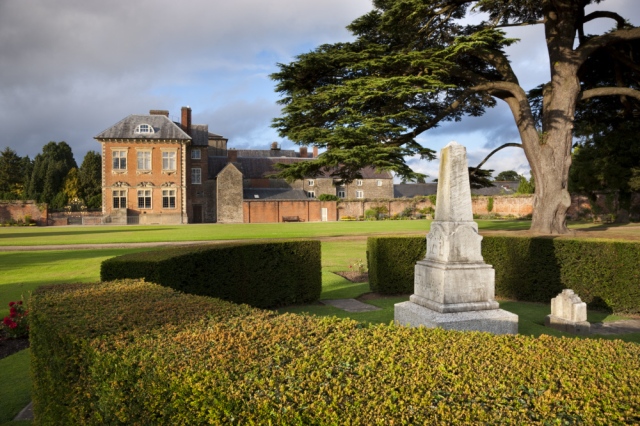 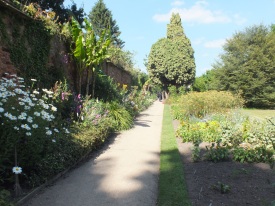 Beyond these gardens is the Orchard Garden with a few surviving old apple trees, some 19thc  glass houses  and the head gardeners’ house, an impressive 17thc brick clad structure.  Plans survive from as early as 1827 when it was clearly a thriving productive garden, and apparently as you wander through you may even catch glimpses of the old pipes from long-gone hothouses, which would have housed the tropical fruits grown for the family.  The exotic element took on a rather different aspect in the 1930s when part of the area was used to house some of the 2nd Viscount Tredegar’s menagerie.

For more than twenty years the garden has been managed alongside Growing Space – a registered mental health charity, based in Newport. They provide real work skills and a support network to help adults with mental ill health reach goals and improve their quality of life.  For more about them see:

When Godfrey Morgan died in 1913, unmarried, the estate began a rapid decline. It passed first to his nephew, Courtney Morgan, who unfortunately was a spendthrift, and then to  Courtney’s son and heir, Evan.

Lord Tredegar with Blue Boy on his shoulder.
http://www.walesonline.co.uk/news/wales-news/lord-tredegar-evan-morgans-life-2518914

Evan was to put it mildly an eccentric who led an exotically camp lifestyle. He was in military intelligence, became a papal chamberlain but at the same time was also an occultist, and friend of Aleister Crowley. His wild society parties attracted everyone from HG Wells and Aldous Huxley to high-profile Nazis – all of whom he’d entertain by dancing with Somerset his pet kangaroo.

His  menagerie of animals also included Alice the bear and Blue Boy the parrot which he trained  to climb the inside of his trouser-leg and pop its head out of his flies.  Married twice, to an actress and then to a Russian princess, he was actually  in the words of the Daily Mail  “a promiscuous homosexual”. [Daily Mail 18 June 2013] 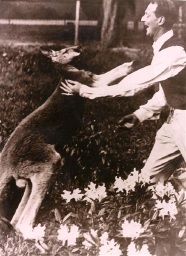 Evan Morgan’s almost unbelievable story is told in Not Behind Lace Curtains: The Hidden World of Evan, Viscount Tredegar, by William Cross and FSA Scot [2013].  However, perpetual extravagance combined with heavy death duties eventually reduced him  to living in a small corner of the house before he died childless in 1949.

His eventual heir, John Morgan,  had no interest in the estate, and no children, so it was parcelled off and sold in 1951, the house  stripped and the contents auctioned.  The titles died out when he did in 1962. 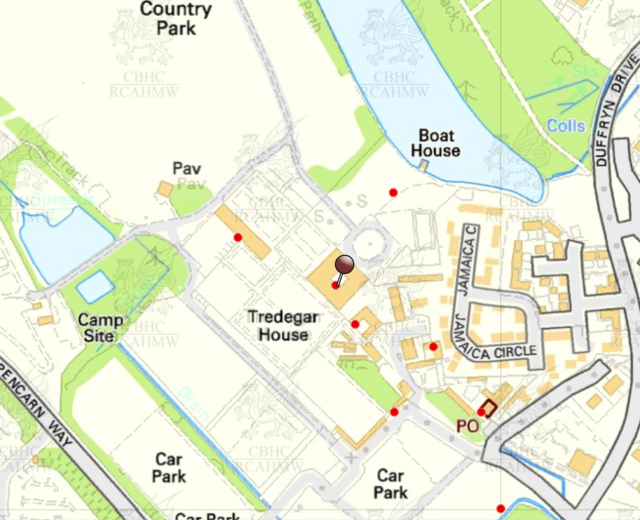 Road and housing development then took place on some of the land, and as can be seen from the map some of it very close to the house. This has altered the house’s relationship to the rest of the estate, but it has paradoxically opened up other opportunities for the future, including greater involvement of the local community with both.

Tredegar House and its immediate grounds and gardens were  bought by  the Sisters of St Joseph to use as a school and they continued there until they outgrew the building  and in 1974 moved out.  The house was then taken over, by Newport Borough Council  giving rise to its then status as “the grandest council house in Britain”. 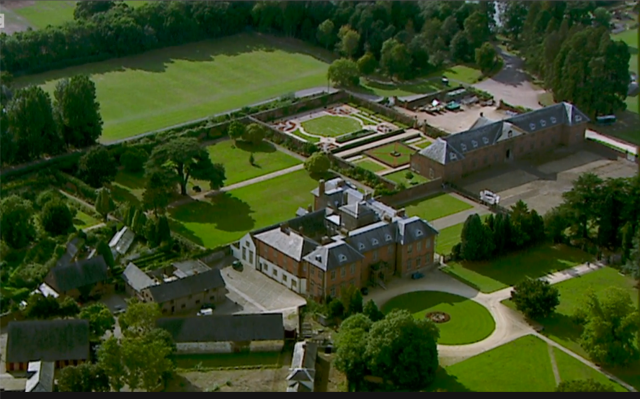 The grounds became a country park and the Borough Council carried out restoration and repair works to the house but in 2011 as austerity began to bite  they signed an agreement with the National Trust who took on the  management of the building, as well as the 90 acres of gardens and parkland, on a 50-year lease from 2012.  This gave rise to concerns amongst some local people that it would revert to being museum-like and detached.  But, just as at Dyffryn [see post 13th December 2014,  http://wp.me/s4brf0-dyffryn ] the Trust has departed from its traditional approach to running a great estate, and the result has been life-enhancing for the house. It looks set to be the centre of its local community once again.

For more information see the website of the thriving Friends of Tredegar House:

and a lively and informative unofficial blog as well:

There is also more ‘official’ information at  both the National Trust website, and that of  the Royal Commission on Historic Monuments for Wales

and finally if you want to see Griff Rhys Jones programme about the house then it’s on Youtube at:

but better still go and visit!

Email - education@thegardenstrust.org Website - www.thegardenstrust.org
View all posts by The Gardens Trust →
This entry was posted in Uncategorized and tagged baroque, Cedar of Lebanon, National Trust, orangery, parterre. Bookmark the permalink.