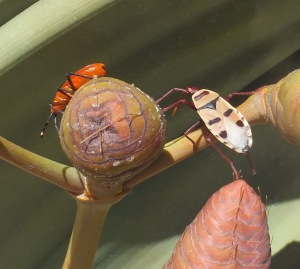 What a mouthful that is! Even worse when you realise it’s the Latin name of a bizarre plant ‘discovered’ by a man born in the Austrian Empire of Slovak origin, who worked for the Portuguese monarchy in one of their African colonies and ended up being buried in London.

Actually bizarre is a bit of an understatement: how many plants do you know that only have two leaves, live on fog and sometimes have to be kept in a cage!

OK I admit that’s a bit of a cheat because, like the Wollemi pine, it’s to protect the plant from humans rather than the other way around!

But why am I writing about Welwitschia on a blog about Britain’s parks and gardens? Read on to find out… 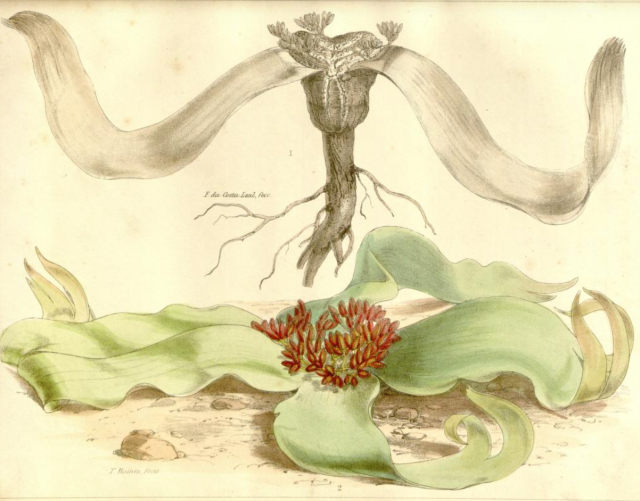 Welwitschia from a painting by Thomas Baines, in Transactions of the Linnean Society, 1863

Having seen it grow in Namibia I discovered it was being grown at Kew and went to see it in the Princess of Wales Conservatory, and ended up by being lucky enough to go to the conservation greenhouses which are usually off-limits to the public.  After seeing the skilful care they receive there I thought very few other places would have the ability of grow them in Britain. However, I was astonished to discover that according to the experts who are growing it at Kirstenbosch Botanical Garden in Cape Town,  they now think it possible for Welwitschia to be grown almost anywhere and by almost anyone with a heated greenhouse or even warm window sill and a reasonable degree of horticultural skill …so I’m looking forward to seeing Welwitschia become the cool must-have plant in some of Britain’s parks and gardens soon… even if they don’t have a resident chameleon! 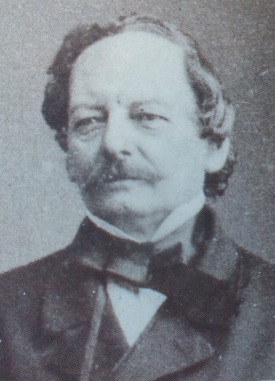 Welwitschia was ‘discovered’ by [surprise surprise!]  Dr Friedrich Welwitsch, a farmer’s son, born in 1806 in Carinthia. Friedrich studied medicine at Vienna University but by 1839 he had been appointed director of the botanic gardens in Lisbon, and from there was sent to explore in Portugal’s African colonies.

In 1859 he was in the Namib Desert, a vast arid stretch of south west Africa, nowadays mainly in Namibia but which also stretches into southern Angola, then a Portuguese colony. There he met David Livingstone and also Thomas Baines, an English explorer and artist.  Both Baines and Welwitsch were apparently pioneers of ‘travel photography’ although I have not been able to trace any of their photographs. 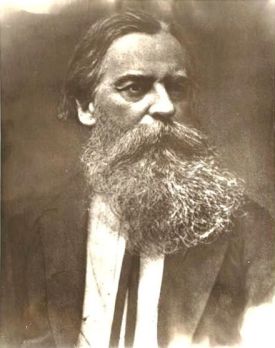 Thomas Baines in the 1860s
National Library of Australia

One of the many plants Welwitsch was able to record was a relic from the Jurassic period. It’s thought its ancestor was cut off as its environment slowly but progressively became more arid. All its close botanical relatives became extinct but it is  very distantly related to conifers, cycads and ginkgos,  and  together they make up the Gnetophyta. [ All a bit too complicated to explain here but if you want to know more then take a look at:

Its difficult to know who ‘discovered’ it first – and in fact since there were other Europeans already trying to settle the coastal strip – its pretty certain it had already been ‘found’.

Baines found it in the dry bed of the Swakop River in what is now Namibia in 1861. In his account of his journey across Africa  Explorations in South-West Africa Baines tells us  he drew it and collected the insects he found on it, but not being a botanist, he makes no attempt to name or classify it. Nor does he seem particularly amazed by it. The exact opposite is true of Welwitsch. The story goes that he was so overcome by his find that he “knelt on the sand and did not move ahead” and simply stared at it  “half in fear lest a touch should prove it a figment of the imagination.” 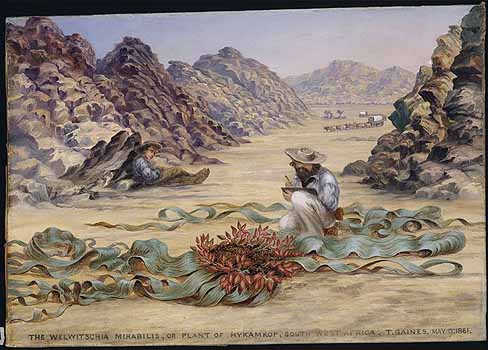 Welwitsch sent the first material of Welwitschia to Sir Joseph Dalton Hooker, Director of Kew, in 1862. Hooker described it and named it in honour of Welwitsch, despite the fact that Welwitsch himself recommended that it be named Tumboa, its native Angolan name. Its species name mirabilis means marvellous or wonderful in Latin. The specific name was later changed to bainesii to honour both men involved in its discovery, although mirabilis is the name recognized today.

Welwitschia is unique in the plant kingdom in several ways. Firstly because despite appearances each plant has only two leaves, which are often shredded by the wind and so give the impression of being more numerous. The two leaves grow continuously but extremely slowly and have been known to reach over 6 metres in length. They are broad and leathery and remain very close to the surface of the ground, which helps prevent soil erosion around the stem, and keeps the soil underneath cooler and damper. Of course Both ‘cooler’ and ‘damper’ are rather subjective terms since the Namib is inhospitable terrain  to put it mildly and  the temperature is regularly  40c+  and can apparently reach considerably higher.

Again despite appearances that they are “dwarf” plants Welwitschia actually have an underground stem, rather like a huge woody carrot,  that can go down as far as 30m. They rarely reach a metre in height, so a comparatively small plant can actually be hundreds of years old. The oldest known specimens, like the one in the cage, are thought to be  lived a couple of thousand years and are still not much more than 1.5 m high.

Apart from the intense heat there is also very little rainfall. Annual levels being usually much less than an inch [25 mm] but unsurprisingly Welwitschia have adapted to survive by relying on an unlikely secondary source of water: sea mist.

The Namib Desert runs parallel to the African coast which is swept by the cold Benguela current. The clash in temperatures regularly creates  a thick coastal fog.  Every few days this fog gets blown extraordinary distances – up to 150km – before it finally evaporates and Welwitschia are found only in the strip of the desert reached by the mist.  The water is taken in through a network of very delicate surface-hugging lateral roots but, in another unique adaption, mainly through the leaf stomata [the tiny pores usually on the underside of the leaves that is otherwise used for taking in and expelling air/gases – google for more info!]. The stomata on Welwitschia are on both sides of the leaf and open under foggy conditions and close when it is hotter: the reverse of normal plant behaviour.

Welwitschia are dioecious ie there are both male and female plants and the difference is very noticeable at ‘flowering’ time – except they’re not flowers but cones!

Pollination is now thought to be done by a specially adapted wasp, but in any case germination rates are miniscule and requires fairly heavy rain [by desert standards!] spread over a period of several days. As these conditions rarely occur, it often happens that many plants in some colonies are the same age, as they all germinated in the same good year.

Now you might think Dr Welwitsch’s discovery would have passed unnoticed outside geeky botanical circles, after all it is hardly traditionally beautiful and isn’t something that could be added to a garden border or even  to a greenhouse collection very easily.  But in fact it received wide attention not just from them but also from the general public. Lectures were given about it to clubs and societies all over the country and one commentator says it was  comparable only to the discovery of two other plants in the 19th century, the much more showy and exotic Giant Amazon waterlily Victoria amazonica, and the Rafflesia arnoldii, although that does seem a little excessive from the more restrained press coverage I’ve been able to find.  It was at a lecture in Norwich in 1863 that F.W.Oliver, professor of botany at University College London labelled it “the ugliest plant in creation”.

It might have been thought spectacularly ugly but  it was  also thought  impressive enough for the Linnean Society to devote a whole issue of its Transactions in 1863 to Sir Joseph Hooker’s account of the plant. This ran to some 50 pages  and included  illustrations by Walter Hood Fitch.

By then Kew had received assorted dried specimens, and 5 living ones, including one transported in a barrel and with its leaves trimmed to fit neatly inside!   You can read Hookers account in full at:

Unfortunately Friedrich Welwitsch  became ill with several unpleasant tropical diseases and had to return to Lisbon soon after making his discovery, and then in 1863 he moved to London  to work first at the British Museum and later Kew.  In 1869 he published an account of his various African discoveries in Latin  Sertum Angolense, in the Transactions of the Linnean Society, where he described 48 new plant species several of which had already been named in his honour including of course the plant that’s the subject of this post. 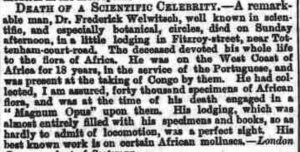 Welwitsch died in 1872 and was buried at Kensal Green cemetary, one of London’s new great burial grounds. He bequeathed his herbarium collection and plants to the British Museum, but the Portuguese were not happy and claimed because they had financed his work they should have his collection.  They took legal action but a compromise was reached and the collection divided…the Portuguese taking the best specimen of everything and BM the second. 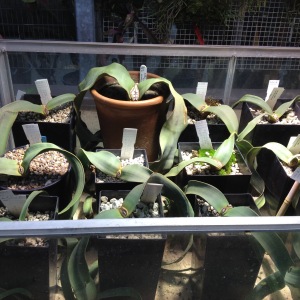 I’d guess the live specimens that reached Kew did not survive very long. I was told in Namibia that they hate any form of disturbance, and that even walking n the fragile surface around them can damage their root systems. So ripping one up and stuffing it in a barrel, however carefully, was probably not a good idea.  When Brent Elliot wrote his short article on Welwitsch in The Garden in June 1994, Kew had a specimen that was 35 years old, but that may also have died since when I visited the conservation nursery earlier this year I was only shown a collection of seed-grown small plants that were less than 10 years old.

So, given the extraordinary growing conditions it seems to require, and the fact that because of the size and sensitivity of its tap-root it can rarely be transplanted  it was a bit of a surprise to discover that the experts at Kirstenbosch Botanic Gardens now reckon that they could probably be grown  as houseplants! 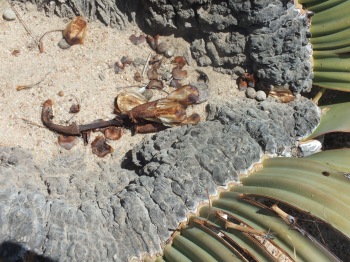 This is a real turnaround since they had initially built a special Welwitschia House in 1985, containing raised beds with bottom heat, filled with mineral-rich, well-drained, sand. This enabled them to raise plants to flowering size in a record-breaking 30 months.    But their experience and experimenting with growing conditions now lets them say: “Welwitschia can be grown easily, even as pot plants and even on window sills and verandahs in cooler climates.”

So if you want know how or to have a go for yourself then GOOD LUCK but I suggest you take a look this website before you try:

That link has plenty more information about Welwitschia, but if you want to know even more then good places to start might be :

Email - education@thegardenstrust.org Website - www.thegardenstrust.org
View all posts by The Gardens Trust →
This entry was posted in Uncategorized and tagged kew, Namibia, South Africa. Bookmark the permalink.