A Garden of surprises: Upton House

Upton is a surprise: let me correct that, Upton is a series of surprises. I happened to be passing reasonably close by and was looking for somewhere to break the journey. So I checked the  flash new National Trust website to see what the gardens  (and the tearoom) had to offer.   I discovered that Upton had been the country house of the Samuel family, and that in 1939 they moved themselves out and  moved their family bank and its staff from London in.   The house is currently transformed back to the 1940s so that you can see how the staff lived and worked for the duration of the war.   It’s a great idea and quite rightly has won awards.

A little more digging on the website and I discovered that Walter Samuel, 2nd Viscount Bearsted, whose father had founded Shell, and his wife Dorothea Micholls, were not only immensely wealthy, but great philanthropists and  perceptive  and discerning art collectors.  The house is effectively a mini National Gallery  with the  extraordinary range of internationally important pictures that they collected. Upton should be on every art lovers itinerary. But what has it to offer to a garden enthusiast?

Well, apart from one short piece about Kitty Lloyd-Jones [of whom more in next weeks post]  the National Trust website contained nothing obvious relating to the gardens, and certainly nothing to make  you want to  visit, so I wasn’t expecting anything other than a bog standard lawn and a few run of the mill borders, tacked-on  to prettify the setting of the art collection.  So read on to find out why I’m bothering to write, and write enthusiastically, about  what I originally supposed would be a nondescript sort of place…

Aerial view of Upton.  The Drive to the north on the left, the house and gardens in the centre and the parkland to the south on the right. Google Earth

We are lucky enough to have 3 articles about Upton  in Country Life. The first was published in September 1904 before the Bearsteds bought it, the next in 1936 after they  had completed much of their work, and finally the third in 1991 when, of course, the estate was in the hands of the National Trust.  The photographs are particularly valuable in allowing us to compare several areas of the gardens and grounds quite carefully.  But, of course, I didn’t know about any of them, or Upton when I visited which might explain my surprise.

All the photos are by David Marsh (August 2016) unless otherwise stated.

The Drive in 1904 Country Life

Upton now welcomes a large number of visitors so a new car park has been created in the woodland to one side of the main drive.  Formerly you would have driven in through an impressive set of gates and   headed down a wide and straight approach lined with a combination of pines hollies  and yews. 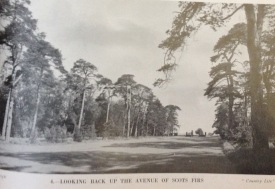 The Drive looking towards the new gates, 1931 Country Life

The drive is now effectively pedestrianized and  leads to the front of the house which is  quietly charming but not  particularly spectacular. The main section dates from  1695, although  there were extensions in the 18th century and then further major modifications in 1927 when the Bearsteads  bought Upton.

North Front of Upton House, © Copyright Kokai 2003 and licensed for reuse under this Creative Commons Licence.

The service court, now of course, a collection of commercial opportunities,

John Sales astutely pointed out that the  planting both around the forecourt and the drive itself is designed to give “an increasing sense of enclosure…[which] has the effect of confining one’s  view of the house to the central older part.”  [Country Life, April 5th 1991]

To one side of the forecourt are the usual outhouses and domestic offices, around a small service courtyard, and passing through that the visitor rounds the side of the house to the garden front.

At first glance the gardens  appear pretty dull and I thought I can see why the Trust don’t bother saying much about them.  Immediately outside the house is a balustraded and flagged terrace, with steps leading down to a large expanse of lawn, framed on either side by trees, whilst in the distance there is a clear view out over the  countryside. The urns in the photo below apparently came from the Chateau of Bagatelle on the outskirts of Paris, built for Louis XVI’s brother, the Comte d’Artois.

The view from the terrace looking south, Country Life 1936

Then you notice  a clump of mature cedars of Lebanon on the right,  but the brain engages and says they are probably just the relics of an 18th or 19thc planting in a garden now long swept away.  It was almost tempting not to bother to go and look at the view.   But  it was nice day I thought it might be nice to see the cedars before finding the tea room, and so set off across the lawn.

What I would have missed if I hadn’t taken that walk.

At the far edge of the lawn, where I imagined it just running into the fields beyond, was a sight that took a few seconds to sink in.  Dramatic is a polite understatement. Completely invisible  from the house, indeed even from two thirds of the way across the lawn,  is a  steep-sided valley which has been partly terraced. 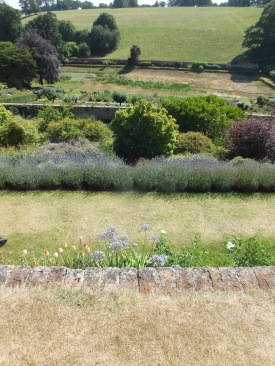 Taking advantage of the south facing slope there are several large colourful flower-filled borders running along the terraces, then below them a huge kitchen garden  and  at the  very bottom a pool, [currently drained to allow for restoration work]. 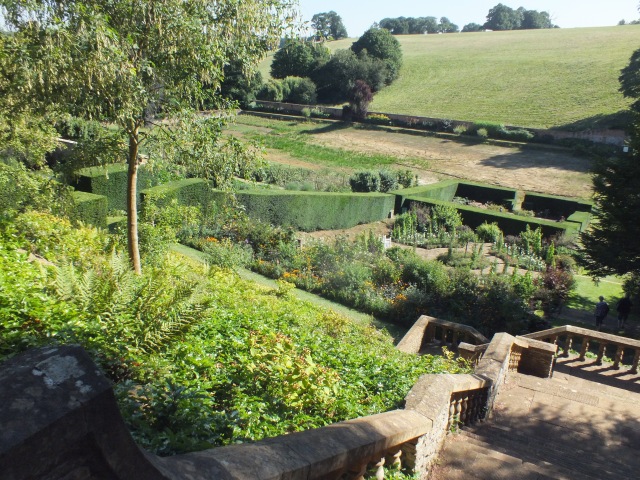 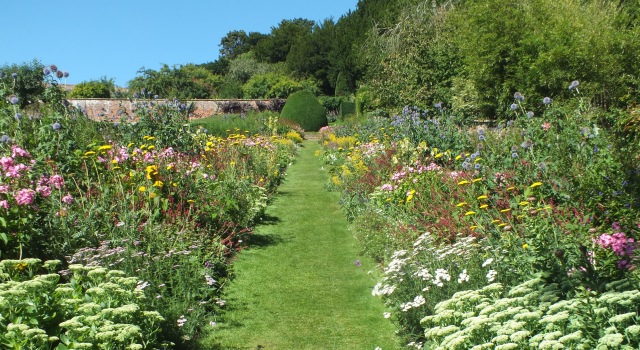 From then on, as I walked around, Upton became more and more interesting in terms of both design and planting. The valley runs not just across the southern edge of the garden, but turns sharply to run all the way along the west side too, showing that the house actually sits on a promontory.  The valley contains a series of interconnected ponds and a magical bog garden with a 17thc banqueting house, [which became the gardener’s house and is now available for rent] overlooking it all.

So who had the vision – and money – to design and layout this extraordinary garden?

The house and gardens viewed from a vantage point now outside the National Trust’s landholding, looking over the mirror pond, to the kitchen gardens and slopes that lead up to the house.         Country Life, 1904

The story really begins in around 1695 when the gloriously named Sir Rushout Cullen, built the house of the local golden-grey stone  He was using his father’s  commercial fortune to make his own mark as a landed gentleman.  Apart from a series of stew ponds, which are probably mediaeval in origin, and which he remodelled, Sir Rushout probably also created the rest of the underlying structure of the gardens.  John Sales, the former gardens advisor for the National Trust thinks it’s “clear that the garden terraces and the whole valley garden were designed at least as much for use as for ornament.” [Country Life April 5th 1991]. Certainly a 1774 estate plan shows that the south facing sloping plots was being used for the production of fruit and vegetables, so with fish from the pond below the household would have been well supplied with fresh food.  Cullen also built the brick wall that runs down the east side of the garden and along its southern boundary on the other side of the largest pond. 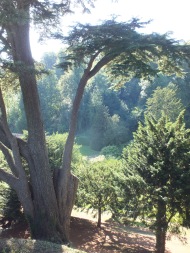 Looking down in the valley through one of the Bumstead cedars

Upton was sold on Cullen’s death to William Bumstead, another London merchant, who enlarged and ornamented the house and developed the park. The cedars and some clumps of trees in the parkland are thought to date from this time.  Its likely this was done with the advice of his neighbour, Sanderson Miller, of Radway Grange. Miller’s diary for 1749 and 1750 record several visits to Upton, and he is traditionally associated as being the architect of a temple now lost, next to a formal lake which is further down the valley in the parkland and outside the National Trust’s current comparatively small landholding.

However,  although  some of the landscaping is in his style, there is no documentary evidence that he actually did any work at Upton.  Indeed according to Jennifer Meir, Miller’s biographer, there seems to have been little love lost between the two of them. (Sanderson Miller and His Landscapes, 2006, pp.165-168) a theory that is supported by Arthur Oswald writing in Country Life in Sept 1936.

On Bumstead’s death the house was sold to Francis Child the banker who also owned Osterley near London. [see post] For the Child family it was merely a secondary residence, used as base for hunting and probably bought as much for the land as anything else, and so the house was usually tenanted. It eventually passed with Osterley to the Earls of Jersey, still tenanted, until eventually it was sold again in 1894 to Andrew Motion, namesake and grandfather of the poet.

Ten years later Upton was the subject of an article in Country Life (10th September 1904) although the unnamed writer says very little about the garden, merely noting that “the nobility of the site [can] be seen in the pictures.” But he was prescient: “With the eye of imagination we may perhaps foresee the day when great terraced gardens may be formed on the inviting slope. Here everything seems prepared for such an enterprise.” 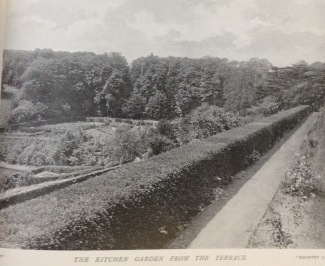 The view from the terrace, Country Life 1904

Elsewhere “the grounds are now very attractively laid out and slope down to the hollow where are six old stew ponds…[which] are a particularly attractive feature of the gardens and reflect in their upturned mirrors the rich masses of the neighbouring foliage.” The whole garden was “pleasing to the present sense, and has the charm of suggesting many things to the imaginative lover of the grand style of gardening.” 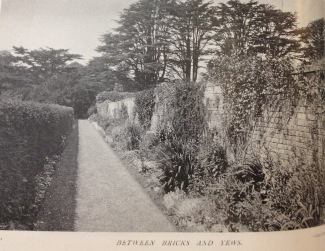 The brick wall that that supports end of  the lawn, Country Life 1904

Sir Rushout’s structure was neglected during the long period of tenancies but it was so rooted in the topography that it was almost indelible. However the garden now has a more sophisticated form thanks to Walter and Dorothea Samuel’s money and taste, the architect Percy Morley Horder’s restrained inetrventions and the planting sense of Kitty Lloyd-Jones… as we will see in next week’s post.

Roughly the same view as in the 1904 photo above but from a lower vantage point. Looking back towards the terraces and kitchen garden over the drained mirror pond.