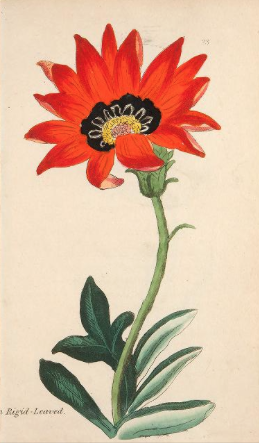 In November 2015 I wrote a post about Augusta Withers, complaining that,  as is the case with many female botanical artists, little was known about her. However by comparison with today’s subject, we had a veritable plethora of biographical information!  Mrs H. M. Moriarty is almost a complete mystery. She published two novels and two editions of a book of paintings of greenhouse plants but other than that I can find very little trace of her. [April 2018 – a little more has come to light!- see below]

Commentators on botanical artists repeat the same few sentences taken from her own  brief introduction to her book of plants but nobody seems to know more. Yet she was presumably reasonably well known in her day, seems to have been well-connected and and her books are mentioned by George Johnson in his 1829 History of English Gardening even though unfortunately he too gives no other information.

So enjoy the little we can say about her, and the pictures – all of which come from her second book, Fifty Plates of Greenhouse Plants [1807]  unless otherwise stated – and  if you think you know anything more get in touch!

When Henrietta Maria Moriarty published her first book The Viridarium or Fifty Greenhouse Plants in 1806, she  was living in a  house on Boley Hill, in the centre of Rochester in Kent. The address is given at the end of the  short dedication to the Dowager Lady de Clifford. She doesn’t spell out her circumstances but I gather from family history circles that she was married with four very young children when her husband died in 1804. She was therefore presumably writing to support herself and her family.

Her choice of dedicatee is significant because the Dowager was not what one might imagine from her rather frumpy sounding title, and I was very surprised that she does not merit an entry in the Oxford Dictionary of National Biography.

Sophia de Clifford was married to Edward de Clifford of Kings Weston, near Bristol, but after his death she moved out and in 1786 rented  Nyn Park at Northaw just north of London before eventually establishing herself  at Dudley Grove, a villa in Paddington. She built up a collection of rare and exotic plants that was often mentioned in botanical magazines, and was responsible for the introduction of several previously unknown species,  most spectacularly Embothrium.

“Only one garden in Europe, we believe, can boast the possession of this rarity, that of the Dowager Lady de Clifford, at Nyn Hall, near Barnet, who received living plants from Sidney Cove, which have not yet flowered. The seeds brought to this country have never vegetated.” (A Specimen of the Botany of New Holland, by James Edward Smith, 1793)  Sophia  was also the dedicatee of Thomas Hogg’s Treatise on the Carnation..and other flowers, 1820.  Amongst other things she became governess to Princess Charlotte, the daughter of George IV.   She’s so interesting that I’d have written a post about her as well  but David Martyn of the Kings Weston Action Group has already done so and I recommend that to you instead.

Mrs Moriarty had a list of subscribers for the book, which is presumably how she paid for the printing, since she published the book herself.  They were an impressive sounding bunch headed by Prince Augustus, the Duke of Sussex and the younger brother of George IV and William IV. He was a man of liberal views and interested in science, and ranger of the royal parks. Did she get his subscription via the good offices of Lady de Clifford, who bought 5 copies herself?  Other ‘illustrious’ names on the list included the Margravine of Ansbach, Lord Willoughby de Broke, the Bishop of St Davids, the Countess Northampton, and a smattering of Ladys as well as an assortment of army officers. Between them they bought 180 copies. 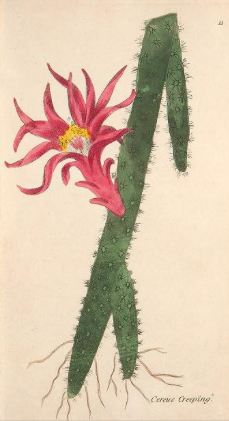 The Creeping Cereus or cactus flagelliformis

Mrs Moriarty’s  50  illustrations are arranged in alphabetical order by their Latin Linnaean name.  They were chosen for “those  who take a delight in plants but have not the advantage of  a gardener who understands them.” However it begs the question where did she get the plants which she chose, since they were exotics requiring conservatory or hot-house conditions, and as young widow writing to earn money she was unlikely to have been able to afford the gardener, the hothouse, let alone the plants themselves.

I wondered at first if she’d got access to Lady de Clifford’s collection, or that of a local botanic enthusiast, but I’m sure she would have said if that was the case. The answer, when I found it, was much simpler.

One critic, James Britten, Editor of The Journal of Botany, writing in 1917, was scathing. “Although Mrs Moriarty speaks in her dedication of ‘the time spent in executing this work’ and in the Preface of having ‘delineated’ the plants, the plates have in almost every case been adapted with slight alteration and with no sort of acknowledgement from Curtis’s Botanical Magazine. I have not checked each one but have compared a sufficient number to warrant this conclusion…”  Britten’s view is attacked in turn by Jack Kramer the author of Women and Flowers: A  Tribute to Victorian Women Illustrators (1996). He argued that women’s art was often trivialized and that Mrs Moriarty’s critics pronounced her work ” too good to be done by the hand of a woman.”

James Britten listed three examples  of where he thought Henrietta had copied, so I thought I’d better check some others.  I’m afraid he was absolutely right. Henrietta Moriarty  may have been technically gifted, but she  was a copyist and rarely seems to have drawn from life. Of the dozen or so images I checked  the  similarities between some of her plates and those in Curtis is absolutely clear, and in the others the differentiation fairly minimal.

As you can see the plate showing Agapanthus umbellatus is very similar with the leaf being reversed as the only major change, so are plates showing Aitonia capensis, Crassula coccinea, Silene ornata, Crotelaria trifloa, Chironia decusata, and Gorteria rigens.

Less blatant  copies are Colutea frtuscens, Caparis spinosa,  Convulvulus cairicus, Buddliea globosa, Cyclamen persicum, and Coronilla glauca. Obviously pictures of the same plant should look similar in some ways but the design of the page, number of flowers and leaves, angle of view, and general style usually give different artists interpretations considerable variety. Perhaps Henrietta was feeling slightly more imaginative on some days rather than others but I have no doubt she always began with the magazine.

Only  one that I looked at, the Aloe variegata,  does not resemble the Curtis image in some way, but in the descriptive note that ccompanied the plate Mrs Moriarty says ‘the plant from which this drawing was taken’ which does imply an original observation.

Nevertheless the images are competent and clear,  and this  was one of the prime intentions of the book. Mrs Moriarty listed as one of her “several subordinate objects… the very obvious use of correct drawings in public boarding-schools.” She was concerned that “those who have the instruction or, I might say, the formation, and even the fashioning of young minds often find it difficult to obtain representations in this most pleasing branch of natural history.”

However she went on to explain a major problem that she faced. The paintings had to be “on the one hand sufficiently accurate” but  ” on the other [they had to be] entirely free from those ingenious speculations and delusions which, however suited to the physiologist, are dangerous to the younger and ignorant.”

What on earth did she mean?  To Mrs Moriarty botany had become nothing less than a moral dilemma.  She knew all about Linnaeus’s system for the classification of plants by  their reproductive parts, but was very clear that such knowledge was  inappropriate for any respectable woman and  nothing short of outright dangerous for a young girl.   So she pointedly chose not to include the separate drawings of the sexual parts of plants – the stamens and pistils – which were by then always conventionally included by  male  botanical  artists.

She wrote: “I have taken as little notice as possible of the system of the immortal Linnaeus [sic], and of all the illustrations and comments on it; nay, I have not once named the fanciful doctor Darwin.”  This is not Charles of course but his dangerously radical father Erasmus.

Of course Henrietta was not alone in this. Most early botanical texts for women and children were equally evasive or omissive.  As Sam George says in her article Carl Linnaeus, Erasmus Darwin, Anna Seward: Botanical Poetry and Female Education: “Darwin, an eminent man of science, could explore human sexuality through the sexual system of Linnaeus but women writers were not at liberty to address such potentially inflammatory issues in such a public way.”

As a result the text that accompanies each plate is very short, bland, and again probably copied from other sources since it only involves a brief outline of advice on cultivation, which she probably did not have personally.

Henrietta Moriarty published a second edition of the book the following year, although she changed the name, but obviously decided this is not where her talents really lay and turned her attention to another form of fashionable writing: the novel.  In 1811 she published Brighton in an Uproar , a novel based on facts and the following year followed it with Crim Con, a novel based on facts.   Both are available to download for free at archive.com should you be so inclined, although having sampled a few pages of each I don’t think they’d make the bestseller list today!

Its a good thing that other people are more patient than me. A copy of Viridarium has been acquired by Princeton University Library, and Andrew Gaub the bookseller from whom it was bought did read through Brighton in an Uproar and concluded that it was a lightly disguised bit of autobiography. I won’t give away the plot here but I do recommend reading the Princeton Library blog about her and the book:

So all in all this is not the post I was expecting to write. Mrs Moriarty isn’t an innovative or pioneering woman creating a new approach to botanic art, but a woman using her talents in whatever way she could to support her family – but perhaps she’s none the less interesting  for that.

You can see thewhole text at: https://archive.org/stream/Fiftyplatesgree00Mori#page/n1/mode/2up