Come into the garden Maud… 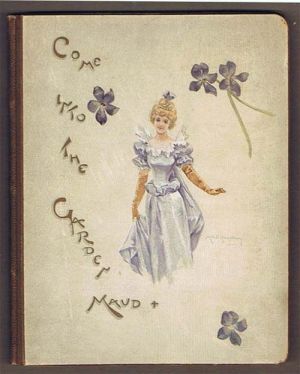 I was looking for a lighthearted piece to counter some of my more recent serious ones, and shortly afterwards happened to be passing the house where Marie Lloyd, the music hall star, used to live. One of her set pieces was the sentimental song “Come into the garden Maud” and I thought it might be fun to research that a bit more and find out why Maud was being invited, and indeed if she ever did end up at the garden gate?

The author…but not their usual look. Any idea who?

Whatever was I thinking? Light-hearted is the last word you would use to describe the background to Maud. It’s not about wannabee  illicit cuddles in the shrubbery as one might imagine from the better known song extracts, but a story based around insanity, sexual frustration, hallucinations, premature death and even murder amongst other joyful themes. Read on if you want to be depressed by the real story behind the song, although there are also some more cheerful comments about the author’s garden.

from an 1877 edition of Maud, anon artist

If you didn’t already know then you might be surprised to hear that the words of this music hall song are by Alfred, Lord Tennyson.  However he didn’t intend it for the stage, and the famous bit is merely a tiny fragment of a long, some might say mightily over-long poem,  that appeared in 1855  in Maud and other poems  his first published collection after becoming Poet Laureate five years earlier. 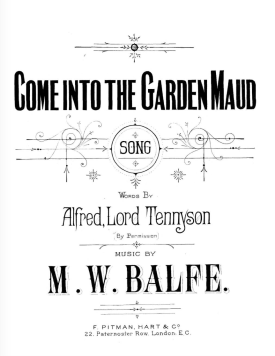 Maud was greeted with horrified  reviews when first published, but several extracts from it, including the well known invitation, became great successes when set to music. The best known setting was also the first. It’s by Michael Balfe, the leading English opera and lyric composer of his day, who also wrote “I Dreamt I Dwelt in Marble Halls”  (from The Bohemian Girl), and  “Excelsior”, wonderful Victorian parlour songs both. If you don’t know them then listen to them at:

Despite the sentimental renderings of the songs, the full poem  Maud is actually a veritable monologue of misery that “expresses Tennyson’s anger at the Mammonism of the age.” [Leonee Ormond, Professor Emerita of Victorian Studies, Kings College].  Its also quite possibly based on   Tennyson’s own  thwarted relationship with wealthy Rosa Baring, from Harrington Hall just a  couple of miles from where he was bought up in a Lincolnshire rectory. For more on the possibilities of that see:

from an 1878 edition of Maud
drawing by H.A Herr

from an 1878 edition of Maud
Drawing by H.A Herr

Maud begins cheerfully with the suicide of the narrator’s father following his financial ruin.  He then switches to pondering his feelings for Maud, a neighbour’s daughter – is she worthy of him –  is she potential wife material?   It’s all made more complicated because he thinks her father profited from his father’s problems.  Then there are tensions in Maud’s family over who should be allowed to marry her. They resolve it should not be the narrator and throw a ball for the suitor they wish to encourage.

The narrator sees a rose floating in the brook that flows from Maud’s home past his – and this being a romantic poem [in theory] – thinks that she has sent it to him as a message to wait for her in the rose garden on the night of the dance… so guess what…  he waits at the gate alone. Somewhat surprisingly perhaps Maud does appear but so does her brother and after a scuffle the poet kills him!

He flees to France where later he hears  that Maud has also died – news that drives him temporarily mad. When he recovers he joins the army and goes to fight in the Crimean War. [Another poem in the collection was The Charge of the Light Brigade]

Thank goodness I’m not a literary critic or I’d have to think of intelligent sounding ways of telling you what you can obviously see for yourself, that Maud is a very joyful piece!

We can now move onto less gloomy ground. Maud was written at Farringford, the house Tennyson was renting near the Needles on the Isle of Wight. Sections of the poem  reflect the locality, including the account of how, having caught a glimpse of Maud, the speaker stands in his ‘own dark garden ground’ and hears the sound of the sea. 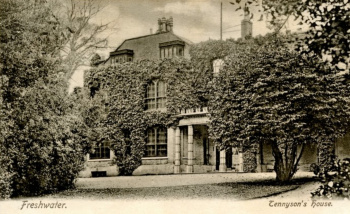 By the time Maud was published Tennyson was earning more than £2000 a year from his writing  which was enough  to be able to buy, rather than rent, the 100 acres estate, and  so for £6900 Faringford became his home until his death in 1892.   It was a rambling and isolated neo-Gothic heap close to the sea with woodland rising up the hill behind the house or as he said himself : “

The Primrose Path of Dalliance at Farringford, by Helen Allingham from http://freeread.com.au/@rglibrary/GKChesterton/Biography/Tennyson.html

On the day the Tennyson’s moved in in 1856  “in the midst of all confusion while all imaginable things strewed the drawing-room, and the bookshelves were bare and the chairs and tables dancing” Prince Albert arrived unannounced. He went all over the place, seemingly charmed with everything he saw, and left carrying a large bunch of cowslips which had been gathered in the park by one of his attendant gentlemen, and which he said he would have made into cowslip wine for the Queen.” [Emily Tennyson’s Journal]

Emily clearly loved it:  “Went to our withy holt: such beautiful blue hyacinths, orchises, primroses, daisies, marsh-marigolds and cuckoo-flowers. Wild cherry trees too with single snowy blossom, and the hawthorns white with their “pearls of May.” The park has for many days been rich with cowslips and furze in bloom. The elms are a golden wreath at the foot of the down; to the north of the house the mespilus and horse-chestnut are in flower and the apple-trees are covered with rosy buds. A. dug the bed ready for the rhododendrons. A thrush was singing among the nightingales and other birds, as he said ” mad with joy.” At sunset, the golden green of the trees, the burning splendour of Blackgang Chine and St Catharine’s, and the red bank of the primeval river, contrasted with the turkis-blue of the sea (that is our view from the drawing-room), make altogether a miracle of beauty. We are glad that Farringford is ours.” Emily Tennyson cited in  Alfred Lord Tennyson. A Memoir by his Son, Hallam Tennyson,  1897.  This can be found in full at:

In the Kitchen Garden at Farringford, by Helen Allingham from http://freeread.com.au/@rglibrary/GKChesterton/Biography/Tennyson.html

Tennyson built himself a summer-house  [sadly now gone] in the kitchen garden for writing, and then painted murals of monstrous sea creatures on the windows!   When Queen Emma of the Sandwich Islands [Honest! Google her to find out more!] came to stay in 1865, having walked with her over the Downs Tennyson hid her from unwanted callers  there –  as she put it – ‘amonsgt the cabbages’. 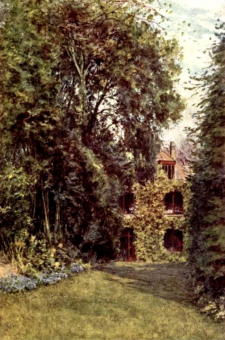 Glimpse of Farringford from the Upper Lawn by Helen Allingham
from http://freeread.com.au/@rglibrary/GKChesterton/Biography/Tennyson.html

Alfred also did much of the physical work  in the garden, such as cutting and rolling the extensive lawns  himself.  Visitors reported that he could be found digging and weeding and he wrote that “I don’t quite like children croquetting on that lawn. I have a personal interest in every leaf about it’.

The garden was ‘careless ordered’ to quite an old-fashioned plan rather than the more formal style coming back into fashion in the 1850s, and it is recorded in a few photos but also a series of paintings by Helen Allingham.

Arbor in Farringford Kitchen Garden by Helen Allingham from http://freeread.com.au/@rglibrary/GKChesterton/Biography/Tennyson.html

These were published in The Homes and Haunts of Tennyson in 1905.  The garden also features in several passages  from Tennyson’s poems.

In the Kitchen Garden at Farringford, by Helen Allingham from http://freeread.com.au/@rglibrary/GKChesterton/Biography/Tennyson.html

For example in  ‘To Ulysses’, Tennyson writes of:

My cedar green, and there

When frost is keen and days are brief

– Or marvel how in English air

My yucca, which no winter quells

Although the months have scarce begun,

Has pushed toward our faintest sun

A spike of half-accomplished bells. 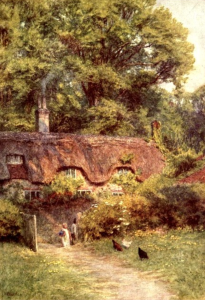 The Dairy and Home Farm at Farrington by Helen Allingham  from http://freeread.com.au/@rglibrary/GKChesterton/Biography/Tennyson.html

In ‘The Flower’ he writes of  heartsease, grown from seeds he’d planted in the garden himself:

Once in a golden hour

I cast to earth a seed.

Up there came a flower,

The people said, a weed.

To and fro they went

Cursed me and my flower. 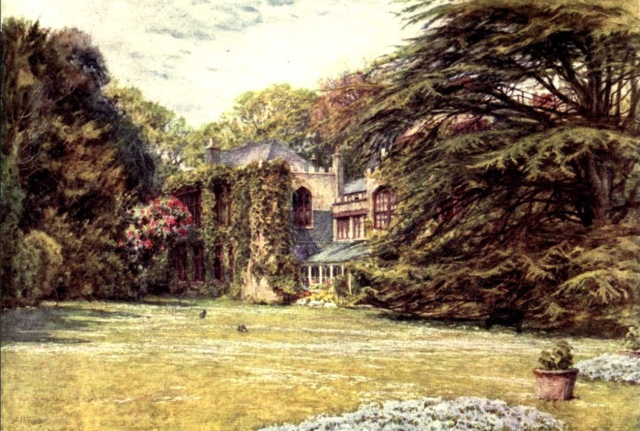 When the yews in the garden flowered, and  their pollen blew around them like smoke,  it provided inspiration for another passage this time in The Holy Grail.  ‘There has been a great deal of smoke in the yew-trees this year. One day there was such a cloud that it seemed to be a fire in the shrubbery”. [Emily’s Journal April 18]:

‘O brother, I have seen this yew-tree smoke,

Spring after spring, for half a hundred years’.

The Tennysons were the centre of a vast literary, artistic  and social circle. Farringford was always full of visitors, and a list reads like a roll call of the Victorian great and good. Apart from Prince Albert, there were the artists Richard Doyle, Holman Hunt, Millais, G.F. Watts the writers Edward Lear, and Charles Dodgson (Lewis Carroll), Longfellow and Oliver Wendell Holmes, the actress Ellen Terry and the composer Sir Charles Parry. 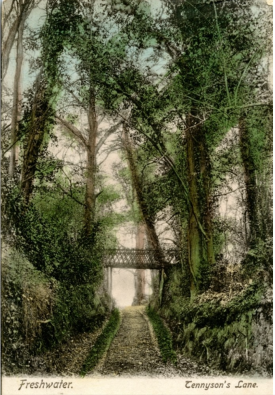 Some like Garibaldi who went in 1864 left their mark. He was asked to plant a Wellingtonia which had been given to Alfred by the Duchess of Sutherland “and raised y her from a cone that had been shot from a tree 300ft high in California”.  [For more on these trees see Wellingtonias] Tennyson was then to write of:

The waving pine which here

The warrior of Caprera set,

A name that earth will not forget

Till earth has rolled her latest year 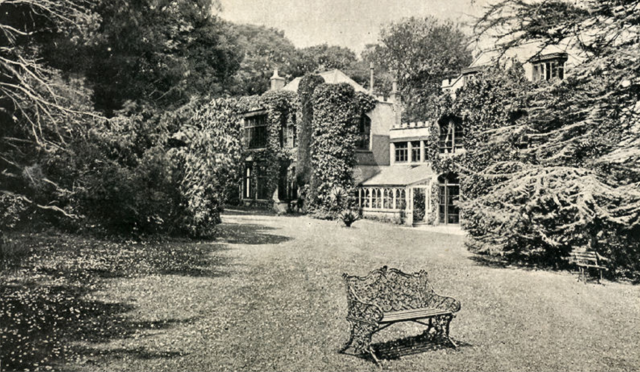 After Tennyson’s death in 1892 the house passed to his eldest son Hallam, and then in 1928 to his younger son Lionel. But Lionel had no great interest in it and in 1935 advertised it for rent .

Amazingly  it was not occupied by the military during the war and in 1945 it was bought by British Holiday Estates Ltd and the following year opened as a hotel  with 6 cottages designed by Clough Williams Ellis built in the grounds. 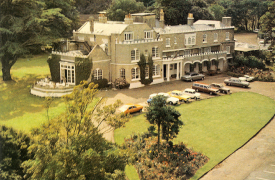 The house in c.1970 from http://farringford.co.uk/tennyson/postcardsfromhistory.htm

In 1960 Farringford was sold to Fred Pontin, the holiday camp king, but then changed hands several times more until in 2007 it was bought by its current owners, who are in the process of meticulous restoration of both the house and grounds, removing many of the accretions and additional buildings put up in the preceding half century. What they are doing is a real labour of love and is detailed on their comprehensive website and blog. More power to their elbow!