A conversation with Arthur Devis 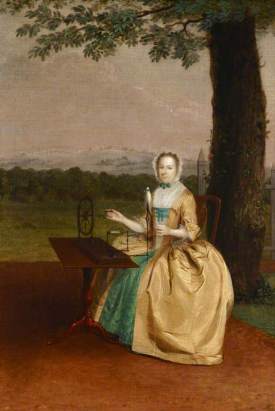 In the early 18thc a style of portraiture developed, known as the conversation piece, which often depicted the sitter or sitters outside in a garden or parkland setting.

The greatest exponent of this style was Arthur Devis, who painted the rising gentry and professional classes of Georgian England at ease in and around their own homes and estates. 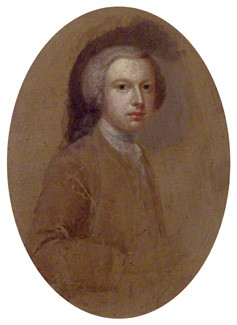 Self portrait by Arthur Devis, circa 1742-1744, NPG http://www.npg.org.uk/collections/search/portrait/mw08137/Arthur-Devis?LinkID=mp05956&search=sas&sText=devis&role=sit&rNo=0

Given that we are used to using paintings of gardens and landscapes as good evidence for the appearance of a site when the picture was undertaken,  can these conversation piece portraits be trusted to give us a truthful idea of the 18thc garden?

Read on to find out more about Devis, and the reliability [or maybe not!] of his work as useful evidence… 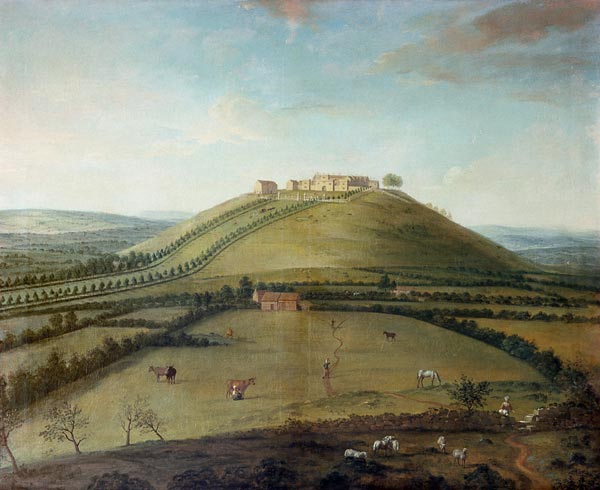 Arthur Devis was born in Preston in 1712 and as a young man was taught by  the sporting and topographical landscape artist Peter Tillemans.  He would have learned by  copying fashionable pictures, particularly classical Italian landscape paintings which were already beginning to  influence architecture and garden design.  However Arthur quickly developed his own style, more naive than romantic, the earliest known surviving piece being a birds-eye view of Hoghton Tower in  Lancashire (1735)  for which he was paid six guineas.  A second early landscape, of the newly built Hornby Hall (1736), gives a touching insight into the  formal garden there, with  the owners being presented with a bouquet by their gardener to celebrate their moving in. 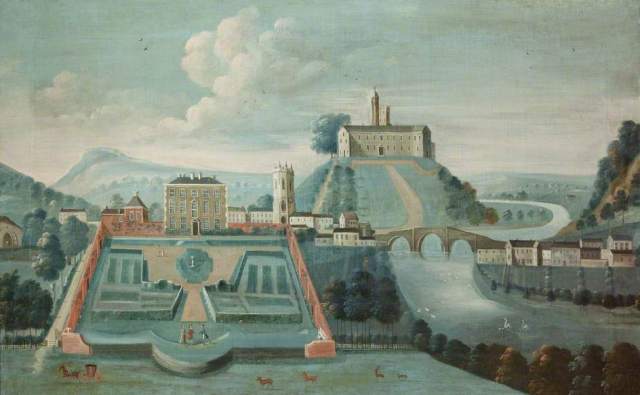 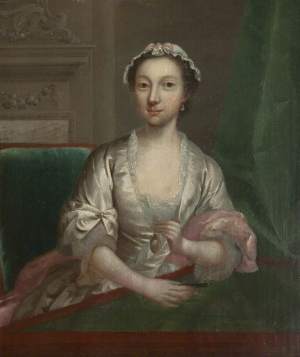 By 1742, Devis was in London where he married Elizabeth Faulkner and was soon living  in Great Queen Street, in Covent Garden.  The couple had 22 children although only six survived childhood.

However landscape soon took second place in his repertoire as he switched to portrait painting …but portrait painting with a difference. These were not the standard rather stuffy posed pictures which copied the style of court portraiture but in the comparatively new genre of  the conversation piece. This was to become his speciality. 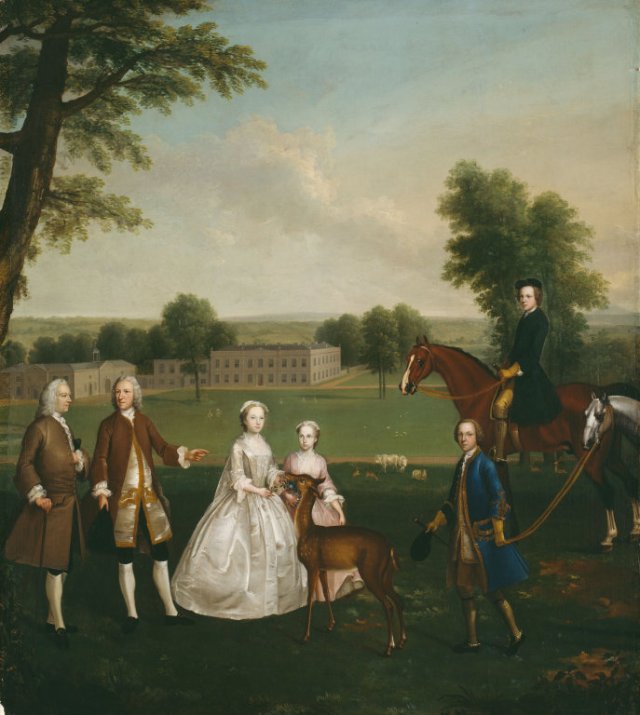 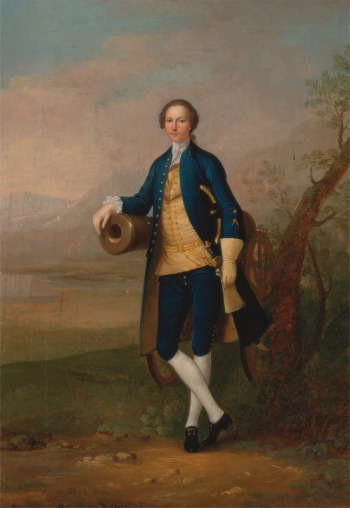 It’s a much more cosy domestic style of portraiture with pictures generally smaller in scale and showing the subjects posed informally, and often surrounded by their possessions. Rather than being in anonymous studio settings they are depicted in their own home or outside in their garden or a rural landscape setting.

The Lister Family are shown in front of their newish mansion, built in 1724, the grounds of which are remarkably bare and devoid of gardens, apart from the their own  distinctive breed of white cattle which are prominent in the middle distance.

The Gentleman with the Cannon has a military encampment in the background and so was probably an army officer, perhaps even the future General Burgoyne, commander of the British forces in the War of Independence  who was stationed in Preston in 1740/1. 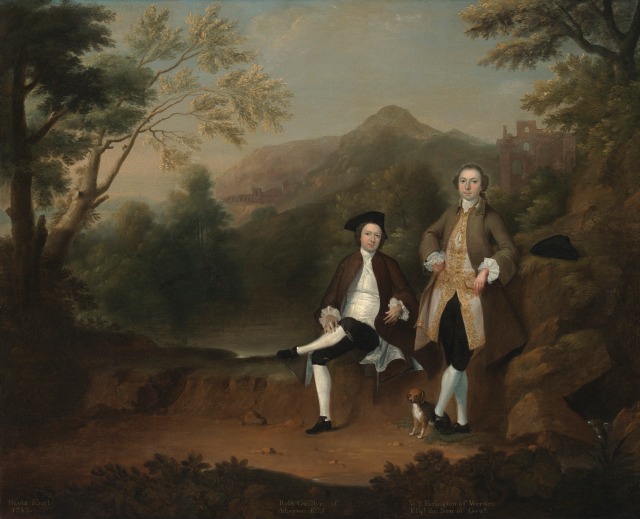 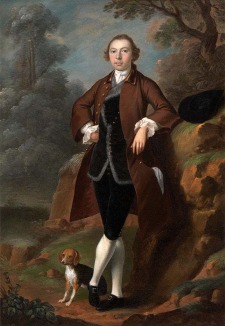 The portrait of two friends “in conversation” (above) hung in the dressing room of Sir William Farington, who presumably commissioned it. It is a wild and probably imaginary landscape with its ruined temple on the right and hill village [?] on the mountain in the centre. Both Farington and Gwilym were the subject of other portraits by Devis, and it is thought they gave each other copies or versions of pictures they themselves commissioned. [Farington certainly gave the painting on the right to Gwilym]

Conversation pieces became fashionable from the 1720s being taken up by Hogarth and later Gainsborough and George Romney, as well a lot of provincial painters, but it was Devis who appears to have been the most prolific with over 300 surviving paintings ascribed to him. 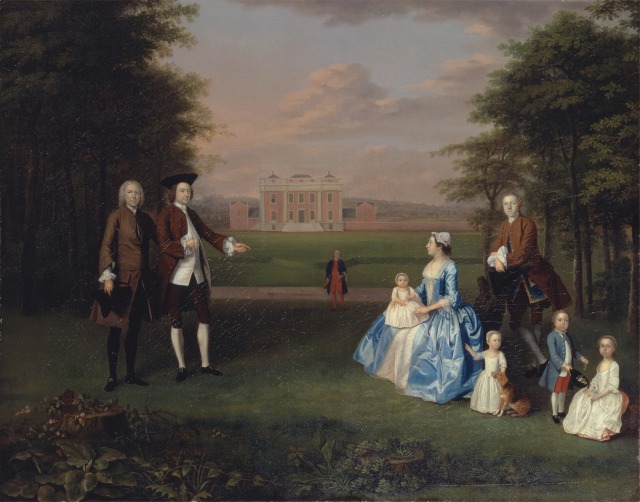 Robert Gwilym of Atherton and his family, c.1745
http://collections.britishart.yale.edu/vufind/Record/1668347

They are, however, not necessarily drawn from life. 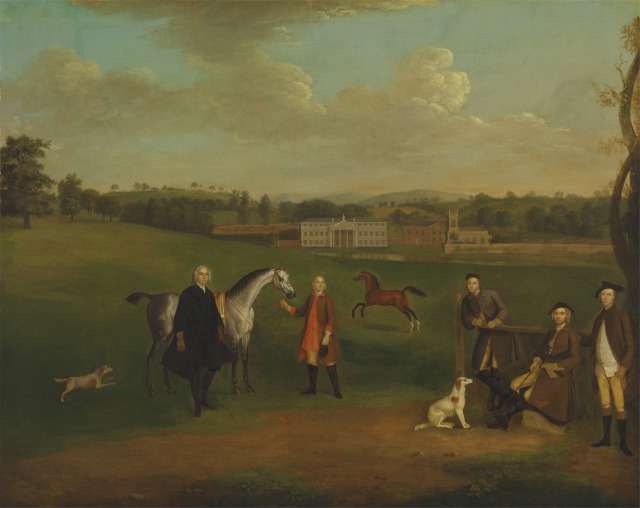 Okeover Hall, for example,  was the subject of several revised sets of architect’s drawings, but was eventually built  to a different design from the one painted by Devis.  It is known from letters that he had been given one set of drawings, but the owner finally chose another style, and the painting is the only record of the rejected design. It does make you wonder then why the owner hung the painting on the wall rather than having the picture ‘corrected’. 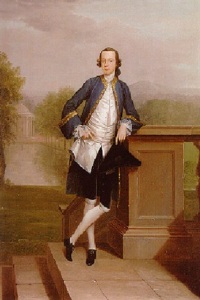 Although Devis was based in London, while he was establishing his reputation,  he travelled widely, particularly back to his native Lancashire. His sitters ranged from the landed Tory gentry like Farington and Gwilym through to wealthy professionals.

They often display the ‘polite’ attitudes found in contemporary manuals of etiquette rather than being   ‘natural’ or ‘lively’ portraits in the style of his contemporaries like Hogarth.  Devis doesn’t aim to show the sitters personality but their status. 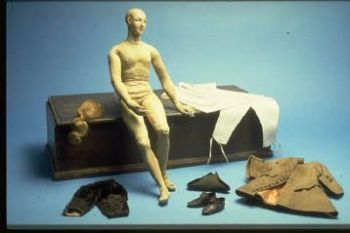 He  does not seem to have been a particularly confident figurative artist and  he used a lay figure or small wooden manikin which could be dressed and posed. This can still be seen in the Harris Museum in Preston. Yet he was exceptionally good at the subtle detailing of textures and surfaces, making things textiles and furnishings appear realistic. 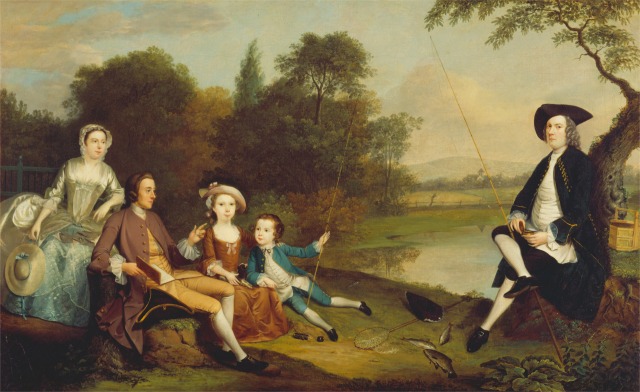 But, of course, for the garden and landscape  historian what is most interesting are his external settings where he usually displays great clarity and detail, especially since, apart from Gainsborough, Devis is the 18thc artist who is most concerned with the landscape as well as the sitter.   These family portraits,  of the Swaine family  above and Sir Joshua Vanneck’s family below may appear stilted and contrived, but, like the Stoke Edith hangings featured in a recent post,  both provide useful insights for showing how these elite gardens were used. Several of his portraits are accurate enough to be identified, implying that either Devis had been on site or had access to a well drawn topographical print. One such is his 1759 portrait of Philip Howard  on his estate at Corby Castle near Carlisle. 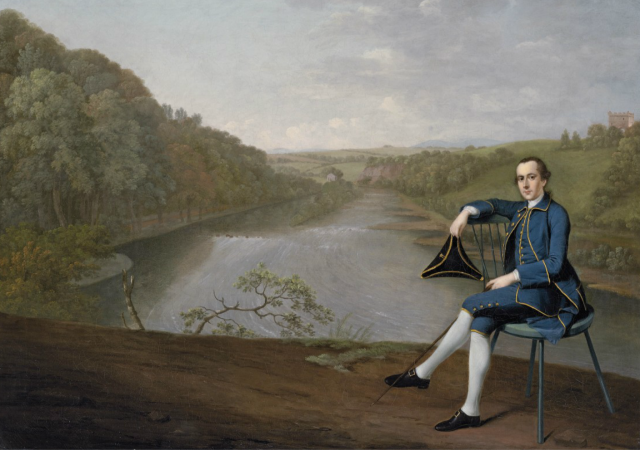 Howard is portrayed sitting at the edge of the the River Eden which runs through the grounds. In the far distance, on the left bank, is a small temple which marked the southern boundary of the formal garden layout. The long thin island in the centre of the river was originally constructed by the monks of nearby Wetheral Priory, to help them catch salmon.  for which the river was celebrated. The gatehouse, the only part of the priory to survive the Dissolution, has been incorporated into the landscape as an eye-catcher on the hill to the right.

But others, and his biographer suggests the majority,  are as contrived and imagined as his interiors In the portrait of Sir George and Lady Strickland,  for example,  the coastal landscape round  their home, Boynton Hall,  is low-lying so Devis  added  hills and increased the length of the  prospect – perhaps of course to satisfy the ambitions or demands  of the sitter.

There are also two portraits of Sir John Shaw of Eltham Lodge in Kent [now south east London] One is a typical piece with the family posed in the grounds with house in the background, and with their carriage tent and animals on display. 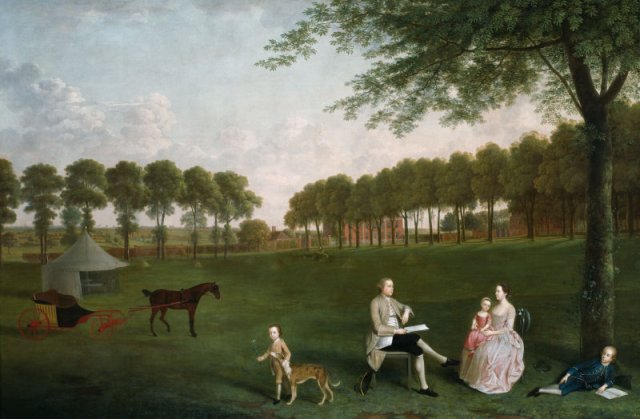 Sir John Shaw and his Family in the Park at Eltham Lodge, Kent, 1761
Art Institute of Chicago, http://www.artic.edu/aic/collections/artwork/75393 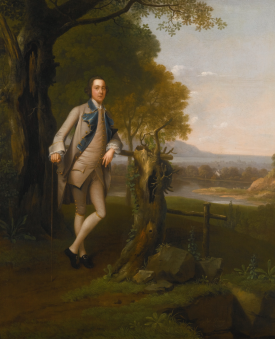 The other has Sir John leaning philosophically on a fence in front of a picturesque landscape. This is probably more imaginary as, as far as I’m aware, there aren’t that many mountains in Kent!

By the 1750s Devis had developed a slightly different approach, setting his subjects landscapes without much in the way of possessions.  This had the effect of allowing the onlooker to  see the landscape with less ‘inbuilt’ association and perhaps engage with it more directly and  emotionally.  It helped capture the increasingly ‘fashionable’ mood of the romantic and picturesque,  particularly  when he employed  symbolic features such as caves or weeping willows. If the sitter was alone it also added  a sense of solitary communion with nature. 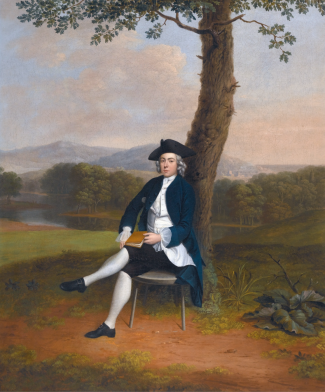 Portrait of an unknown gentleman
http://www.sothebys.com/ru/auctions/ecatalogue/2013/old-master-british-paintings-day-sale-l13034/lot.172.html

The mid-18thc saw a lot of changes to the way that professional artist worked. Direct patronage by commission declined,  with more artists holding public exhibitions offering works for sale, as was already happening in Paris.  Groups of painters were set up, some prestigious including the Society of Artists  and later the Royal Academy, others less so such as the Free Society of Artists with whom Devis exhibited  in 1761.

Now that artists could show their work relatively freely they could experiment with new styles and genres and the conversation piece went into decline.  Devis was not sufficiently versatile to change his approach and switch styles, so gradually found himself unable to compete with more fashionable contemporaries such as Zoffany or Benjamin West. 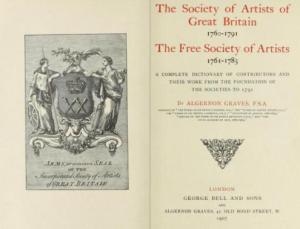 But he continued to paint and  became more involved with the Free Artists being elected their President in 1768 the year the Royal Academy was set up. Horace Walpole was vitriolic about exhibitions staged by the Free Artists: “This is an execrable imposition and half the pictures old rubbish.” From then on it was downhill all the way. [For more on the Free Artists follow the link on the left.]

Devis was soon not only not fashionable but not even acceptable. There is a story told by his biographer about the young Duke of Devonshire offering a portrait of himself to his tutor, by any artist the tutor chose.  Unfortunately, according to the Duke in a letter to his sister,  “he desired it might be by one Mr Devis of Queen Street, because he makes all his pictures of one size which suits his rooms…I am much afraid it will be frightful for I understand, his pictures are all of a sort; they are whole lengths of about 2 feet long & the person is always represented in a genteel attitude, either leaning against a pillar, or standing by a flower pot, or leading an Italian greyhound on a  string, or in some other ingenious pose.”  In other words this sort of thing which had been alright ten years earlier [Devis had painted the Earl of Lincoln, like Sir John Shaw,  with a greyhound] was now only alright for the lower orders. 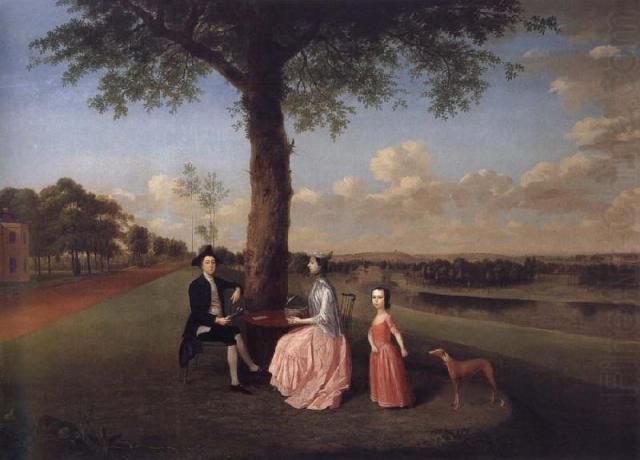 The Duke agreed to his tutor’s choice: “he will submit quickly to whatever the painter pleases but will take great care not to give any opinion of his own, that he might not be answerable for any of it’s absurditys.”  It was a case as Samuel Johnson put it that “all works which describe manners require notes in 60 or 70 years, or less.” Devis’s style of work had passed its sell-by date. 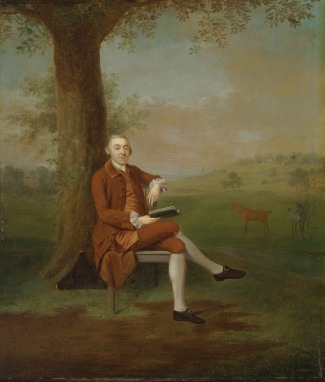 The result was that Devis exhibited less and less, and although he took on pupils, he ended up  reduced to painting pictures on glass and restoring and cleaning pictures – most famously the Painted Hall in the Naval Hospital at Greenwich.

In 1783 the family moved to Brighton and there was an auction of  ‘Pictures belonging to Mr. Devis of Great Queen Street, Portrait Painter and Picture-Cleaner’. He died in Brighton four years later although he is buried at St Mary’s Paddington.

After that his reputation, as so often, rapidly declined and he wasn’t ‘rediscovered’ until the 1930s. A further re-evaluation followed the research of Ellen D’Oench in the 1970s which concluded that Devis was “a master of his special craft, that of describing, in small compass, the ideals of a privileged society”.  He also “made a permanent contribution to an indigenous English tradition, the portrait in the landscape.” 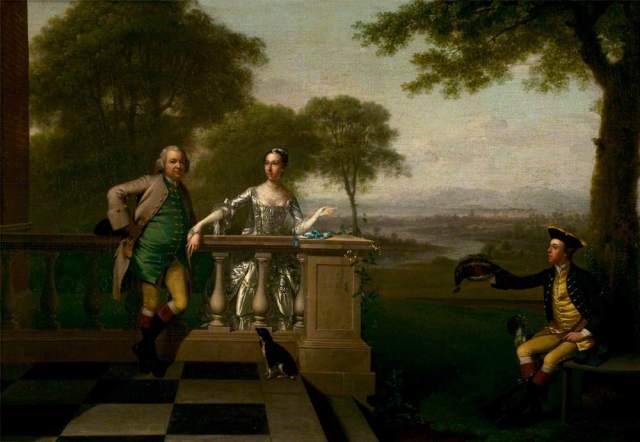 Edward Gordon, His Sister Mrs Miles, and Her Husband in Their Garden at Bromley                Leicester Arts and Museums Service;   http://www.artuk.org/artworks/edward-gordon-his-sister-mrs-miles-and-her-husband-in-their-garden-at-bromley-81534

If you want to know even more about Arthur Devis then good places to start would be Ellen D’Oench, The conversation piece: Arthur Devis and his contemporaries (1980) [exhibition catalogue, Yale U. CBA, 1 Oct – 30 Nov 1980] ·

His archive and many of his works are  held by the Harris Museum and Art Gallery, Preston,