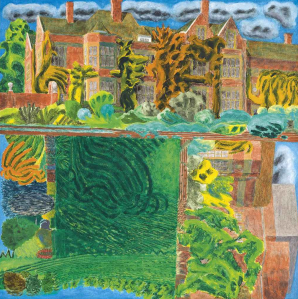 The Four Seasons of Glyndebourne, Christies.com

We’re used to seeing paintings of gardens in an historical context and using them as evidence, but I don’t think we take as much notice of contemporary representations of gardens as perhaps we should. I was reminded of this the other day when I saw a notice for an exhibition at Hall Place, a beautiful Tudor house in Bexley which I’d written about on here.

It was for a retrospective of the work of Adrian Berg an artist whose work I didn’t know, but I liked the image used on the poster so looked for some more information about him. In the process I  bought myself a book about contemporary artists whose work involves the garden. Flicking through and finding Adrian Berg there I also realised I had written on here about Ivor Abrahams, one of the other 21 painters covered by the book. I also realised that I recognized only a couple of other names and just one or two particular paintings. I’ve certainly missed out…

Perhaps it’s not surprising that I hadn’t heard of Berg. As his obituary in the Telegraph said in 2011 he “never courted publicity, and was therefore never as well known to the public as some of his more flamboyant contemporaries”. Yet he was an Royal Academician and I’ve been a Friend of the RA for about 30 years so I did feel a little abashed, especially as his work is so bold and exuberant, and at the same time so meticulous at capturing the genius of the place.

This is particularly important as “his work celebrated nature in its most cultivated form, and throughout his life he was fascinated by England’s parks and gardens; among those he recorded were Windsor, Kew, Dartington, Nymans, Stourhead and Sheffield Park.” [Telegraph, 26 October, 2011)

January to December , 1967 from artnet.com

The son of an eminent psychiatrist Berg was educated at Charterhouse where he won prizes for drawing and then went on to read medicine at Cambridge. But after a year he switched courses and read English instead.  National Service followed and offered more artistic opportunities. He later wrote: “panoramic drawing was something I learnt training as a national serviceman. It was 1948, just after the war. I was still in my teens. We were taken out into the country, sat down, and told that the enemy was lined up behind what we were facing. Our job was to penetrate the camouflage with pencil and paper – to indicate possible gun emplacements.”  Whether this was sufficient encouragement who knows but after his time in the army was over  he switched career paths again and enrolled at St Martins School of Art , then Chelsea and finally th Royal College of Art where he met Paul Huxley and David Hockney.

Later he was to return to the panorama, to try and capture the vast land and skyscapes of Lake District,  but also to record much smaller sites such as Queen Mary’s Garden in Regents Park and the gardens of Levens Hall.

While he was still a student he saw an exhibition at the Tate of the late works of Claude Monet. Monet had fallen out of fashion after his death and this was the beginning of his re-emergence as a major figure in art history.  Berg maintained all his life these were the best paintings he had ever seen.  Not just the colour, but the plan of treating subjects in series – haystacks, poplars, Rouen Cathedral and the lily pond in the garden at Giverny   “Nothing bettered Monet’s Post-Impressionist paintings of his garden,” he wrote in a 2008 exhibition catalogue and he learned the value of returning to the same place over  and relooking, reimagining and reworking the same subject over and over again, sometimes over years. 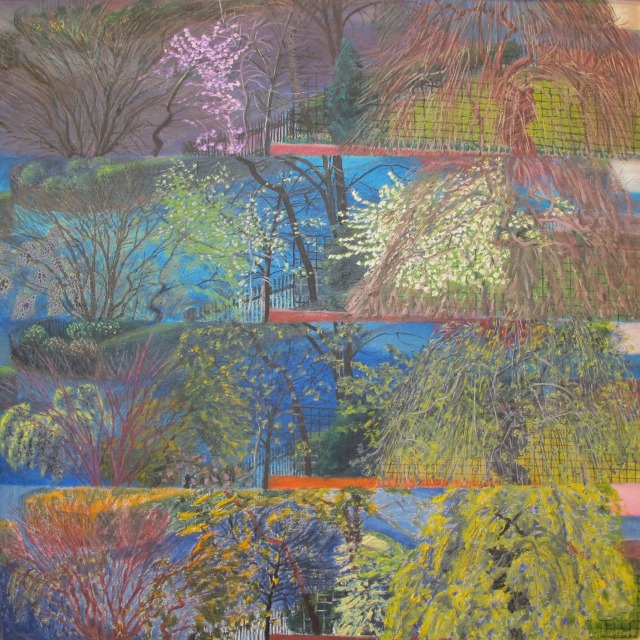 The first place he tried to do this was the view from his  studio window but since his studio was in Gloucester Gate, the view was of Regents Park.  Here he painted the same view in what the Guardian said was “a map-like grid, with the same view in each segment of the grid, but at a different time of year.”

“Or the canvas would fall into narrow horizontal “seasonal” strips, subtle and beguiling. Occasionally the grid would be the window literally rendered, divided by mullion and transom bars.” [Guardian 4th Nov 2011] Regent’s Park, as seen from the artist’s studio, Tate

He even devised a method of painting four different views on a square canvas that merged together and so could be hung from any side because he didn’t use any conventional perspective but rather derived an alternative view of it from Islamic carpets.

Variations of that view emerged over the  nearly 25 years he occupied the studio.

But he explored and developed sustained visions of other places too. The Lake District was one, Kew Gardens another along with  the gardens of Stourhead, Wakehurst  and Sheffield Park and even towards the end of his life, Beachy Head. 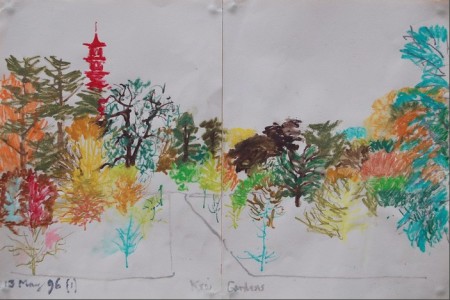 He examined the effects of the seasons on the gardens and landscape, tried different techniques, paints and colouration all to get the most of out of the site’s possibilities – always trying to engage with the genius of the place. 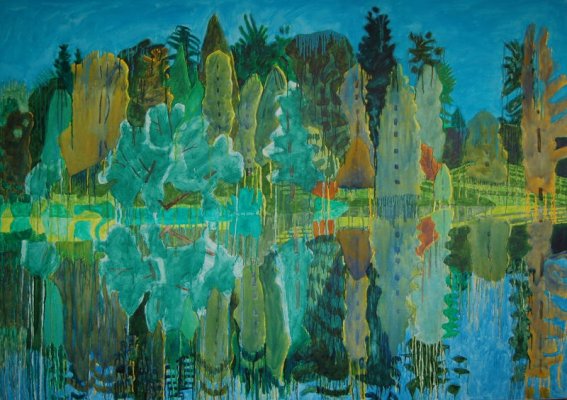 Over the years the  National Trust also commissioned him to paint a series of paintings of several of their properties. Those in the Lake District, those on the Isle of Wight and above all Stourhead where he concentrated on the changing seasons around the lakeside. 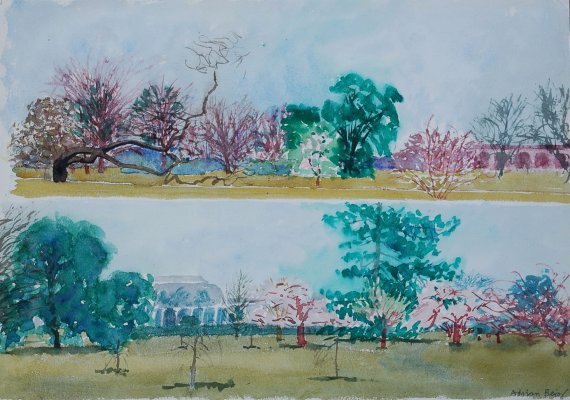 He experimented with minimalism and Abstract Expressionism  but felt “there was a sacrifice of emotional significance” and so he returned to traditional ways of looking, sketching, drawing and painting, usually on the spot.

Adrian Berg finally exchanged his home at Gloucester Gate for a house in  Brighton in 1985 “where he became locally famous as an eccentric, bent double with an arthritic spine, shuffling out to work, on his back a frayed rucksack as ancient as himself, stuffed with protruding brushes.”

He was as the Telegraph coyly out it “unmarried” but that’s because he lived with his partner, Mike Osmund, for 37 years until Osmund’s death in 1996. 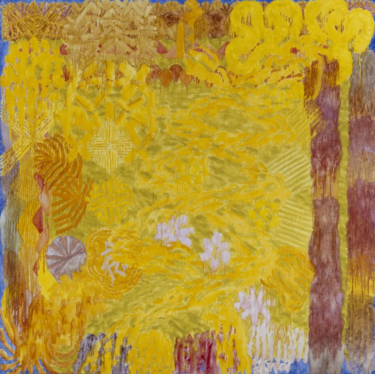 Berg was elected an academician in 1996 and gave the painting on the left as his diploma piece telling theacademy that  it would be his last depiction of Regent’s Park.

In 1999 he was provided by the Tate with a studio assistant, Sam Clarke, who facilitated a tour of the Antipodes, where, inspired by the lush foliage, Berg expanded his range, creating opulent works luxuriating in colour and form; he cited his main influences as Monet, Matisse and Bonnard.

Soon after he died the Pallant House Gallery in Chichester held a memorial exhibition. The curator, Simon Martin, knew him well and wrote about him on his own blog . He was” the leading British painter of our public parks and gardens… his use of colour was distinctive and vibrant, but his paintings went beyond being just sensuous renditions of verdant foliage and flowers – they were carefully considered paintings about looking itself.”

If you want to know more about Adrian Berg…then follow the links under any of the pictures as a starting point or better still why not go to Hall Place and see his work for yourself!

And finally I’d recommend the book I mentioned in the opening paragraph – it’s called  Garden Painters  by Ariel Luke, and it was published by A&C Black in London in 2009.