The creation of a new public garden should be a cause for celebration, perhaps in these days of austerity,  even amazement. When it’s in the very heart of the City of London then the amazement should be unconfined.  So what to make of the Sky Garden  at 20 Fenchurch Street?

According to its website  it is “a unique public space that spans three storeys and offers 360 degree uninterrupted views across the City of London. Visitors can wander around the exquisitely landscaped gardens, observation decks and an open air terrace of what is London’s highest public garden.”

It opened in January 2015 and I took friends to see it a few days ago. [All the photos were taken then by me unless otherwise credited.] There’s no doubt the  concept is exciting, and some of the claims are true but other bits of the hype are almost enough to cause hyperventilation as you will discover as you read on…

One of many You Tube videos about the Sky Garden 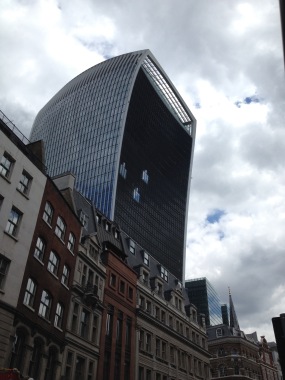 20 Fenchurch Street is the formal name for the building popularly dubbed The Walkie-Talkie. It was designed in 2004 by Rafael Viñoly, a New-York based Uruguayan architect  and overturns the idea that buildings have to be smaller at the top than on the ground. Its floorplates get larger as you rise up through the building and the top floor ‘overhangs’ by 13m.  With  38 storeys rising to 160m [525 ft] it is one of the tallest buildings in the City, providing a massive  690,000 sq foot of office space. The top floors contain a restaurant and bars …. and the Sky Garden, designed by landscape architecture practice Gillespies. 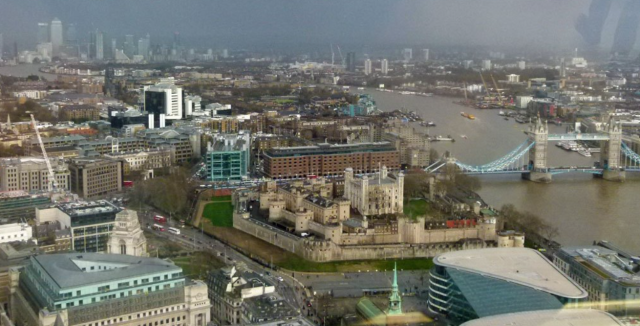 The Tower of London seen from the Sky Garden

Such is the madness of property speculation in London that The developers, Land Securities, demolished one of the City’s earliest high-rise blocks which was a mere 91m high and only built in 1968 to build something even bigger.  Originally planned to be  nearly 200 m (656 ft) tall there were so many objections  including from English Heritage  whose planning director told the public enquiry that  it would be London’s “ugliest and most oppressive building”.  Most complaints, including that from UNESCO were about its potential visual impact, particularly on the the Tower [which it dwarfs] and nearby St Paul’s that it forced a rethink.

St Paul’s from the Sky Garden

And as with several other recent new developments, clearly no-one had given much thought about its impact on other views!

Tower Bridge, viewed from downstream, as it now appears with 20 Fenchurch Street ‘crashing’ into the view behind it. Photograph: Antonio Zazueta Olmos/Observer

Even at the lower height the development was only allowed after a public enquiry in 2007, and no sooner was the building finished than more complaints started to pour in. There were problems with high wind forces at street-level, and with solar reflection which created scorching conditions at ground level, that damaged cars and fried eggs at pavement level. Then to cap it all the Walkie Talkie was, in 2015, awarded the Carbuncle Cup for the worst new building in the Britain. 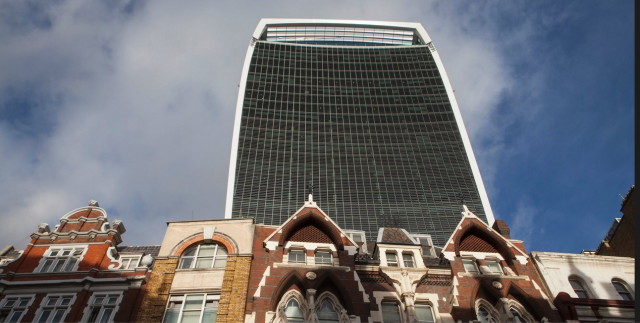 So it didn’t get off to a very good start!  And it has attracted very mixed reactions ever since. There is no doubt that the views are spectacular. That’s partly because the Walkie-Talkie is outside the main areas designated for high-rise developments in the City and so, with no other high buildings to block its outlook it commands staggering views particularly south across the river and west towards St Paul’s and central London.

The view south from the open balcony 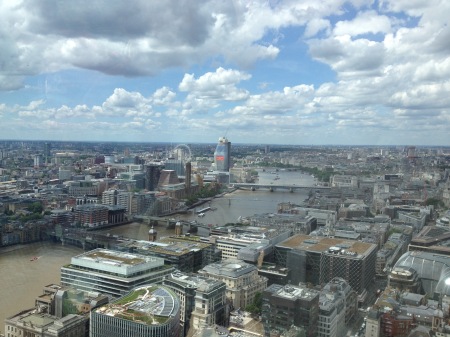 The view west down the Thames,

The developers finally got permission partly because of the previous high-rise development on the site but also because they promised  a new public park.  Planning gain was a key factor in their gaining approval.

But please note the word “public”.

The lower level of the atrium

A cross-section from the original plans

It was supposed to have been a stepped series of gardens rising over the entire height of the space. At the lowest level, on the southern side looking towards the river, there was to have been dense planting, including large trees. Modifications were proposed in 2008 but there were still trees and four separate garden areas, some with paths winding through them, and it was suggested that visitors could drop by at will into “a green park where people could congregate.”

An artist’s impression!.. or a bit of artistic licence?

Architectural critics were not allowed in until it opened, but when it did it was clear that “the current layout was not consistent with illustrations submitted with the original section 106 application.”  It was referred back to the City’s planning committee who, after considerable discussion, decided not to take action.

So what about the “park” and its planting as it now?

Looking down from the upper level through the planting. [Gillespies] 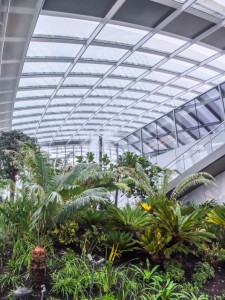 Gillespies the designers are a large and prestigious outfit with a huge portfolio of impressive schemes across the whole country and abroad and the The Sky Garden website says that they “opted for a series of richly planted terraces … dominated by drought resistant Mediterranean and South African species. Individual plants have been chosen to work in harmony with the particular quality of light found under the roof canopy. Colour and flowers flourish all year round in the Sky Garden. Amongst the flowering plants are African Lily (Agapanthus), Red Hot Poker (Kniphofia) and Bird of Paradise (Strelitzia reginae) interspersed with fragrant herbs including French Lavender and Rosemary.”

As skyscraper news commented immediately after the opening: “Unfortunately, it’s [not] a garden in the sense it was promoted, and the access that the public have been given is a far cry from what was originally promised or what was heard in the 2007 Public Inquiry.”

Indeed it isn’t. What is there now is like a vast lobby in a mid-range shopping mall, with a restaurant and bars complete with fake flowering trees, and two strips of well-intentioned but not very effective planting rising in parallel alongside a set of steps on either side of the building.   Or as the Guardian said more succinctly: “eateries and boozeries take centre stage, the vegetation being a sort of sub-tropical fuzz at the edges.”

As Skyscrapernews concludes: “What’s [after a gestation period approaching a decade] left is a nominally public space, aimed at the Gordon Geckos quaffing champagne and steaks, and a disappointing feeling of what might have been, just like the external design of the skyscraper we’re stuck with lumbering on the skyline like an oversized and unloved Quasimodo.”

I wondered if I was being unfair so I checked reviews and opinions on social media, blogs and the press…. here are just a few comments that I found.

The first comes from Peter Rees, the former City of London planning officer quoted in the Architectural Journal:  ‘It’s fantastic. I am so amazed that people keep separating out the space and the building as two different things. And you don’t have to pay! Up your’s Shard!….if it looks like an airport that’s a great comment. Airports win more prizes than any other form of architecture and our best architects have designed airports around the world….Also, this is not an alternative to a trip to Kew Gardens…. this is a place for people in the City to meet and gossip, these spaces are the places which make the City tick.” 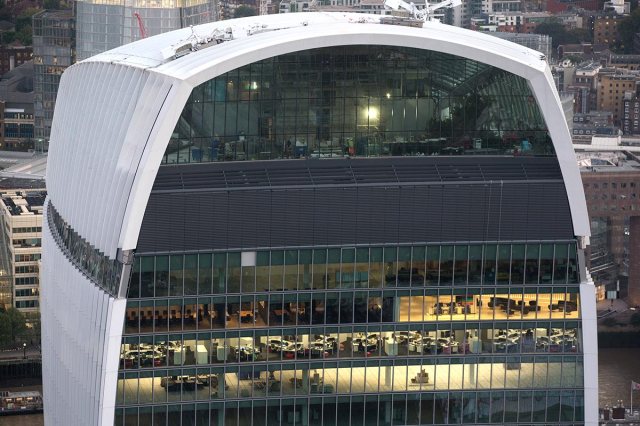 The top of the Walkie Talkie showing the sky garden photo from City A.M

That’s one way of looking at it. Others are more cynical: “A tranquil Garden of Eden in the sky this is not. At the end of the day there is probably much more money to be made from people buying cocktails than sniffing carnations.”   “The public have been misled into thinking this will be an iconic garden for London – in reality it’s more of a playground for the corporate and rich.”

Ah yes there are some other trees in here ….but they look lost too

And that sentiment echoes a real concern from many social commentators and architectural and planning critics.  That the notion of what constitutes public space is being subverted. Peter Murray, Chairman, New London Architecture again quoted in Architectural Journal : ‘The Sky Garden fits into the whole debate of what is a public space and it falls into exactly the same trap as the Garden Bridge. A public space is somewhere you can generally go on a whim, if it’s a public park you don’t expect to have to book to go in. I think there is a real fundamental issue here.’

The lower level of the atrium

The lower level of the atrium – Did I hear there was a garden here somewhere? 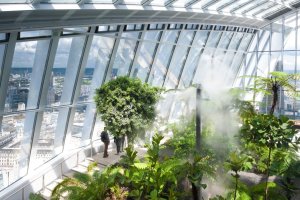 ‘All these public spaces which are privately owned are only as good as the management which goes into them. Granary Square feels like a public space even though it’s privately owned and the space at the top of One New Change is great. It’s easy to access and it is genuinely public. The public space at 20 Fenchurch Street is an exchange from the authorities in return for the developers gaining planning consent. At present it is not a fair exchange. I think 20 Fenchurch Street need to change the method of management.’

‘The developers may argue that they need to stop it becoming too busy, that they could have queues to get in or stop access if too many people are there. In New York the High Line can get so crowded you can hardly move at times, but this is in essence what public space is about.’

And sharper still was Stephen Rockman, founder of Merism Capital, speaking to City AM:  ‘It’s all part of an increasing trend of the mayor rolling over for developers. A public space mirage.’

Rockman’s view is paralleled by the way in which traditional parks run by local authorities are now so strapped for cash that all sorts of frightening backdoor privatization measures or even sales are being considered right across the country. For more on that see The Gardens Trust website, and in particular  Uncertain Prospects its evidence to the Parliamentary Select Committee.

So …go and see the Sky Garden for yourself next time you’re in London. It’s definitely worth it for the views if not the planting. But more importantly it serves as a very  sharp reminder that the meaning of public open space has been changing rapidly over the past couple of decades, and unless we do something to correct it public will no longer mean public in the traditional sense, and we will all have lost out.

And there are so many more intesresting gardens out there on London’s rooftops if not its skyline!