The Duck House in the Park of Buckland House near Faringdon, John Piper

War inspires artists,or rather requires artists, to produce propaganda, and many governments have used war artists to record a different take on what is going on to newscasts and documentary films.  Usually this is strident, but on other occasions much more gentle, but even so you wouldn’t think that war would inspire landscape or architectural painting. 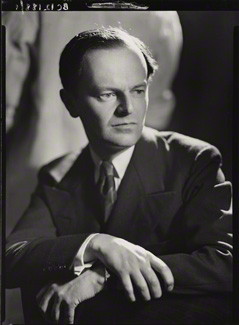 In fact there is a very significant body of work  made by artists on the home front between 1940 and 1943 organized by the Committee for the Employment of Artists in Wartime, part of the Ministry of Labour and National Service. It was the brainchild of Kenneth Clark [later Lord Clark of Civilisation fame], who was then the Director of the National Gallery, and ran alongside the official War Artists’ Scheme, which he also devised, to create an artistic record of the British landscape. 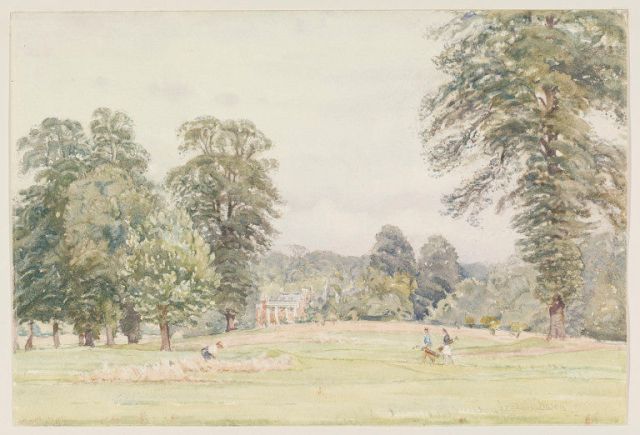 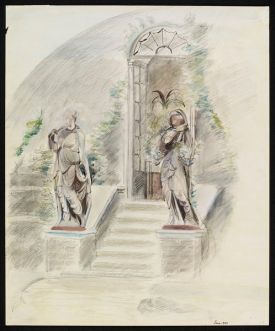 A month after the start of the Second World War in 1939 Clark wrote to an official at the Ministry:  “I need not tell you what terrible distress the war is causing among artists. The situation is so serious that I have been wondering if it would not be desirable for the Government to take some action… I have in mind something like the Federal scheme for artists carried out in America during the last five years, though ours would doubtless have to be on a less ambitious scale… it would have a wonderful effect on English art in general.”

Within a few weeks he had the go-ahead but of course no funds, so like everyone in this situation he looked for sponsors or grants and made an approach to the Pilgrim Trust. His “Scheme for the Recording of Changing Aspects of Britain” asked for £4500 to support “25 to 30 of our best landscape painters” by paying them £5 a week for 6 months.  Landscape painters obviously came fairly cheap! 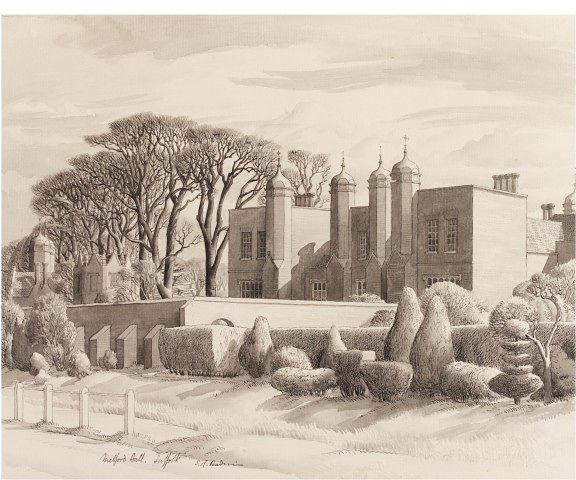 The Pilgrim Trust did what most grant awarding bodies do: they offered far less than was asked for. However their £2500 was the seed corn, and the committee chaired by Clark got to work and invited about a dozen artists to submit work. When news got out they were overwhelmed with other enquiries and got down to the serious business of assessing and then selecting artists and matching them to possible subjects. They consulted widely with groups like the Campaign for the Protection of Rural England, the Society for the Protection of Ancient Buildings and the Georgian Group. 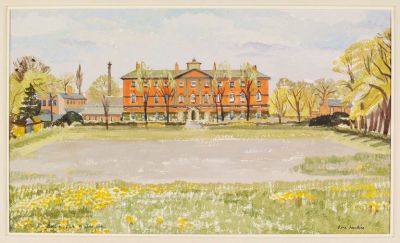 Rather surprisingly perhaps, Clark stipulated that works should be in watercolour partly perhaps because he feared for the loss of such a  traditional form of British art during the uncertain conditions of wartime, but more significantly because he argued that while photos capture ‘facts’ paintings capture ‘feeling’.

The Dashwood Mausoleum by Elliott Seabrook

But lest you think he was a Luddite and anti-photography he actually gained another grant from the Pilgrim Trust in 1941 to begin a photographic record of buildings at risk called the National Building Record. 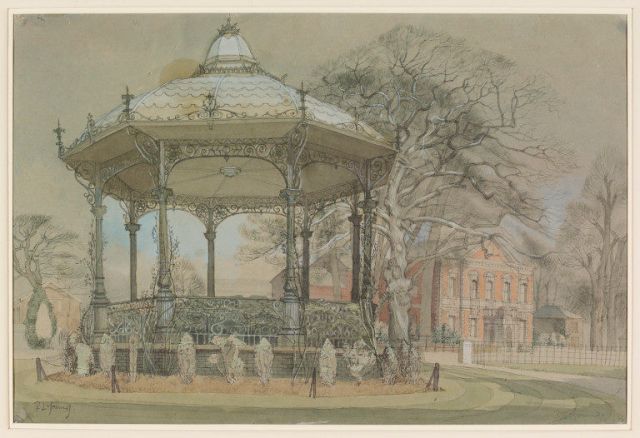 Fishbourne and the Downs from Dell Quay, Chichester by Sir William Russell Flint

Already well-established artists including William Russell Flint, Rowland Hilder and John Piper,  were amongst the 63 artists who were eventually commissioned between 1940 and 1943. But the scheme also revealed the hidden talents of a  further 34 “artists barely known or unknown” , like Richard Young and Phyllis Dimond, who ended up having work accepted.

The shelter in Bedford Square by Phyllis Dimond

Clark and the secretary to the committee, Arnold Palmer an experienced arts administrator, where prescient, looking not just at recording landscapes and buildings at  risk of damage from bombing or invasion. Suitable subjects also included landscapes and buildings that were under threat from the changes in agricultural practice needed to boost food production, those likely to be affected by the huge amount of post-war reconstruction that would be needed.

Alongside these were parish churches, often they said in a poor state of repair but otherwise unchanged for centuries and townscapes where the buildings were not necessarily of outstanding merit themselves but which together gave “a sense of the historical continuity of the English town or village.” 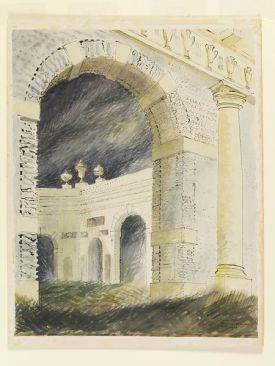 Finally they included “Country Houses and their Parks” which they thought might “be largely abandoned after the war and which will either fall into disrepair or be converted into lunatic asylums, sanatoriums etc in which case they will be largely surrounded by huts and outbuildings.”  They even gave notes to the artists suggesting their works should be “records showing the elegance and unity of country houses in their last phases, but should have sociological as well as artistic value.”

Byland Abbey, from the West, by Michael Rothenstein

In short the 93 artists had the task of painting  scenes which captured a sense of our national identity, through recording both the exceptional and the mundane parts of our landscape and heritage. Herbert Read, the critic, put it like this: they were to give us “the colour and atmosphere of a scene, the intangible genius loci… this intangible element which is so easily destroyed… Better than the wordy rhetoric of journalists or politicians , it shows exactly what we are fighting for – a green and pleasant land, a landscape whose features have been moulded in liberty, whose every winding lane and irregular building is an expression of our national character.” 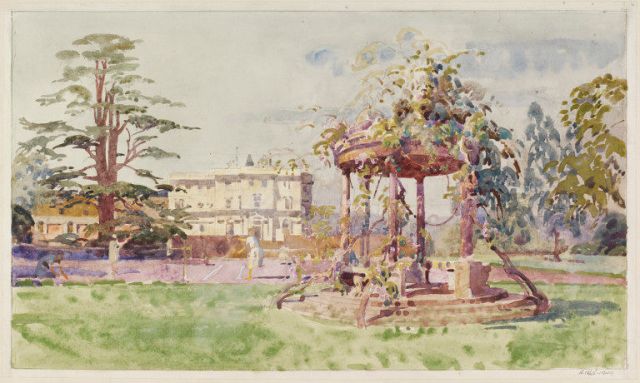 So this was art as propaganda designed to boost patriotic feelings and the national morale as were wartime poster campaigns for  ‘Dig for Victory’  and those depicting idyllic rural scenes with the rousing caption ‘Your Britain fight for it now’. 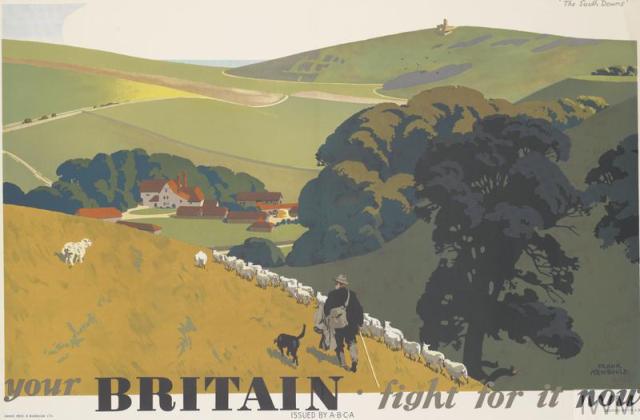 Your Britain – Fight for it Now   © Imperial War Museum

But Read went on to show that Clark had an even longer term aim: “There will be little point in saving England from the Nazis if we then deliver it to the jerry-builders and the development corporations.”  A sentiment that fits in with the longer term visions of the wartime coalition government that also led to Patrick Abercrombie’s plans for the creation of Green Belts around London and other major urban areas.

The name of the project is slightly  misleading since once again there was a conflation of “England” with “Britain”.  Not only didn’t Recording Britain not cover Northern Ireland it only included paintings from 4 counties in Wales.  There was a separate scheme in Scotland.  Recording Scotland had a similar aim: to ‘secure a record of historic scenes, site and buildings (in Scotland) which may be endangered through enemy action or by utilitarian encroachment.’ 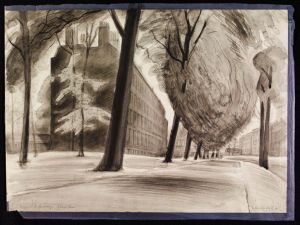 The National Gallery held 3 exhibitions during the war, and the pictures were sent on tour to galleries all around the country. After the war the paintings were given by the Pilgrim Trust to the V&A who catalogued it  and then lent out works to local museums, archives and record offices etc  for exhibition.

Then in 1990 everything was recalled by the V&A and  an exhibition held at the museum in 1992 with an accompanying book entitled Recording Britain: A Pictorial Domesday of Pre-War Britain. 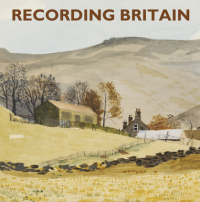 So Why isn’t the art of Recording Britain better known?   Gill Saunders  a senior curator at the V&A in  her new book Recording Britain, says that the critical consensus was the collection was ‘characterized by monotonous mediocrity’.  By chance when the pictures were recalled by the V&A in 1990  she was given the task of filing them away.

Having looked  at the first tranche  she agreed: they were  ‘muddy or washed-out, second rate, and in their brittle yellowing card mounts, they gave off an air of neglect.’  With only a few exceptions they were also rather conservative in style. But later as more and more of the work was returned she had  some ‘thrilling revelations’ and finally she wrote a book about the collection!

These 1549 pictures are a unique rich visual record of national and regional identity which together portray an idealized account of the country at war.  But they don’t focus on destruction or bombing, indeed they don’t show anything militaristic. Instead  they take us off the beaten track of iconic British landmarks and postcard images and portray cherished landscapes and architecture as war was threatening old certainties and securities.  Importantly too, as Gillian Saunders says : ‘What is apparent now is how the collection is greater than the sum of its parts – a fascinating snapshot of values and concerns of that moment.”

You can see all the paintings in the Recording Britain collection at the V&A website. 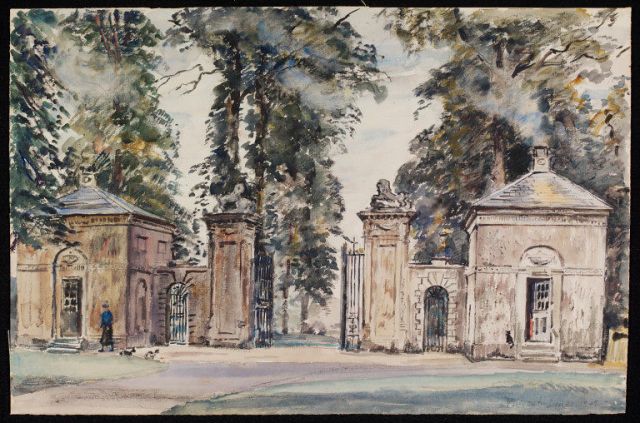 Email - education@thegardenstrust.org Website - www.thegardenstrust.org
View all posts by The Gardens Trust →
This entry was posted in Uncategorized and tagged john Piper, Kenneth Clark. Bookmark the permalink.