The wonderfully named Batty Langley was a gardener’s son who followed in his fathers footsteps and then turned surveyor, landscape gardener, artificial stone maker, would-be architect and garden designer, as well as prolific author.  Well  he had to do something to earn money to feed his wife and 14 children!  Batty was a man of many talents and trades but probably master of none.

Although often ridiculed, even during his lifetime, Langley is a significant figure because he was  one of the earliest writers to promote and popularise both  the Gothic style of architecture and   the “irregular”  garden, that halfway stage between the formal geometric gardens of the baroque and the later more naturalistic landscape movement. He first summed up his ideas in his New Principles of Gardening in 1728.

I’m sure the first question people have about Langley is why does he have such an unusual name? The answer is simple. His father, Daniel, was trying to impress a patron of his, so when his son was born in September 1696 he was named after David Batty while his sister was later named Judith after David’s wife.

Daniel was a professional gardener in fashionable Twickenham, and he surely would have known, if only through his wealthy clients about the changes in aesthetic principles  which were taking place in the early decades of the new century. Poets, philosophers, artists and writers were questioning long-held assumptions about the relationship between art and nature, and these ideas were beginning to be reflected  in practical horticulture and garden design. 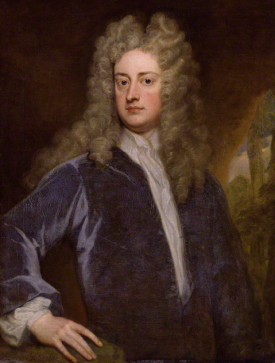 When Batty was 16,  Joseph Addison published his famous article in the  The Spectator (No 414, 25 June, 1712), where he “observed, that there is generally in nature something more grand and august, than what we meet with in the curiosities of art. When, therefore, we see this imitated in any measure, it gives us a nobler and more exalted kind of pleasure than what we receive from the nicer and more accurate productions of art.” 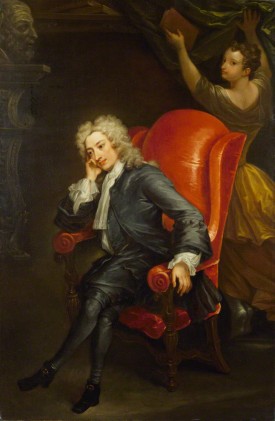 The following year Alexander Pope, a fellow Twickenhamite, wrote an essay for  The Guardian (No 173, September 29, 1713), recalling the  paradisiacal  gardens of the classical world  – the locus amoenus – described by Vergil (Georgics 4.125-48) and Homer ( Odyssey 7.112-32). In it he argued that their simplicity and  harmony with nature  should be a model for garden and landscape design rather than “the modern practice of gardening”  where “we… recede from nature, not only in the various tonsure of greens into the most regular and formal shapes, but even in monstrous attempts beyond the reach of the art itself. We run into sculpture, and are yet better pleased to have our trees in the most awkward figures of men and animals, than in the most regular of their own.”

Such views were to have a long term impact on Langley and his approach to gardens. 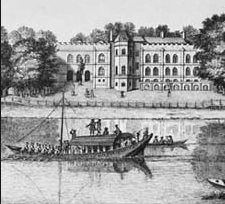 In 1719 Batty married and started a family with his wife Anne. By then he had followed in his father’s footsteps, and had  a garden next to Radnor House in Twickenham.   However his main local client was probably Thomas Vernon, of Twickenham Park.   There he laid out a wilderness and converted a large sandpit ‘then a perfect nuisance’ into a ‘very agreeable beautiful’ spiral garden perhaps a 100 feet in diameter with hornbeam hedges.

Entrances to Grottos from Practical geometry

By 1724 he had started to write. His first book was An Accurate Description of Newgate probably because his younger brother, worked there as a turnkey. However, by 1726 he had started to turn his attention to gardening  publishing a handful of  designs for irregular gardens in Practical Geometry.

But 1726 was a difficult year for him as his major client, Thomas Vernon died,  and so did his wife Anne leaving him with 4 children. Perhaps it was those events that drove him to write more and garden less, with  6 more books in the following four years.

The Builder’s Chest-Book; or, a Complete key to the five orders of columns in architecture, which came out in 1727 was the first of a long series of bread-and-butter information manuals aimed at artisans, especially those London’s burgeoning construction industry about basic architectural principles. 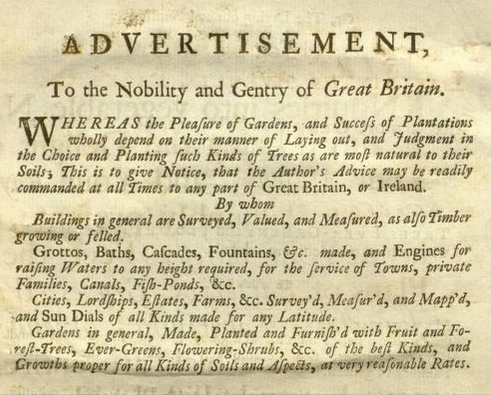 the recto of the title page

It was followed in 1728 by New Principles of Gardening.  Dedicated to the new King, George II,  the first page is an advertisement for Langley’s own professional services.

The introduction that follows is something of a tirade, debunking all previous writers who had given the impression that England’s gardens were the best in the world when, according to Langley they were in fact, in most respects, the worst!

And of course who better to outline the Principles underlying  the required “grand and elegant Taste in Designing” than none other than a certain Mr Batty Langley. Admitting that there had been other great gardening books – the best of which were John James Theory and Practice of Gardening, and those of Stephen Switzer,  he adds “even those are far short of that great Beauty which Gardens ought to consist  of.”

The introduction contains a summary of his garden design principles, which are rather a series of strident injunctions. Langley begins by arguing that ” the pleasure of a garden depends on the variety of its parts.” And  warning the owner not to overcrowd their garden with evergreens or it will resemble a nursery rather than a garden of pleasure.

This was accompanied by  a plea to copy nature, so that when planting groves ” you must observe a regular irregularity; not planting them according to the common method like an orchard, with their trees in straight lines ranging every way, but in a rural manner, as if they had receiv’d their situation from nature itself.”

Further “there is nothing more agreeable in a garden than good Shade and without it a garden is nothing.” Bad luck for the new king then because Batty goes straight on to decry Hampton Court, “where the fine Terrace Walk from the parterre to the Bowling Green next the Thames , being naked of shade is thereby useless.” Ditto Richmond.

He is also concerned that vistas and views should be as open and unrestricted as possible, and is an early proponent of what he calls the ha-ha. Rather than a long ditch/sunken wall to keep out animals, Langley’s is a short water filled one, as can be seen from the detail below. However it serves the same purpose – to keep an unobstructed prospected while not allowing easy access. 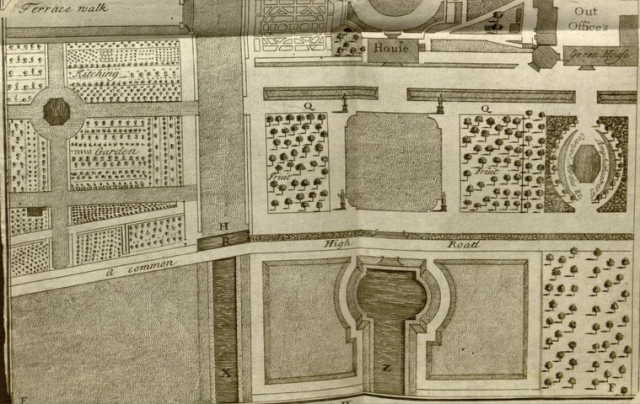 detail from a design for Orleans Park

“At R, there is a Ha, Ha, of water, which is a fence to the garden from the road, and admits of a nicer view, which iron gates or grills cannot do.”

The plate accompanying the chapters on maths for gardeners

But all this good taste starts in an unusal place: Geometry!  The first chapter consists of a series of mathematical exercises on such things as dividing angles, drawing parallel lines, measuring lines proportionately and ending with “how to describe with compasses etc any rural or irregular Curved line.”

More exercises follow on area and polygons before Langley concludes “having now exemplified all the most useful definitions and problems absolutely necessary to be well understood by every good gardener, I shall in the next part lay down the true management and ordering of Fruit and Forest-Trees, Evergreen and flowering shrubs…”  As far as I can tell, although lengthy, they do not include anything particularly new or innovative.

Next comes most of the book’s 28 plates, including several fold-out ones. They show some rather far-fetched designs, full of wiggly, meandering and serpentine paths. Of course in itself this irregularity was not a new idea either.  Stephen Switzer had already argued  “if a little regularity is allow’d near the main building,  [the owner] ought to pursue nature afterwards, and by as many twinings and windings as his villa will allow … diversify his views, always striving that they may be so intermixt, as not to be all discover’d at once; but that there should be as much as possible, something appearing new and diverting, while the work should correspond together by the mazie error of its natural avenues and meanders.”  [Ichnographia Rustica, 1718]

Calling this style the “arti-natural”  Langley wrote  ‘Nor is there any Thing more shocking than a stiff regular Garden; where after we have seen one quarter thereof, the very same is repeated in all the remaining Parts, so that we are tired, instead of being further entertain’d with something new as expected.’

You certainly couldn’t say that about most of the designs he published which even included irregular improvements for the maze at Versailles.

Park designs after a more Grand Manner than before

from New Principles of Gardening,

Architectural historian Eileen Harris argues that “in his designs for serpentines inventiveness runs rampant. He ‘confounds, surprises, varies, and conceals the bounds’ beyond Pope’s wildest dreams. His writhing walks – guaranteed to prevent the visitor from ever knowing where he is or whether he has been there before – are the ultimate panacea for the boredom and expense of long straight avenues and rigid, radiating arms. Not only are they infinitely more entertaining, they also have the advantage, economic and visual, of making small gardens appear large and large ones grand and noble. Although designed by art and geometry to imitate nature, they are every bit as un-natural as knotted parterres, and are, indeed, similarly disposed in axial compositions.” [Burlington Magazine, May 1977]

She thinks Langley’s art-natural approach  “prefigure Hogarth’s ‘line of beauty’… [and] signalled the emergence of the rococo style in England.”

After the garden designs  New Principles includes a few plates of  gardens  “after the Grand Manner of Versailles” which remind me of John Bowles  collection of prints in Versailles illustrated .

There are also a few plates of  classical Roman-like ruins which, according to Eileen Harris, are probably copies of engravings  of ruinscapes by Joachim von Sandrart. 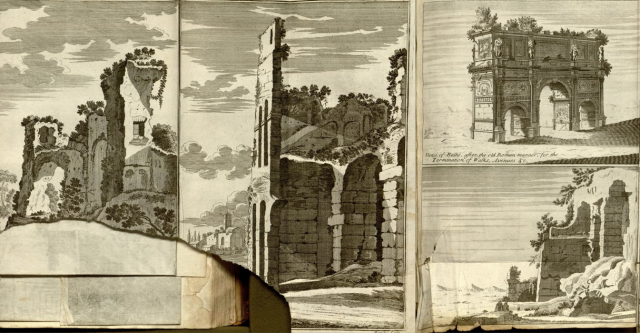 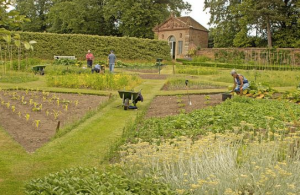 The New Principles concludes with a long section on Kitchen gardens. Again the text contains nothing new but is illustrated by some basic, if not very inspiring designs, which are all quite traditional and show no signs of being ‘arti-natural’ in any way, despite being described as in “a new and grand manner”.  One of them was  used in the late 1990s as  the inspiration for a reconstruction of the kitchen garden at Castle Bromwich Hall

Many of the plates were drawn and engraved by his brother Thomas Langley with whom he shared a house and was to work throughout his life.

Although New Principles was probably Batty Langley’s biggest contribution to gardening  it was not his only one, as we will discover next week…