Sketch for a vase  for the pedestals of the gate piers, Oxford Lodge, Basildon Park, RIBA

The wonderfully named John Buonarrotti Papworth, was an architect , interior and garden designer and a near contemporary of John Claudius Loudon, Humphry Repton and Frederick Crace.  You may not have heard of him, or if you had, maybe like me you hadn’t realised how ubiquitous and influential he was. He spans the difference  in taste and fashion between the late Georgian and the  early Victorian periods  and  I hope this post will help raise awareness of his importance. 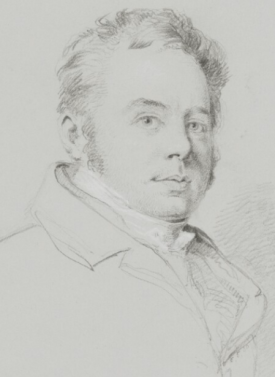 Papworth’s clients were, like Repton’s largely “new” men – bankers, industrialists, and businessmen— who wanted designs for  their estates, villas, and business premises. He was successful,  able to combine architecture with  internal furnishing and decorations and crucially, as far as we are concerned,   gardens. 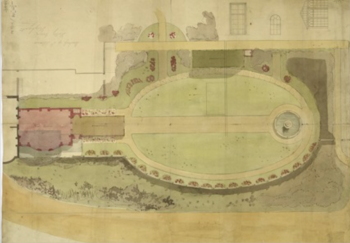 Design for a new room, conservatory and  the layout of the garden, Holly Grove (later Holly Lodge), Highgate, London, 1825, RIBA

Born in London in 1775 John Papworth’s father, also John,  described himself as an “architect, plasterer and builder”. He  was actually the leading figure in decorative plasterwork in the country, employing more than 500 men. Amongst his clients was  Sir William Chambers, the royal and government architect for whom he worked at Kew, Greenwich, Buckingham House and Somerset House.  It was Chambers who recommended that John junior, one of 12 children, should follow an architectural career.

John junior got work experience  in the studio of architect John Plaw, but also studied with artist Thomas Malton, sculptor John Deare,  builder Thomas Wapshott, and  at Sherringham’s the society upholsterer,   before going to the Royal Academy Schools in 1798. It was an unusual and wide-ranging ‘apprenticeship’ in all aspects of design.

The upshot of all this variety was that John  turned his hand to designing everything from housing estates to conservatories, shopfronts to curtains, the first gin palace to tombstones and even the fittings for a paddle steamer.  His work became known particularly through his contributions to Rudolph Ackermann’s Repository of Arts (1809–28). He was also a practicing artist, helping form  the Associated Artists in Watercolours in 1807).

When I first started researching Papworth one of the obvious questions was why on earth is he called Buonarotti?  The reason isn’t immediately apparent – ie it’s not a traditional family name being handed down or a reflection of Italian heritage but something which suggests that either he had an inflated ego or a very particular sense of humour…..

Sketch plan of the layout of the grounds Brampton Park, Huntingdonshire, 1820, RIBA

It’s because he designed a tropheum to commemorate the victory at Waterloo  and his friends  were kind – or sarcastic? – enough to flatter him and call him a second Michelangelo. So John took the unusual – or perhaps rather pretentious – step of adopting the painter’s family name of Buonarotti. But of course Pride comes before a fall of course and his tropheum scheme was  rejected by the Royal Academy.

Papworth later helped set up the Graphic Society in 1833 and was  involved with the formation of the Institute of British Architects in 1834, becoming its vice-president eight times, and leaving them his archives. From 1836 -1838 he was also  director of the short-lived Government School of Design. So, as you might expect he also wrote quite a lot too, covering everything from dry rot to the theory of rural improvement, by way of ornamental gardening and historical sketches of public buildings.

Like Repton, Papworth catered less for  the elite than the  aspirational classes: especially the nouveau riche.  Historic England’s register has 53 links to Papworth and there are more than a dozen sites with links to him on our database. So while I started out thinking he’d be a nice ’rounded’ single post, I soon decided that he probably merited a second  to do him justice.

Papworth was lucky in his first real job. This  was the supervision of substantial alterations to Woodford Bridge Lodge in Essex in 1797  for  Sir James Wright, former ambassador to Venice. Although he was in theory only ‘clerk of the works’ for  architect Philip Norris, he actually took complete charge of the work.  Sir James obviously liked Papworth, recommending him to friends and so launched his career. 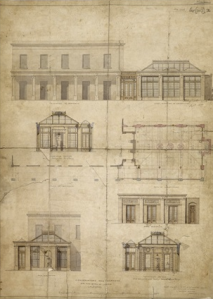 Papworth’s  first major independent commission was Laleham Park, a neo-classical style mansion for the 2nd Earl of Lucan between 1803-1806. This began a long term collaboration and he was called back in 1827-30 to make alterations. Around the same time he also carried major works at the earl’s Irish estate of Castlebar. In 1839 the 3rd earl called him back for more more work including new stables and farm buildings.

Laleham was finally sold by the 5th Earl in 1928, and after a period as a nunnery – when its name was changed to Laleham Abbey – it was converted into apartments so you still have the chance to live in a Papworth building.

Design for a rustic summerhouse with curved front and set in a corner: sketch plan and elevation, Leigham Court, RIBA

But its around 1820 when when his career takes off. First, and I have no idea how or why, he was asked to design a palace and its gardens  for Wilhelm I, king of Wurttemberg.  Although the buildings weren’t ever constructed parts of his ideas for the gardens were, and as a reward Wilhelm granted him the title: ‘Architect to the King of Wurtemberg’ which I suppose was a suitably snobbish accompaniment to his Michelangelo associations.

But as I said it wasn’t royalty who were his main clients, but  newly rich  professionals and businessmen, particularly those within easy reach of London. Papworth was called in, for example,  to design a large suburban villa, Leigham Court in Streatham in 1822. This was  originally planned to be a country version of Boodles Club, then the gentleman’s club but John Fuller who owned the club decided to live there himself. Evidently it was not grand enough and within a decade Fuller had Papworth build a second, and more magnificent, mansion alongside the original building which became the service wing.

One-quarter plan of the pond in  the walled garden with details of  its ornamentation,Leigham Court, Streatham, London: RIBA

The two mansions  stood in 66 acres of parkland  with pleasure grounds, a lake and a tower with panoramic views.  Large parts of the gardens and several garden buildings were designed by Papworth very much in Reptonian style. 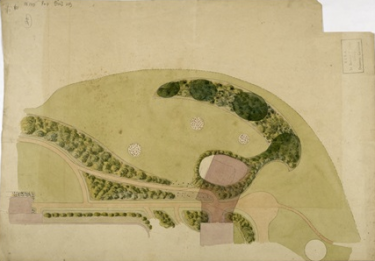 Designs for Leigham Court, Streatham, London: layout of part of the grounds, RIBA

In 1889 the estate was bought by the Artisans’ Labourers & General Dwelling Company, both buildings demolished, and the site redeveloped with about 2,000 houses! 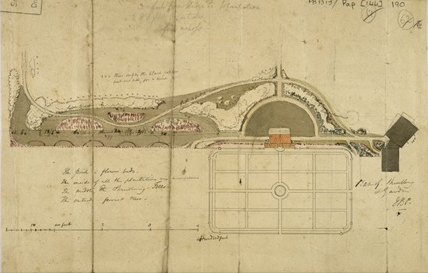 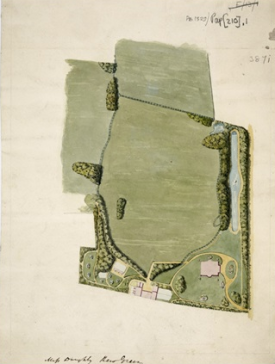 Site plan of the house and its grounds, Kew Priory (otherwise The Priory), Richmond upon Thames, London, 1820, RIBA

The RIBA collection contains several other suburban building and gardens schemes. One was for  Kew Priory “the summer retreat of a wealthy Catholic maiden lady, Miss Doughty”.  She must have liked Papworth because a visitor reported it was apparently “a rule  of the place that no man could be admitted besides …the Catholic priest.”

And just along the river was Twickenham Park where Papworth built an elegant conservatory for  businessman Thomas Todd. 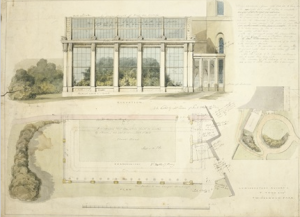 In North London, amongst other things, there was a small scale garden plan for landowner and businessman Richard Taylor in Harlesden, and then alterations and a grand conservatory on a country villa in Crouch End for gin distiller John Gillyatt Booth.

Designs for a pavilion added to a country house, Crouch End, London,1827  RIBA 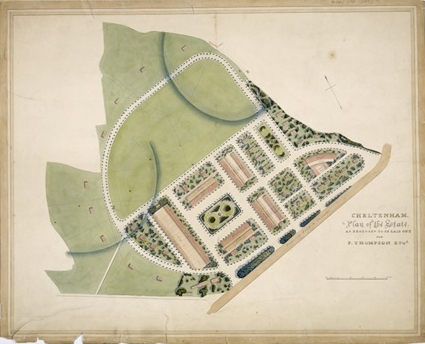 Probably more importantly throughout  the 1820s Papworth was also designing individual houses in and around the booming spa town of Cheltenham and  preparing for his largest scale scheme of all, the planning of a  middle-class ‘garden suburb’ estate there for the Thompson family. Although not on the same scale as Bath this was still a remarkable piece of town planning.

The Lansdowne estate was in effect the first planned garden suburb in the country. Begun in 1825 a collapse in the building boom led the owner Pearson Thompson to sell, and unfortunately the new owners not only sacked Papworth without payment but substantially revised his plan so that only a small fraction was built as he had intended.

His two Cheltenham churches with their pioneering use of cast-iron columns, have been demolished but his architectural legacy there will live on  becasue of the iconic Montpellier pump room. The original building had been built by someone else  in 1817 but was, according to the updated version of Pevsner  “too low to be impressive”  and very soon Thompson turned to  Papworth for ideas, since the building was too new to be pulled down. His solution was to top the existing building with a dome based on that of the Pantheon in Rome. It was  “a masterpiece, providing Roman opulence and a great feeling of spaciousness”, and of course he also designed the surrounding gardens.

Another major client was James Morrison, an extremely wealthy  self-made businessman, art collector and Liberal MP.  Papworth designed shop premises for him in London, and was called in when Morrison bought Fonthill Abbey, William Beckford’s former Wiltshire estate, in 1829. He added new gates and lodges and carried out major alterations to The Pavilion, the service wing, the only habitable part of Fonthill after the tower’s collapse in 1825. Work began in 1832 and lasted for ten years.

Designs for a landing stage on the lake, The Pavilion, Fonthill, Fonthill Gifford, 1830,  RIBA

But Morrison soon fell out of love with Fonthill and no sooner was it finished than in 1838 purchased another grand mansion much closer to London: Basildon Park.

Basildon Park had been designed some 60 years earlier by John Carr of York but the  interiors had  never been completed.  Morrison, commissioned Papworth to design and complete the interiors in suitably classical styles, as well as design or modify estate buildings to create what Morrison described as “a casket for my pictorial gems.”

Papworth also designed the gardens taking  parkland right up to the house on one side and laying out ornamental grounds on the other.  His work was probably altered later with advice from William Andrews Nesfield and Edward Kemp. Papworth also built an orangery in the walled garden [designed by Capability Brown at the same time Carr was building the house].This is also listed Grade 2 but has now been converted into a house.

Another Liberal politician, Alexander Murray, also became a major patron, commissioning Papworth to carry out major alterations to his Scottish seat, Cally House.  But Murray had a London home too: Orleans House at Twickenham. Originally designed by John James  in the first half of the 18th century, James Gibbs later added the Octagonal Room. Papworth carried out modifications and added a conservatory. Unfortunately the whole property was demolished [apart from the Gibbs Octagon] in 1926 to allow for gravel extraction!  But we have Papworth to thank for a ground plan of the estate in the 1840s. 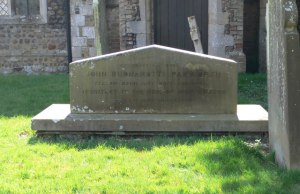 John Papworth retired afer he was  taken ill in 1846. He moved to Little Paxton, near St Neots, Huntingdonshire, but died and was buried  there the following year. As you can see his grave shows no great similarity with any of his own  designs. He may not have been an English Michaelangelo – or if he was – only of the suburbs – but his legacy was not insignificant and was also boosted by several influential books of design which I hope to look at one day soon.