The Picturesque Traveller discovers the Lakes 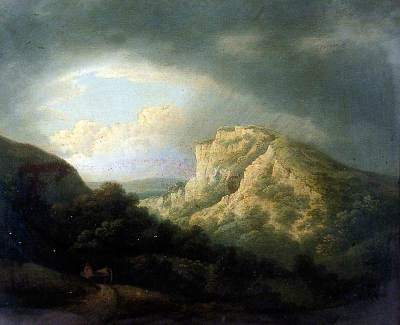 Last week’s post about Anthony Devis showed how our understanding and appreciation of the landscape has changed radically over the centuries.  Until the beginning of the 18thc wilderness and untamed nature, was generally unappreciated with most art, literature and aesthetic taste focused on the tranquillity of pastoral scenes.  However philosophers like the Earl of Shaftesbury then began to take more interest in wild nature. 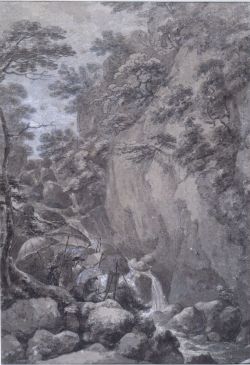 This developed as the century progressed and saw the emergence  of a new aesthetic category which explained how wild and untamed  scenery could evoke a response which was not the displeasure associated with ugliness, but pleasure mixed with fear.

Previously unregarded parts of the country  such as the Lake District, the Peak District, Wales and Scotland began to attract visitors. As transport and roads improved so more and more travellers  toured the country  seeking “picturesque beauty” and “the sense of the sublime” in nature.

Who for instance, would previously have thought that Windermere, looking like an outpost of  the North Atlantic coast in a force 9 gale, would be a suitable subject for a painting? 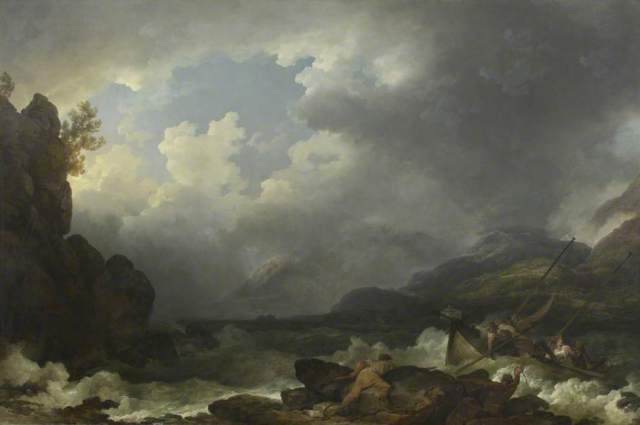 Once the idea of tourism began to spread through the elite and the wealthy professional leisured classes so there was a demand for travel accounts and guide books as well as topographical prints and drawings of gardens and landscapes that would serve as souvenirs. 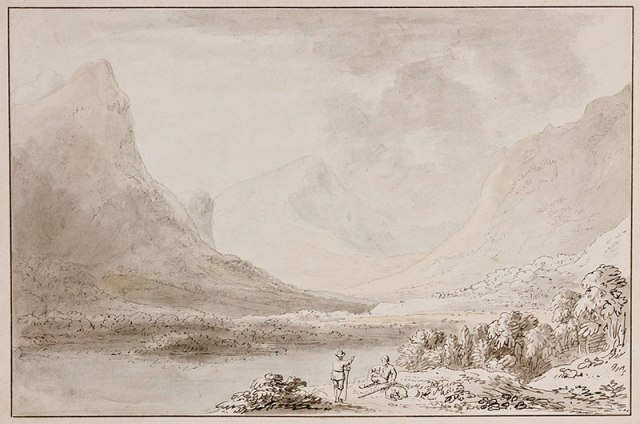 The first person to publish an account of their travels in the Lake District was  Celia Fiennes  in 1698, with Daniel Defoe’s Tour Through the Whole Island of Great Britain following  in 1724-7 (1724-27). Celia was not terribly interested in the landscape except when it had utility, such as  the  hills around Kendal which had lanes which led  to “rich good… inclosed lands” or the good hunting grounds of the forests and parks around Ullswater area.  But even she was moved by the dramatic  dark nature of the landscape near Windermere, and  foreshadowed the sublime: “as I walked down at this place I was walled on both sides by those inaccessible high rocky barren hills which hangs over ones head in some places and appear very terrible.” 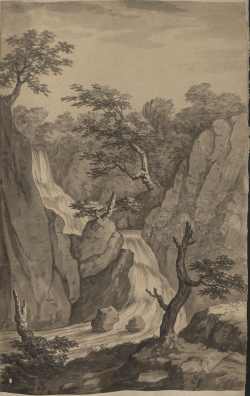 A poem of 1755 by Dr John Dalton, is probably the earliest literary description of the Lakes. In it he writes of  “dread Lodore”, the waterfall at the southern end of Derwentwater, cascading through its fierce “rough rocks”:

But soon with savage grandeur charm,

And raise to noblest thoughts the mind. 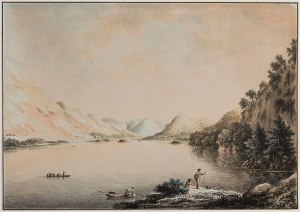 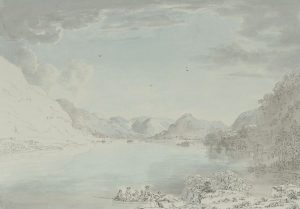 By the 1760s the landscape of the Lakes was being viewed as something awesome and terrible.  Dr John Brown writing in 1766 described the mountains there as: ‘…of stupendous height, hanging over the lake in horrible grandeur, some of them a thousand feet high, the woods climbing up their steep and shaggy sides, where mortal foot never yet approached. On these dreadful heights the eagles build their nests; a variety of waterfalls are seen pouring from their summits, and tumbling in vast sheets from rock to rock in rude and terrible magnificence: while on all sides of this immense amphitheatre the loft mountains rise round, piercing the clouds in shapes as spiry and fantastic…’ 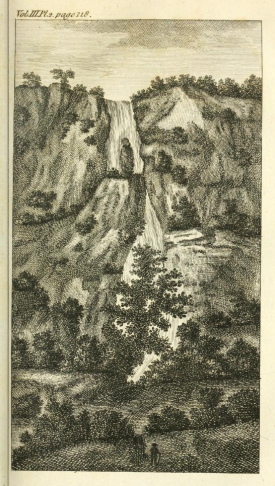 It was the beginning of a flood of writers publishing their accounts of its scenery.  Agricultural commentator Arthur Young’s A Six Months’ Tour Through the North of England, described the landscape in a long series of footnotes which, as can be seen from the example below, used the soon-to-be-familar language of the sublime and the picturesque which is best known through the essays and travel accounts of William Gilpin. 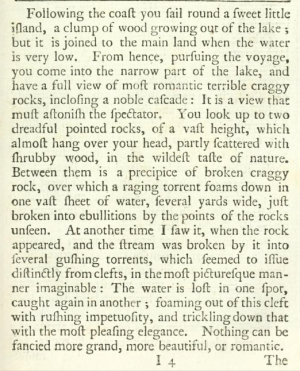 Rev William Gilpin was a cleric and schoolmaster, who, perhaps because of his Cumbrian origins developed an appreciation of wild and rugged mountain scenery. 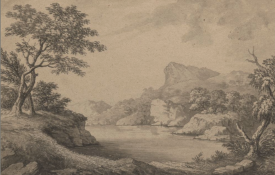 View of a lake with mountains beyond, John Bernard Gilpin,
1760, Wordsworth Trust

It would have helped too that His father, Captain John Bernard Gilpin was an amateur landscape artist, although most of his work is somewhat gentler in style, with fewer rough edges. 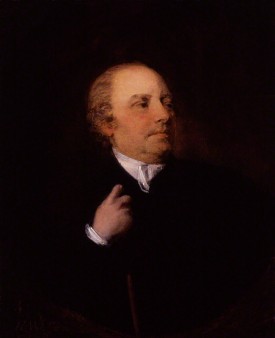 William Gilpin began to formulate aesthetic theories  which were  divorced from other qualities  such as morality or utility of the object viewed. His thoughts were published as Essay on Prints in 1768 where,  in the famous phrase ‘”that kind of beauty which is agreeable in a picture”,  he defined the picturesque, before going to lay down the “principles of picturesque beauty”. 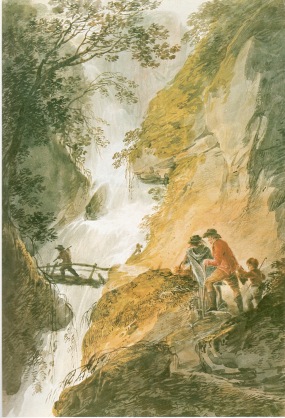 The picturesque has, he said,  “that kind of beauty which is agreeable in a picture”, with picturesque foregrounds,  soft foliage framing the view and a few quaint rustics watching their cows by the shore.  But all these elements are set against lowering mountains, perilous rocks or thunderous waterfalls and – if you were lucky – a terrifying storm to  evoke terror and awe in the eye of the beholder without actually being that dangerous to the onlooker themselves.

Because he ran his own school Gilpin had long  summer breaks,  and during these he travelled extensively the length and breadth of Britain jotting down his observations and sketching the landscape. 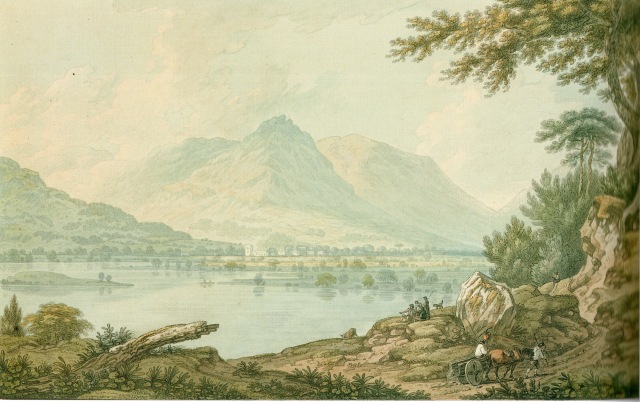 His accounts circulated in manuscript amongst his friends, who eventually persuaded him to publish them. The first, in 1782, was his  Observations on the River Wye, and several parts of South Wales, etc. relative chiefly to picturesque beauty; made in the summer of the year 1770 but it was soon followed by his Observations…. of Cumberland, and Westmoreland in 1786. More volumes using the same model followed – the Highlands, the New Forest, the West Country, the South Coast, East Anglia and North Wales. 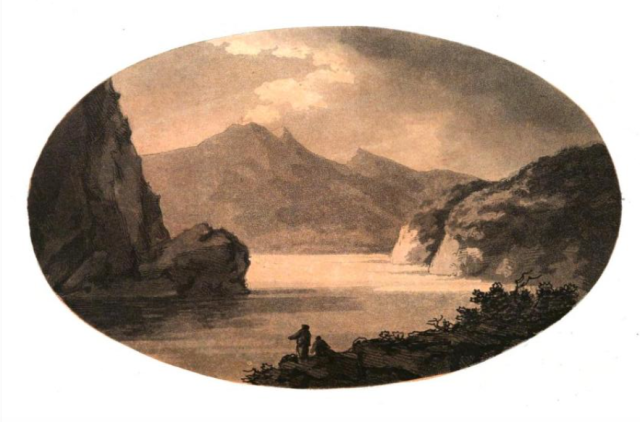 from Observations, Relative Chiefly to Picturesque Beauty, Made in the Year 1772 On Several Parts of England; Particularly the Mountains, and Lakes of Cumberland, and Westmoreland,              William Gilpin 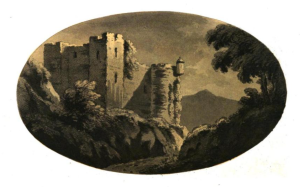 However in Gilpin’s view ‘Nature, for all her beauties, was unequal in composition’ and had to be corrected by someone of taste ie Gilpin himself.  As a result his paintings cannot be taken as accurate depictions of the topography of a place, since of he was quite capable of excising ‘ugly’ things from his views, rearranging the elements of the landscape to produce a picturesque arrangement. A similar pattern can be seen in his topographical writing where places that fitted his sense of aesthetics were written about at length while those he did not consider worthy were dismissed quickly or overlooked entirely. 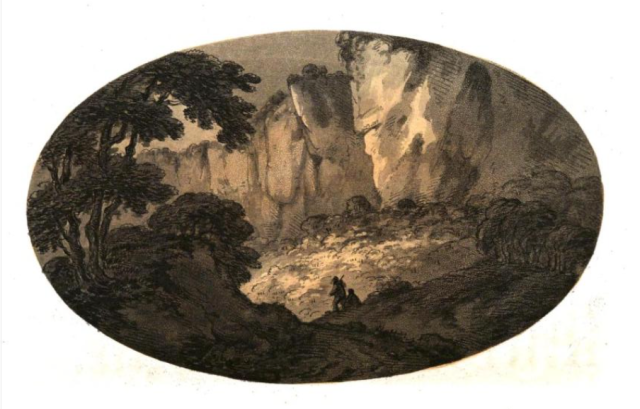 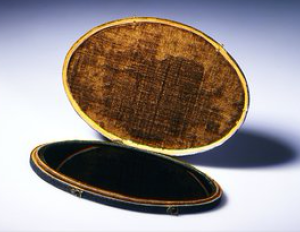 To compose his pictures, and provide the right tonal qualities Gilpin used a Claude Glass.  This was simply a mirror with a tinted convex glass  but “Where the objects are great and near, it removes them to a due distance, and shews them in the soft colours of nature, and in the most regular perspective the eye can perceive, or science demonstrate”.  In other words its  convex lens “pulled” the landscape into a neatly confined view, while the usually sepia tinting helped the user to see the relative tonal values. 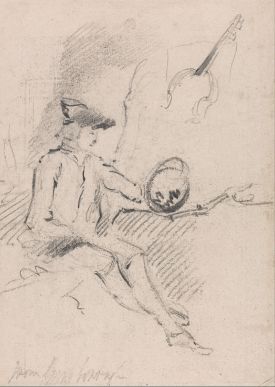 Its use was strongly recommended by Thomas West the author of the first guide book to the Lakes published in 1776.  He explained that ‘The mirror is of greatest use in sunshine; and the person using it ought always to turn his back to the object he views. It should be suspended by the upper part of the case, holding it a little to the right or left (as the position of the parts to be viewed require) and the face screened from the sun. A glass of four inches, or four inches and a half diameter, is a proper size’. 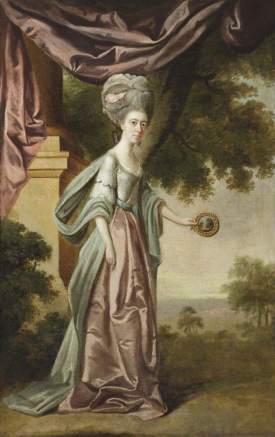 One wonders if the Claude glass was mainly used by amateurs or if professional artists ever used such a device. 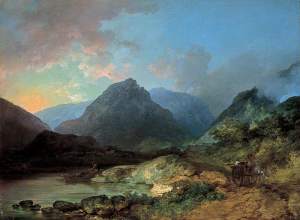 Thomas West’s A Guide to the Lakes was “dedicated to the lovers of landscape studies, and to all who have visited, or intend to visit, the lakes in Cumberland, Westmorland, and Lancashire”  It is  pretty comprehensive  and interestingly it uses comments from  earlier writers to ‘encourage the taste of visiting the lakes’.   Amongst them was William Hutchinson’s Excursion to the Lakes  published in 1774 which showed there were already increasing numbers of visitors and gives some idea of what they were seeking… 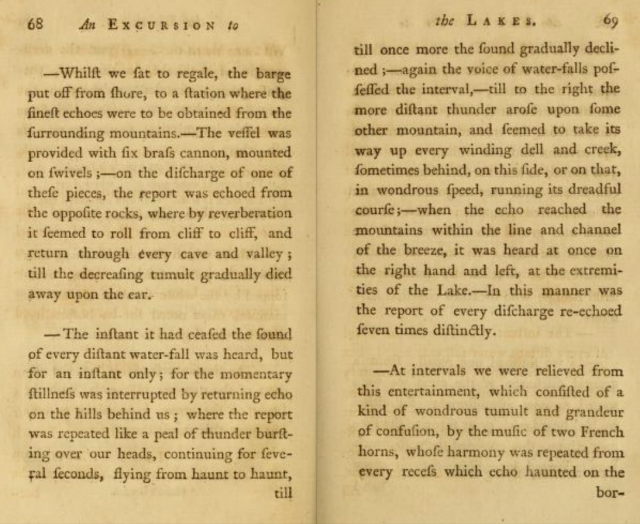 An excursion to the lakes in Westmoreland and Cumberland, August, 1773
by William Hutchinson, 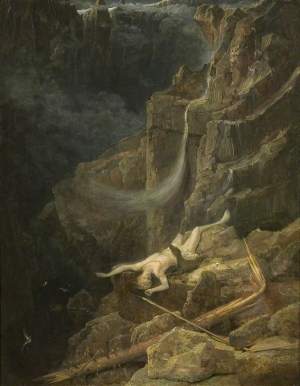 The travel journal of the poet Thomas Gray appeared in 1775. Gray made suggestions for an itinerary with appropriate stopping points along the way, and he picked up on the language of the sublime. Borrowdale, for example, was made to sound perilous enough to give the reader a frisson of danger: It was like an Alpine pass, “strewed with piles of fragments strangely thrown across each other, and of a dreadful bulk”.  Elsewhere the scenery was a “turbulent chaos of mountain behind mountain, rolled in confusion”. All a bit scary – but unlike Danby’s The Precipice – not quite scary enough to put the visitor off – indeed as Gilpin said they came to be “pleasurably frightened.” And  West   even added practical information and  “directions to every rocky torrent and cloud-crowned peak”. 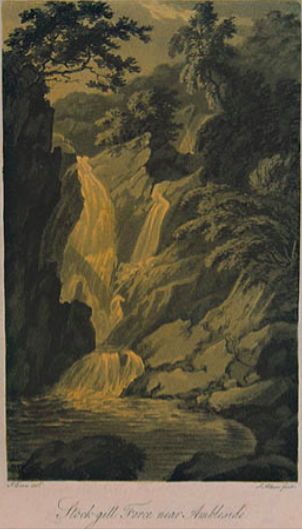 Stock-gill Force near Ambleside, 1794, Published as a set of sixteen aquatints drawn by John ‘Warwick’ Smith and John Emes entitled, ‘Views of the Lakes.’ Wordsworth Trust.

This fascination with sensations of fear and trepidation, surprise and wonder can be seen in Pride and Prejudice. Elizabeth Bennett is invited to accompany her aunt and uncle on “a tour of pleasure” which might “carry us.. to the Lakes” and she responds rapturously: “what are men to rocks and mountains? What hours of transport we shall spend.” She also exclaims that she does not want to be like other travellers who return “without being able to give one accurate idea of anything.” Imagine her disappointment then when shortly afterwards she is told that they “were to go no further north than Derbyshire.”  The Lakes had replaced the Peak District as the must-go destination, because  the moors and caverns of previously fashionable Derbyshire, were no longer seen as remote, wild or exciting enough… no wonder Miss Bennett was heartbroken at not being able to go and hear the cannon-fire echoing round the hillside. [And if you wonder what that means you didn’t read the extract from Hutchinson a few pictures back!] 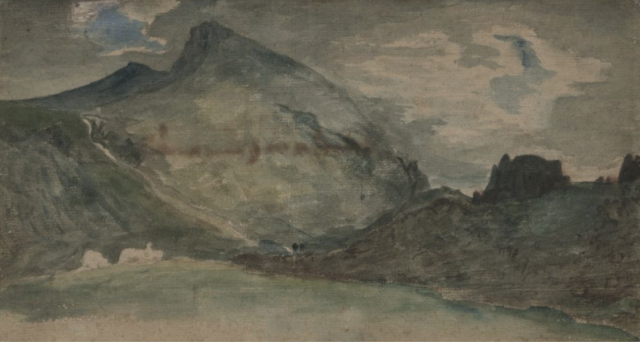 And of course the wars with France made the Grand Tour, which had been a rite of passage for many young gentlemen, more difficult and then eventually impossible. So, suddenly  the majority had little choice if they wanted to get away from home and complete their education  but to explore the landscapes of Britain instead.  And to help them West’s guidebook included information to “relieve the traveller from the burthen of those tedious enquiries on the road, or at the inns, which generally embarrass, and often mislead” 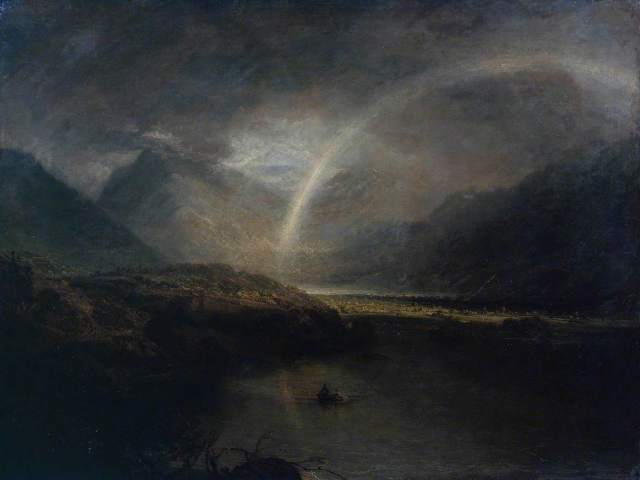 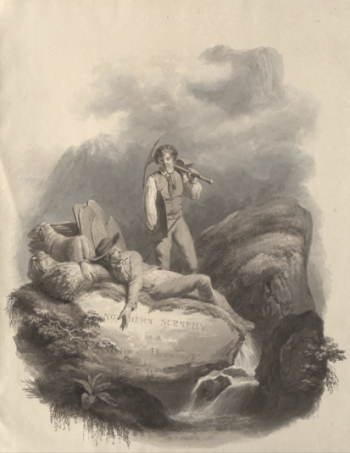 Just as these gentlemen had collected paintings on the Grand Tour as souvenirs so artists began to flock to the Lakes to paint  sublime and picturesque ‘souvenirs’ amongst them Constable and Turner who was the first to use vivid colour and light to capture the drama of Lakeland scenery, and make it almost ‘Alpine’ in its grandeur.  Others, like John Warwick Smith and Joseph Farington  turned their work into engravings and book illustrations for travel books and guides.

The Lake District was now well and truly on the map!

For more information see, amongst much else, 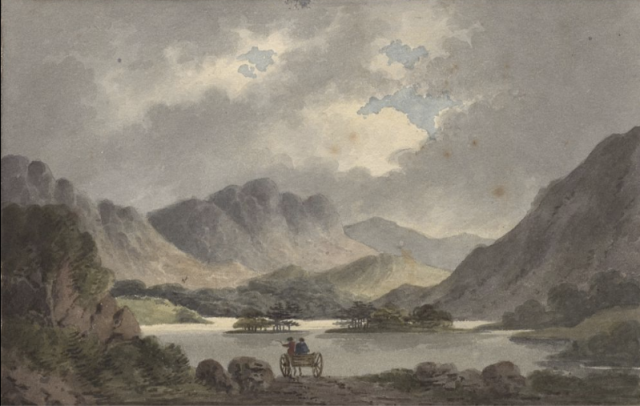