Amazingly the estate has escaped  the common fates of Victorian suburban villas, even grand ones:  demolition to make way for street after street of cheaper housing.   The escape has not been total but the core of the property still survives reasonably intact, which is even more amazing since the estate is only 6 miles from central London.

Read on to discover the story of Park Hill, Streatham…

The coat of arms of William Leaf, as described in Burke’s General Armoury, 1884, [Surrey History Centre]

Lets start with the first owner, the botanically named William Leaf. Originally from Yorkshire Leaf ran a drapery and haberdashery business in central London, which was so successful that he was able to branch out into profitable involvement with railway development and  insurance companies. He succeeded beyond most people’s wildest dreams and when he died in 1874 left an estate worth well over £500,000.   His death rather spoiled the motto he adopted for his coat of arms:Folium non defluet or The Leaf shall not fall!

Even by the late 1820s he had amassed enough of a fortune to commission Papworth, one of the best known architects of his day, to build a new house for him and his growing family, and then carry out most of the interior decor as well as the garden.

Leaf had bought Hill House, a small but prestigious estate in Streatham once the property of the Dukes of Bedford.  Now a busy and densely populated suburb of south London, Streatham then had “more first class residences… than any other locality about London” and was “the resort of rich merchants and bankers.”   Work on a new house in the grounds of Hill House probably started in 1829 and was finished by 1835, and the original Hill House was demolished. [The Hill House on the map above is a later replacement] The new mansion was in the fashionable Grecian revival style [think Belsay orAthenian Stuart] and in an extraordinary survival  dozens of Papworth’s various alternative drawings for the house, its fittings and the garden design survive in the RIBA library.

rough plan, elevations and section of the conservatory,  RIBA

But Leaf was not completely satisfied, and in 1841 called Papworth back to extend the house. By 1847 when the estate was first described in print by William Keane in The Beauties of Surrey it’s clear that Leaf had also spent a fortune on the grounds and their planting.  He was to make even more alterations and additions  over the remaining 30 years of his life.

On one side of the house was an 80ft balustraded terrace, complete with vases as well as a parterre.   Overlooking this at the end of the house was a curvilinear conservatory 60ft long, 25 ft wide and the same high which was said to have cost £1000. This would have been quite a novelty since Loudon had only invented the curvilinear glazing system in 1817.  Inside were a towering acacia pubescens [only known in Britain since 1816] and a wisteria sinensis [again only introduced in 1816] trained around the inside. 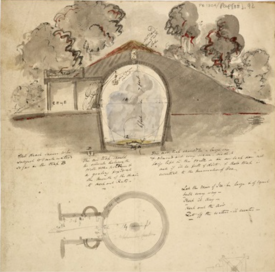 rough plan and section of an ice house, RIBA

The lawn which descended from the terrace also had impressive new introductions including an 10 ft high araucaria [or monkey puzzle, only commercially introduced in the early 1830s]  and a 20ft deodar. Apart from the usual trappings of assorted flower gardens, ponds, bowling green and garden buildings there was “a deep dell arched with massive rockwork formed into caverns and planted with arbutus and other evergreen shrubs”.  A Gothic summer-house commanded “a prospect of the hills of Harrow and Highgate and St Paul’s Cathedral”.  Beyond the formal garden areas was a pasture field surrounded by a  walk lined with trees on one side, and shrubs and flowers on the other which gave a circuit of about a mile from the house. 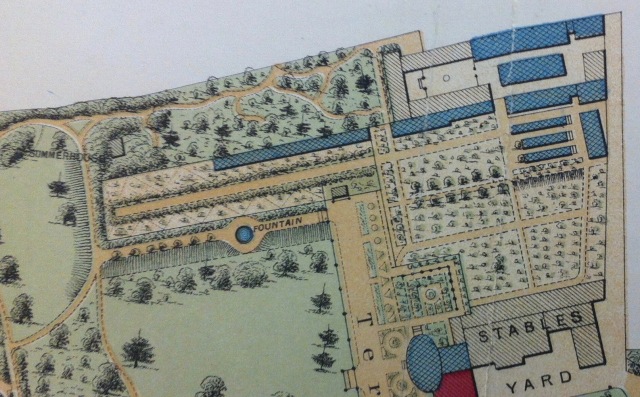 But it is the two kitchen gardens, each about an acre in extent, which attracted most of the author’s attention. Apparently more than 3000 loads of soil had been bought in to improve the ground and he also details the sizes and contents of the various vineries and other glasshouses that lined the walls, including the specialized buildings for pineapples, cucumbers, strawberries and melons. Several of these were also used for keeping stocks of plants to be brought in for the decoration of the conservatory. In additiom Leaf had an orchid house which must have made him one of the earliest collectors. 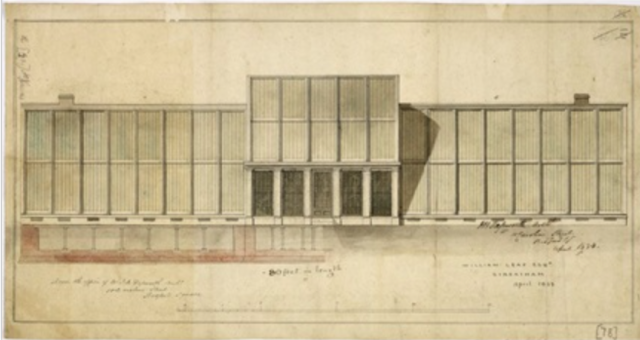 front elevation of the greenhouse, RIBA

He obviously took his gardening seriously. In 1842 his gardener, Mr Butcher was reported to have had  a team of 8 men while a later one, Thomas Page, regularly exhibited and won prizes in events such as the  Crystal Palace and RHS shows at South Kensington.

The Leaf Family, April 1857 William on the far left, from the Streatham Society’s booklet on Park Hill

Leaf was, I suspect, a good example of the Victorian self-made man, determined to improve himself and the society in which he lived. Not particularly well educated himself he discovered a love of literature and the arts. He began collecting books and paintings, often lending them for public exhibition. He was  prominent in  Liberal politics in the City of London,  as well as the anti-Corn Law League, becoming friendly with Richard Cobden who is known to have visited Park Hill.  He served on the committee of the Metropolitan Improvement Society from  1847, and that set up to raise money for the Albert Memorial in 1853. 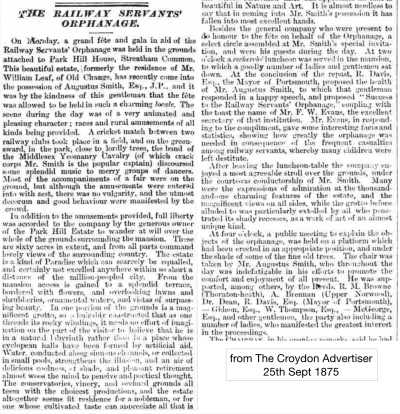 He also took great interest in a wide range of philanthropic causes which he supported generously with both time and money. A search for him in newspapers revealed that he was involved with everything from orphanages, schools and hospitals to  churches and missions, paying for new buildings as well contributing generously to appeals for victims of accidents or disasters.  He became a great supporter of homeopathy, including founding and then underwriting the day-to-day running costs of  the Homeopathic Hospital.  [There is a list of his chosen causes at the very end of this post with links to newspaper articles if you want to follow through].

It’s clear from newspaper reports that Leaf took these philanthropic duties very seriously. He often opened the gardens to visits from charitable institutions, particularly those he was a patron of,  a tradition that was maintained after his death by the house’s then occupant, Augustus Smith, who hosted a well reported fete for orphans in 1875.

When Leaf died in 1873, aged 83, his children were all well established in their own properties, mostly nearby. His will directed that his entire estate thought to be worth £500K was to be sold.  His art collections including 500 contemporary watercolours sold at Christie’s.

The firm of Norton, Trist and Watney was chosen to sell the house and drew up very detailed illustrated sale particulars including a very useful large-scale map.   It went to auction in July 1875 but failed to sell and so was then  advertised by private sale.  That seems to have led to the sale of the  2 fields  to the north and east to the Rev. A.J Carver, but the house and  gardens still failed to find a buyer. Eventually  the family changed agents, and settled on Debenham, Tewson & Farmer of Cheapside who drew up another set of sale particulars, and re-surveyed the grounds to produce a slightly different and even more detailed map.

Almost two years to the day after the first auction, Park Hill was put back on the auction block again, but again failed to reach its reserve price.  Debenham’s then re-issued their particulars with a note in red added to the top of the front page.

Given that the remaining parkland section beyond the main garden to the west was described as suitable for building land perhaps at that knockdown price it’s no wonder that a few months later, at the beginning of 1880,  Park Hill finally found a buyer in Henry Tate, the Liverpool-based sugar magnate. But Tate had no intention of building as we will see next week.

In case you want to know more about Leaf and his interests:

In public life althugh he never stood for office himself he was prominent in city Liberal politics, Chaired Anti-Corn Law protest meetings 1840s, was on the  board of National Freehhold Land Assn 1866 and involved with the  Financial Reform Union 1869, and svred on cttees of met improvement society 1847, Gt Exhibition/Albert Memorial 1853, the Shakespear Fund 1862.

Philanthropically he not only founded the Homeopathic Hospital  [and underwrote their first 5 years of financial losses] but he was involved with the London Orphans Asylum 1832, Seamens Hospital Greenwhich 1834,a fund for the victims of a fire in Austria, 1834, North London Hopistal 1836, O’Connell subscriptions 1836, he was churchwarden of Holy Trinity Streatham 1855, Warehousemens school 1855 [Dickens took Chair for a while and Leaf Treasurerer & ovesaw building of new shool at Caterham  which was opened by Prince of Wales, a fund for  victims of French floods 1856, Testimonial to Dr Livingstone 1857,  Streatham Volunteer Rifle Company 1859; paid for the chancel of Immanuel Church & the workman’s hall 1865; Spitalfields Christian Mission 1867; Homes for little Boys 1869; National Hosp for Consumption 1870 & building new block 1872; new building at Charing Cross Hospital, 1873.