The Darlys: Chinoiserie and big hair 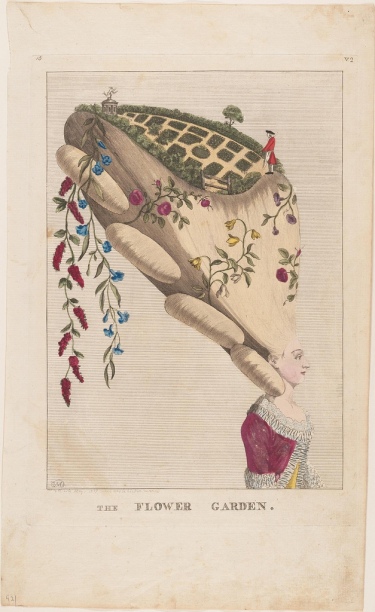 Mary and Matthias Darly were designers, engravers and printsellers in late 18thc London, who were particularly well-known for their caricatures and satires on contemporary politics and fashion. 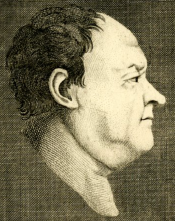 Matthias [sometimes refererred to as Matthew] illustrated books of designs for ‘ornament’,  furniture and architecture, particularly garden buildings, with a particular focus on the fashionable taste for Chinoiserie. He  was good at spotting trends and keeping up with fashion and  according to his biographer, Timothy Clayton,  became “a central figure at a time when English craftsmen were struggling for a distinct identity and for preference over foreign rivals”. Mary, on the other hand had no pretensions of grandeur, called herself “The Mistress of Fun” and specialised in sharply observed caricatures. 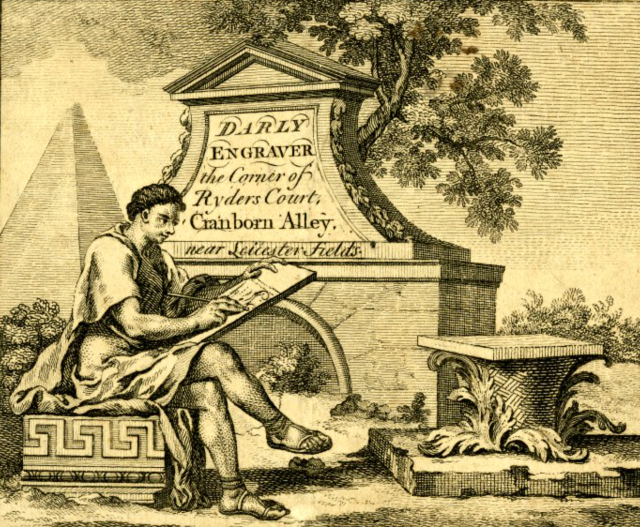 Matthias trained as an engraver and ended up doing the sort of run-of-the-mill jobs that entailed  such as visiting cards, shop bills, and book-plates.  But he was quite a talented artist too, so  also set himself as  a drawing-master even calling himself ‘professor and teacher of ornament’.

But it was when he opened his shop just off St Martin’s Lane in the West End of London that his career begins to take off.  The shop sold not only books and prints but was  advertised as a ‘Manufactory for Paper Hangings’ (that is, wallpapers) with ‘Modern, Gothic or Chinese’ designs.

It was from there in 1749 he published New Book of Ornament and in 1751 followed this up with A New-Book of Chinese, Gothic and Modern Chairs. There are no captions to the designs but it is likely they were intended for summer houses and gardens, just as  William and John Halfpenny proposed for some rather similar seat furniture in their Rural Architecture in the Chinese Taste.  Another book of chair designs followed although there are no known surviving copies, and it is only known from prints reused later in Robert Manwaring’s The Chair-Maker’s Guide (1766).

From A New Book of Chinese Designs

Darly  also engraved almost two-thirds of the signed plates in Thomas Chippendale’s The Gentleman’s and Cabinet-Maker’s Director (1754). He must have been friends with Chippendale because he took over the lease of the designer’s premises  in Northumberland Court and  their families even shared the house while Chippendale was searching for somewhere larger to expand his own business.

Imperial Retreat for Angling
from A New Book of Chinese Designs, 1754, V&A

A candelabra from A New Book of Chinese Designs, 1754, V&A

In 1754 Darly  took the taste for Chinoiserie one stage further, when in partnership with George Edwards [a natural history artist] he published A New Book of Chinese Designs (1754).

This had 120 plates, divided into seven groups – “Buildings, Appendages to Buildings, Landskips etc., Animals, Furniture, Figures, Flowers etc” –  and became one of the most influential anthologies of Chinoiserie and was used by craftsmen working in many different media as source for new design ideas.

The Bow porcelain factory, for instance, had a copy and there are surviving pieces directly copied from it.  Designs from it can also be found on contemporary linen, japanned goods, wallpapers and silverware. 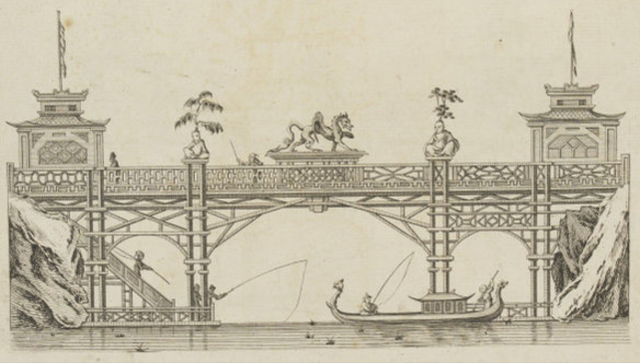 By 1756 Matthias had married Mary  and they opened  a print shop together  near what is now Hungerford Bridge in London. Together they picked up on a new trend and became the first publishers of caricatures, particularly political ones.  Of course we are used to the combination of  exaggerated physical features with sharp, often scathing satire as a commentary on current events and personalities, but in Georgian London it was a novelty and swiftly became a very popular form of expression.  Mary took a prominent role in this part of their business and opened another  new shop  at the Acorn in Ryder’s Court, Fleet Street, which she ran, describing herself as a ‘Fun Merchant’.

Soon the political content became scurrilous as well.  They joined forces with the Marquis of Townsend, a politician and amateur artist,  attacking the Tory government of Lord Bute, his Scottish family and hangers-on.[For more on this see:eighteenthcenturyephemera] In particular she targeted Bute’s association with Princess Augusta, the dowager Princes of Wales and moving spirit behind the gardens at Kew, who was widely thought to be his lover.  Mary also worked with several leading artists including James Gillray and Henry Bunbury, promising new prints   ‘as fast as their Needles will move, and Aqua fortis Bite’ (Public Advertiser, 28 Sept 1762).  The couple published  six collections of 24 caricatures between 1771 and 1773, many of which were republished in 1776 and 1779. 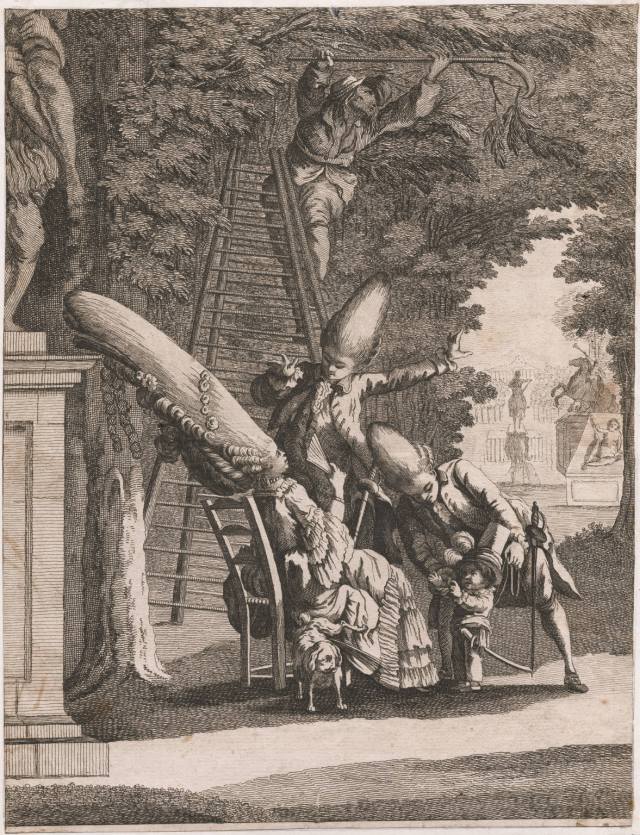 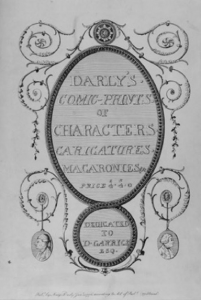 Mary also sought contributions from the general public: ‘Gentlemen and Ladies may have any Sketch or Fancy of their own, engraved, etched &c. with the utmost Despatch and Secrecy… by their humble Servant’ (ibid.). This was quickly followed by her book Principles of Caricatura (1762) which offered “Ye Principles of Designing in that Droll & Pleasing Manner”. In it she  offered the chance for amateur artists to send in designs [post paid!] saying ‘any carrick will be etched and published that the Authoress shall be favoured with.”  Business must have continued to do well and they moved  once again to bigger premises at  39 Strand, which features in the famous  The Macaroni Print Shop print of 1772. 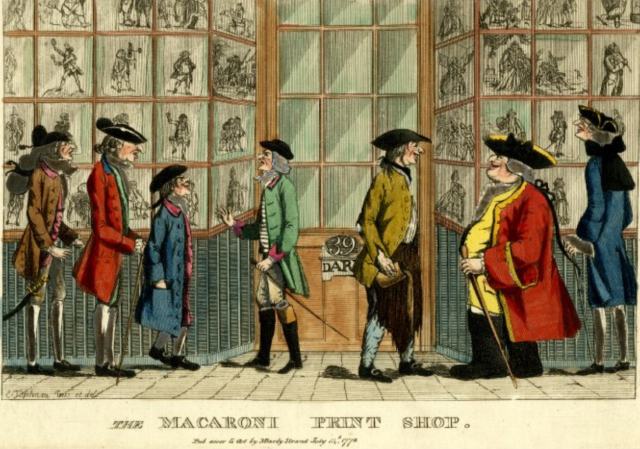 The Darlys’ new shop was one of the first to sell ready-made artists’ colours and  ‘materials of every kind used in the Polite Arts of Drawing, Etching, &c with all Sorts of Drawing books for young Ladies and Gentlemen’ (Public Advertiser, 1 Jan 1779). Nor had they given up wallpaper, because there were borders and decorations for print rooms and screens, as well as ‘Ladies Stencils for painting Silks, Linens, Paper, &c, by Mary Darly’ (Public Advertiser, 13 June 1769). 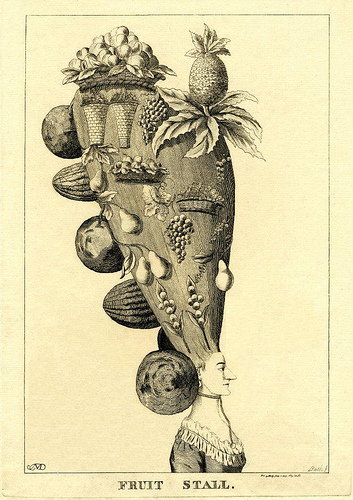 The Fruit Stall, 1777 :  a huge inverted pyramid of hair, covered in fruit of all kinds including a basket of peaches, a pineapple, strawberries, pears and grapes, and even  squash of various kinds instead of curls.

In 1773 the Darlys put on the first-ever commercial exhibition of original caricatures, ‘Darly’s Comic Exhibition’, at their shop in the Strand. It is a sign of the prevalence of female cartoonists and caricaturists by that time that of the 233 exhibits nearly a third — seventy-three drawings — were by women.

Mary was the driving force behind the Darly ‘brand’, not only designing but engraving and etching the plates as well. Many of the designs feature only the initial “M” before “Darly”, making the attribution of authorship purposefully ambiguous in the 1750s and 1760s when only a few female printmakers and publishers were in the business. 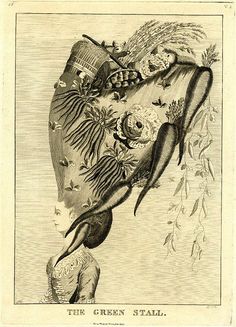 The Green Stall, 1777: another monstrous hairdo this time decorated with carrots,  asparagus, a cabbage, turnips, lettuce and trails of pea pods imitating ribbons.   Notice the set of scales with  potatoes and the herbs instead of  ostrich feathers

While Mary was specialising in caricatures, Matthias Darly continued to publish books of designs.  A New Book of Ceilings appeared in 1760 as did Household Furniture in Genteel Taste which  he co-authored with Robert Sawyer. 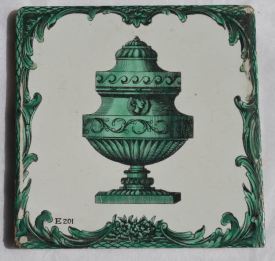 These were followed by  Sixty Vases in 1768, The Ornamental Architect between 1769–71, A New Book of Ornaments in 1772, and A Compleat Body of Architecture in 1773.  These were generally all quite similar in content, and not particularly different to those published by other architectural writers such as Batty Langley or William and John Halfpenny.  What is different though is the quality of the engravings. Matthias’s  skill in this field was well recognized and he  was commissioned to engrave plates for other books, such as  Ince & Mayhew’s Universal System of Household Furniture (1762), and most prestigiously,  41 plates for Vitruvius Britannicus. These were even exhibited, along with ornaments for print rooms,  at the Society of Artists and the Free Society of Artists.

The Vis a Vis,

But fashions and circumstances change and there was a clamp-down on political satire so the Darlys switched tack, turning  their attentions to less sensitive, if equally mockable things such as fashion and manners… and that’s when their most famous garden-related prints  were produced. They appear as part of a series on outrageous hairdos  and put Carmen Miranda to shame with their array of vegetable and fruit ornaments.

The inverted heart-shaped pyramid of hair was the height of fashion in 1776 when this print was issued, and ostrich feathers were newly in vogue too.  Also rather surprisingly instead of showing women with Capability Brown landscapes atop they show rather old-fashioned formal garden.

The extravaganza, or the mountain head dress, 1776, Hairdo adorned with ostrich feathers, garlands of flowers,  carrots, bunches of grapes etc.

What is equally surprising is that although you’d expect the object of their satire to be upset or perhaps embarrassed, it seems exactly the opposite was often the case and there are press reports of people actually imitating the prints!  The General Post for May 7-9, 1776 noted  a woman attending a masked ball with “her head dressed agreeable to Darly’s caricature”, and in July another was at the spa gardens at Bagnigge Wells “with her hair dressed in the extreme of the modern taste, the enormity of the size exactly resembling that which some of the print shops exhibits …She was mobbed and had to flee the scene.” Morning Chronicle and London Advertiser, July 2, 1776).

Mount Parnassus or the Bath Sappho

Once again they invited the public to submit ideas or even sketches for new prints although it warned that ‘illiberal and indelicate Hints, such as one marked A. Z. [were] not admissible’ and that ‘low or political Subjects will not be noticed’ (Public Advertiser, 15 and 22 Oct 1772).  It was clearly a popular idea and the following year they hosted an exhibition of 233 original drawings and offered  sets for sale.

The Botanic Macaroni, 1772, thought to be a caricature of Joseph Banks

“Mr. Darly, printseller”,  passed away at his house “in the Strand”, probably above his print shop in late January 1780 (London Evening Post, January 25-27.)

Darly satirized as an old man

Just before his death he himself was satirised as old, fat and gouty, standing next to an ass labelled  ‘We are Professors of Design’.  It was certainly Mary who published the collected edition of Darly’s Comic Prints of Characters: Caricatures, Macaronies etc. in 1776 advertising it modestly as ‘the most entertaining Work ever published in Europe’ (Public Advertiser, 1 Jan 1779). That was their last major piece of work, although prints continued to be produced by “M Darly” until 1781.  The London Daily Advertiser (29 Jan 1780) reported that the death of ‘Mr Darley, printseller, in the Strand’ had taken place on 25 January, although of course that could be the date of Mary’s death instead.

If you want to see more of their work the largest online collection is held by the British Museum.

From A New Book of Chinese Design, V&A

2 Responses to The Darlys: Chinoiserie and big hair