The other Chelsea Flower Show…

As the eyes of high society and the horticultural  world turned to Chelsea, the doyenne of all flower shows world-wide, this week I thought it was time to turn my attention towards another  even older connection between the plant world and Chelsea. These date back to about 1743 and the foundation of the Chelsea porcelain factory, sited close to the river and the even older-still Chelsea Physic Garden. 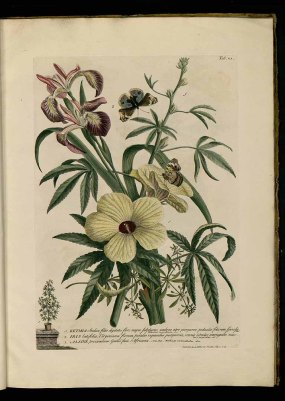 If you’re wondering what plants have got to do with porcelain china you’ve obviously never eaten soup from an iris, custard out of a cabbage or drunk tea from a cauliflower. 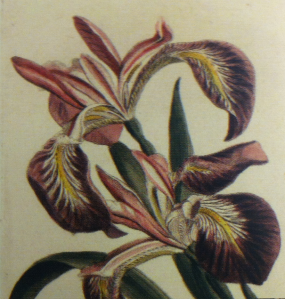 Still puzzled? Then read on…

Once high quality Chinese porcelain started to arrive in Europe in large quantities at the end of the 16thc it wasn’t long before westerners wanted to acquire the secrets of its manufacture. The hunt  to acquire them has been well covered by Janet Gleeson in The Arcanum [1998], the story of the first successful porcelain factory at Meissen in Saxony. While trying to imitate Chinese ‘hard-paste’ porcelain, alternative techniques were developed which enabled the making of  ‘soft-paste’ porcelain made of local clays and fired at lower temperatures.

Nicholas Sprimont had a wife and a sister, who are depicted here with him and his works.

By the mid-18thc porcelain factories using these methods were opening all over western Europe, although the first serious mention of soft paste porcelain in England wasn’t until 1742 when Thomas Briand gave a demonstration of  it at the Royal Society.  The following year Nicholas Sprimont (c.1715-1771), a  silversmith of Huguenot origin, used that knowledge to open the Chelsea factory. By 1757 there were at least 7 other porcelain factories in the country, probably because ceramics were becoming increasingly fashionable as dining ware.

In these early factories porcelain design and manufacture was often undertaken by silversmiths or goldsmiths rather than professional potters, and most of the craftsmen employed were of French or Flemish origin.  The Chelsea factory was in Lawrence Street, close  to the Ranelagh pleasure gardens in London,  perhaps to attract aristocratic patrons. Although little is known of the Chelsea factory’s earliest years, Sprimont adapted many familiar silver designs for his new and highly fashionable porcelain pieces for the table, while others were taken from Meissen models. They included a range of tableware inspired by plants. 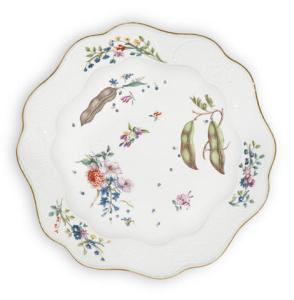 A Meissen dish from the Bruhlsche allerlei service c.1745, Bonhams

Meissen had started producing botanically inspired plates in 1742 with small-scale, rather delicate depictions taken mainly from Phytanthoza Iconographia by Weinnman but what came out from Chelsea was much more exuberant and showy.

Of course animals, birds, vegetables and fruits were also being employed by silversmiths, textile and wallpaper designers, and many other crafts, so Chelsea cannot claim to be unique but  it’s one thing to be interested in using nature as a source of ideas and designs and another to be accurate and realistic, and the new Chelsea wares were definitely both of those things.

So where did their artists and designers get their ideas from?

Plate with melon , convulvulus and other flowers and insects from Painting Paradise

According to an advertisement in Faulkner’s Dublin Journal, 1 – 4 July, 1758 it sounds like actual living plants.  The paper announced the auctioning of “…Three very fine tureens of the Chelsea China…..one in curious plants, with table plates, soup plates and desart plates enamelled from Sir Hans Sloan’s plants”.  Unfortunately no other contemporary adverts or catalogues mention Sloane. And if you’re wondering why there should be an ad in an Irish newspaper, it’s because Dublin was at the time, a great cultural centre and the second largest town in Britain and so a good potential market for fashionable goods.

Unfortunately the ad’s claim is unlikely to be strictly true because Sloane did not have a garden of his own, and what plants he did have were dried and in his herbarium.  However he was also the benefactor of the  nearby Chelsea Physic Garden, so it’s much more likely that the paintings were based on plants growing there.   But the ad’s description has stuck, and this range of Chelsea designs has become  known as “Hans Sloane” wares.

Pair of mulberry leaf dishes from Kevill,-Davies [see below]

Apart from living plant specimens to use as models Chelsea’s artists and designers  also had access to a growing range of contemporary botanical and gardening books.  There was no shortage of them. Between 1700 and 1720 some 27 were published, with another 23 in the 1730s, 24  in the 1740s and 32 in the 1750s.  By the Critical Review in 1763 was able to claim that  “natural history is now by a kind of natural establishment become the favourite study of the times.”

One book that must have been particularly inspirational was Plantae et Papiliones Rariores published in 1748 and containing a series of exuberant and colourful plates by Georg Dionysus Ehret who had worked for Linnaeus and  was the foremost botanical illustrator during the mid-eighteenth century. 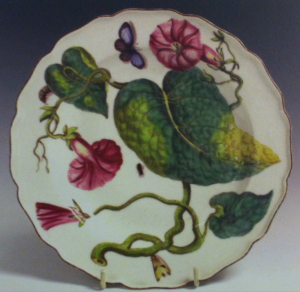 Ehret had helped illustrate  Mark Catesby’s Natural History 1731-43,  and several other accounts of colonial natural history. He understood plant structure and his images are impressive both artistically and botanically.  Unsurprisingly given the title the plates also include images of butterflies and insects and these too found their way onto plates and dishes. 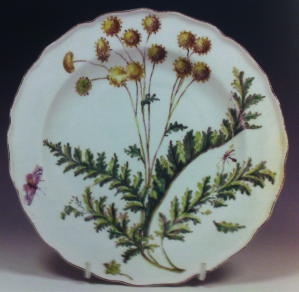 Achillea, c1755 from Kevill-Davies [see below]

Chelsea’s artists probably also used books by Philip Miller  the curator of the Physic garden from 1722 until the late 1760s, in particular his 1756 Figures of the most Beautiful, Useful and Uncommon Plants described in the Gardeners Dictionary.  This was originally published in 50 monthly parts from 1755, at 5/- per part for the hand-coloured copies, and 2/6 for those left plain.

Achillea from Miller’s Figures of the most Beautiful, Useful, and Uncommon plants described in the Gardeners dictionary Vol. I, 1755-1760

The illustrations were drawn from living specimens in the Chelsea Physic Garden or drawings supplied by his network of correspondents, including John Bartram, the Pennsylvania naturalist, and Dr. William Houston, who travelled widely in the Americas and West Indies.  In the preface, Miller stated his intention of publishing one figure of a plant for every known genus, but abandoned this in favor of, “…those Plants only, which are either curious in themselves, or may be useful in Trades, Medicine, &c. including the Figures of such new Plants as have not been noticed by any former Botanists.”   What he perhaps hadn’t realised is that they would also be used for decorating plates and other tableware.

Amongst other prominent botanical works used were by Jacob van Huysum who provided drawings for Catalogus Plantorum, for the Society of Gardeners,  Elizabeth Blackwell who published A Curious Herbal in 1737-9, and JC Trew’s Plantae Selectae.

The choice of plants chosen for use seems to have  no particular rationale. There were new exotics, long established garden favourites and even some weeds. There were flowers and fruits but also vegetables suggesting  a rise in their cultural status – perhaps because of changes in cooking habits and the prominence given to the kitchen garden in gardening books, including those by Miller.

another version of Cereus  from Kevill-Davies [see below]

Whatever the sources these “Hans Sloane” designs  are “chunkier”,  larger and more voluptuous than most 18thc florally derived ceramics.   The main specimens were displayed naturalistically rather than in stylized form while the rest of the surface was  filled with  other smaller unrelated sprigs of flowers or leaves [sometimes unconnected with the flowers portrayed] dotted around,  as well as with highly coloured butterflies and insects.  Sometimes the images are deliberately placed to cover flaws in the firing or glazing.

While the plants  are generally extremely botanically accurate,  there was some artistic licence over colours since white flowers would not stand out on white porcelain, and over some leaves and stems, where the overall aesthetics effect were more important than accuracy: after all these were for the dinner table not a botany book.

A very detailed analysis, of the sources, with images of china and prints side by side, for about 100 pieces of Chelsea ware  was undertaken by Sally Kevill-Davies  and published in 2105 as Sir Hans Sloane’s Plants on Chelsea Porcelain. This was written in conjunction with a 2015 exhibition of these designs in London.

But Chelsea didn’t just make 2-dimensional wares – they also made a whole range of 3-dimensional things from figurines and vases,  to tea services and clock cases. But they also  made tableware in the form of realistically presented fruit and vegetables, particularly those that were exotic and expensive or difficult to grow. Their accurate detailing and scaling suggests that they were taken from life, and one possibility is that rather than drawing and then modelling them,  Chelsea’s craftsmen may have made moulds from fresh produce. 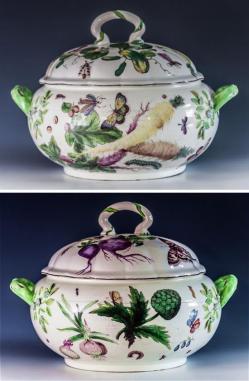 Although Meissen had started the fashion for these vegetable forms, Chelsea’s designers were more experimental and their output was unprecedented in its  range and playfulness. It was chinaware a la rococo. So by the second half of the 18thc the dining room table in grand establishments was laden with plates, serving dishes, tureens and other pieces which echoed nature: everything from asparagus and cabbages to  seafood and farmyard animals and birds. 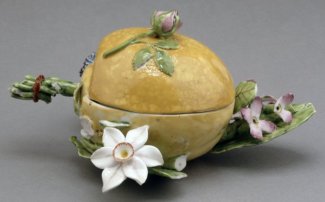 Box and cover in the form of a lemon, with narcissus and rose decorations, c1755 British Museum

It may have been fragile – and expensive – but this fine porcelain  satisfied a real demand for artifice and luxury in the same way as the rare plants that were painted on them or as the rare fruit and unusual food that was served up on them.  Porcelain also had the advantage over metal dishes of  being odour-free and unlikely to taint the food.

I was a little surprised to discover that these items were not necessarily created to serve related foodstuffs.   In a typically rococo conceit tureens and dishes based on vegetables were not used for serving soup or other savoury foods but mainly for the dessert stage of a meal which was in the 18thc the course  on which the greatest effort and expense were lavished. Even ices and other desserts were commonly  shaped  to resemble vegetables too.

Just listen to this account of a dinner party hosted by the Duke and Duchess of Norfolk in 1756: “the Table was Prepared for Dessert which was a Beautiful Park, round the Edge was a Plantation of Flowering-Shrubs, and in the middle a Fine piece of water with Dolphins Spouting out water and deer dispersed Irregularly over the Lawn, on the Edge of the Table was all Iced Creams and wet and dried Sweetmeats, it was such a Piece of work it was all left on the Table till we went for Coffee.” [quoted by Kevill-Davies] 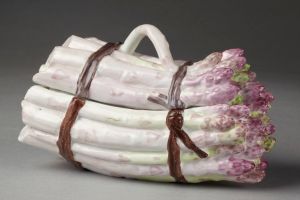 So it’s not surprising that Chelsea responded with pieces that were both functional and fun such as those listed  in the 1755 sale such as  a ‘large cabbage leaf and bason, 2 vine leav’d dishes & four sunflower leaves’, ‘two fine melons for desart,’   ‘four fine large apples and leaves for desart’ and cauliflower ‘sweetmeat boxes’.

Ill health forced Sprimont to sell the Chelsea factory  in 1769 and eventually the  factory closed and the kilns demolished  in 1784 with production moving to Derby.  But while Chelsea may have only flourished for some forty years  some of its ideas lived on elsewhere as rival factories had  started producing botanically inspired pieces.

Tureen and cover in shape of Cos Lettuce, Longton Hall factory c.1755-60

Amongst the best known were the Longton Hall factory in Staffordshire, the Bow factory, and of course  Josiah Wedgwood’s factories.  They turned out  botanical pieces such as cabbage tureens,  lettuce pots and pineapple teapots as well as other pieces which had spouts, handles or other details modelled on vegetables or fruit.  And perhaps the best known and most successful design in the whole range was his cauliflower teapot… which is where I shall finish and go and make some tea myself!

2 Responses to The other Chelsea Flower Show…