In a recent post about Cotehele in Cornwall I included a couple of images of lino prints by Rena Gardiner, a Dorset-based artist and printmaker.  I was so taken with them that I decided to find out more about her. Googling came up with very little apart from the fact that there was a recent biography and that she’d produced a lot of guidebooks for the National Trust in the 1970s and 1980s. So it was off to the British Library to look at them.

The biography is a beautiful produced book by Julian Francis and Martin Andrews, packed with images of her work but still containing very little in the way of biographical information.  It appears Rena Gardiner was a quite private woman for whom work was the centre of her life.

In the words of one critic: “Combining the great tradition of British topographic artists with the rich era of autolithography of the 1940s and 1950s, she created her own very personal and individual visual style. An unsung heroine of printmaking, uninterested in publicity or fame, she created an artistic legacy that is instantly recognisable for its exuberant use of colour and texture.” 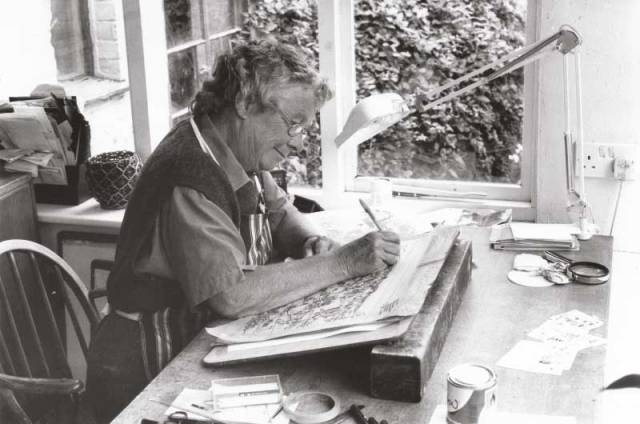 Rena Gardiner in her studio

Rena Gardiner was born in Epsom, where her father was an electrical engineer but also  a skilled technical artist.  In 1946 she enrolled at nearby Kingston School of Art to study graphics. During her time there she took the opportunity to visit as many exhibitions as she could and found herself inspired not by traditional art forms such as painting and etching but by much more modern artists and their techniques.She discovered the works of Edmund Bawden, John Piper and Eric Ravilious all of whom practiced lithography.    She also discovered Kenneth Clark’s project Recording Britain and works by then unfashionable early landscape artists such as John Sell Cotman  and Thomas Girtin.

More significantly she was able to meet practicing illustrators including Joan Hassall, the the first woman to be admitted to the renowned Art Workers Guild founded by William Morris, who later became its first female Master,  and the elderly Gwen Raverat, a founder member of the Society of Wood Engravers.

In her holidays Rena  travelled as much as she could, sketching and drawing all the time, particularly buildings and their settings, and landscapes.  She was also able to enrol on  a book illustration course,and found that could well be her forte. However it was clearly difficult to make a living simply from illustrating, so  she decided that  she needed something solid as a career to fall back on. LIke many others she chose teaching and took a one year art teacher’s course at the Institute of Education in London, with the intention of working on  book illustrations in her spare time from the classroom.

Her first job, in 1951 , was at Leamington College for Girls, and it was there created her first book, Royal Leamington Spa (1954), printing and binding all the copies herself. This image really captures the  post-war decay of this wonderful Georgian development. The houses may still be elegant but the gardens are a mess, the wooden fencing (which presumably replaced iron railings taken for the war effort) are falling to bits, the road is weed-infested and even the urn is about to topple off its plinth. And notice the small boy playing Cowboys and Indians. 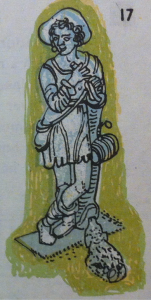 The Shepherd in the gardens at Charlecote

Of course there were, even then, advantages in being a  teacher, and in her holidays she continued travelling, being particularly influenced by the colours and  architecture of Italy, especially Venice and Rome.  Her biographers belive that “this early period saw the maturing of her skill and talent for drawing, painting and printmaking and, in particular, her very personal approach to lithography.”

The Shepherdess in the gardens at Charlecote

While Rena concentrated on buildings and natural rather than designed landscapes,  gardens were often included as the settings for sites that she illustrated, and she often used images of individual  garden features such as statues or urns in her work.

Part of a mural of  Bournemouth School for Girls, completed in 1961 and still in place there. It is 10ft x 30ft and very unusally for her is in oil on canvas panels. How many schools have such planting around them today?

In 1954 she moved to Bournemouth School for Girls and rented a cottage at Wareham  in Dorset where she set up a basic printing press using an old mangle. This enabled her to produce her first  illustrated book on Dorset in 1960. The images for  Portrait of Dorset were drawn directly on to the lithographic plates, and she applied the colour as the plates were being printed. The result was that none of the limited edition of just 30 copies were identical.

She then upgraded the mangle and graduated to what she termed “a 6th hand” commercial offset litho press. It meant that she could think about producing something on more commercial lines. She chose to produce a guide book to Corfe Castle, which came out in 1963, which she hoped would sell in local book and tourist shops.  Although it was still a limited run of only 750 copies luckily for her in terms of her ‘career’  one of them was seen by a Canon of  Salisbury Cathedral who soon proposed she illustrate a new guidebook for the church. She printed 3000 copies of this in 1964. The Salisbury guidebook  in turn to led to another for St Georges Chapel Windsor in 1966, and over the next few years she also self-published books on several other cathedrals and churches.

In 1965 she moved from Wareham to a small house – The Thatch Cottage – at Tarrant Monkton, where she remained for the rest of her life.

The cottage was small but it allowed her enough space to install a much larger printing machine and next came  3 large format books about Dorset in 1968, 1969, and 1970.   The East Winterborne Valley, Dorset: The Isle of Purbeck and Dorset: Tarrant to Blandford which were all created while she was teaching full-time but are probably her finest works. 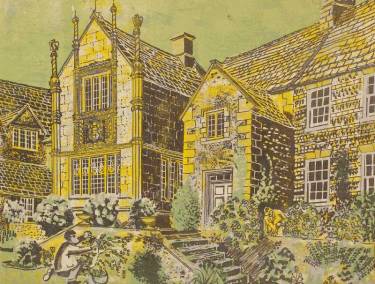 They were her own choice of subject and not commissions, and meant she could continue  experimenting in technique, texture and colours. Stylistically they are almost anachronistic showing how she did not “move with the times” but remained under the   influence of those artists she had first encountered at Kingston such as John Piper and more particualrly Eric Ravilious and Edward Bawden   But in truth what she makes are images that  are idiosyncratically vibrant and lively… and timeless.

Rena fitting a lithographic printing plate onto the press at home in Tarrant Monkton.  Photo by Martin Andrews,1993

It was after these had been published that she was approached by the National Trust to see if she’d be interested in producing a  book about Laycock Abbey, the former home of William Fox Talbot, the pioneer of photography and a member of the same family who created the gardens at nearby Abbotsbury.

From Look at Montacute

She was, and this offer gave her enough confidence and cash to give up the security of her teaching post  to begin illustrating and printing full-time.  Look at Layock was published  in 1971 but led to other commissions from the Trust for guidebooks mainly about  their west country properties.

From Look at Montacute

For example in 1980 the Trust asked for 10,000 copies of Look at Montacute for which she was to be paid 21p each.  What is extraordinary is that she worked alone doing everything herself. She designed, drew, printed, published, collated every copy herself. She even drove herself between properties, buying a dormabile to sleep in. The only things she did not do were make the paper and ink, and one suspects she’d have done that to had she had time.

Granny’s summerhouse and the orangery at Charlcote

Other National Trust sites she produced guidebooks for included most of their properties in Cornwall, but also Charlecote, Wallington, Chedworth, and Hardwick. She never condescended with the text, so although many of these, and indeed her guides to cathedrals and other sites,  were aimed at children, no adult could or would have been insulted by her approach or style.

Summerhouse in the Valley Garden, Cotehele 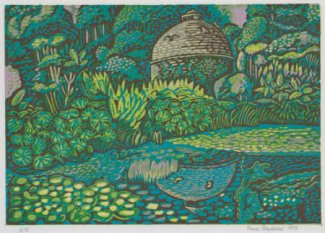 Linocut print of the dovecote in the Valley Garden at Cotehele, by Rena Gardiner. Signed and dated. 6/18.

Perhaps the site with most significance for her work and reputation was  Cotehele which she  first visited in 1973.  She started work on its guidebook soon afterwards but after her initial visit was also  offered an exhibition there when she was ready. In the end that didn’t happen until 1999 when, moving away from lithography she produced a series of 40 new linocut prints about the estate and its surroundings.  When they went on show she  sat in the house’s Drawing Room giving demonstrations to visitors of how she worked.  Unfortunately the Cotehele show  was to be her last major work and she died soon afterwards of a heart attack at home in Tarrant.

Cotehele’s old orchard in the moonlight, looking towards the Northwest Tower 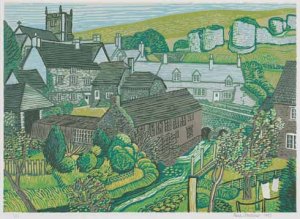 Rena Gardiner made no attempt to market her work to the  big publishing houses of the time, preferring to be  a one woman band, working alone on all these projects.   This lack of a PR machine maybe goes some way to explain why she was so little known outside her immediate circle of clients and admirers.  But her reputation has grown again in recent years and there have been exhibition at several major galleries and museums of her work.

And if you want to know more her, her biographers have set up a website dedicated to her and her work:

and there’s an interesting and easy-to-listen-to  lecture about her  by one of them, Martin Andrews, on Youtube.