Ada and her garden village 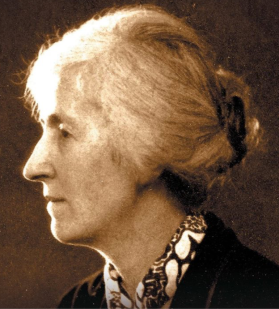 It’s not often I’d guess that a local election manifesto gets taken that seriously, is implemented and referred to and read decades after it was written,  and even  talks about gardens. But an exception might be  the 1922 election address by Bermondsey Labour Party.  Leading lights in the local party then were Ada and Alfred Salter.

Almost a year ago I wrote about Ada and her campaign in the 1920s and 1930s to beautify Bermondsey, an inner London borough and one of the most deprived and overcrowded parts of Britain. But she did more than just plant trees and open parks.  Important though those ideas were they were just a part of a massive campaign to improve the living conditions and lives of people  just a stone’s throw from central London.  Ada, together with her husband Alfred, the doctor turned MP, led campaigns to improve public health – remember this is pre-NHS –  and clear the borough’s slums.And the slums were to be replaced not with high-rise  blocks but with garden villages.

I am indebted to the research behind John Boughton’s blog Municipal Dreams, which I used for the starting point for this post. 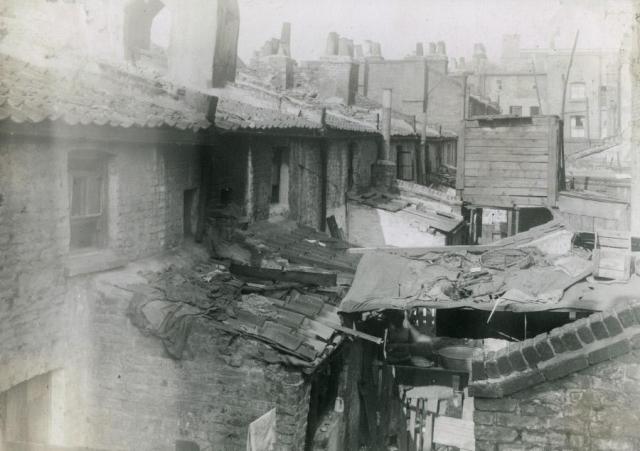 Bermondsey was a densely populated borough. There were about 120,000 people living on just 900 acres, about three quarters of them, according to the Public Health Department, in overcrowded conditions. Good housing was in desperately short supply.

The  winning Bermondsey Labour Manifesto for the municipal elections in 1922 stated:  “The Labour Party stands for a cottage home for every family, and though this may not be possible at the present moment, we shall work and fight for measures tending to that end.  No more Progressive barracks and Coalition skyscrapers!”  [The barracks and skyscrapers were references to the tenement blocks preferred by their political opponents.] Labour’s plan was to not just replace slums and tenements with cottage style housing with gardens but to open health centres, public baths, laundries and communal kitchens.

Of course fine words butter no parsnips so did the manifesto actually mean anything?  Surprisingly the short answer is yes, because Labour took control of Bermondsey in 1922 and appeared determined to implement their promises. And  they did so against the background of post-world war reconstruction, austerity and the economic uncertainty and depression of the 1920s.

One of the things that frightened the wartime national  government was the realisation that many of the those from Britain’s cities who joined the armed forces during the war were seriously unhealthy.  To us this would be unsurprising given the overcrowding and poor quality of housing stock in many inner city areas but the extent and effect it had clearly took the authorities by surprise.   As the war finished Lloyd George’s administration pledged Homes Fit for Heroes for the returning troops and asked the health minister, Dr Christopher Addison to draw up legislation.

Addison was not only a prominent doctor, but the MP for Shoreditch, another equally poor London borough, so he knew what he was talking about. The resultant 1919 Addison Act  required local authorities to provide  housing to a set of minimum standards. [Of course this is the PR version and  the policy wasn’t quite that straightforward as Martin Stilwell points out in  Housing the Returning Soldiers].

It was to be financed partly by the rent from tenants but largely by local ratepayers. To sweeten the pill for them and to maintain central control – Whitehall also promised large subsidies for schemes it approved of. So the government was, in theory, committed to reconstructing Britain’s slums with healthier, airier and greener housing.

They had good models to work on. Garden cities and suburbs had been built in several places including Letchworth, Hampstead and New Earswick, and in 1912, just before the First World War broke out,  the architect and planner Raymond Unwin  who had been involved in all these published his pamphlet Nothing gained by Overcrowding.

Its ideas were taken up by the Local Government Board  which recommended that when rebuilding the slums  instead of building tenement blocks “Cottages for the working classes should be built with wider frontages and grouped around open spaces which would become recreation grounds.”  These new developments would be mainly situated on greenfield sites on the outskirts of cities, and be self-contained high-quality low-density  family homes, in spacious surroundings often around 12 houses an acre.  They would have bathrooms and sculleries as well as generous sized gardens to encourage the tenants to grow their own vegetables, and  even a privet hedge at the front and an apple tree at the back.

from Unwin’s Nothing Gained by Overcrowding

These ideas were accepted by the London Labour party and one of its leaders, Herbert Morrison, the future leader of London County Council and Home Secretary, went further.  Writing  in May 1918 he argued that future policy should be to “break up London as we know it, to encourage the exodus outwards…and to plan a wide outer ring on garden city principles…We would build no more tenements…we would build new towns where possible, or garden suburbs where that was the best we could do.”

But not everyone wanted to break up communities or move to these distant new estates despite their many advantages, and not everyone agreed that they should have to. Instead they argued that the appalling housing of the inner city should be replaced by garden suburbs on the same spot. That was certainly  the plan  of  Bermondsey Labour led by Ada and Alfred Salter.

The statue of Alfred Salter by the Thames on Bermondsey Wall, DM May 2017

The battle commenced from Day One with Bermondsey’s  plans for the first replacement estate on the site of the Salisbury Street slum, where 1300 people lived on just 4 acres.

It was to be  a small estate of just 54 three bedroomed cottages, each with a  living room, scullery, larder, bathroom and lavatory and  hot and cold water.  Designed by Ewart Culpin they were intended to be  ‘trim structures of warm, red brick, some with bay windows, others with recessed doorways, sheltered by an arched doorway’.  Crucially each would have a garden and the streets would be wide and tree-lined.  The scheme would be built by Bermondsey Council’s own labour force and each cottage would cost £550.

It was a battle to get the scheme through.  Opposition councillors argued strongly for large, cheaper and more “efficient” tenement blocks.   The London County Council – then under the Municipal Reform Party – or the Conservatives wearing a less value-laden label– argued  forcefully that Wilson Grove would only rehouse 400 of the residents, leaving 900 displaced and so “create not only hardship to…such persons who would have to be accommodated elsewhere, but an unnecessarily large burden on the community for the sake of the favoured few who would be housed in the cottages.”  The feeling was echoed by neighbouring councils who feared that  Bermondsey, given its shortage of land, would simply try and rehouse those 900 outside their own boundaries adding to their own existing overcrowding.

from Alderman Douglas, Twelve Years of Labour Rule on the Bermondsey Borough Council 1922-1934. Image taken from LCC Municipal on Twitter

from Zoopla. With sale of local authority housing these houses are now selling for c£750,000

Opponents had strong political [rather than administrative] allies in the Ministry of Health, and this was important because it was  the Ministry who gave the rebuilding grants and housing subsidies on which poorer boroughs like Bermondsey depended.  In turn the Ministry depended on the Treasury, which was concerned, as ever, for the bottom line and argued against such outrageous expense in the first place. Elsewhere, notably in Bethnal Green, another equally deprived area of London’s East End, the ministry prevailed and tenement blocks were generally accepted but Bermondsey refused to back down over its plans for a garden village.

from 1963 Metropolitan Borough of Bermondsey guide. Image from LCC Municipal on Twitter

It would have been a stalemate  until a change  in government, albeit short-lived, in 1924 meant it was finally agreed by John Wheatley, the incoming Labour minister of Health.   When Wilson Grove was finally officially opened in 1928 Alfred Salter was proud that the borough had stuck to its principles  rather than “hurriedly throwing up dwellings which in 50 years’ time will become slums and therefore a disgrace to civilisation…”  But it was the one and only low density scheme to be approved.  Plans for another cottage estate in nearby Vauban Street were blocked and the Ministry, now out of Labour hands again, dictated that tenements were the only approach it would fund.

Nevertheless by 1933 the Daily Herald  was still able to report that Bermondsey had done “more slum-clearance than the whole of the rest of London put together”. Indeed by 1940 when the war stopped all building operations, the 63 acres designated for slum clearance had been demolished  and  3,500 new dwellings built in their place [figures from Official Guide to the Borough of Bermondsey 1960] . Wilson Grove is  still there and wouldn’t look out of place in any of the post war new towns or outer London suburbs. 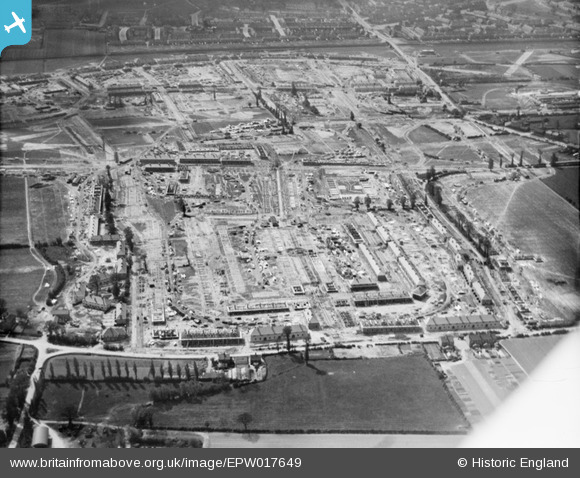 Becontree Estate under construction 1927, Britain from the Air

The London Labour Party and Herbert Morrison also stuck to their support for the concept of  the garden suburb as a way of dealing the amelioration of living conditions in the inner city.  But the demand was overwhelming and  the first small suburban ‘overspill’ estates gave way to bigger and bigger schemes, some of them virtually towns in themselves. Becontree in Essex for example built on the cottage style principle was begun in 1921 and by 1935, had 26,000 houses and more than 100,000 inhabitants making it probably the largest public housing development in the world.  This was happening not just around London, but all Britain’s major cities in the interwar period.  And it was not just the public sector that was building, the private sector did so on an equally grand scale.  But gardens and decent homes for all had a price:  rapid sprawling suburbanization  around all Britain’s urban areas.

Luckily, and probably more significantly, Morrison also backed the idea of the protection of open countryside and green spaces around London that Ada had also championed, and by 1937 the protection of the Green Belt was on the statute book, and later incorporated in Patrick Abercrombie’s  far-sighted plan for post-war London. [More on that in another post one day].

Ada’s biographer Graham Taylor, rightly concludes, that  “today we take for granted what she fought for all her life” although unfortunately political changes in housing policy, notably the sale of council housing, has undermined her vision of a shared local community.  Nevertheless the area is still full of trees and Southwark Council [which succeeded Bermondsey Council following the amalgamation of boroughs in 1965] has, despite all the austerity measures,  still managed to maintain a high standard of street and public planting in the area. That much I’m sure would have pleased Ada. I’m sure she’d also be pleased, if somewhat surprised that Wilson Grove is now a conservation area. However I think she’d have taken an extremely dim view of the fact that those houses, just a stone’s throw from the Thames and a tube station, have been sold off and you can now even rent one as a tourist via Airbnb.

For more information on the Salters and the improvements they fought for I recommend looking at John Boughton’s new book on public housing: Municipal Dreams and his excellent blog about public housing which has several posts about Bermondsey and the Salters, as well as Graham Taylors biography of Ada 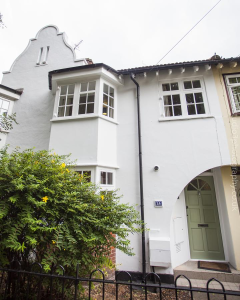 You can also read the reports of the Medical Officers of Health for all London boroughs, including Bermondsey at  London’s Pulse, a project run by the Wellcome Foundation.

Also worth looking at if you can access them are:

The History of Council Housing, a website run by University of the West of England