The indefatigable John Fraser and his American Nursery 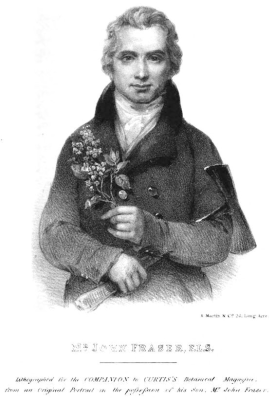 John Fraser was another one of those botanists and plant hunters who once set the horticultural word on fire with their discoveries but are now scarcely remembered.  Like so many of them he was Scottish,  born in Inverness-shire in 1750, and like so many others of his countrymen, especially gardeners, he took the high road to England.  He married and in the 177os opened a hosiery shop in Chelsea dangerously close to the Society of Apothecaries Physic Garden.   He began visiting and soon became friends with William Forsyth,the then curator, and it wasn’t long before he became besotted by botany that he gave up selling socks  and  became a plant hunter instead.

There are brief biographical articles by John Claudius Loudon [ in Arboretum et Fruiitcum, 1844] and Robert Hogg [The Cottage Gardener, July 22nd 1852] which suggests that from then on his life seems to have been one long adventure… 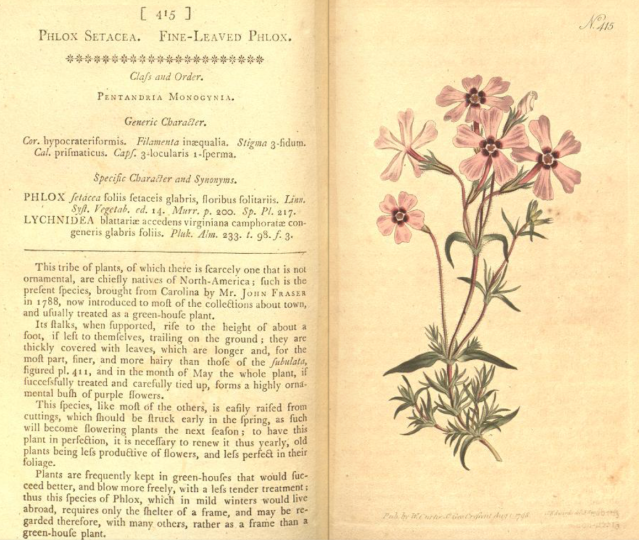 His first voyage, backed by Forsyth in 1782,  was to Newfoundland  sailing with the fleet that accompanied  its new governor, Admiral John Campbell.  This was during the aftermath of the American War of Independence and Britain was still  at war with both France and Spain, and he had the first lucky escape of his career as the fleet was attacked by the French and Spanish navies  and two-thirds of it captured.

Having survived that, his next trip was to the American south-east in 1783/4.  Again backed by Forsyth, as well as William Aiton of Kew and James Edward Smith of the Linnean Society, he based himself in Charleston, South Carolina   and began sending back plants to Britain. Unfortunately when he got back to London in 1785 he found that his consignments had met the same fate as those of most other early plant hunters – most plants had arrived  dead, and those that survived were the least interesting and thus less saleable. Undeterred he sailed again for Charleston and travelled around  the Carolinas and Georgia in 1786 and 1787  this time during during the Cherokee Wars. 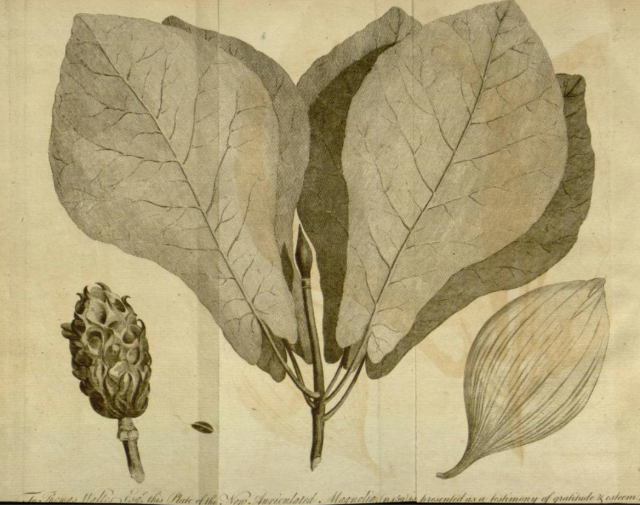 The only illustration in Flora Carolina 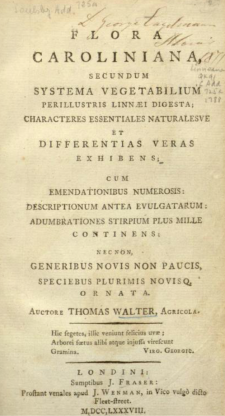 Whilst there Fraser met a local amateur botanist Thomas Walter who had just written Flora Caroliniana, the  first American regional flora based  on Linnaeus’s binomial system.  It’s in Latin and, apart from the engraving of the magnolia above, unillustrated.  Fraser took Walter’s manuscript with him on his return in 1788 and  arranged for its publication in London.   The trip was profitable in plant terms too. The Hortus Kewensis recorded 16 new plants as having been introduced by Fraser in 1786, and five more in 1787.

It was France next, on the very eve of the French Revolution. 1789 saw him sell these new American discoveries to rich plant collectors including the Duc d’Orleans for his new garden just outside Paris, and to scientific botanists such as Charles L’Heritier. And it was in Paris that  he met Thomas Jefferson, the future American president, for the first time. 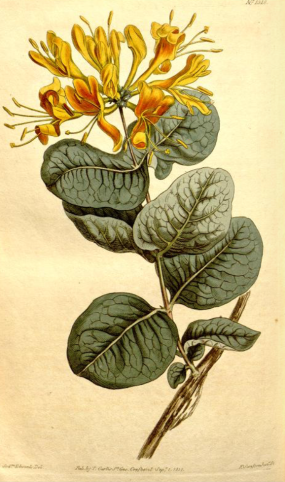 There were two more successful trips to the Carolinas in 1790 and 1791, exploring and plant hunting with his younger brother James. Together they then leased land near Charleston to set up a nursery to grow material for export back to Europe.   After a further trip in 1796, the brothers took on  406 more acres on nearby Johns Island to propagate even more stock for shipping back to Britain.

On the strength of all this  Fraser opened  his American Nursery  on the Kings Road near Sloane Square, which extended to 12 acres. 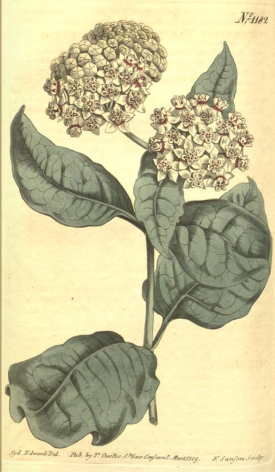 As Robert Hogg his biographer noted in 1852: “During this period he traversed the Allegheny Mountains, penetrated into several of the Indian settlements, and exposed himself to an amount of privation and hardship as few other men could have undergone. And here, be it remembered, the America of seventy years ago was not the America of to-day; much of the soil that is now traversed by the locomotive, and gladdened by the joyful sound of the gospel and civilisation, was then the hunting field of the Indian, and the scene of many a bloody conflict. Where now the ploughshare and the pruning hook pursue their quiet ennobling course, the scalping-knife and tomahawk savagely reigned. Few can realize what a traveller like John Fraser had then to undergo.” One of the plants that Fraser bought back from Petersburg from Curtis’s Botanical Magazine, 1801

So John Fraser was clearly adventurous – and now he set out on a different kind of adventure: selling American plants to Russia. He visited St Petersburg and persuaded Catherine the Great  to buy a collection of American plants from him, at the same time buying Russian plants, including  the Tartarian cherry, to sell in Britain. On a second trip her son and successor Paul I  gave him the title of Botanical Collector to the Tsar, and Fraser thought he’d convinced Paul to commission him to return to America to collect yet more plants for the imperial gardens.  So in 1799 it was back to Charleston, taking his elder son, John junior,  with him on a trip that took them through  Virginia, Kentucky, and Tennessee. They even visited Monticello at the invitation of Thomas Jefferson. Fraser apparently giving Jefferson an idea for an improvements in sewers which TJ wrote up [Papers of Thomas Jefferson 1800] 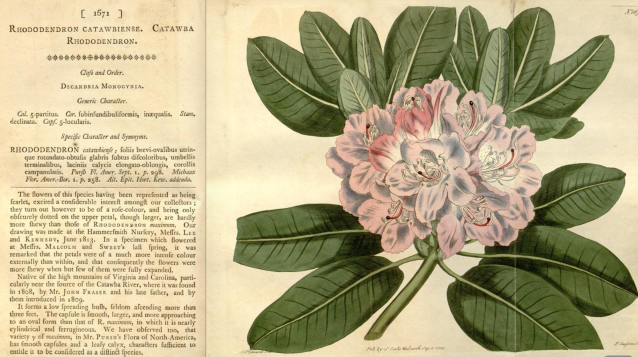 One of the highlights of this expedition was discovery of  Rhododendron catawbiense which is an important parent of a large number of frost-hardy hybrids. Robert Hogg got John junior to tell him about that moment:  ““I shall never forget so long as I live the day we discovered that plant. We had been for a long time travelling among the mountains, and one morning we were ascending to the summit of the Great Roa, in the midst of a fog so dense that we could not see further than a yard before us. As we reached the top the fog began to clear away, and the sun to shine out brightly. The first object that attracted our eye, growing among the long grass, was a large quantity of Rhododendron Catawbiense in full bloom. There was no other plant there but itself and the grass, and the scene was beautiful. The size of the plants varied from seedlings to about two feet in height, the habit being evidently diminutive, from the high altitude at which they grew. We supplied ourselves with living plants, which were transmitted to England, all of which grew, and were sold for five guineas each.”

As a result Robert Hogg said of  Fraser: “he was the man to whom Europe is indebted for the magnificent hybrid Rhododendrons that of late years have caused the “American grounds” of the Old World to heave with a perfect ocean of beauty and grandeur.” 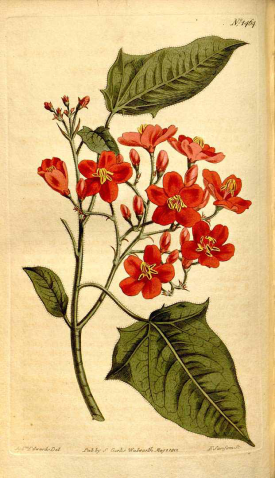 The next stage of their journey was to take them to the Spanish colony of Cuba. Given that Spain and Britain were still at war they had to travel on American passports [how easy would that be today?] En route they were shipwrecked and  according to Hogg “For six days they, with sixteen of the crew, endured the greatest privations until picked up by a Spanish boat and conveyed to land.”  When they finally reached the island their luck turned. They  encountered   the explorers Alexander von Humboldt and Aimé Bonpland who were on their own exhausting trans-American expedition.  Humboldt told the Spanish Governor that the Frasers were English plant hunters – not necessarily the act of a friend, but the Governor replied “though my country is at war with England she is not at war with the labours of these man.” The Frasers were left to do their own thing, eventually  returning to England taking with them some of Humboldt’s collection which was bound for … and  “a goodly collection of rarities,” including  Jatropha pandurifolia.” 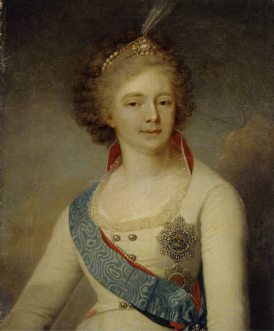 On the way home they heard of the death of the Tsar but assumed that his commission would still hold good. Unfortunately it turned out that the idea of the Russian crown paying for his trip was a bit of an illusion.  The new Tsar  Alexander I was not really interested in plants and certainly had no intention of paying for the expedition Fraser had just undertaken. However the Dowager Empress Maria Feodorovna, Paul I’s widow intervened. She apparently gave him a diamond ring  and he was finally paid 6000 roubles for his American plants in 1803. She also bought more  specimens for the gardens of the Gatchina and Pavlovsk Palaces .

In 1807, both father and son once again sailed for North America and the Caribbean, eventually returning home from Cuba with, according to Loudon’s Arboreticum et Fruiticum  a silvery-leafed tropical palm said to have been   Corypha miraguama, which was used locally for making hats.   [This is probably Coccothrinax miraguama. I can’t find any other reference to a Corypha coming from Cuba as they appear to be endemic to south east Asia.]   Once in London again he used this discovery to start up a hat-weaving business with his sister, an enterprise  that gained the support of Queen Charlotte. Although  it was successful for a time things  ultimately failed probably for want of supplies of the leaves. [Sadly nor can I  find any illustrations of what these hats might have looked like!]

By now there were also financial and horticultural problems  with the  Charleston nurseries and it led to a lawsuit with John suing his brother for non-payment of debts, but up until 1810 at least the nursery continued to ship large numbers of rhododendrons, magnolias, oaks and other  plants to Britain. 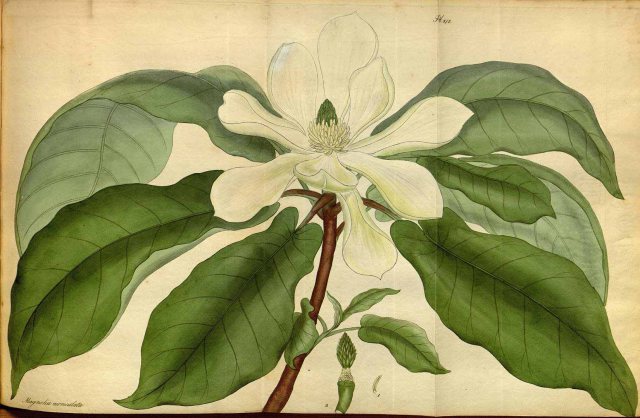 It was to be Fraser’s last trans-Atlantic trip because unfortunately he was thrown by his horse outside Charleston  and sustained  injuries  from which he never recovered, although he did manage to get home again,  where he discovered his American nursery  was in a  neglected state because of his absence.  It was taken over by his two sons John Junior and his brother James Thomas Fraser who continued to run it after their father died in April 1811 aged 60. Fraser was interred in the old burial-grounds of St Luke’s, Chelsea.

In his career Fraser introduced about 220 distinct species of plants from the Americas to Europe and beyond, including  “Andromeda floribunda, and all that is interesting in Azaleas, Kalmias, Andromedas, Vacciniums, Magnolias, Menziesia globularis and ferruginea, many species of Oaks, Pinus, Phlox, Oenothera”, and, according to Robert Hogg’s article  “a list too long to enumerate here”. These were  “All collected under hardships and privations, crowned with less remuneration, and with more hopes disappointed, than any collector either before or since has ever experienced.” After his father’s death John junior soon returned to America where he continued his own botanic expeditions until 1817 when he returned to Britain and set up  the Hermitage Nursery at Ramsgate.  This was regarded as rather second rate by Loudon.   The American Nursery was then run by James Thomas  although it seems to have finally closed in 1827.

I’ll leave the last word to Robert Hogg: “Thus lived and thus died, John Fraser, F.L.S., one of the most zealous and disinterested, and at the same time most successful, botanical collectors which this country has ever had.” 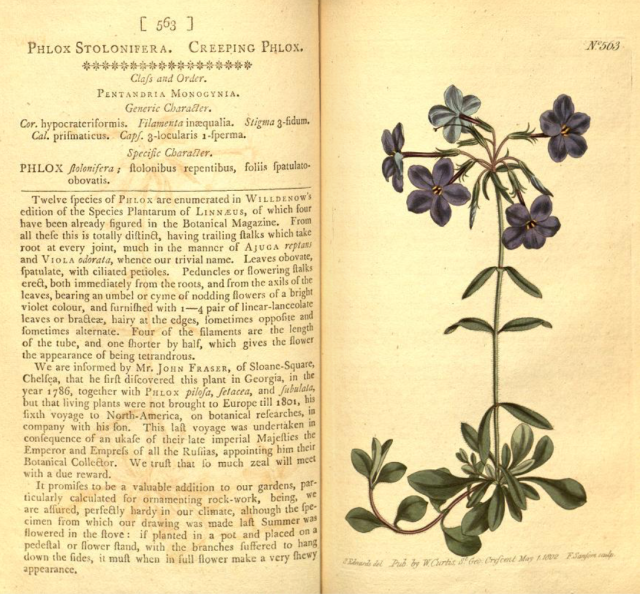 1 Response to The indefatigable John Fraser and his American Nursery