The Art of Perfection…

We’re coming to the end of  the season for that most English of events the  autumn flower show. [There’s even been one recently in Ambridge!]  But  have you ever entered any of your fruit, veg, flowers or plants for one?  Or visited a  show and seen the rosettes and certificates awarded and wondered why a  particular exhibit won while others which looked equally good to you were seemingly rejected out of hand? 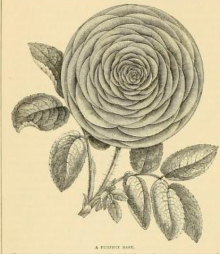 A Perfect Rose [according to George Glenny at least]

People have always made choices in the plants they grow.  Do they look good? Taste good? Produce something useful? Smell nice? Grow well?  But as agriculture, and slightly later gardening, became more professional and commercial so the choices were made increasingly by agricultural breeders, nurserymen and horticulturists. They were, and still are, primarily concerned with resistance to disease, shelf-life, vigour in growth, adaptability to differing conditions. All those things are, largely, quantifiable. What they can’t quantify are the more subjective areas of flavour, and the whole realm of aesthetics: and that’s a wholly different can of worms. 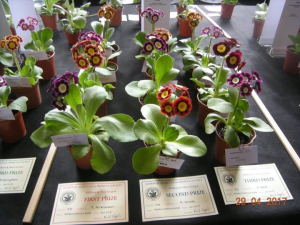 That hasn’t stopped people endlessly trying to do so. In the days before we understood, and then used the sexual nature of plant reproductions to hybridise plants scientifically, early modern flower lovers carefully selected plants from open-pollinated specimens.  They looked for a high degree of variability. They looked for showiness, colour and size. They looked for plants that were easy to grow and that could be propagated vegetatively.

There weren’t many plant groups that met all these requirements and the 8 that did became known as florists flowers: auriculas, polyanthus, ranunculus, anemones, tulips, hyacinths, pinks and carnations.  Florists Societies showed off their creation in staged exhibitions with prizes awarded, and of course prestige was also gained for successful growers.

Pamplin’s Charles the Twelfth,  a near perfect Dahlia? from Glenny’s Florist and Amateur Annual 1840

Gradually the list of suitable plants grew. The early 19thc saw the addition of dahlias and pansies to the list, followed by roses, camellias, fuchsias, pelargoniums, calceolaria and even hollyhocks later in the century.

With the spread of an interest in gardening to a wider audience so also the idea of the flower show/exhibition took a hold on the public imagination. By the 1820s they had become a popular form of “entertainment” and as  the recent post on George Glenny showed they attracted the aristocracy and even royalty. But who were the judges and how did they  judge what was the best? 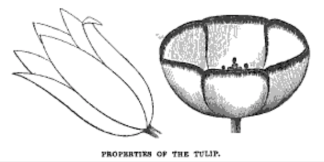 The unacceptable and acceptable shape of tulips from George Glenny’s The Gardener and Practical Florist: vol. 1, 1843

Attempts to lay down the desirable qualities of particular flowers began early. The Rev George Harbin chaplain at Longleat wrote in 1716 about tulips that “those with pointed petals at top… are not now esteemed. Those whose petals are broad and round at top are most valued…” Philip Miller of Chelsea Physic Garden joined in: the upper part of a tulip should be “rounded and not pointed, and the stripes should be small and regular, arising quite from the bottom.” There were similar injunctions being laid down for the other florists flowers too.  But who decided?

from The Florist’s Directory [2nd edition]

from the Florist’s Directory

The first comprehensive attempt to define what makes a desirable flower in each group seems to have been made by James Maddock in 1792 in The Florist’s Directory .

As you’d expect, John Claudius Loudon  also had his say too. His Encyclopedia of Gardening  outlined the criteria for each of the florists flowers as part of his overall portrait of the plant which included its botanical details and how to cultivate and propagate it.

Criteria for Tulips, from Loudon’s Encyclopedia 1826

Criteria for Ranunculus, from Loudon’s Encyclopedia, 1826

Compilation of acceptable pansy flowers from Glenny’s The Gardener and Parctical Florist, 1843

Now enter George Glenny.  Previous posts have shown he was an irascible and self-opinionated man but that he was also a good gardener and an enthusiastic exhibitor of plants. He frequently disagreed  with judges at shows  believing them to be ignorant or biased as well as largely unaccountable for their decisions. But who he asked “is to decide the taste by which the floral world is to be governed?”  There was “no means of trying a flower as there is a horse, which you may race; a pigeon that you may fly …or a bullock you may weigh.”  As you might have guessed the answer to the question of “who?” was simple: none other than Glenny himself. He  embarked on a radical project to create a set of  unambiguous rules that would be clear to everyone – not least the would-be competitors and judges at flower shows. They were to apply to all flowers entered for shows, not just the traditional 8 florists flowers.

In a series of articles in his Horticultural Journal between 1832-35, and in The Gardener and Practical Florist in 1843, Glenny set out his own precise criteria.   Collated and re-issued separately as The Standard of Perfection for the Properties of Flowers and Plants in 1847, they were later  enlarged and reprinted in the Gardener’s Magazine in the early 1850s.  George’s criteria added up collectively to the guiding principles of aesthetic perfection. Of course they were simply based on Glenny’s own taste and were just as arbitrary as all previous attempts, but at least they were consistently so.

Glenny admits that he was not the first to think of this idea, but before you think he’s being generous to his predecessors, he launches into an attack on Maddock’s “Criterion” which was  “a lame affair; founded on no principle, assimilated to no understandable object, and not half-defined.”  “There was nothing in the Criterion of a good flower that could be acted upon.”

Loudon’s attempts fare slightly better: They were the best to date but in his opening “Address to the Reader” Glenny spends 7 pages going through Loudon’s work explaining the errors and imprecision and he what had done to correct the situation.

from The Standard of Perfection, 1847

from The Standards of Plants

But Loudon got off lightly. The second part of the Address to Readers is an attack on those who, after the initial publication of Glenny’s standards, had ‘stolen’ his ideas and claimed them as their own. Although it’s quite amusing to read what’s most interesting about the piece is, of course, that it shows that Glenny’s underlying premise – that flowers could and should be judged against  a standardized benchmark – had been accepted by almost everyone. 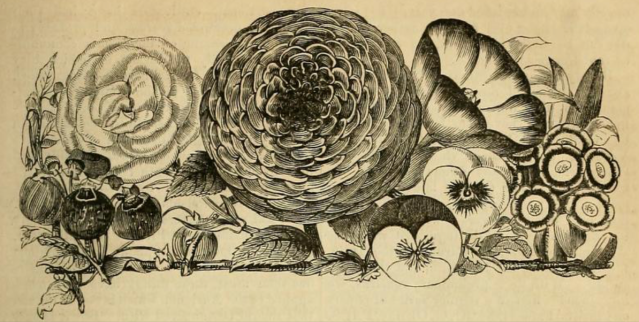 An array of florist’s flowers showing how quickly Glenny’s ideas were adopted. From Annals of Horticulture 1847

So lets look at George’s standards and what they meant.

Firstly he insisted on  geometric purity. In flowers that meant, almost regardless of plant family or natural habit, they should have  a circular outline or where appropriate be spherical or proportionately so. He argued that “the circle exposes the largest surface, and is therefore the richest; all divisions in flowers detract from their richness; therefore, whatever it is attainable I have insisted on its being the most perfect”

These pansies might have won first prize at Winchelsea but would George  have approved?

He admits that not all flowers are circular. For example  “the Cineraria, a flower forming a complete star; and the pansy which had its 5 divisions so palpable as to form a heart…; the geranium with its deep indentures; the Verbena with its notched bars.” But tough on them.  They “were  among the most notorious of the subjects that had to be bought to a circle.”   And why? Simply “to answer my notions of beauty.”

There was one sole exception:  the Moss Rose which is “the only flower that is really rich in its confusion, or that is not the less elegant for the total absence of all uniformity and order.” One has to ask in that case why he condemned the peony, which most people would probably agree is quite similar in its blowsy overblown way. It  was absolutely NOT acceptable, being  “a confused mass of petals and florets”  which although it may be “tolerated as a garden plant  as a show plant never.”

This was because “the principal qualities of show flowers are symmetry and variety, and the peony has neither”. In fact “the most beautiful specimen that could be conceived would be so inferior to the Rose or the dahlia that it would be idle to treat it as any more than a plant for out-of-doors.”

Extract from the criteria for Amaryllis

Geometric purity extended to petals as well where all edges should be perfectly smooth.  Serrated or jagged ones were quite simply unacceptable.This meant that narcissus, for example, were not to have pointed petals, and what would he have made of fringed tulips? Even Amaryllis had to follow these rules: “pointed segments are ugly and offensive, so also are narrow ones.” 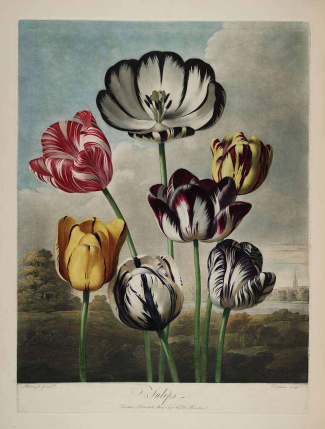 Tulips [all probably unacceptable!] from Robert Thornton’s Temple of Flora, (1807)

By now you must be getting the picture. regularity applied to markings and patterns as well. There was no place for blotches, smudges or irregular forms. Thus,  flaming on tulips had to be identical on all six petals, none of the colour should reach to the edge of the flower, or the bottom of the cup. and everything had to be “perfectly uniform”. 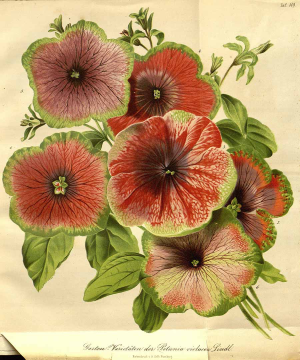 Petunia integrifolia – I don’t think George would have approved! from Gartenflora , (1855)

Colours were to be “bright” “clear” and “distinct” or even  “brilliant” – nothing muddy or confused in any way. Hollyhocks for example needed “dense colour instead of watery…the more bright and novel the most desirable.” If the flower was bi-coloured then the contrast between the two must not be too close or too strong.  And in plants where there were clearly separate sections within a flower, such as the corolla and sepals of a fuchsia there had to be a contrast: it was not acceptable for them both to be the same colour.   Even in describing colour though George was capable of venom. The Petunia, only introduced in 1823, was a case in point. Its “colour or shade was matter of taste, but such is the fancy of people in these days  that a new ugly colour would be thought more of than an old handsome one.”

You might think that Glenny’s particular aesthetic choices wouldn’t have much impact. After all he was just one voice, albeit a strident one. But you’d be wrong. He was more than just one of the most widely read garden writers he also organized and judged flower shows and was a regular well-known competitor.  As George Gessert points out in his book Green Light: Towards an Art of Evolution [2010] he managed to influence the directions taken by plant hybridisers and nurserymen.  His ideas fitted the Victorian age’s concept of progress, by suggesting that the raw materials of nature could be tamed and directed and led to dramatic alterations in the appearances of several flower families.  Of course not everyone agreed, but as we’ll see  in another post soon it was Glenny’s ideas which have held sway for more well over a century and a half… 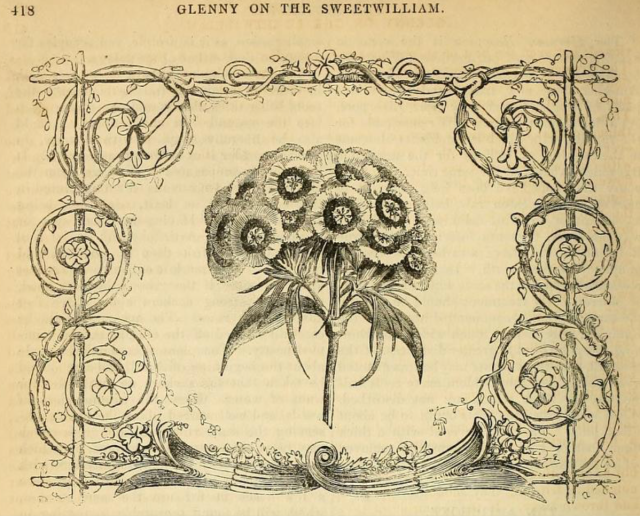 Glenny on the Sweet William, from Annals of Horticulture, 1847

1 Response to The Art of Perfection…