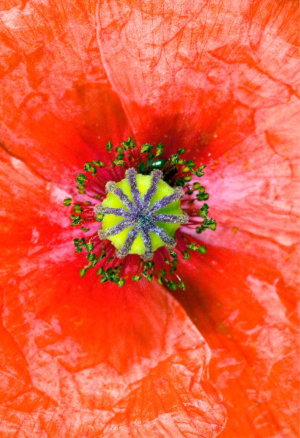 The annual red poppy is both fragile and fleeting,  and both robust and  enduring. Its vibrant coloured flowers  have been symbols of remembrance and rebirth throughout history.  So when I was asked if I was going to write a post about poppies for the centenary of the end of the Great War I thought I ought to, despite the fact that every other blog writer about history or  gardens will probably be doing so too and I would be hard pressed for something new to say and that wasn’t heavily overladen with the imagery of Flanders.

And how do you trace the history of a weed? because for all their ubiquitous imagery field poppies [Papaver rhoeas] are actually not that common as garden flowers, with surprisingly few cultivars, and almost none at all until the late 19thc.   They are also easily confused in evidential terms  with opium poppies [Papaver somniferum], which are equally beautiful but with a completely different set of emblematic and symbolic meanings.

The annual field poppy is a pioneer plant and highly successful weed.  Indeed so successful has it been, and so widespread has it become, that no-one can actually work out for certain where it originated although it was probably the eastern Mediterranean.

It loves disturbed ground so thrives in regularly cultivated land particularly when fields were hand or horse ploughed and harvested. It was a common sight everywhere until the industrialization of agriculture, and more particularly our increasing reliance on chemical herbicides began to wipe it out. Now it is a less and less frequent sight on farmland, and much more likely to be seen on those patches of “wild flower mix” sown to prove that farmers still have some green credentials.

The whole plant is an advert for survival techniques. Its bright red flowers appear in large numbers and are designed to attract interest from pollinators. It produces  15-20,000 tiny seeds per plant, well protected in hard capsules,  that can be viable for long periods even when buried deep underground. That of course explains its prevalence in the farmland of Flanders where the shelling disturbed huge areas of ground and brought many generations of  seeds to the surface.

I know too from personal experience how effective the poppies survival strategy can be. Our garden was once 5 acres of overgrown derelict farmland. Once we started clearing, huge stretches of the former farmyard and field fringes turned red early one summer, and despite our hard-hearted and ruthless mowing, poppies continue to appear every time ground is disturbed. 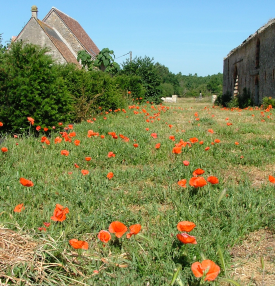 Poppy seeds are light and easily dispersed which explains why  we now have colonies living unreachably high up on barn walls, in cracks in the concrete parking indeed anywhere they can establish a foothold. They love our gravel garden too, and have become our most prevalent unplanned guest plant.

Its name was given to it by Carl Linnaeus in Species Plantarum in 1753, and derives from Papaver, also ‘pappa’,  the Latin for food or milk and rhoeas means red in Greek.  It shares membership of the wider Papaver family, with opium poppies, oriental poppies, horned poppies, Welsh and Iceland poppies, and then more distantly with meconopsis,  Romneya and greater celandine amongst between 70 and 100 species depending on which botany book you read.  They share many features but notably flowers that are very short-lived, perhaps only open for a day, with delicate petals around  a central showy boss of stamens. The flowers also tend to open rather strangely with the petals emerging “crumpled  from the calyx”  as Sandra Knapp nicely puts it “as if they had been stuffed like dirty clothes into a bucket.”  [Potted History p.238] 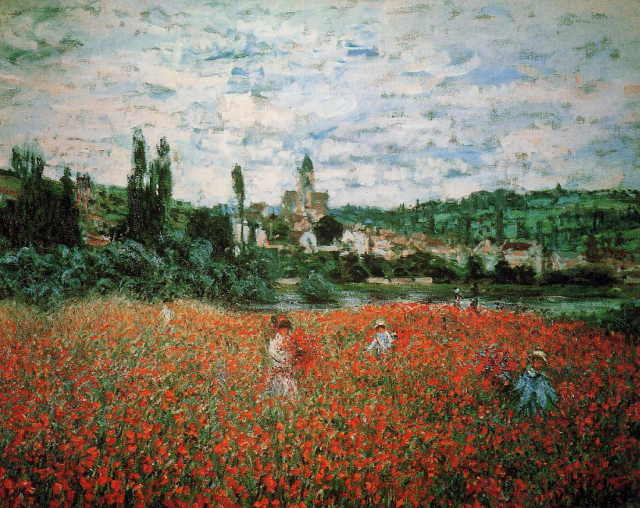 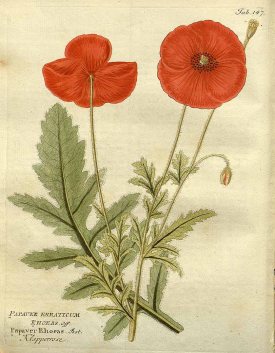 Perhaps because of their agricultural connections the field poppy had no real place in British gardens until “discovered” by the Victorians and it is only then, from around 1880 onwards,  perhaps with a change in aesthetic sensibilities  that they come into their own horticulturally for the first time. They also suddenly begin to appeal to artists like Monet and Van Gogh amongst many others.

I’ve found three very different people who might be at least partially behind this sudden spurt of interest, and  all of whom became interested in poppies at roughly the same time. 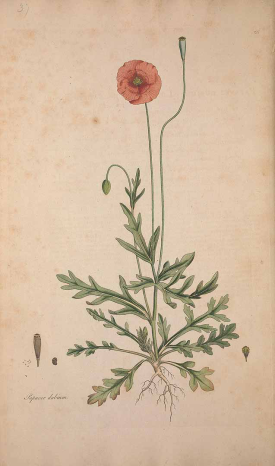 The first was John Ruskin who held up the poppy as an object of extraordinary beauty in its own right. In 1882 he wrote a  botanical memoir, Proserpina: A Study of Wayside Flowers  in which he uses wild flowers to  outline his approach to aesthetics  and science. He suggests  a preference for the classification and taxonomy of plants not based on scientific Linnaean principles  but on aesthetic ones instead.

Ruskin certainly understood the botany and “engineering” of plants but thought  these were merely functional qualities and secondary to their beauty which was  a divinely imposed attribute, given them simply to inspire and elevate humans beings. And he wrote about this with remarkably evocative language although with sadly few illustrations. [Follow this link more on Ruskin’s aesthetic taxonomy]

He notes picking “a small red poppy…an intensely simple, intensely floral flower. All silk and flame: a scarlet cup, perfect-edged all round, seen among the wild grass far away, like a burning coal fallen from Heaven’s altars.” This is from his use of Papaver rhoeas  as an exemplar in a chapter on flowers. He then goes on to  a whole chapter about the poppy itself  in which he attempts to answer the question “what is a poppy” by going critically through a botany text book written by John Lindley.

Papaver rhoeas from the
Grandes Heures of Anne of Brittany, by Jean Bourdichon

Whatever one thinks of his theories there is no doubt that Ruskin can write. Can you think of a better evocation of a poppy than this? “We usually think of the poppy as a coarse flower; but it is the most transparent and delicate of all the blossoms of the field … the poppy is painted glass; it never glows so brightly as when the sun shines through it. Wherever it is seen—against the light or with the light—always, it is a flame, and warms the wind like a blown ruby.‘

Or how about this: “Gather a green poppy bud, just when it shows the scarlet line at its side; break it open and unpack the poppy. The whole flower is there complete in size and colour – its stamens full grown, but all packed so closely that the fine silk of the petals is crushed into a million shapeless wrinkles. When the flower opens it seems  a deliverance from torture: the two imprisoning green leaves are shaken to the ground; the aggrieved corolla smooths itself in the sun and comforts itself as it can; but remains visibly crushed and hurt to the end of its days.”

frame from the time lapse video

There is a very short time-lapse video by Neil Bromhall to visually echo Ruskin’s  words on YouTube, and several others on a simialr theme can  be found there too. 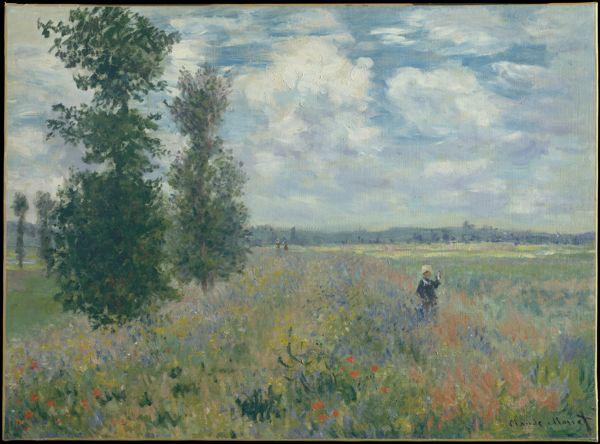 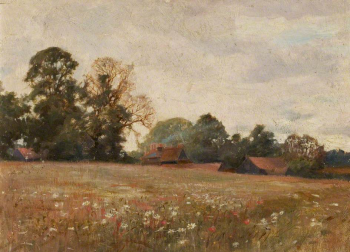 Scott was a theatre critic and journalist and in 1883 wrote an article in the Daily Telegraph about a visit to the north Norfolk coast which was then becoming a popular tourist destination largely because of the opening of a new railway line.  He had arrived in the newly opened station at Cromer and set off walking along the cliff path: “It is difficult to convey an idea of the silence of the fields through which I passed, or the beauty of the prospect that surrounded me – a blue sky without a  cloud across it; a sea sparkling under a haze of heat; wild flowers in profusion in the fields around me; poppies predominating everywhere…”

As in all good stories Scott then met someone and seems to have fallen in love, returning to the area every year, immortalizing it in articles, verse and prose as Poppyland. The result  was that the picture he painted of a peaceful and beautiful rural hideaway attracted more and more visitors and, as he himself ruefully admitted, very soon began to turn Poppyland into Bungalowland.

Unfortunately his book is not available in a digital version but the story was televised as Poppyland (1985) by John Madden, starring Alan Howard. 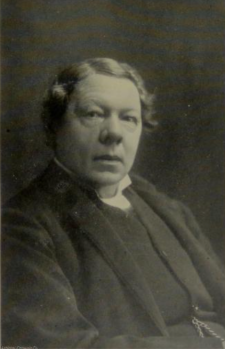 And while Scott was rhapsodizing about Norfolk, in the leafy suburbs of south London a vicar was rhapsodizing about poppies, or rather about one particular poppy he had found in his garden.  This was William Wilks, the vicar of Shirley,  in Surrey [now in the London Borough of Croydon] who wrote: “I noticed in a waste corner of my garden abutting on the fields a patch of the common wild field poppy, one solitary flower of which had a very narrow edge of white.” Luckily for horticultural posterity Wilks was not merely a clergyman but a botanist  and secretary of the Royal Horticultural Society. 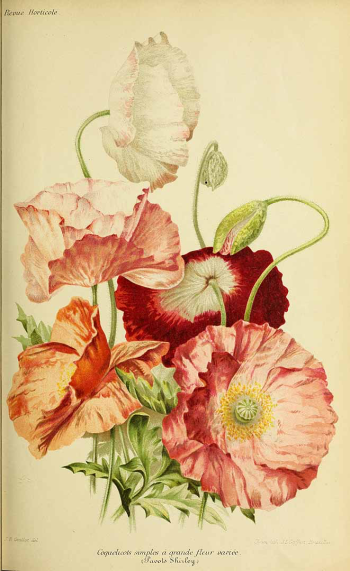 He marked that solitary flower,  and the following year raised 200 plants from its seeds. From those he selected ruthlessly, removing all the plain red reversions:  “I am about my flowers between three and four o’clock in the morning, so as to pull up and trample on the bad ones before the bees have a chance of conveying pollen to others.”

Gradually over the next 20 years  Wilks created a strain with a wide range of soft colours, but mainly with a subtly silvery tinge and without dark blotches at their base. The best description I’ve seen is that they  look a bit like tissue paper left out in the rain.

Finally, in 1901,  Wilks put on a sensational  display what became known as Shirley poppies  at the Royal Horticultural Show of 1901. Instantly popular he declined to sell the seed preferring to hand them out for free so the resultant plants would give “joy and delight to the poorest as well as the richest”.

This gives the impression that Papaver rhoeas only comes in the “traditional” single red form and that Wilks was the first to notice and then begin a selection process. In fact there are illustrations of many shades of red, pink and white as well as double versions in much earlier texts, notably paintings by Georg Ehret in  Weinmann’s Phytanthoza iconographia,  1745.

These were described as Papaver erraticum presumably implying either that they were “natural” variations or that someone has been following a careful programme of selection at a much earlier date than Wilks.  However I  have not been able to trace anything more definite about this   so if anyone knows more please get in touch.

Wilks died in 1912 but his mantle was taken up by another great horticulturist, the artist  Cedric Morris  who continued the selection process, this time  aiming for  a  taller strain, which is now widely available commercially under such names as “Angels Choir”. Further selection has led to double and  semi-double  forms, as well as  picotee  [ie with  a different coloured edge  to the rest of the flower.] 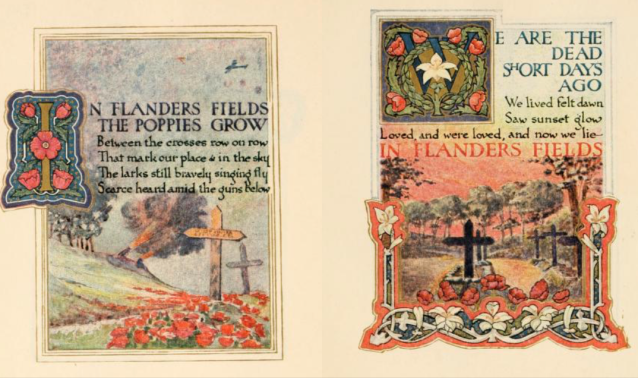 It was only three years after Wilk’s death that the poppy in its common scarlet form rather than the clergyman’s pastel hybrids took on its  current more sombre meaning.  It began in 1915 with a poem  ‘In Flanders Fields’, written by  Lt-Col John McCrae in which    the flowering of the poppies  created the vision of  a  ‘sea of blood’ . It was Sir Arthur Hill, then Director of Kew who summed up what was to become the public consensus:  “Nowhere, I imagine, can the magnitude of the struggle be better appreciated than in this peaceful poppy-covered battlefield hallowed by its many scattered crosses”.

And to this day, a century later, that imagery continues to evoke the twin feelings of  profound grief and heart-warming hope and still brings a tear to the eye. 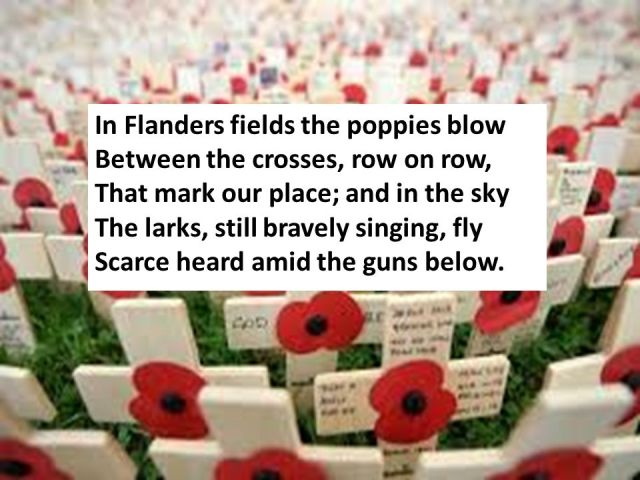 1 Response to The Poppy