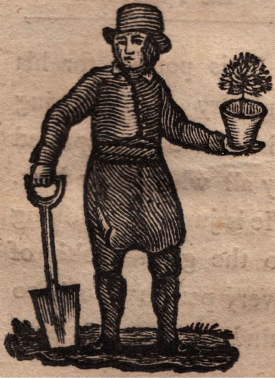 Listening to the stallholders in  Columbia Road Flower Market  crying their wares the other day struck a sad note. It’s the last gasp of a centuries old sales technique used round  much of the rest of the world, reminding us that most goods and services used to be sold  by hawkers walking the streets. These days it’s really  only markets where traders try to catch the attention of potential buyers like this.

The cries themselves, often simple rhymes or short bursts of song, are the equivalent of advertising jingles performed to a live audience.  They are first documented in England by John Lydgate, the 14thc poet,  although they do not appear in print form in England until the early 17thc when they and the traders who used them became popular subjects for a new genre of print.   It was the beginning of a tradition that evolved from prints into children’s books and then collections for adults and were even printed on cigarette cards, and which  lasted well into the 20thc.

Images  like  that of  “John Honeysuckle, the industrious gardener” give an insight into the way gardeners and gardening were perceived. He is described as  “with a myrtle in his hand, the produce of his garden. He is justly celebrated for his beautiful bowpots and nosegays all round the country.”   Other images show the range of food stuffs and flowers available, and the ways in which they were sold.

From March’s New Cries of London. Image from Spitalfields Life

The inspiration for this post came from the blog Spitalfields Life whose author has carried out a huge amount of research into street cries, many of which he has uncovered in the library of the Bishopsgate Institute in London.  I am indebted to him for permission to draw on his research for this week’s piece.

Printed street cries are generally extremely small in scale, making them cheap to collect, and while it’s thought that they were mainly bought by the middling sort their low price  gave them a wider appeal too. The diarist, Samuel Pepys, is well known as a collector of books and serious prints, but he also collected  popular images of hawkers and street vendors. His library contained  a file labelled “Cryes consisting of Several Setts thereof, Antient & Moderne: with the differ Stiles us’d therein by the Cryers where he had 3 different sets of the Cries of London, together with two sets of Cries from Bologna, and others from Paris and Rome.  His collection is the only surviving contemporary visual record of the street life of these places. 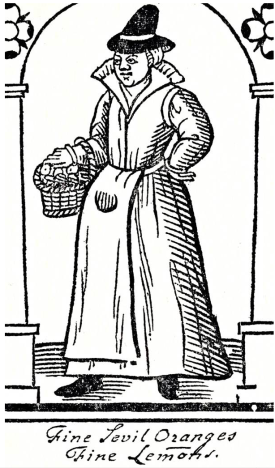 What these street cries also reflect, in retrospect, is the increase in availability of goods, and how, by the last part of the 16thc  things  like oranges and lemons which were once  luxury imports had became much more commonplace, and moved from expensive shops in the Royal Exchange to markets with open stalls and then to itinerant street traders.

An artichoke seller, from what Pepys described as  “A later Sett, in Wood – with the Words also then in use.” from Spitalfields Life

By the mid-18thc Dr Johnson was able to write ” The attention of a new comer is generally first struck by the multiplicity of cries that stun him in the streets, and the variety of merchandize and manufactures which the shopkeepers expose on every hand…[On the trades of London, The Adventurer, 27th June 1753] 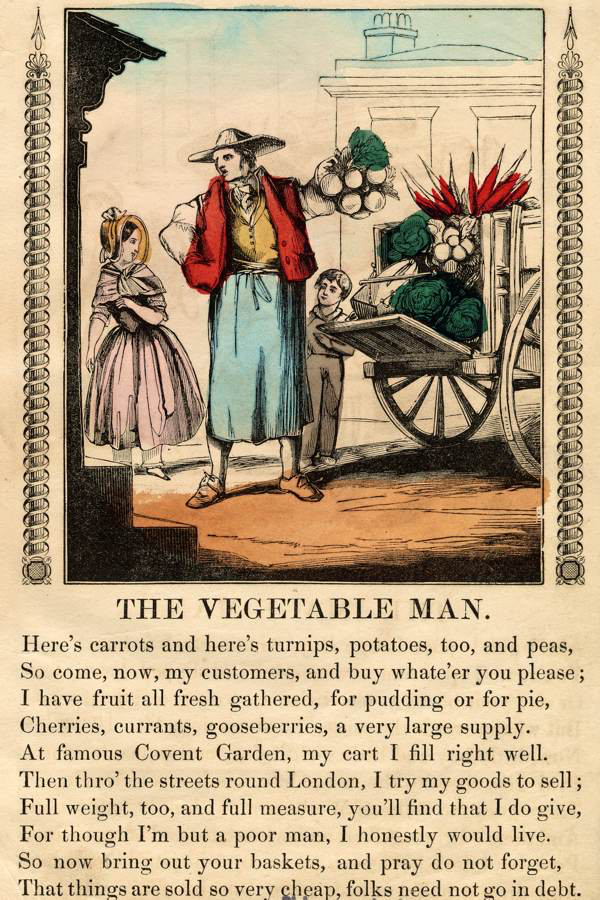 The Vegetable Man  1852, from Spitalfields Life 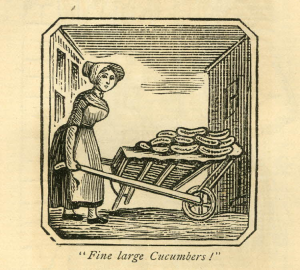 Nowhere is this more obvious than in the choice of fruit and vegetables that could be bought by ordinary Londoners. Common vegetables like onions, carrots and turnips were joined by cucumbers,  and all sorts of greens with peas being especially popular

New potatoes from Craig & Philips, The Itinerant Traders of London in their Ordinary Costume, 1804, British Library

Potatoes too, especially new ones, were hawked on the streets  and there are often revealing notes included in the accompanying text :  “About the latter end of June and July, they become sufficiently plentiful to be cried at a tolerable rate in the streets. They are sold wholesale in markets by the bushel and retail by the pound. Three halfpence or a penny per pound is the average price from a barrow.” 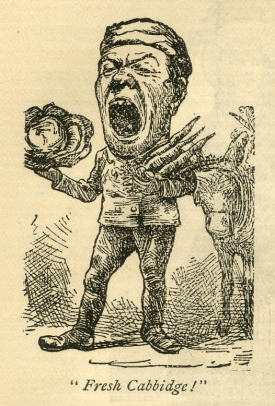 from ‘Old London Street Cries, and the cries of to-day’, by Andrew W Tuer, 1885, British Museum

Ripe Speragus from The Cryes of the City of London Drawne after the Life, after Marcellus Laroon, 1688, British Museum

Asparagus became affordable, although as Laroon shows clearly this was not the soft juicy young shoots but rather overgrown and presumably stringy ones, probably the leftovers from those available to the better-off.

Whilst strawberries and cherries were clearly seasonally popular, and are the most commonly recorded, oranges and lemon are regularly shown too.

from The New Cries Of London, 1803, from Spitalfields Life 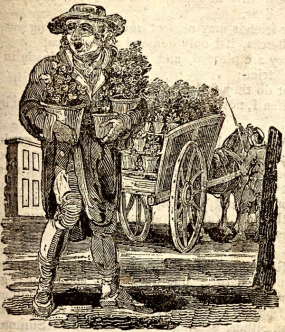 Images of working gardeners selling plants are much less common, and tend to be much later in period than those of street hawkers selling basic foodstuffs. Its obviously difficult to know how “accurate” the images of the plants they’re selling – in the case above – tulips in bloom, an orange tree, what looks like ivy on a small trellis and a miniature conifer. But taken collectively they do give an indication of the range of plants available for both indoors and outdoors. 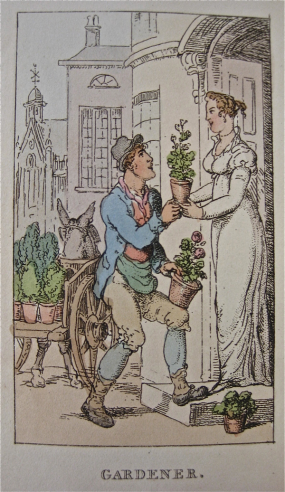 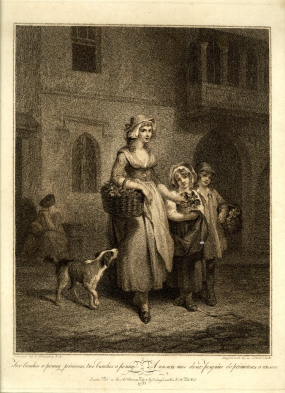 What is perhaps surprising is that street hawkers were also able to sell one of the ultimate non-essential goods – cut flowers. There was clearly a limited range at the cheap end of the market, and while we know that nurserymen were growing roses and other ornamentals  for the cut-flower market what appears in the images on street cries are almost only those that could be picked in the hedgerows round about.

While some such as lavender or rosemary have several uses, such as perfuming clothes or masking less pleasant smells others, such as primroses or sweetbriar, must have been bought simply because they were pretty or would cheer up the buyer. 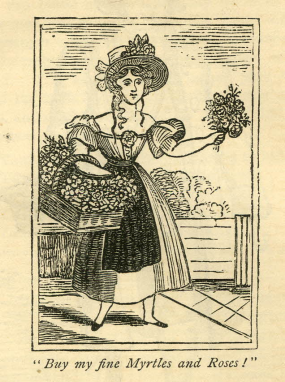 A different sort of “useless” item is shown in the image below. Whereas most of the cries depict generic types, a few [mainly later in time] are known to have depicted particular  individuals. 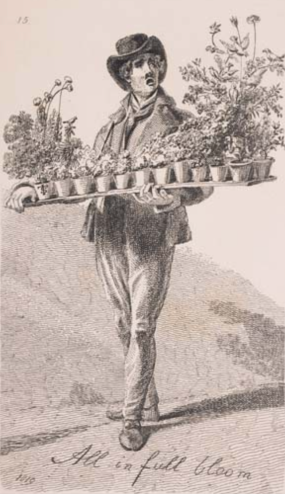 A print from an extra-illustrated volume of ‘The Cries of London’ by J.T. Smith, 1819
Museum of London

The Museum of London has uncovered the background of the plant seller shown in this print. Anthony Antonini was an Italian immigrant, from Lucca, one of many driven abroad by  poor  economic conditions  after the Napoleonic Wars.  He is shown with a tray of potted plants and flowers. But, unlike John Honeysuckle’s plants Antonini’s are all artificial, with wax birds perched amongst them.  As I showed in an earlier post about artificial flowers his goods would almost certainly have been made at home by his family, including his children. 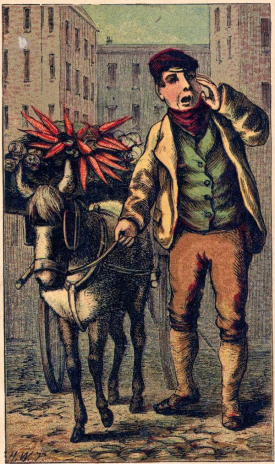 The Costermonger from London Characters by HW Petherick. Image from Spitalfields Life

Another known character, depicted in several books, was “The Turk, whose portrait is accurately given in this plate.”  He  “has sold Rhubarb in the streets of the metropolis during many years. He constantly appears in his turban, trousers and mustachios and deals in no other article. As his drug has been found to be of the most genuine quality, the sale affords him a comfortable livelihood.” 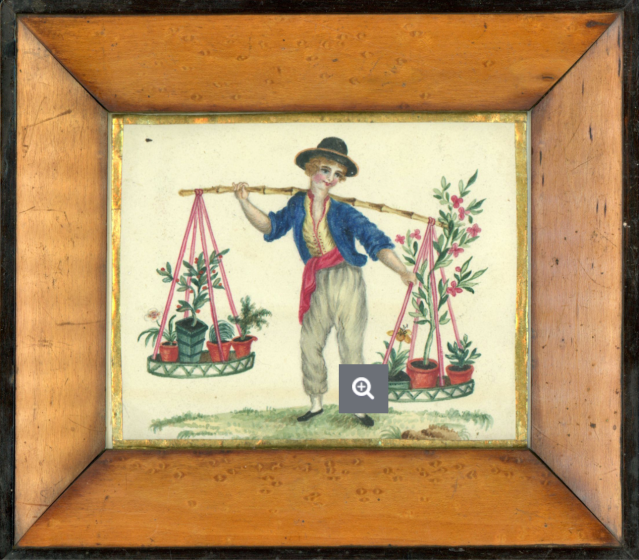 “Plants for your Garden!”

Cries vary in quality of imagery and detail, but although those things may change  the poses and costumes remain much the same. What changes more is the underlying attitude of the artists to those they were portraying. In the early cries the hawkers and sellers are usually portrayed as respectable working people, reasonably dressed with little sign of drudgery or hard work.  Thereafter there is a division between images that show something of the hard reality of street life which have the feel of being based on real people, and those that sentimentalize or even romanticize it.

Of course the sort of traders depicted in these  Cries have gradually disappeared from our streets. Their numbers declined after the First World war and although some like flower girls survived until comparatively recently it’s clear that in 20thc cries there was a large element of nostalgia in the images. Of course the reality was probably markedly different with these workers having extremely hard and difficult lives with little romance or picturesqueness about it.

As I said earlier The inspiration for this post came from the blog Spitalfields Life.   The author has also written a book on London Cries.

To end, I’m taking the liberty of copying a paragraph he wrote in his piece on the Street Cries in London Melodies in 2011, which portray these workers as they really were, because it sums up the dichotomy between harsh reality and nostalgia really well:

“Commonly in the popular prints illustrating Cries of London, the peddlers are sentimentalised, portrayed with cheerful faces and rosy cheeks, ever jaunty as they ply their honest trades. These lively wood engravings could not be more different. These people look filthy, with bad skin and teeth, dressed in ragged clothes, either skinny as cadavers or fat as thieves, and with hands as scrawny as rats’ claws. You can almost smell their bad breath and sweaty unwashed bodies, pushing themselves up against you in the crowd to make a hard sell. These Cries of London are never going to be illustrated on a tea caddy or tin of  Yardley Talcum Powder and they don’t give a toss. They are a rough bunch with ready fists, that you would not wish to encounter in a narrow byway on a dark night, yet they are survivors who know the lore of the streets and how to turn a shilling as easily as a groat. With unrivalled spirit, savage humour, profane vocabulary and a rapacious appetite, they are the most human of all the Cries of London I have come across.”

from James Bishop’s The New Cries of LOndon, c.1844