At the end of last year I wrote  about the travel journals of John Byng, 5th Viscount Torrington. His diaries are, unlike most 18thc published writing, quite informal in style , probably because he  had no intention of putting his thoughts into print.  Whereas most of his contemporaries write of  the almost constant wars that form the background to this period or the political situation of the days, Byng  virtually  ignores such mundane matters.

John Byng by Ozias Humphry, 1796 from The Torrington Diaries

Instead he concentrates on  the English countryside and its people, enjoying himself as an interested observer of little details.  He describes the buildings, gardens  and landscapes he visited, and the people of all kinds  he met, and not always in the most flattering way.   Take for example his visits on what he called “A Tour in the Midlands” in 1789….

The castle seen over the lake © Copyright Tim Heaton 2006

He travelled from London with a small group of friends and had reached Bedford on 1st June  where  “My morning Walk … quickly taken”, he encountered “the Duke of Ancaster who was on his Road to Grimsthorpe [his country seat in LIncolnshire] who pressed much my coming there—or with any Friends on my Tour ‘who might take Batchelors Fare.’ ”

The Bertie Arms on the main gates © Copyright Michael Garlick 2014

This was Brownlow Bertie, the 5th and last Duke, who Byng recorded as liking ” the country, and is hastening to enjoy it; as some men do.—But no women; for my Lady Dss, and her Daughter Lady M. Stay in town for more Galas: She, my Lady Dss (like other Ladies), fancys that London is the only Place for a Girl to get a Husband in, and her daughter is of the same opinion”

After “my Friend his Grace the Duke had departed”, Byng rides to visit various churches and manor houses before returning to Bedford where he discovers “an old Building (probably monastic) … at the bottom of the late George Inn Yard;—It is now under Repair: The Masons told me it was A Romish Building. The font must have been removed from Caldwell Abbey, or The Friary; It serves now to receive The Rain Water, in the Swan Inn Yard.” The antiquarian spirit of Willaim Stukeley obviously lived on in Byng because he adds     “Did I live in this Neighbourhood, I should strive to purchase it, and then place it in my Garden, (or amidst my Ruins) with the best Inscription I could give.”

Chicksands Priory from Select Illustrations Historical and Topographical of Bedfordshire
by the Rev. I.D. Parry, 1827

He was not alone in thinking this way because just a couple of days later  he visits  nearby Chicksands Priory the home of General Sir George Osborne.  Apart from a distinguished military career Osborne was also an antiquarian and collector and “amongst many Improvements, Decorates his Grounds with Rustic, and other characteristical Buildings; Safeguards from wet weather and Retreats from heat, and ever enticing forward the Walker and Rider.”

A Fishing Hut at Chicksands, by Byng from Diaries vol.4

These included ” the Invention of Old Chapelries etc.—as if belonging to The Priory. For in a pleasant wood He has erected by a Pond Side a well constructed heap of Ruins (call’d St. Mary’s Chapel where is an Inscription That here Lie the Bones of many a Monk who closed his days at the Adjacent Priory of Chicksands: (Sir George’s Son with much good humour has joined the c to the l, and made a new reading dosed his days.) 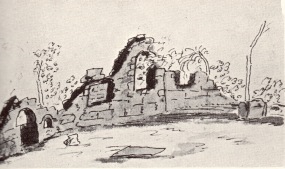 The ” well constructed heap of ruins” at Chicksands, by Byng from Diaries vol.4

Chicksands, from Watts View of the Seats of the Nobility and Gentry, 1779

The priory itself had been domesticated and Byng had ” a good opportunity of seeing The Old Religious House (Sir G. with his company being walk’d forth) which is, probably, one of the most perfect now

In the Hop Ground at Chicksands, by Byng from Diaries vol.4

existing, for great Part of the Cloisters are entire, and being glazed, afford a most pleasant, and gloomy Passage to The Library. In these windows, and on the Cloister Walls are some painted Glass, Monumental Stones, Brasses etc., Outside ” this Rural Seat commanding a very gay view of The Country, and of The River.” with a ” Drive over the beautiful back grounds.” 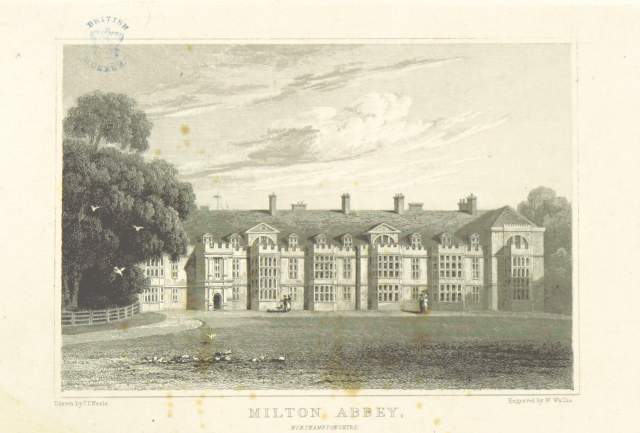 Milton Abbey, nr Peterborough from Neale’s Views of the Seats of Noblemen and Gentlemen, 1818

The 5th June saw him arrive at “Lord Fitzwilliams Park at Milton… not a place I believe, much Visited. Ignoring the advice of his innkeeper who, like most hosts also acted as an early tourist information office, who told him “that it was not worth going to; but that all the World went to see Burleigh ” he went anyway and found that Milton  “luckily Escapes an overun.”  It was he thought “a noble, Venerable Pile, and wish’d much to enter it, but [we] were refused.” That decision was unlikely to have been Earl’s Fitzwilliam’s since  he had recently  inherited Wentworth Woodhouse and moved his principal seat there.   Nothing daunted  they inspected what they could from the outside even though they  “cou’d only peep thro’ the windows into The Lower Rooms, which appeared very comfortable, and Elegantly furnish’d: but not in the Old Taste! The Library, particularly, seem’d to be a most desirable apartment, and there must be some fine Rooms up Stairs.”

But the refusal put him in a bad mood and the grounds get sharp criticism: “There is no View from The House. The Water is a Stagnate Serpentine below the Garden, where an ugly Green-House is now Building.” However Byng had arrived just a few months later he might well have met Humphry Repton who was called in to advise on alterations to the parkland at Milton, and a Red Book was created in 1791 which survives in private hands.

Byng concludes his description of Milton declaiming that “A Refusal of the Sight of any House known commonly to be seen, is very unpolite, and cruel upon The Tourist.” 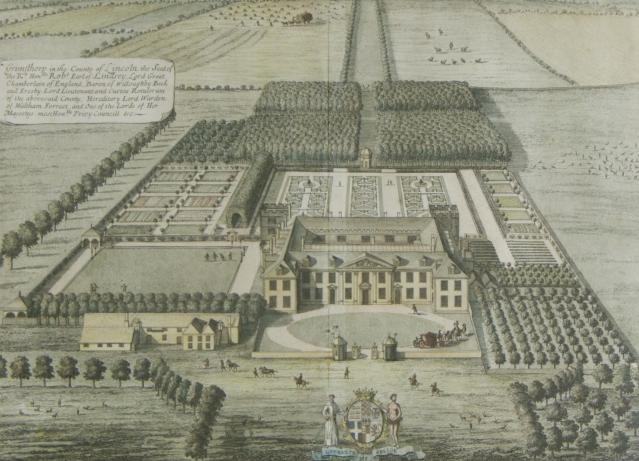 Eventually Byng’s party reach Lincolnshire to take up the Duke’s invitation, but the tone of the comments gets even sharper as they  “enter’d Grimsthorp Park; (by a shabby Gate, and without any Lodge!). Thro’ Grimsthorpe Park is a long ill-kept Road that leads thro’ the wooded Part to the open Ground—the View of the water, and of The House opposite. Here I rode forward to Enquire after his Grace, and was soon introduced to Him, my Horse being led into an Out-House; ‘My Lord, my two Friends are with me—we wish to see your Grace’s House and Place;—as for our Company, Do with us as you please, To dinner, or not, as is most agreeable’—’My Dr. Sir, will they take a glass of wine, and see the House? My Cook is in town, and I am unprepared.’

Byng should have realised from that that the invitation issued on the road a week earlier had  been made out of a sense of boredom or maybe noblesse oblige rather than genuine desire.  But he couldn’t say the Duke neglected his duties as a guide because “then his Grace obliged us to see every part, every Closet, of this wretched uninhabited House.”

“The New Front Hall were built by Sir J. Vanburgh42 in all his clumsy Taste; The other Parts, very old, and outside Chimney’d, were all clean, as his Grace observed; (how shou’d they be otherwise?)….

Of Pictures there are many bad ones of men and Horses; but of which his Grace is a bad Nomenclator: one of Dogs and Bears, He call’d a Hondicotter, instead of Hondius, and He brag’d of a Vandyke, King C.’s Family, which is a most miserable copy.  Here are some faded Pictures by Sir J. Reynolds—of no Value to any one; and the original Paintings by Hogarth, of the 4 Times of the day, which wou’d be highly Valued by some. We were obliged to be drag’d into every Bed Room; and his Grace desired me to fix on that I shou’d chuse to Sleep in when I came there (to which I inwardly replied—’You need not fear that I shall ever come again.’)

It was soon clear there was going to be no offer of dinner: ” My civility was strained to a degree, I was very hungry, and without hopes of food; and to be obliged, too, to see his forlorn cold kitchen, and his Vanburgh, tasteless, devotionless Chapel!”

The grounds got equally short shrift. “In front of The Mansion, is a most extensive Lawn on both sides of the ugly water, upon and near which is neither Tree nor Shrub… There is no Pleasure Ground, or a Rose to be found! ” 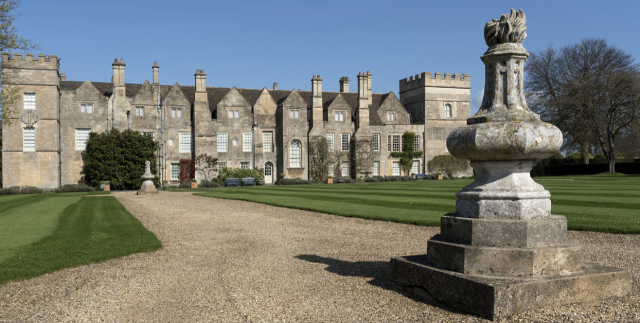 And there are plenty of digs at the Duke’s lack of interest: “To me it appears Strange That any Man, of any Fortune, can Permit his Grounds to lay in disgrace. A Barrell of Paint is of easy Purchase, and of easy use to ornament and preserve Gates and doors: and altho’ hasty and grand Embellishments weaken Fortunes, and being foolishly begun, as sillily End; yet why not Employ 2 or 4 men who might under your Eye, Plant and Repair?”

“For even such assistance would in a few years, highly adorn even a great Domain: Whereas those who from Idleness and a pretence of Expence, will neither Employ themselves, or one single Labourer, whose work they must direct, are supinely content to see The Nettles spring up around them; shatter’d Gates that will neither open or Shut, and Hedges whose Gaps are stop’d by Hurdles.”

“By self-experience I know how easy it is from a bundle of shrubs, and an apronful of Roots, with a Spade, a dibble and a Trowel, to beautify a Small Garden. But I will not allow even the Plea of Poverty to be an excuse for filth, and neglect; When a cripple of an Alms-House can frequently produce his small Chamber garnish’d with Prints, and his alotment of Garden flourishing with Roses.”

Avenue to the south front,

“I said to his Grace—’Where is the Kitchen Garden?’ ‘Oh, that we will Walk to see.’—But, now, after a two Hours Survey of the House, my civility began to Halt; (for I had already seen the Kitchen; and what cou’d be in the Kitchen Garden!) So I would not go there: Why Then Bring forth the Horses, said his Grace (from some Hovel). But first you shall see the Dairy; which was as mean, and as ugly, as could be!”

The lake from the castle terrace, from Flickr by Terry Campbell 2015

“Upon mounting my Cold Horse, and bowing away, I felt as disatisfied, as peevish, and as hungry as might be: Of Servants I saw none, so saved Tipping; and only one Curaty kind of Visitor, of whom The Duke took so little Notice, that He seem’d glad to ride away with us.—We talk’d not—I was sulky, and looking out for a Public-House with a civil Landlord, for of private ones I felt sick.”

Poor Grimsthorpe deserves better so there’ll be a post about it as soon as I have time to visit again and write it!