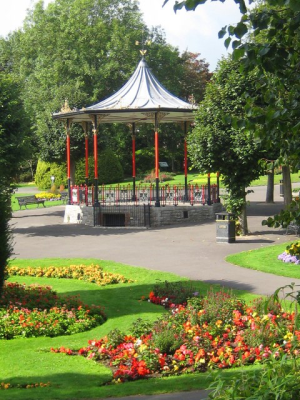 A couple of weeks ago I began  looking at the work of  William Goldring, the prolific landscape and garden designer who died one hundred years ago this year. In England, he is supposedly associated with work on more than 700 projects, many of them public parks and open spaces or the grounds of institutions, but even in his own day he was often overlooked.

His obituary in Gardener’s Chronicle  starts its appreciation by saying “we gather” these are some of the places he worked, before listing just a handful of public sites.

detail from a postcard of Thompson Park, Cardiff, c.1910

Today’s post is going to look at a few of these public park commissions. 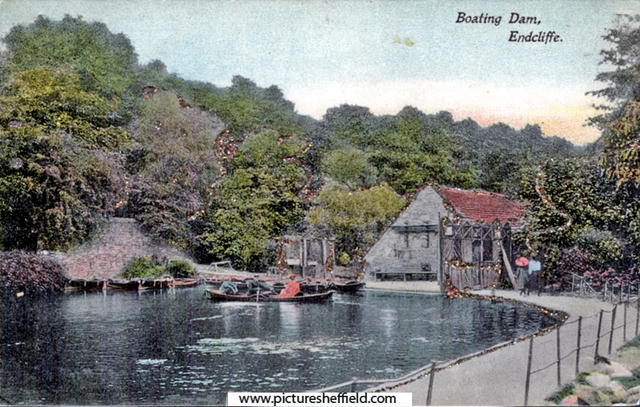 An early major landscape project was in the countryside  to the south west of Sheffield. Here the steep fall of the local streams had allowed Sheffield to develop  the most extensive user of water-power in Britain from the 18thc onwards with over 100 water mills and associated dams built, mainly for industrial use in the steel and cutlery trades.  By the late 19th/early 20th century these uses were winding down and industry moving elsewhere, but fortunately this coincided with early moves in conservation and saving large tracts of land for recreational use. 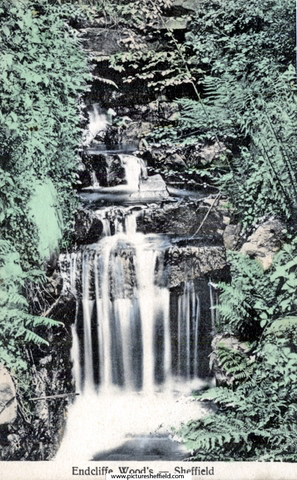 The earliest was  at Endcliffe Wood in the Porter Brook valley, which was already home to a well-established walk and and ‘one of the most perfect cascades that a lover of nature could wish to see’, in the ‘small glen’ at Porter Clough (Pawson & Brailsford Guide to Sheffield 1862).  However it was also being marred by sewage from new housing developments nearby.  The land and buildings were acquired in 1885 and the machinery taken out and auctioned. 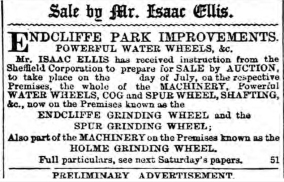 A new sewer was constructed  whilst Goldring turned the water behind the dam into a boating lake. 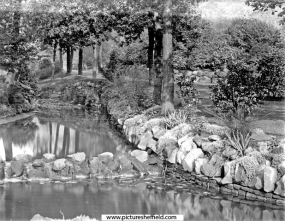 Gravelled paths were laid out through the woods, as well as shrubberies and flower beds.  Rustic bridges and stepping stones crossed the brook which was stocked with trout. 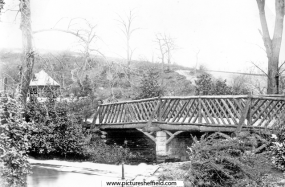 As far as I can see, he didn’t take up one suggestion made in the local paper, about what should be in the park instead giving it   “inner city” park facilities such as a drinking fountain and refreshment room  as well as a keepers lodge and bandstand where local military bands were encouraged to play “in the long summer evenings”. [Sheffield Daily Telegraph18 January 1888 ] 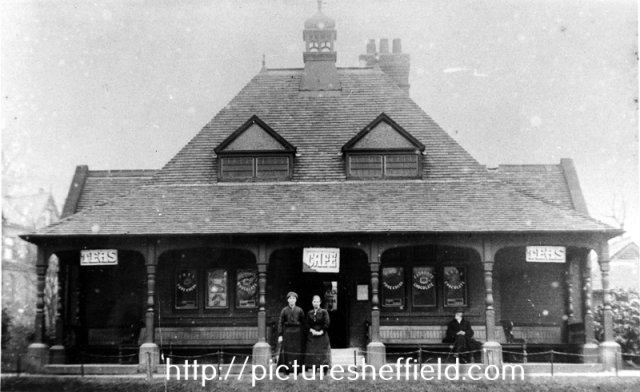 Goldring converted other  mill dams for use for  skating and waterfowl, and one for bathing. This was not universally popular and complaints soon came in about “serious annoyance to respectable people passing through the woods”. [Sheffield Weekly Telegraph –  20 August 1887]. However the general response was extremely positive and the  new park officially opened to commemorate Queen Victoria’s Golden Jubilee.

Gradually more land was acquired until in 1937 the whole of the present linear ‘Porter Valley Parklands’ system was established.  It is now listed as Grade 2. 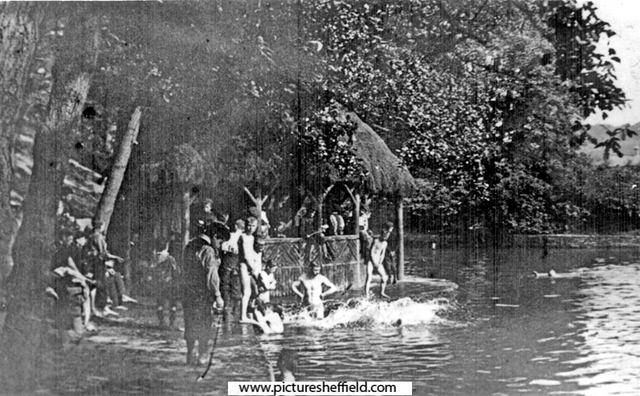 For further information see: “Water Power on the Sheffield Rivers” edited by David Crossley and  the lengthy entry on Historic England’s register   which also lists a wide range of references. There are a large number of photographs on the Sheffield City Council’s Picture Sheffield webpages. 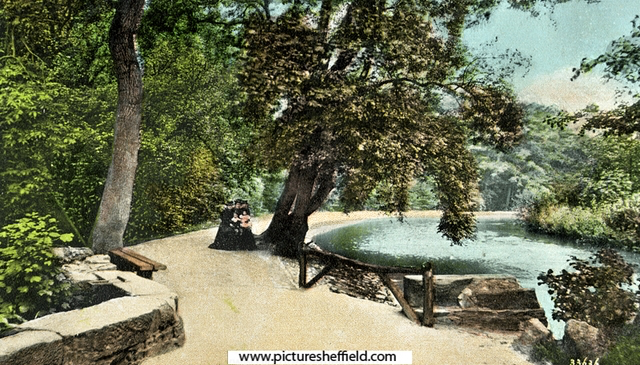 In 1895 he received another important commission this time from Alderman Gregory, the mayor of Dorchester, Dorset  for a new garden.  The site was then just outside the town, with one part formerly an old cattle market and fairground and the other a nursery ground. The town’s council had just purchased the land for £5200 to lay out ‘pleasure gardens for the health and recreation of the inhabitants’.

The nursery owner, a Mr Harris, was then employed as the Head gardener for the new park.  His house is still there and the Historic England Register entry [admittedly last amended in 2002],  says that traces of a painted notice advertising the nursery survive on one wall.

It was not an ideal site so Goldring disguised its long narrow shape by altering the ground levels, creating hillocks and a dell, and used the resultant  slopes to hide the network of paths around and across the site.  Goldring’s initial scheme was simple, with lots of grass  and had, reported Gardeners Chronicle,  “a pleasing  natural appearance”.

View north west of the shrubberies towards Cornwall Road, from the south entrance on West Walks circa 1896-99 (Dorset County Museum Collection)

Goldring  also incorporated the two rows of  existing large trees that ran along one boundary and which were part of a network of shady walks that ran round the town’s outskirts. He bulked these up, planting more trees and shrubs around the park’s edge to shut out the view of the neighbouring roads.  The former  nurseries glasshouses were left in place and presumably served to grow the bedding plants that were needed for the new flower beds. Space was left for tennis courts and a croquet lawn.

Borough Gardens opened in 1896 although they were not finished, and  soon afterwards a series of park buildings and features were added by local philanthropists. The  Gregory Memorial Fountain, named after the former 5 times mayor, the driving force behind the park,  was installed in the Dell in 1898.

It’s a 16ft tall elaborate marble structure, now Grade 2 listed with three shallow basins supported by lions and birds, and standing on   a square pedestal, which itself  rests on a rocky base set in yet another marble basin.

A bandstand was also put up in 1898 to celebrate Queen Victoia’s Diamond Jubilee. It’s an octagonal stone drum with cast iron columns and a  a leaded pagoda roof. It cost the donor £200 and like the cast iron benches that surround it it is Grade 2 listed. 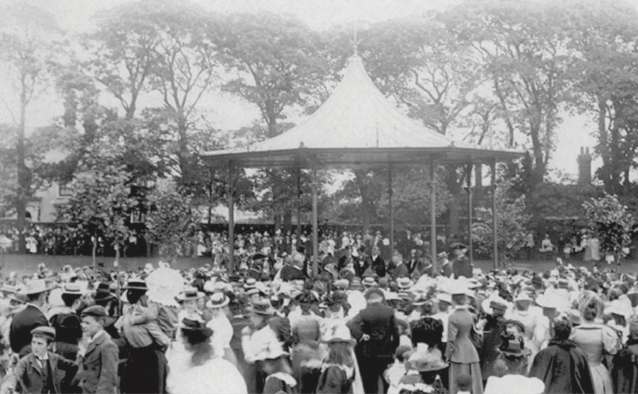 In 1899 an obelisk was erected in memory of men of the 1st Battalion Dorset Regiment who had died on the Tirah campaign on the North West Frontier of India in 1897-8.  The other major addition,  in 1905, was  a splendid cast-iron clock tower. This too is octagonal although the clock section is square and topped with an onion dome and weathervane. 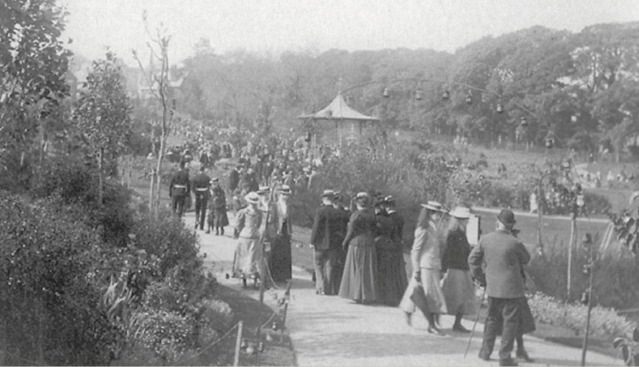 By late October 1898 “WS” in Gardener’s Chronicle was waxing lyrical about the efforts of Mr Harris to provide seasonal colour. It must have been a grand display in every flower bed:  ivy-leaved, bronze leaved and zonal pelargoniums, lobelia, American Mammoth verbena, American Giant petunias, ageratum, calceolaria, whilst cannas and lobelia cardinalis were “very noticeable”.  All of these had, apparently, withstood the summer drought very well while elsewhere herbaceous plants such as phlox, kniphofia, heleniums, spirea and  helianthus were “flowering profusely”.

Roses still carried blooms while it was clear to WS  that the masses of rhododendrons, conifers  and shrubs “afforded diversity of form and aspect.”  This is hardly surprising since Goldring’ specialism as a horticulturist and writer were woody shrubs.

In the early 20thc, many of the old nursery greenhouses were taken down and a new bowling green laid out while the croquet lawn  was turned into tennis courts. 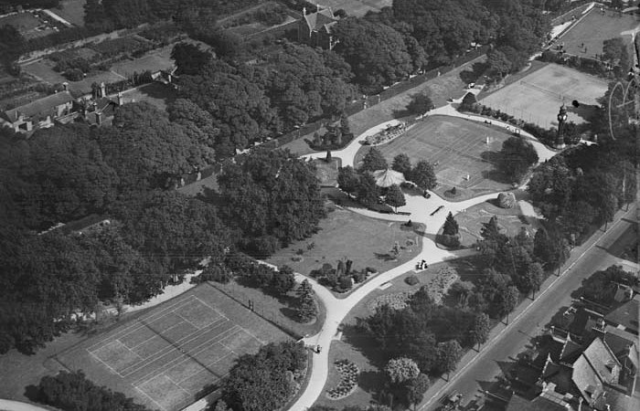 As was often the way the second half of the twentieth century saw years of neglect, under-investment and then vandalism  but luckily the town council stepped in in 1997 to try to reverse the process of decline.  A management plan was drawn up by Colvin and Moggridge in 2000 and the gardens were given listed status by  English Heritage as Grade 2 on the Register of Parks and Gardens. This presumably helped lead to a grant of nearly £1 million from the  Heritage Lottery Fund towards the £1.4 million cost of the restoration and enhancement of the gardens  in the spirit of Goldring’s original design.   The newly restored gardens were officially re-opened in 2007.

The plan of the restored gardens

The only other major park project that I can find much about  is Thompson’s Park in Cardiff, although there is almost nothing even in the local newspapers about Goldring’s design or his role and importance. 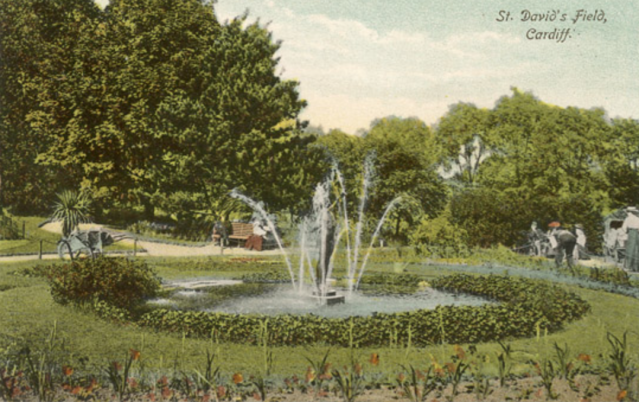 The statue of Joyance by Sir William Goscombe John

At the same time he was working at Dorchester he was also commissioned to carry out improvement work at one of Cardiff’s oldest public open spaces, then known as Sir David’s Field. It commands magnificent views over Cardiff and was opened to the public in 1891 by its owner Charles Thompson.  He had, according to the local paper laid it out with “flowerbeds, nicely kept walks along which there are plenty of seats” and with a recreation ground in  the centre which was extensively patronized  in the season by juvenile cricketers.” [South Wales Echo, 19 October 1891]

Unfortunately 18 months later he was forced to close it again because of persistent littering by “a group of people who ought to know better”. Although the gardener had intervened to ask them to clear up the mess “he had been treated with insolence” and it had become necessary to have one of the gardening team “almost constantly employed in removing litter from the field.” How, Thompson asked “could he expect the street gamins and the poorer people who came into the park to observe …the necessary rules” if “apparently respectable people” ignored them? The closure was luckily only temporary and the park re-opened after he installed bins around the park. [Western Mail, 10 April 1893]  Another problem arose because the roads leading to the fields were not paved and  were often seas of mud. The city council eventually got round to fixing that, just before Goldring began work. 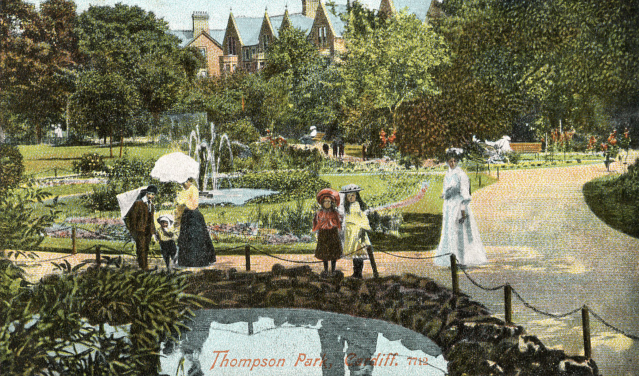 Unfortunately I can’t find any trace of what Goldring actually did. The very informative Cardiff Parks website which is run independently of the City Council by past and present members of the Parks Department has many pages devoted to each of the city’s parks, including Thompson’s  but even it merely states that “In 1895 the garden was enlarged and formally laid out by the landscape gardener William Goldring” before going to outline its later history including the fact that in 1911, Mr Thompson gave the park, by then popularly named after him,  to Cardiff Corporation.

Information about Goldring’s other parks commissions is, to put it politely, hard to find. According to the Gardeners’ Chronicle obituary Goldring also worked in Eastbourne, Weymouth, Norwich and Reading, although  it was a much larger number of places than that. None of these are mentioned on the Parks and Gardens UK database or the Historic England Register. I’ve also checked the websites of the relevant local authorities and there is  virtually nothing on the history of any of their parks and obviously no mention of Goldring.

What this says very clearly to me is how little we actually know, and how little many people in authority seem to care, about our historic parks and their heritage. With austerity eating away at what little budget remains, and with more and more depending on volunteers for maintenance and equally scarce Lottery Funding for restoration projects, time seems to be running out.  As most of you will know the Gardens Trust has been campaigning to protect public parks for many years. We published the report ‘Uncertain Prospects  and were  one of the founding organisations of the Parks Charter in 2018. This calls on government to protect our parks because of the serious long-term damage caused by budget cuts and lack of investment. So far it has fallen on deaf ears.

This all contrasts with the ethos of Goldring’s day when both local authorities and local philanthropists recognized the benefits of parks and other green spaces to the health and well-being of their communities, and laid out the very places which our generation is threatening to neglect to the point of destruction. We’ve come a long way since Goldring’s death in 1919 sadly not much of it, as far as public parks are concerned, for the better. 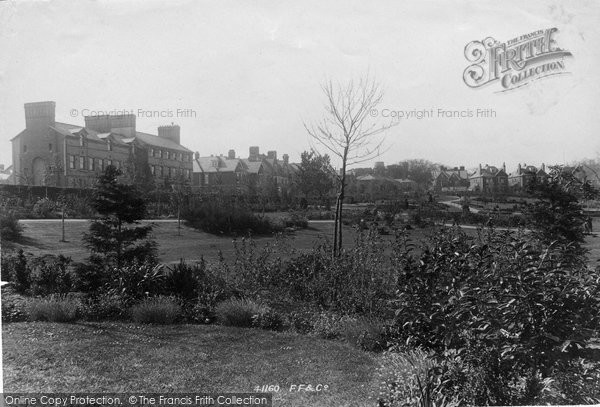 2 Responses to Goldring and Public Parks