“Her Highness”, the Giraffe given to Charles X by the Viceroy of Egypt, by Nicolas Huet the Younger (1827)

I looked in the last post at the early history of Paris’s principal botanic garden, the former royal garden or the Jardin du Roi. Today’s is about what happened there between the French Revolution and today.

It’s a good story involving the first giraffe in France which became an instant celebrity and fashion icon, as well as some pioneering architecture, and shows how post-Revolution science in all its branches, including botany and horticulture became central to French culture.

This was summed up by Joseph Lakanal,  during a debate in the revolutionary National Convention  in 1793, who asked if “the Tree of Liberty is the only one not to be naturalised at the Jardin des Plantes” before going on to  declare that “of all the monuments raised by the munificence of nations to the glory of natural science, none has deserved the attention of legislators better than the Jardin des Plantes”.

And  don’t forget if you’re self-isolating you dont have to wait for  Saturday mornings  to read something new about garden history. There are another 322 posts covering all sorts of  topics  for you to read over breakfast  [or at any other time!] just check out what’s available under Topics on the top menu bar – or take pot luck and choose a month from the archive column on the right and see what pops up!

The menagerie and natural history cabinet

A two volume guide to the Gardens from 1803

In August 1790,  as the revolution was really getting underway,  the new National Assembly passed a decree asking the professors and demonstrators at the gardens to come up with ideas for the garden’s future.  They proposed  a new National Museum covering every aspect of Natural History.  As the revolution gave way to the Terror such a minor matter was quickly overlooked but eventually in June 1793  following the debate I mentioned in the opening paragraphs, their wish was granted.  A revolutionary decree set up the  new institution which was to include the former  royal gardens, the former Natural History Cabinet and a menagerie. 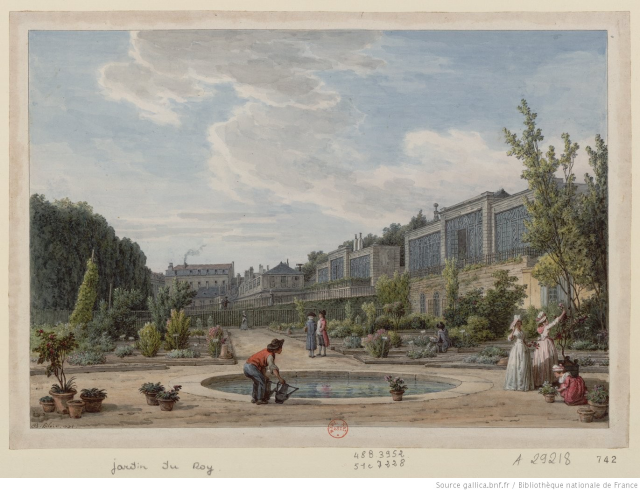 Scene in the centre of the gardens showing the new glasshouses built by Buffon in the late 1780s.  [See previous post] by Jean-Baptiste Hilaire, 1794

The old royal gardens were renamed simply the Jardin des Plantes, while the former administrative structure was swept away and twelve new professorial chairs established under a new director. In addition to the traditional posts in botany, chemistry and anatomy  there were now to be others including ones for mineralogy, agriculture and horticulture, forestry, natural history, geology and animal painting. Clearly science was to play an important new role in the new French Republic and the new museum was to be at its heart. 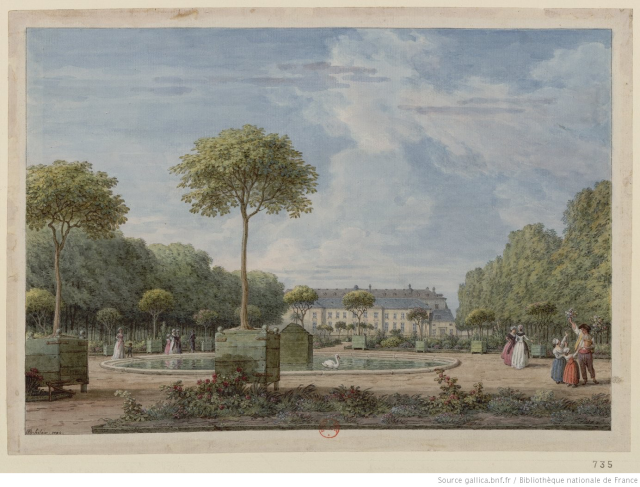 View across the central basin towards the old chateau, which had become the home of the natural history collection, by Jean-Baptiste Hilair, 1794

Soon there were plenty of  guide books and maps available for public use, and they, and Jean-Baptiste Hilair’s series of 11 paintings from  1794, give a good impression of how well organised and maintained the gardens must have been.

Several idealistic schemes  were considered for the proposed menagerie but the reality was very different.  It began with the authorities in Paris rounding up performing animals from the streets and sending them to the gardens along with their owners who were to become the first keepers. They were soon joined by the few surviving animals from the former king’s menagerie at Versailles,  and those from the one belonging to the Duc d’Orleans at Raincy.  That might sound impressive but the creatures are by all accounts in pretty poor shape and were housed very poorly when they arrived. Nevertheless  the new menagerie soon housed 58 animals.

The Bear Pit. The caption reads that Martin [presumably the bear] is very bored. Well there’s a big surprise!

Gradually this number increased and conditions improved, as animals were bought back from foreign menageries or the wild by the French army, and new buildings and quarters were constructed.  Bear Pits were opened in 1805 and a rotunda to house ruminant animals was built in 1812 in the shape of the cross of Napoleon’s new medal for the Legion of Honour.

The Rotunda, by Gaëtan Cathelineau, 1821

The menagerie was a sign that animals were now taking precedence over plants. and certainly the two leading scientists at the Museum, Étienne Geoffroy Saint-Hilaire and Georges Cuvier, were both much more interested in zoology and early theories of evolution than they were in botany.  Indeed throughout much of the 19thc botany played second fiddle to most of the other sciences. That’s reflected in the various guides to the museum and garden, which very much focus on the exotic animals rather than the plants. 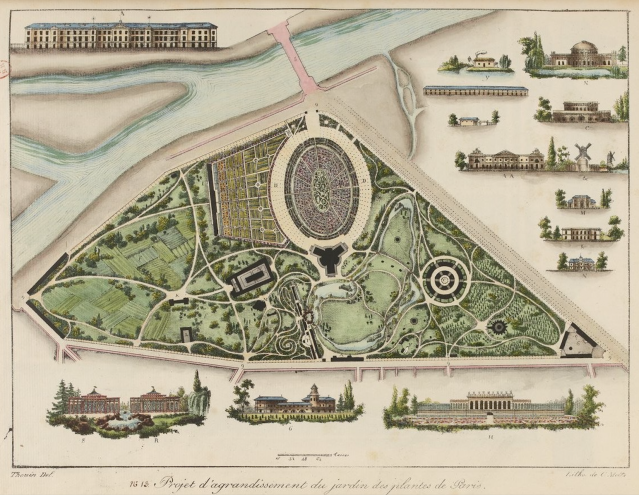 Gabriel Thouin’s grand but unrealised plans for an expansion of the gardens, published in 1820

Despite the many political upheavals from 1800 until the early 1840s, the new museum entered a settled period of growing popularity.  Andre Thouin, the head gardener, set up a school of agriculture in 1806 based in the old greenhouses  and when the monarchy was restored in 1815 his brother Gabriel, the landscape designer drew up plans for a  for a major expansion. Unfortunately this was never realised but the plans published in 1820 look fun and I bet Parisians now wish they’d be carried out.

Giraffes in the Rotunda enclosure, by Jean Pauquet, 1857

The giraffe aged two and a half

In 1827 the most famous of all the menagerie’s inhabitants arrived from Sudan as a present from the Khedive of Egypt to the King of France.  Apparently officially nameless she was nicknamed “Her Highness” by the press and became an instant celebrity. Her story was told in a lovely little book  Zarafa [derived from the Arabic word for giraffe] now available for pennies second-hand and definitely worth reading if  you don’t know it.

Captured as a baby she was one of three giraffes sent by the Khedive  to European monarchs  to curry favour in his struggle for independence from the Ottoman empire. The others was taken to England  and Vienna but soon died.

Shipped by barge and then a specially adapted boat “Her Highness”  arrived in Marseilles and overwintered before walking the 900km to Paris. She was accompanied on her trek by  St-Hilaire, the professor of zoology at the Museum who organised a yellow coat to keep her warm and special boots for her feet. Everywhere they passed through she was greeted by  huge crowds who came out to gawp and marvel,  while bands played and street celebrations took place. St- Hilaire wrote that  they “had to fight the crowds who rushed tumultuously at the animal,” until at last, after 41 days walking, she finally reached the Jardin des Plantes. 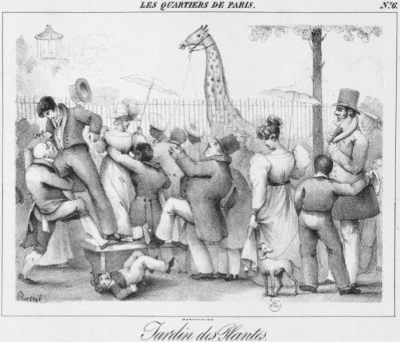 A message was sent to Charles X at Versailles  telling him about her arrival, and he was preparing to set off to see the giraffe himself when his wife intervened and said that it was beneath his dignity and that the giraffe should come and see him. Which Her Highness did before returning to the Jardin des Plantes where she lived for the next 18 years as one of the major attractions. 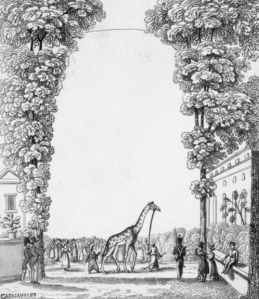 On July 12th, 1827 La Pandore reported that “the giraffe occupies all the public’s attention; one talks of nothing else in the circles of the capital.”

She inspired hairstyles and fashion, with colours like giraffe yellow and giraffe belly becoming very popular!

[For more on those aspects see the Fashion Historian blog and Michele Majer, “La Mode à la girafe: Fashion, Culture, and Politics in Bourbon Restoration France”, in Studies in the Decorative Arts, Vol 17, no.1 2009/10 pp.123-161 accessible through JSTOR. It’s easy to set up a free account there]

The giraffe being given exercise around the gardens by her grooms

After her death “Her Highness” was stuffed and can now be found at the top of the stairs in the Natural History Museum in La Rochelle. 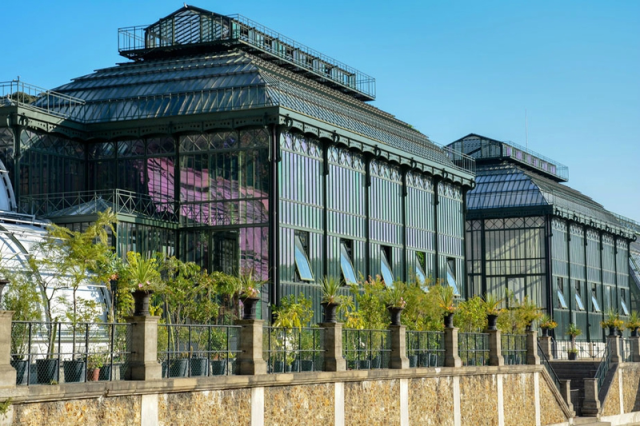 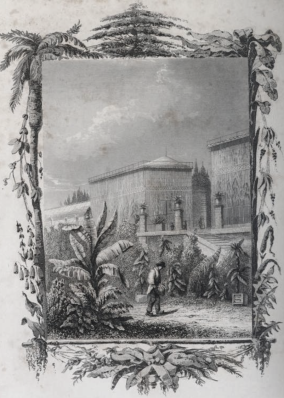 But Her Highness was not the only exotic introduction.  The French were just as eager plant hunters and explorers as the English and the early 19thc saw the introduction of many new species to the gardens, which meant that additional greenhouses were required. In 1833 the architect Charles Rohault de Fleury  was commissioned to build a pair of new conservatories – Les Grandes Serres – which were put up in 1834–1836  to replace the those put up by Buffon less than 50 years earlier. 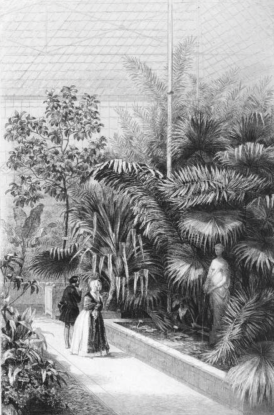 Inside the Grandes Serres, from Bernard’s Le Jardin des Plantes, 1842

De Fleury pioneered the use of cast iron buildings so the new structures were both elegant and efficient in allowing in the maximum amount of light.    They were large – 20m [65ft] x 12m [40ft] –  and heated by steam in pipes. One was originally dedicated largely  to plants from Mexico and the other to those from Australia.  They have now been replanted, with one   becoming  home to New Caledonian flora, 76% of which are endemic to those islands, a French overseas territory. The other has a wonderful display showing  the development of plants since they first appeared on land 430 million years ago.

Because by then the old chateau, even extended, had insufficient space for the collections de Fleury  was also asked to built a new gallery of Mineralogy and Geology which opened in 1837, the first building specifically intended to be a museum in France. The gardens and museums were by now one of the sights of Paris and were usually crowded with visitors. Unfortunately the siege of Paris during the Franco-Prussian War and the subsequent 1870 Commune were fairly disastrous  for the garden and the menagerie. Most of the creatures were eaten and the lack of fuel meant the end of heating and the loss of  many rare specimens.

Later in the century, however, there was another wave of building which restored the garden’s appeal.  The most prominent was the  massive new zoology gallery [now the Evolution Gallery] which was built across the end of the garden in 1889. It opens onto the broad central avenue leading down to the entrance where the statue of Buffon stands and dominates the view for visitors as they arrive.  More new galleries for Comparative Anatomy and Palaeontology were opened for the 1900 World Fair.

A series of smaller greenhouses were also added alongside at a lower level but these were severely damaged in the great storm of 1999 and have now been replaced with a long run of glasshouses which are home to a wonderful collection of cacti and other plants from arid environments. 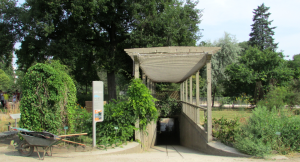 The 1930s saw several other developments in the gardens, notably the creation of a very large alpine garden, which includes areas of shade and damp as well as the more obvious rocky outcrops.  It is unusual in that it is about 3 meters below the level of the rest of the gardens and was excavated deliberately to try and create a series of suitable microclimates.  Because of that it’s easy to miss the entrance which is via a tunnel. It now features over 2000 species of plants  from mountainous areas  all over the world,. 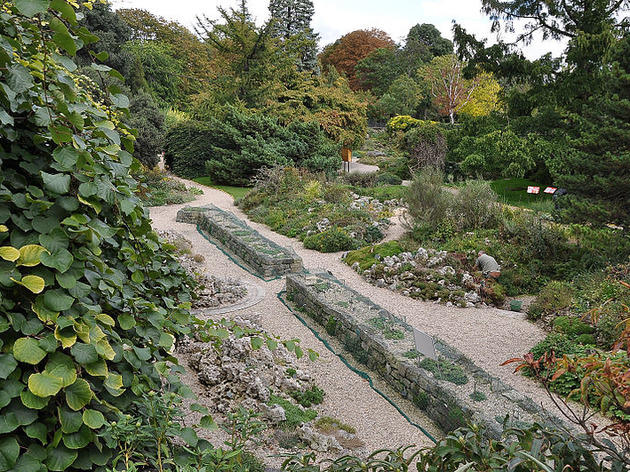 The Jardin des Plantes remains one of the great  attractions of Paris, and many of its buildings are listed as historical monuments.   A combination of Kew and the Natural History Museum,   it manages to wear its history lightly and mix it with a small zoo beautiful displays of plants as well as scientific research and conservation.  In line with the vision of the founding fathers  it now also has responsibility  for the management and care of a whole series of other natural history sites across France from the paleological at  Sansan to the arboretum  at  Versailles-Chèvreloup,  and from the zoo at Haute-Touche to the marine reserve and research station at Concarneau.

So do and go and visit when you get the chance! 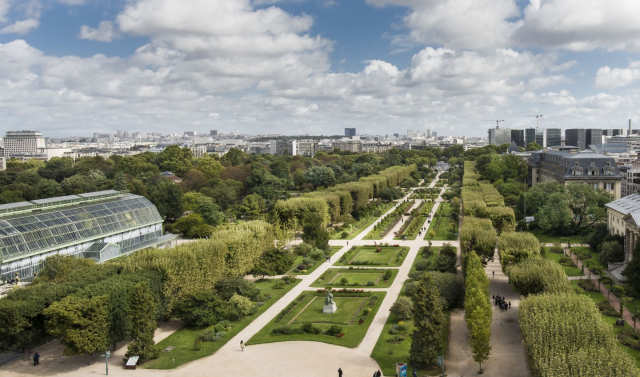