Guess where these wind chimes – technically a tintinabulum – were found

August is traditionally the silly season in the press and today’s post is very much in that tradition.

It was a bit of a surprise when I was searching for an image of garden statuary the other day on the British Museum website  and discovered these rather unusual wind chimes. Obviously given where I found them they’re not “hippy-related” free love ornaments from the swinging sixties, or even from the mild aisle of an “adult” shop, but you might be surprised where they do come from.

Quite quickly the original search for garden statues gave way to a search for a slightly more amusing [but maybe slightly more risqué] idea for a post here, and  I began to wonder what else I might find lurking in the archives to enlighten [enliven?] your Saturday morning breakfast!

The message could hardly be clearer.

The wind-chimes date from the 1st century and came  from the garden of a Roman villa,  but not the licentious city of Nero or Caligula where they  wouldn’t have caused too much of a surprise. After all we’re used to the idea of the Romans having statues of naked or semi-clad people and divinities, and indeed of gardens having them as ornaments ever since. In fact the villa was at Brading on the  Isle of Wight – not quite what  most of us would initially associate with the island although  maybe it would do wonders for their tourist industry?   Joking aside,  it reminded me that in 2002  the garden festival at Chaumont-sur-Loire chose Eroticism for its annual theme and then  in 2014 picked the Deadly Sins. And if they can get away with it so can I.

Susannah and the Elders, Tintoretto 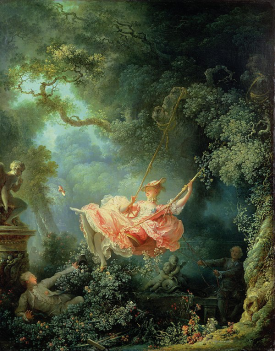 Don’t worry this is not going to be a post about  art history theory, rather just an aside before I launch into what I did discover, which is a mix of the serious and to put it mildly the less than serious.

The first artist who came to mind when I started thinking of erotica and the garden was   the cartoonist Thomas Rowlandson. He has a deserved reputation as a satirical cartoonist but leaving aside his political work most of us will have seen his takes on the old story of a pretty young woman married to much older man. These include scenes such as this where, while the husband is distracted by what’s growing in the hot bed [!], his wife is being offered a lot of attention by the gardener… 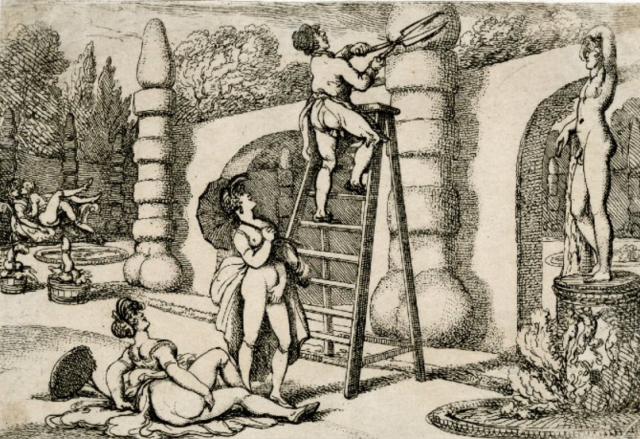 By way of example those of you who have been reading the blog for a few years might remember the scandals caused by Lady Anne Foley and her liaison with the Earl of Peterborough on the Stoke Edith estate. Click on the link to read the rest of the story…and several others in like vein. 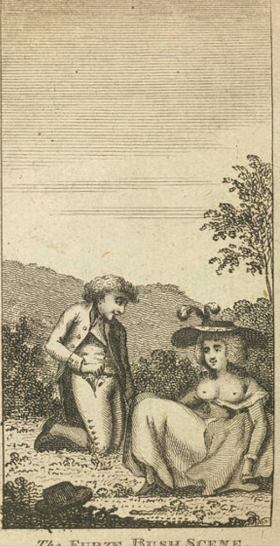 One wonders, however, what would have happened if Rowlandson had lived in Wisbech and pruned his trees like that. I suspect he’d have got into big trouble, as did Ian Ashmeade who was forced to reshape his garden hedge after a member of the public complained that it was offensive.

As the local paper the Wisbech Standard reported “The hedge… has stood proudly for eight years before the complaint this week which prompted police to act.” He was threatened with an £80 fine for a public order offence and reshaped the poor tree into a pea shooter [don’t ask – read the story to find out why]

But luckily for Bromsgrove tree surgeon, Chris Bishop the authorities are not always so heavy handed. Mr Bishop spent three years pruning and shaping a 25-year-old Cypress tree in his front garden into its distinctive shape. “I don’t want to offend anyone, I just want to make them smile.”

As his neighbour told the Daily Mirror “”To be honest with you once you’ve seen one you’ve seen them all!”  Even if it is 18 feet tall. Mr Bishop claimed to have  plans “to develop the saucy shrub and… complete the package.” 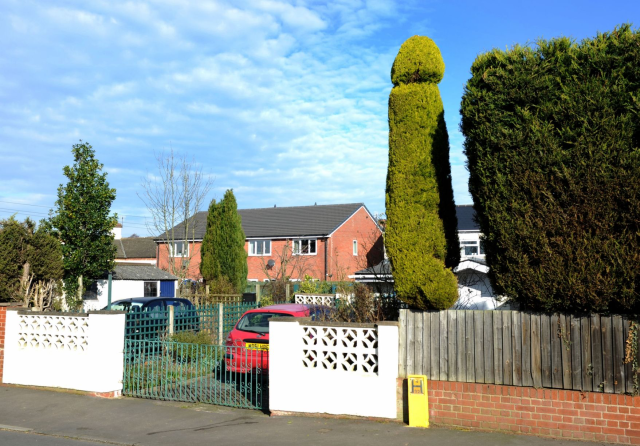 But the over excited cypress is nothing compared with the topiary garden dubbed “the rudest garden in Britain” by the Sun. 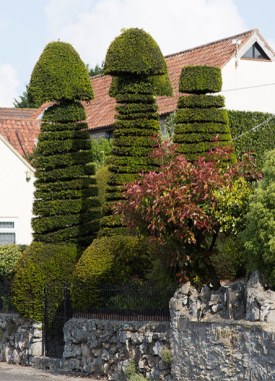 The garden  in the village of Cross in Somerset

A look at the picture suggests that Rowlandson wouldn’t have been impressed. It’s merely traditional topiary designs taken perhaps a little further than might be normal, but the opportunity it gave the journalist for double entendres proved irresistible.

“The giant green willies erected in a front garden received a prickly response from some locals.” That’s despite the fact that they must obviously be several decades old. They were apparently “discovered” by a  walker who posted some photos on Facebook captioned   “Some fallacious topiary?”

The house owner is reported to have said : “I’ve lived at the house for 20 years with my wife and it’s always been known as the ‘willy house’ by children who go to a school nearby.“It doesn’t bother me in the slightest.”“I’ve also had people walk past my house and ask me how I keep my hedges so well-maintained. I wind them up and tell them I put Viagra in the roots.”

The rudest garden in Britain? from Google Streetview 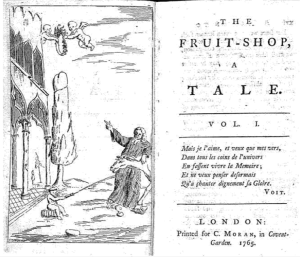 The frontispiece to The Fruit Shop, 1765 from Mighty Lewd Books

So what’s new about that I asked myself, but she goes on to show that it was  in the 18thc this  was actually written about extensively, and it led to the first literary pornography.  Don’t worry I’m not going to dwell on that too much, but there are examples of where we see similar kinds of topiary employed , as in this frontispiece to The Fruit-Shop [meaning brothel].

Sir Francis and a lady, probably Frances Barry his mistress after the death of Lady Dashwood, in  West Wycombe Park, Nathaniel Dance-Holland 1776

West Wycombe was the home of the infamous Sir Francis Dashwood, although in the portrait above he doesn’t look that naughty.  It’s been suggested that the temple in the frontispiece of The Fruit Shop is a reference to one in his garden.

West Wycombe Park, by William Hannan from the 1750s

There has been a lot of debate around Dashwood’s gardens. He commissioned paintings which don’t show anything terribly naughty but there are surviving maps and as Michael Symes points out, most of the features remain intact or have been sympathetically restored or recreated so its possible to get a nearly complete picture.  However there is a description of  a small part of it by fellow libertine John Wilkes .  “There are in these gardens no busts of Socrates, Epaminondas, or Hampden [ all worthy characters to be found in the gardens at Stowe]; but there is a most indecent statue of the unnatural satyr.”  This was probably a copy of the recently found statue of a satyr being rather intimate with a goat, which had just been uncovered in the excavations at Pompeii. To avoid shocking anyone, especially my mother who reads this blog if you want to see it click here and scroll down!

The Temple of Venus

There was however, says Wilkes,  “one remarkable temple… dedicated to the  – the Egyptian Hieroglyphic for ****. To this object his Lordship’s devotion is undoubtedly sincere.”  This is the Temple of Venus, which can seen in the distance on the right of Hannan’s painting. It is oval rather than round and  stands on a low mound.   Built in 1748 it looks innocent enough, taking the form of a simple domed [could one argue breast-shaped?] rotunda.   It contained a statue of the Venus de Medici but the game begins to be given away by the another statue  that originally sat on top –  Leda being embraced by an amorous swan. 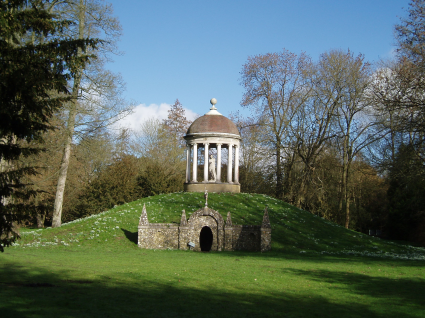 The Temple and the entrance to Venus’s Parlour

At the foot of the mound of Venus is  Venus’s Parlour, an underground grotto or cave where the sexual imagery becomes more graphic.

Design for the grotto entrance

The entrance called the “door of life” by Wilkes was oval  ” and  says Peakman” alluded playfully to sexuality and temptation, with symbols that all but the most obtuse visitor could understand.”   The National Trust is more direct: “this artificial mons veneris was entered through an oval opening flanked by curving screen walls – a very literal representation of a vagina, with the curving walls a pair of spread open legs.” 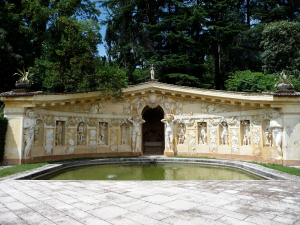 The nymphaeum at The Villa Barbara

Of course the design rather than the connotations also bears some similarity to Palladio’s nymphaeum for the Villa Barbara which Dashwood had probably visited on the Grand Tour. 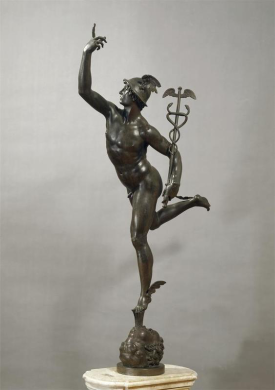 Above the doorway was a lead copy of Giambologna’s  Mercury which can be seen in a surviving sketch. Apart from his role as a messenger  Mercury conducted the souls of men to Paradise, while the metal mercury was seen as a cure for venereal diseases.

There was also a Latin inscription which Peakman translates colloquially as ” Go into action you youngsters; Put everything you’ve got into it together; Let not doves outdo your cooings, nor ivy your embraces, nor oysters your kisses.” . 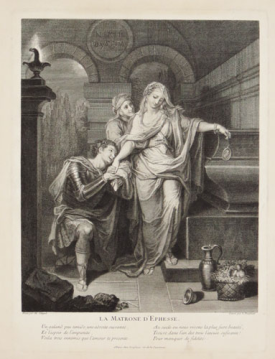 Once inside,  according to Wilkes the temple contained “two urns sacred to the Ephesian matron, and to Potiphar’s wife, with the inscriptions Matronae Ephesiae Cineres, Dominae Potiphar Cineres.” They might be obscure references to us today but to the classically educated Georgian gentleman who had been on the Grand Tour they would have been understood as symbols of female infidelity. The matron was a respectable and chaste figure in Petronius’ Satyricon who is eventually seduced by a soldier, whilst Potiphar’s wife was the woman who tried to seduce Joseph in the old testament story. So the sacred objects in the temple are really rather profane. 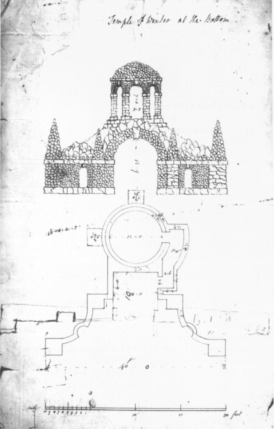 Perhaps an earlier design for the temple built or faced in flint, image from Michael Symes article [full ref below]

If this was not enough  Wilkes also noted  that Lord Bute had suggested Dashwood   build “an Erection, in a Paphian Column to stand at the Entrance…to be made of Scottish pebbles.”   This was another classical allusion to another Temple of Venus, this time at Paphos in Cyprus.  As the National Trust coyly notes “No trace of this flintwork phallus survives today.”

Dashwood’s heirs were clearly more prudish than he was and all the “naughty” stuff was swept away by Repton at the end of the century c.1796 when he worked on the site.

For more on West Wycombe and its landscape the best place to start is Michael Symes article “Flintwork, Freedom and Fantasy: The Landscape at West Wycombe”, in Garden History Vol. 33, No. 1 (Summer, 2005).

detail of showing the  Lake and the Temple of Daphne, William Hannan

detail of The Cascade and Lake, by William Hannan