Sometimes one stumbles across interesting people by pure chance. Today’s post is one such serendipitous discovery. I was looking for images for another post and found an interesting watercolour painting of a landscape by a woman I’d never heard of, but who seemed  interesting enough to do a quick search to see if she’d done any other paintings of interest. 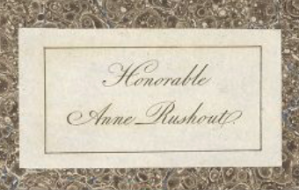 So let me introduce you to Anne Rushout of Northwick Park and Wanstead Grove.

Anne was the eldest daughter of Sir John Rushout, a Whig MP and descendant of Flemish merchant émigrés, and his wife Rebecca, daughter of a wealthy London glassmaker and merchant from Wanstead.   In 1797 Sir John was created Baron Northwick.   Anne was born at the family seat of Northwick Park in Worcestershire which had been bought and remodelled by her great-grandfather in 1683.  This work, and the adjacent orangery were probably done by William Talman.  Her grandfather added a new entrance front which it’s thought was designed by none other than Lord Burlington  in about 1732.  There’s more about this, and the rest of the history of Northwick at Houseandheritage.org

Anne was born in 1767 or 1768, the eldest of 5 children  She had 2 sisters and 2 brothers and was clearly both  well-educated and accomplished.  As a little girl she was included in several  portrait and sketches with her mother including one by Angelica Kauffman, while with her sisters Harriet (c.1770) and Elizabeth (1774) she was painted several times by Andrew Plimer the miniaturist and also by Henry Bone.  The paintings all became popular engravings.

Portrait on enamel inscribed on the back: The Honble Ann, Harriet and Elizabeth Rushout Daughters of Lord and Lady Northwick/ London Jany 1809 Painted by Henry Bone ARA Enamel painter to H.R.H. the Prince of Wales after a Miniature by Plimer

There are all sorts of stories about her early private life. One that her fiancee died just before their marriage. Another  that she was engaged to be married to her cousin, but that at almost the last  minute he dumped her and married her younger sister. Whatever the truth Anne never married.  For those who like to speculate there’s a lot more on those stories in Richard Bertocci’s Northwick Park: A Few Shiny Bits of English History of Possible Interest to Magpies and Bowerbirds, currently only available as an e-book on Amazon.

Two views of Northwick, published by Anne in 1815

Plate of porcelain painted in grey and gilded, thought to be painted by Anne V&A

That might have been the end of the story and she may just have ended up a spinster aunt living out her days in comfort at Northwick, being something of a bluestocking.  pursuing her painting and other ladylike occupations such as writing poetry, painting china  and publishing the odd engraving, but in 1817 her maternal uncle, George Bowles, died and bequeathed her a small fortune.

More importantly he also left her a house in Cavendish Square and  a life interest in his estate in Wanstead Grove which came with 60 acres.  The following year she had Wanstead Grove demolished and a new house started.  It was completed in 1824.

While this was going on the palatial mansion for which Wanstead is best known was being sold off to meet the debts of its owner, the dissipated William Pole-Tylney-Long-Wellesley, a nephew of the Duke of Wellington, sometimes known as “Wicked William”.   Anne was a friend of his wife, Catherine Tylney-Long who had inherited  Wanstead House and perhaps as a result Wanstead Grove was full of furniture and paintings that Anne purchased at the sale.

Temple and Lake at Wanstead Grove

Anne was to live at Wanstead Grove until her death in 1849, and according to Wicked William’s biographer  she was personally responsible for laying out the grounds.  Although she was only a child when work started she may well have remembered the landscaping of Northwick which had been done by William Emes, and she would certainly have lived with the results until she inherited Wanstead.  Did Emes work influence her?    Although her replacement  house has long been demolished, and most of the grounds long built over,  there are one or two small elements still visible, notably the  Temple.

Anne left some  personal records.  Yale  has one  common place book  while Worcestershire Archives have another that has entries from visitors to Northwick including Warren Hastings, whose house at Daylesford Anne painted, and George III’s nephew the Duke of Gloucester.  A further compilation of some 150 pieces in a variety of different hands dating mainly from c. 1780 to 1824 was bought by the Lewis Walpole Library in 2017.  Mainly poems or puzzles of various kinds they appear to be gifts to Anne from friends and acquaintances and show how wide her social circle spread. There are pieces by Fanny Burney, William Shenstone, Horace Walpole, Walter Scott.  David Garrick, the Sheridans and Sarah Siddons.   Unfortunately none of these collections has been digitised.

Although her earlier diaries have now been lost it was thought that later ones  from 1828 onwards were in London University’s Senate House Library and showed her to have succumbed in older age to religious fervour,  frequently attending chapel and making notes on the sermons she heard. Recent research has suggested that most of the diaries in this collection were probably not in fact written by Anne but more likely by one of her nieces.

What also survives and which forms the basis of this post are 3 of her later sketch books covering the period from 1824-1832.  These are now in the Yale Centre for British Art.  They show how widely she must have travelled through Britain and how interested she must have been in landscape as well as architecture. 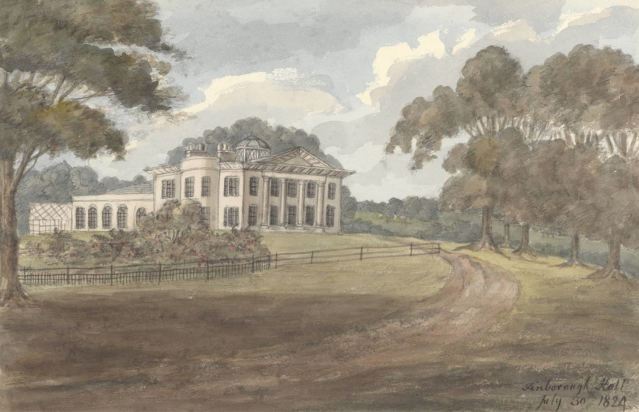 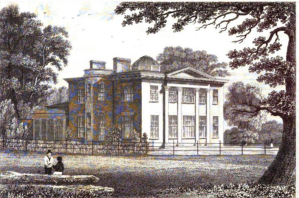 The first sketch shows Finborough Hall near Stowmarket which she painted in July 1824. It was a relatively new house, built in 1797 for Roger Pettiward a wealthy city stationer to designs by Francis Sandes  who had also worked at Ickworth.  According to Henry Davy’s 1827 Views of the seats of the noblemen and gentlemen in Suffolk, it stood in 200 acres with pleasure grounds “luxuriously ornamented with evergreens and laid out in good taste” and a 4 acre kitchen garden.  A dairy formed “a pretty object from the Stowmarket road” which was lined with “white tiles bought from Holland” and  and continuing  “specimens of old china” which makes it sound part of a ferme ornée.

She also painted three views of the park. Two  show a rustic summer house  and a venerable oak which she labels the Queen Elizabeth Oak

the third painted on another visit in 1828 shows a grand arched entrance to the flower garden.

Finborough Hall is now home to a school, with a golf course in the parkland, and as far as I can see from searching on the web there is little trace of any of these garden features.

The Flower Garden at Finborough , Sept 1828

The following month, August 1824, she visited Holkham on the north Norfolk coast, the home of the Earls of Leicester, painting a couple of sketches, one of the house and another of the end of the lake in front of it.

detail of her sketch of Holkham

Her next stop seems to have been Ely where she sketched the cathedral, and then she went south  to Cadland on the banks of the Solent.  This was the home of Robert Drummond of the banking family who had acquired Cadland in 1772, getting  Henry Holland to build a new house and Capability Brown to lay out the  Park. 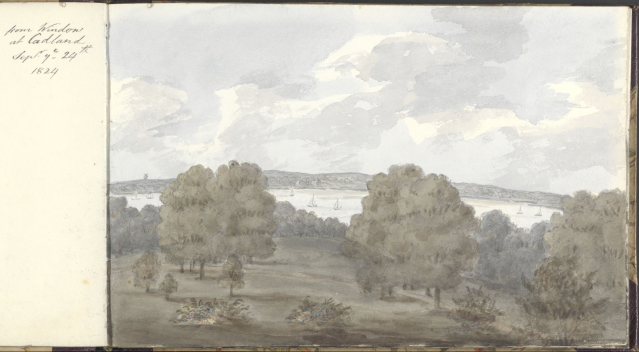 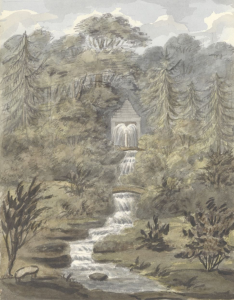 The long distance travelling continued as her next port of call was Sezincote in Gloucestershire, home of her sister Harriet.  The estate had been bought in 1795 by John Cockerell who had just returned from Bengal working in the armed forces of the East India Company. After his death in 1798 it was inherited by his younger brother Charles an MP who had married Harriet.  He employed a third brother, the architect Samuel Pepys Cockerell to design a new house “in the Indian manner.”

Although Samuel had also worked for the Company he’d never been to India and drew his inspiration from the many engravings that were available, particularly those of Thomas Daniell who  had spent ten years in India with his nephew William, making aquatints, watercolours and oils of Indian buildings and landscapes using a ‘camera obscura’.

The park and lake were probably designed by Humphry Repton in about 1804-5, and he may well worked  with Thomas Daniell. 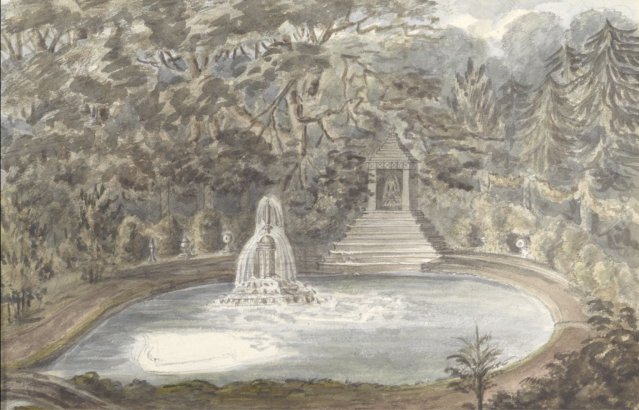 A little way north of the house there is a circular pool with a fountain and leadings way from that are  stone steps leading  up to the small square Temple of Surya (probably designed by Thomas Daniell) which has  a stepped pyramidal roof and an open front, containing a figure of the sun god Surya. 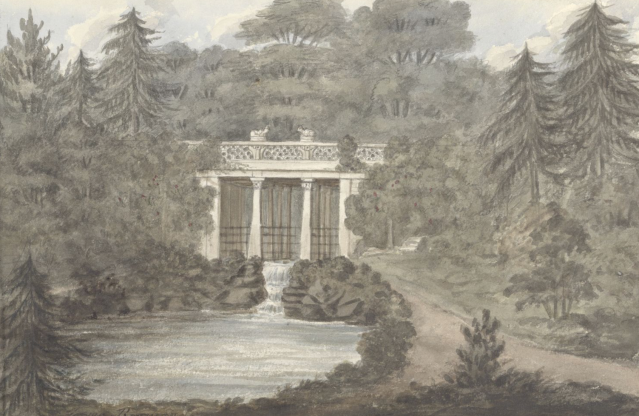 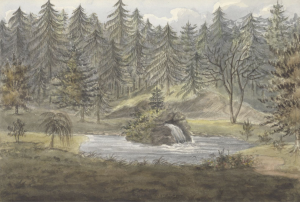 Descending eastwards from there is an area known as the Thornery with a stream running through a rocky gully and series of pools to a  lake.n Herbaceous borders, shrubs, and occasional clumps of bamboo line the stream edges while  lawns planted with specimen trees stretch out on either side.   It is crossed by a wonderful  Indian Bridge also designed by Daniell. 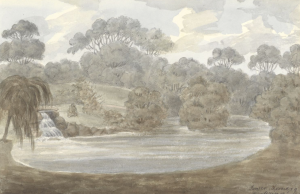 The Prince Regent visited Sezincote in 1807, and it’s likely that it influenced his ideas  for the Royal Pavilion in Brighton. Sadly as I recounted in an earlier post the job didn’t go to Repton  but to  John Nash, who echoed the exotic Indian style the prince  had admired at Sezincote.

Unfortunately not all Anne’s paintings are dated, and nor does she use the pages consecutively, instead she often  jumped several pages, leaving blanks which she then returned to fill later. As a result it’s not possible to  properly follow her tracks but she clearly enjoyed travelling around the country, and on one occasion took a trip to Normandy.

There are a group of sketches that were done on a trip through the Midland sand Wales in 1830, and also a series of sketches of her own garden at Wanstead  which I’ll look at in other posts, but I’ll finish up this [post with a selection of other gardens and places of interest she visited and which have ended up in the Yale archive. 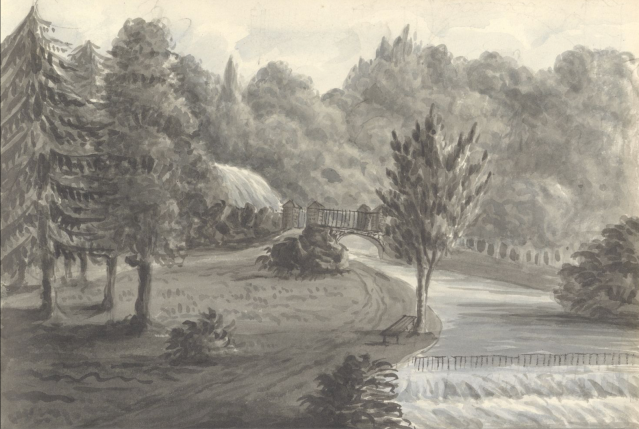 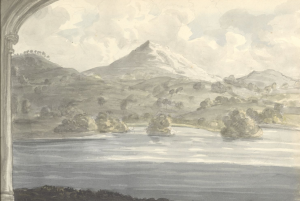 From the window at Eastnor , Gloucestershire Beacon, September 28, 1829,

In September 1829 she visited Eastnor Castle in Herefordshire, the seat of Earl Somers, which had only been completed in 1820 to a toy castle design by Robert Smirke, who was to go on and design the British Museum.  The grounds here were laid out in the Picturesque style.

And there was a trip to the south coast to Bersted Lodge at Bognor. In the early 1800s the house belonged to a Jamaican planter Thomas Smith who had married Susannah Mackworth-Praed. He died in 1825 but his widow continued to live in the house until her own death in 1856, so presumably Lady Anne was visiting her. The house was later renamed and is now owned by the local authority and divided into apartments.

A few days later  she was at Encombe, a house in the same Regency style as Bersted. I  assume this was Encombe House in Dorset owned by a branch of the Pitt family. Anne’s father had been  a supporter of William Pitt in Parliament so a visit there would have understandable but the photos and engravings I’ve found of that Encombe seem to  bear little relation to Anne’s sketches  so if anyone has any ideas please get in touch.

Encombe on the Isle of Purbeck

And let’s finish with two more surprising paintings. The first is of a very bare Hatfield…

Anne is clearly not a particularly talented artist but her work does have a certain charm  and despite the lack of much colour give a good insight into what some of these gardens and houses must have been like. We’ll go on another tour with her in a few weeks time.

Leave a Reply to The Gardens Trust Cancel reply