Guess where these wind chimes – technically a tintinabulum – were found

August is traditionally the silly season in the press and today’s post is very much in that tradition.

It was a bit of a surprise when I was searching for an image of garden statuary the other day on the British Museum website  and discovered these rather unusual wind chimes. Obviously given where I found them they’re not “hippy-related” free love ornaments from the swinging sixties, or even from the mild aisle of an “adult” shop, but you might be surprised where they do come from.

Quite quickly the original search for garden statues gave way to a search for a slightly more amusing [but maybe slightly more risqué] idea for a post here, and  I began to wonder what else I might find lurking in the archives to enlighten [enliven?] your Saturday morning breakfast!

END_OF_DOCUMENT_TOKEN_TO_BE_REPLACED

Immortalising the ephemeral: The painter, his patrons and their plants 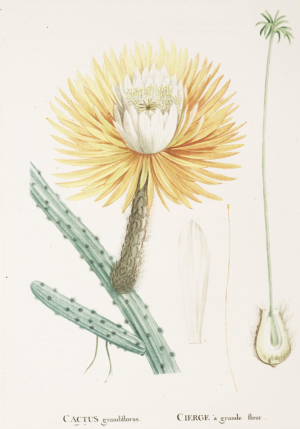 I wrote recently about the gardens and the greenhouse that Josephine, the wife of Napoleon, created at Malmaison near Paris.   Employing some of the leading botanists and gardeners in France, and never short of a franc or two, the empress was able to give rein to all her wildest horticultural desires.  However she knew that gardens are ephemeral and  she was equally  determined that her collection would not be forgotten.

Talleyrand, the cynical French diplomat who acted, amongst other things, as Napoleon’s foreign minister was asked whether Josephine had intelligence. He  replied that no-one managed as brilliantly without it as she did.  However her way of ensuring that the garden at Malmaison lives on eternally gives the lie to that.

These days her way of capturing her garden and its rare plant collection would  be endless photographs, video clips on YouTube and probably a TV programme or two hosted by a prominent TV celeb gardener.

These were not choices open to Josephine. Instead she had to make do with choosing the best botanical artist then alive to paint them and publish the result. By choosing Pierre-Joseph Redouté the job was done, and Malmaison and its plant collection [not just its roses] are still remembered , even though the gardens really only lasted about 25 years.

If that’s not intelligence I’m not sure what is!

END_OF_DOCUMENT_TOKEN_TO_BE_REPLACED

If I told you that there were about 500 late 16thc maps and views showing landscapes and gardens from  across four continents collected together in one place you’d probably be a bit surprised.  The reason you probably don’t know about them because they’re not detailed measurable drawings and they don’t have  elaborate planting plans BUT they do exist and  can be found  in the first  atlas  of towns published in 6 volumes between 1572 and 1617

I was originally going to use the name of the atlas for the title of this post but I suspect if you’d seen  Braun & Hogenberg’s  Civitates Orbis Terrarum in the subject line  the post would have gone straight into the trash unread.  So I hope you’ll read on when I tell you that although the title maybe a bit of an unpronounceable mouthful the content of this collection of maps of European cities was ground-breaking when it was published and still staggering in its conception, utility and aesthetic appeal.

END_OF_DOCUMENT_TOKEN_TO_BE_REPLACED

Hats off to Hyde Hall

The cover of the first RHS guide 1994

A couple of weeks ago, as the lockdown started to lift and gardens began tentatively to re-open, I was taken to Hyde Hall, the Essex garden of the Royal Horticultural Society. I’ve been several times before and have always come away slightly disappointed  but this time things felt different. Partly obviously because it was good to be back outside after so long being confined to the house but also because Hyde Hall is developing into a much more interesting garden. That’s quite strange since according to Matthew Wilson, the former curator “There probably shouldn’t be a garden at Hyde Hall, given the challenges and complexities of the site, soil and climate. The fact that there is gives hope that even the least promising site can be gardened.” [FT 25th May 2018]

END_OF_DOCUMENT_TOKEN_TO_BE_REPLACED 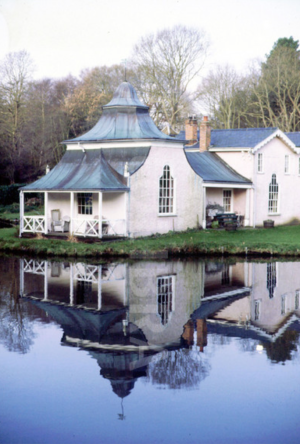 The Quarters, photo by Gwynn Headley, 1982

You don’t have to be the slightest bit interested in fishing to be attracted to some of  the buildings associated with it.  Because of their settings, many are delightful places to spend time in: after all what’s nicer than sitting by water and watching the world go by.

Way back in 2016  I wrote a couple of posts about  fishing lodges and temples.  The first was on the earliest  surviving ones, from the mediaeval and early modern periods, then a second about early 18thc  ones. But I kept finding more so today’s post is a brief look at 3 more historic sites, associated with angling and dating from the later 18thc.