Sherlock Holmes and her Noah’s Ark 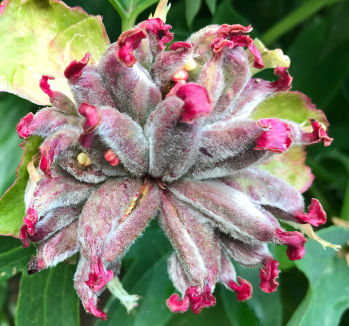 Any idea what plant this is? If you grow them you probably know but if you don’t why not have a guess

Yes its an extraordinary title for a post but it’s about an extraordinary project.   Just before Britain celebrated the Platinum Jubilee garden lovers in France were celebrating the re-opening of an amazing garden which itself only celebrates one family of plants.   Housed in the grounds of a huge 18thc chateau it is  the brainchild of one woman who has been building her collection – now the largest in the world – for  less than 20 years and only made it public in 2016.  To make matters more unusual it’s only open a few weeks each year.

Any ideas of Who? What? Why? and Where?

The photos are my own unless otherwise acknowledged, while the quotes are my translations of a range of interviews [almost all in French  with the owner of the collection or from articles she has written, but I’m afraid it was too complicated to reference them all in the usual way. Most can be found on the press page of the website of the Chateau.

Let’s start with the where. 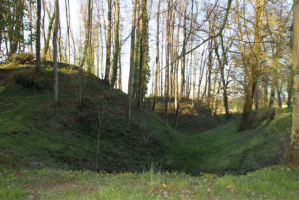 The mediaeval motte and its surrounding ditch

It’s the Chateau de Sourches, just outside the village of St Symphorien, west of Le Mans in the department of the Sarthe.  The site has been inhabited since the 11thc when it was inherited by two warring brothers who built motte and bailey castles in adjoining villages, one just a few metres away from the present chateau, and where amazingly there are still visible remains

One brother accompanied William the Conqueror to England, fought at Hastings and settled there, but the other remained in France and the estate stayed in his half of the family for the next 25 generations with one of them building a more permanent chateau  in the 15thc.  It had extensive grounds and these were laid out in grand parkland style by Jules-Hardouin Mansart around 1700 and the basic design with its long vistas and formal lime avenues  has not, apart from replanting,  been much altered since. 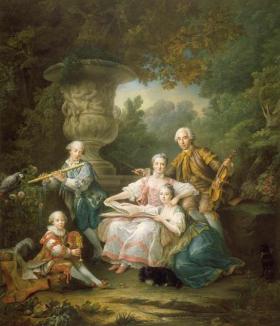 The present  enormous  neo-classical pile, replaced the earlier chateau on the same site, and was built in the last decades before the  French Revolution. It was designed by Gabriel de Lestrade, a royal architect,  for Louis du Bouchet, Marquis de Sourches, and Grand Prévôt de France. The new building remained within the confines of the medieval moat but an impressive cour d’honneur was added in front. 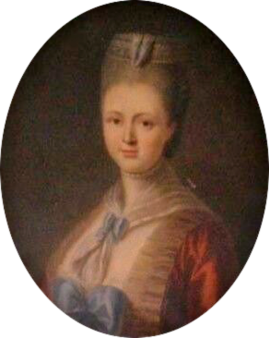 The Marquis died just two years after its completion  and  Sourches was inherited by his daughter-in-law, Louise-Élisabeth de Croÿ, who had a prominent role at court as governess to the children of Marie Antoinette and Louis XVI.   Imprisoned with the royal family and only narrowly escaping the guillotine her memoirs provide an inside account of their final days.   Later Sourches was inherited by  the Pérusse des Cars family and it remained in their hands until 1985. 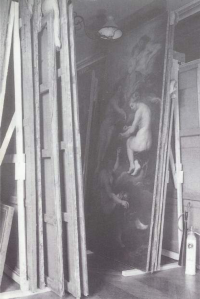 pictures stacked in the dining room during the war

The chateau, which is the largest in the department,   had an extraordinary role during the Second World War when it sheltered artworks from the Louvre and Versailles as well as the Bayeux Tapestry. Copies of some of the most famous pieces still hang on the basement walls today. After the war an agricultural research station was set up in the grounds, which I think is still there, but  the chateau itself was one of a number bought  in 1985 by a  company owned by a wealthy Japanese heiress, Kiko Nakahara, and her  French-American husband.  They pledged to renovate them and turn them into luxury hotels, but proved to be a lie. Instead the   company simply removed and sold the fittings, furnishing, garden statues  etc  and left the various chateaux to rot.   It caused a huge scandal in France and the couple ended up in prison.  Luckily Sourches was one of least badly affected and after government intervention,  it was sold to the family of the current owners in 2001 and major restoration work started. Now they live in the main part of the building while the basements  and the chateau grounds have been given new life as a cultural and events centre as well as the plant collection. 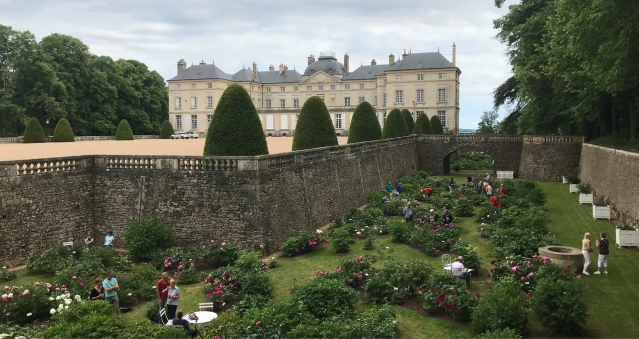 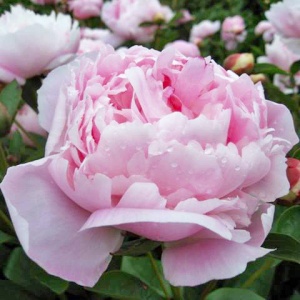 The main attraction for us though is that the vast mediaeval moat – about 15,000 sq metres – that surrounds the chateau on three sides which is now home to the world’s largest collection of peonies.

It opened officially in 2016  with 1500 peony plants covering 1454 carefully identified varieties but  the owner had already been buying peonies for years with the aim of conserving  old varieties which were in danger of being lost, creating what she calls “a sort of Noah’s Ark” for peonies. 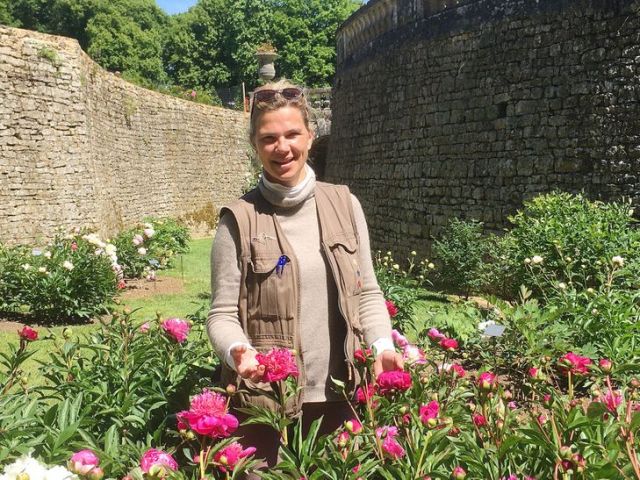 The person behind this is Mme Bénédicte de Foucaud. I learned a lot the first time I did a tour of the collection with her before the pandemic.  I knew – or at least I thought `I did – a fair amount about peonies. Apart from the various species,  they fell into 2 main groups: herbaceous and tree peonies. 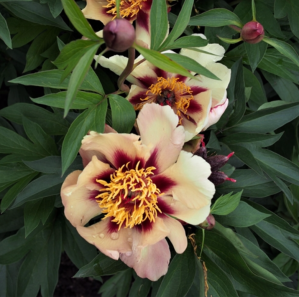 However I wasn’t really aware that there was a third kind, a  man-made one known now as intersectional hybrids, which were first bred  by Toïchi Itoh, a Japanese grower in 1948. These tend to be like tree peonies in appearance but like the herbaceous kinds in size.  Of that original display in 2016 27 were species, 428 were tree peonies,  50  intersectional hybrids and the rest herbaceous varieties.

At the opening Mme de Foucaud  also spoke of her ambition to grow the collection further which in theory shouldn’t be difficult since there are apparently  around 5,000 herbaceous cultivars and about 600 shrub cultivars  which have been registered worldwide. She wanted them all! 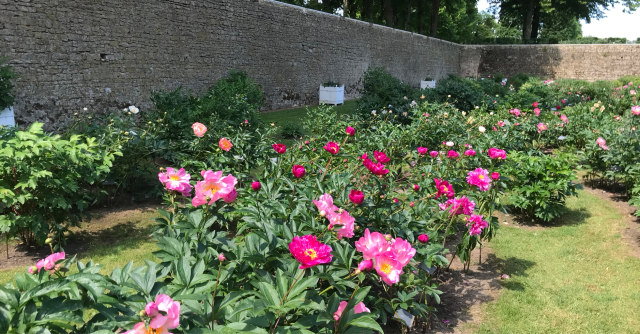 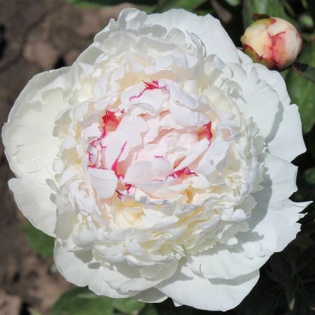 The idea of creating a peony collection really started on a trip to Amsterdam in 2003 after she bought her  first peony «Madame de Verneville» which is described by Kelways as “an early to mid-season cultivar with white double bomb-shaped flowers and a central crown of white petals with a few crimson flecks and a hint of yellow from the centre base. Highly fragrant with a rose scent.” 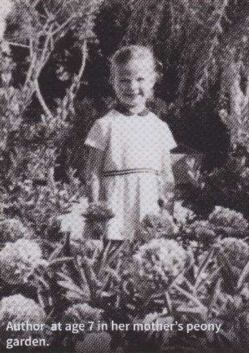 from the Spring 2021 Bulletin of the American Peony Society

But there was a family history before that. When she was born her mother planted some peony seeds which finally flowered when she 6. Her mother was a keen photographer and  later insisted that she pose with the plant and  “this moment has never been erased from my memory. This is probably where my passion for peonies comes from. ” 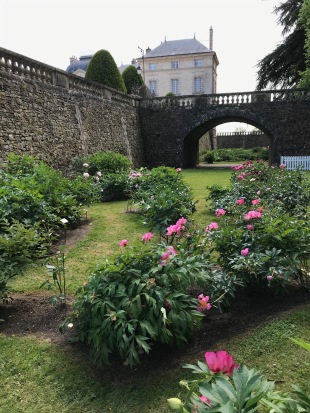 From buying that one plant of Madame de Verneville her plans quickly snowballed and she started to plant a peony garden in the grounds near the chateau. The first plants went into large pots  “but I discovered the following spring that, if they escaped the snouts of the wild boars they had been a delight for the deer.”  So all those that survived were moved into the walled garden. “There they became a joy for hares, rabbits and field mice.” 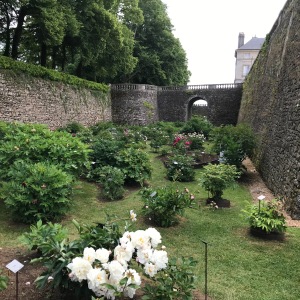 These depredations led  to a major rethink especially when she realised another important fact about peonies – that they don’t like competition. She said  that  “the cohabitation of peonies with other plants is impossible since the peony is greedy, solitary, egotistic, fanciful, susceptible.”  It got worse because  “nor do they like wind or heavy rain although they do like the sun, so I thought about moving. But it  would be more difficult to transport Sourches to the south than to acclimatise this very capricious but oh so wonderful plant family.”   After toying briefly with the idea of clearing some of Mansart’s elderly and sick avenues of lime trees she turned her attention to the deep dry moat that surrounds the chateau. Here the walls retained the heat – the moat is on average up to 5 degrees warmer than anywhere else on the estate. They are also a barrier against strong winds, and because of the natural drainage system rain didn’t present a major problem either.  Because they are deep with only one sloped entrance that has massive gates marauding creatures can’t get in. 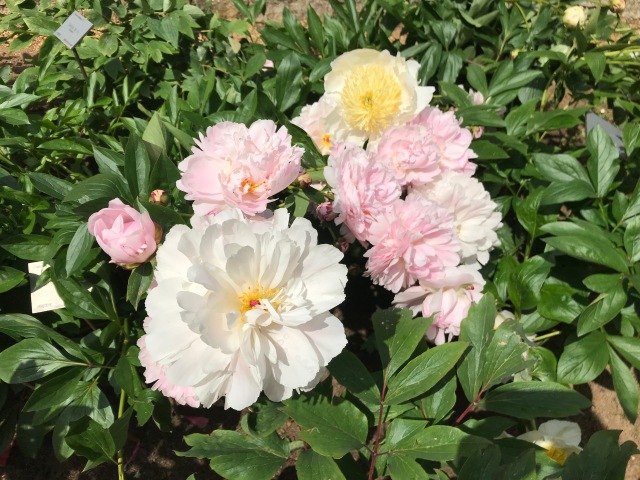 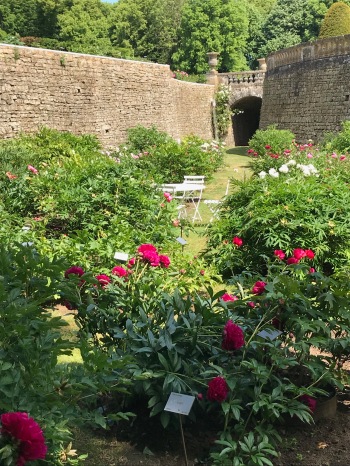 From 2009, Bénédicte de Foucaud began to travel, notably to America and China, to bring back rare specimens. “I don’t like doing things by halves,” she insists. A French  magazine dubbed her the Sherlock Holmes of peonies because she has been known to travel the world herself, including China,   tracking down new acquisitions as well as developing more normal supply links with growers all over Europe, North America , and even New Zealand as well, of course, as  Japan. 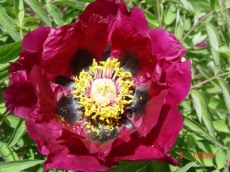 Planting started in 2010 in irregular shaped beds organised by colour size and time of flowering and the first flowers appeared in 2011 encouraging her to continue  putting new plants  here rather than elsewhere. Despite terrible wet summers in 2012 , 2013 and 2014 the peonies flourished and the idea of the conservatoire – or the equivalent of a national collection in the UK- was born.   Later she added beds to celebrate the work of individual breeders or nurseries grouping together plants they had introduced.  More recently she had even started new beds to demonstrate the breeding of varieties, especially the intersectional hybrids,  to visitors. 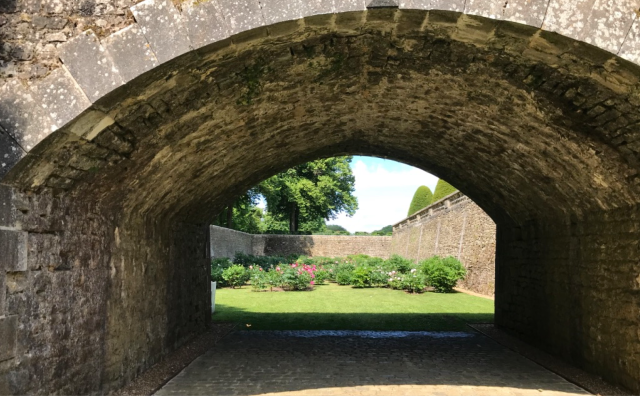 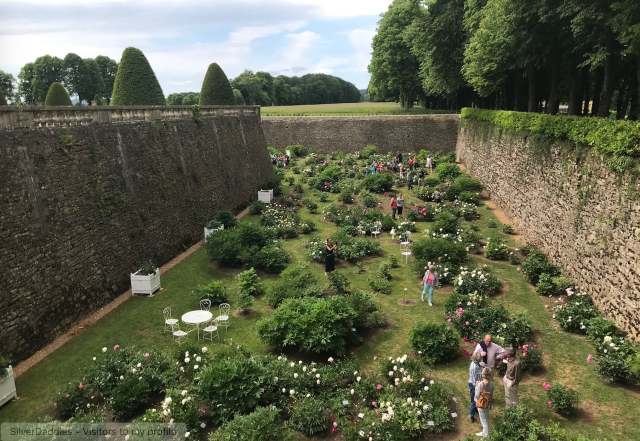 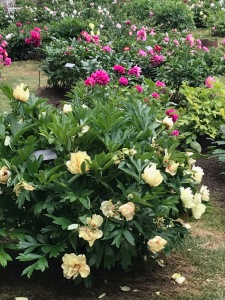 And as a sign that she’s a true aficionado she admits  its not just beautiful peonies she’s after.   She’ll collect them all even if some of her new acquisitions are less than alluring.  “Fortunately peonies have good genes so ugly ones are rare!” 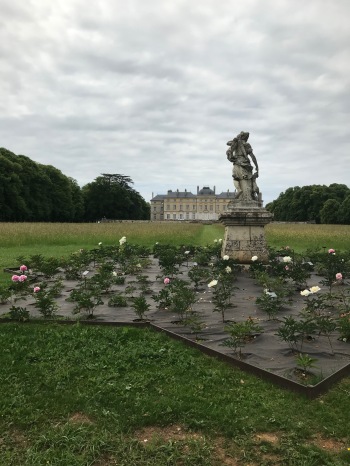 By 2017 there were 2000 plants with 200 more added the following year. Last year there this had grown to  3200 plants of 2688 varieties!  The moat is now pretty much full to bursting point and so she has started planting out on the slopes of the chateau’s terraces  with more  around the statue that forms an eye-cathcher in the middle of Mansart’s long  axis. These are mainly tougher varities and she’s hoping the various beasts will leave them alone! 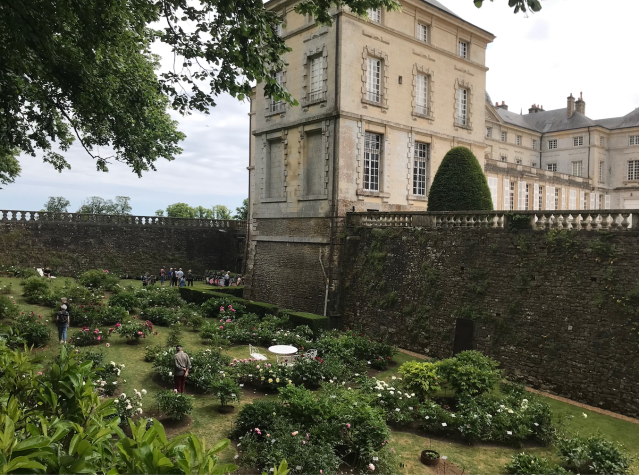 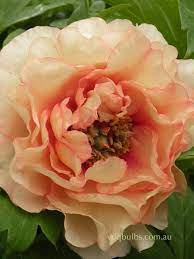 I didn’t dare ask that perennial questions that all gardeners dread, although I’m sure she regularly gets it: ie what’s your favourite?  Instead she has on various occasions named a few of them for different reasons.  “La Perle” bred by Crousse in 1886 and Zi Yan bred by Dezhoing for the scent. Loyola, Iphigenia and Black Panther for their colour… 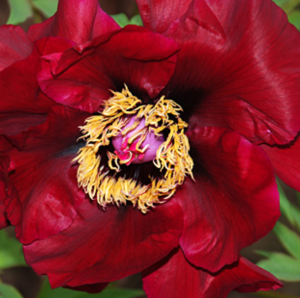 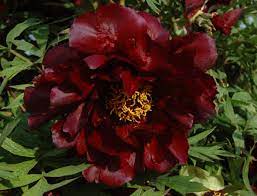 …Infanta or ‘Early Windflower’ for their foliage. 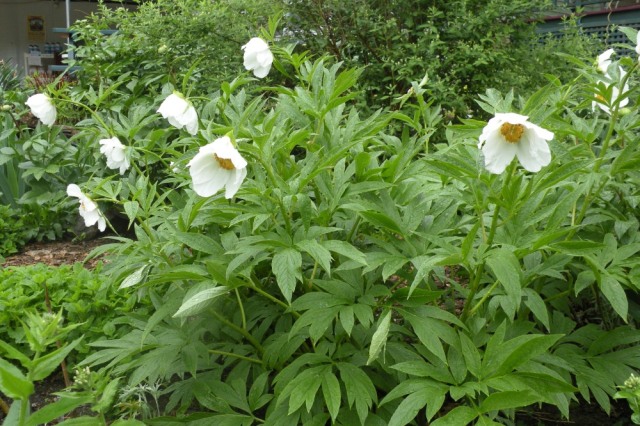 and Aurore Boreale, Eve of Radiance, Belle Toulousaine, Love Affair or Futakami for their “abundant or original” flowering. 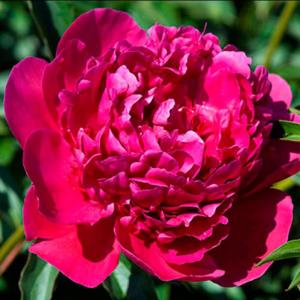 She’s also very interested in the historical context of  the names of new cultivars, and cites one example of a variety named Victoire de la Marne.  This was introduced in 1915 by the nurseryman Auguste Dessert and named to commemorate those seriously injured French soldiers who were sent to the military hospital installed in the famous Chateau of Chenonceau in the Loire Valley, where it just so happened that   Dessert was the local mayor and so “his peony is not merely a flower, it is a historical sanctuary.”

Mme de Foucaud has written 3 books about peonies and is 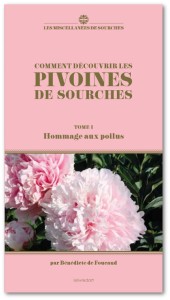 in the middle of a fourth, but she has also started a new project to record them all. Not photographically but in the traditional way through the work of botanical artists.

Three artists have been visiting each peony season and can often be seen in the moat sketching or with their box of watercolours. The aim is to replicate Pierre-Joseph Redoute’s visual encyclopaedia of roses, but for peonies but its a slow process and in the meantime you’ll have to make do with prints of some of their work which is available in the small shop, where you can of course also buy peonies from leading growers to take home and begin your own Noah’s Ark!

For more information the best place to start is the Sourches website, and follow the links – including to the artists – there.