Its been a while since I wrote my last piece on Humphry Repton and I was thinking about a follow-up on the Picturesque when into my inbox  came a new post from Matthew Beckett’s excellent blog The Country Seat covering just that.   I’m not sure its  the done thing to recommend  a’rival’ blog but I’m going to anyway!  Take a look at: http://thecountryseat.org.uk/2014/05/26/purchasing-the-picturesque-hampton-court-and-lasborough-park-for-sale/ 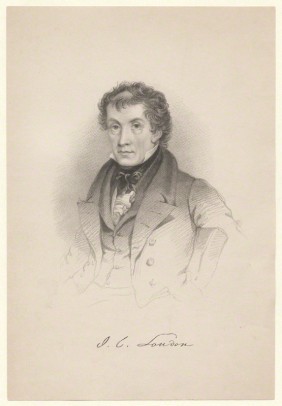 So instead I’m going to follow up Repton in a different way over the next couple of posts, by looking at some aspects of the man who assumed his mantle as the leading garden designer and theorist of the early 19thc: John Claudius Loudon.

Whilst  Repton had been the most prolific garden writer of the 18thc with a whole string of books on the theory and practice of landscape gardening, he was a mere childish scribbler when compared to Loudon who wrote encyclopedic tomes containing millions of words and thousands of illustrations.

Born in Scotland in 1783  you get some idea of what sort of man he was from a journal entry quoted by his wife later in his biography:  “I am now twenty years of age, and perhaps a third part of my life has passed away, and yet what have I done to benefit my fellow-men?”  Incidentally, we have a brief biography of Loudon on our database:

He started writing young. His first works Observations on the Formation and Management of Useful and Ornamental Plantations    and Hints respecting the manner of laying out the grounds of the public squares in London’  were published in 1804 soon after he arrived in London where he was to live for the rest of his life.   On the title page of Observations was a quote from Francis Bacon which sums up Loudon’s approach to life and his work:  ‘Knowledge is Power’.

Loudon aimed to spread knowledge as widely as possible and he wrote seemingly ceaselessly all his life.  Of course this would all have been done in long hand…. the sheer physicality of the task [especially when you see the size of even one of his myriad publications] is mind-boggling.  In itself this would have been remarkable but it was all the more so since his right arm had to be amputated in 1825 following a botched operation.

Not only did he write but he also edited a whole range of periodicals, ranging from The Gardener’s Magazine and later The Gardener’s Gazette, to  The Magazine of Natural History and The Architectural Magazine.   Even the task of reading his work is daunting simply because of the size and scale of the undertaking.  Most of his books can be read on-line or are available as free downloads, and a good place to start is: http://onlinebooks.library.upenn.edu/webbin/book/lookupname?key=Loudon%2C%20J.%20C.%20(John%20Claudius)%2C%201783-1843

And if this was not enough he was an artist, exhibiting at the Royal Academy in 1804 and being elected to the Royal Society of Arts, the following year at the age of just 22.

from A Short Treatise on Several Improvements, Recently Made in Hot-houses

More importantly he was also a  designer and inventor. Fascinated by greenhouse technology he experimented with the layout and design of glass roofs and walls to maximise potential light. In 1805, at the age of just 22,  he published the 2 volumes of  A Short Treatise on Several Improvements Recently Made in Hot-Houses which includes an account of a new patented ‘Loudon’s hothouse furnace’.

This new invention was easily obtainable ‘for just £2.10s’ at ‘the Edinburgh Foundry or Mr Dalziel’s (cabinet makers), Chapel Street, London, on enquiring for Loudon’s Improved Hothouse Furnace, which words are printed upon the door of the furnace. The improved ash-pit door, made according to the figure given in plate I. and the grate, are had along the above furnace, and are included in with the price’.   John Claudius sounded as if he was a typical Victorian entrepreneur but sadly he was anything but that.

The following year saw  a two-volume 600 page Treatise on Forming, Improving, and Managing Country Residences  which included a section on the design of pineapple houses. 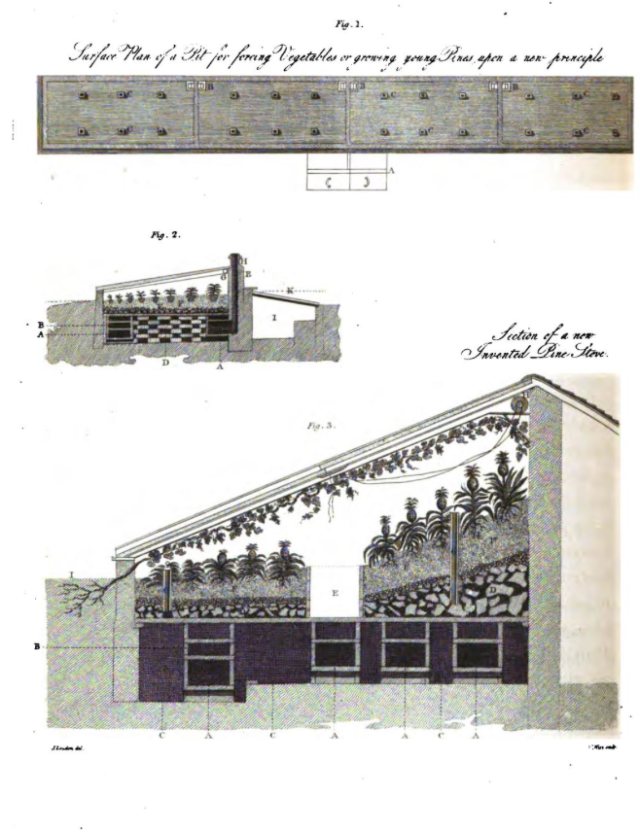 He enlarged on this in 1823 in  The Different Modes of Cultivating the Pine-Apple.

Loudon’s most significant invention was a method of making glazing bars in wrought iron that could be made in curvilinear sections. The big breakthrough was to make them flexible enough to be bent in any direction without reducing their strength.  Suddenly curvilinear or even conical glazing was possible and the great age of glasshouses and conservatories was born. 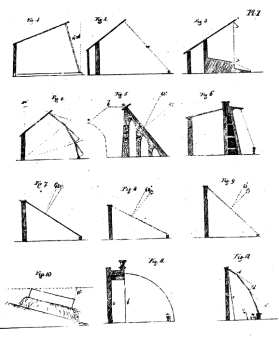 from Loudon’s Remarks on the Construction of Hothouses,  1817. 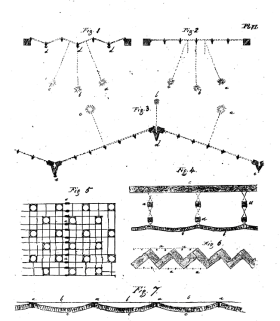 This led to the publication of  Remarks on the Construction of Hot-Houses in 1817 and in 1818 A Comparative View of the Common and Curvilinear Mode of Roofing Hot-Houses and Sketches of Curvilinear Hot-Houses. 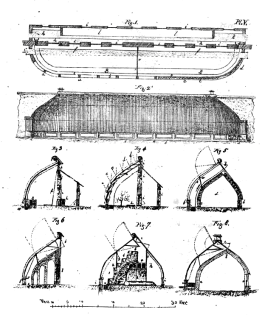 Unfortunately he sold the idea for the glazing bar  to  Messrs W. and D. Bailey of Holborn at an early stage.  They patented it in 1818 and so Loudon did not reap any financial reward from his invention, which is a pity since he was, despite all his publication, on the edge of bankruptcy much of his life.

from Loudon’s Remarks on the Construction of Hothouses,  1817.

Loudon collaborated with Baileys on a number of glasshouses in the following years. including Felton Park in Northumberland.  Unfortunately we don’t have an entry on our database for Felton so if anyone knows anything about it please get in touch.  A recent report by English Heritage suggests that the greenhouse there, to a design by Loudon,  was supplied in kit form, then erected on site by Baileys but glazed by one of the many local glass manufacturers. A copy of the report can be downloaded at : 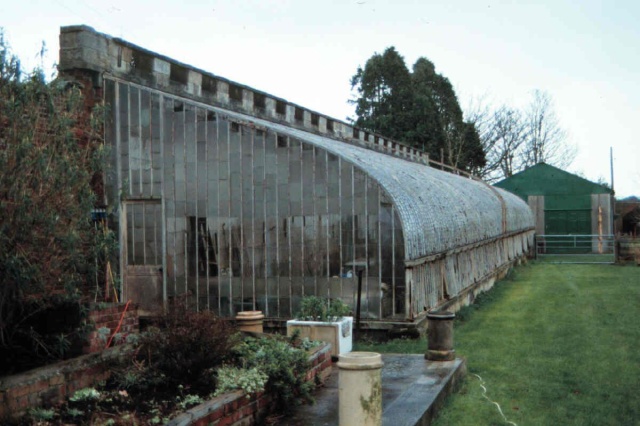 Later in 1824 Loudon published  The Green-House Companion advising readers on what plants to grow in their new structures, because of course, ‘the management of plants in a free-house requires a higher degree of knowledge than is called for in the management of the open garden…and the object of the Green-House Companion is to supply what is wanting in that respect.’  Loudon also published a large number of detailed plant reference books often using information supplied by John Lindley, secretary of the Horticultural Society of London, and the first professor of botany at London University.

In it, Loudon points out that ‘a greenhouse which fifty years ago was a luxury not often to be met with, is now become an appendage to every villa, and to many town residences…and which mankind recognises as a mark of elegant and refined enjoyment.’ 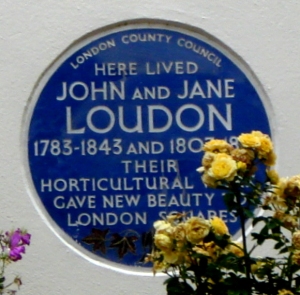 He lived up to his claims when designing a new house for himself, and his  villa at 3 Porchester Terrace, Bayswater, [which now has a blue plaque] has an impressive glass domed entrance /conservatory which can still be seen.

Other glasshouses with Loudon connections include Bicton Park near Exmouth in Devon, which looks remarkably like the designs in Remarks on the Construction of Hothouses shown above. Probably built in the early 1820s the enormous dome is unsupported and the structure is held together by simple pressure and Loudon’s glazing bar. There is an interesting commentary on Bicton  by Candida Lycett Green at:

and we have a database entry on Bicton and its history at:

Another of Loudon’s major projects was  his design for the layout of Birmingham Botanical Gardens which opened in 1832. He included plans for a massive three-storey circular glasshouse within a wrought-iron framework. Sadly this was rejected by the committee in favour of a simpler arrangement that was replaced later in the century.

The simpler design chosen instead of Loudon’s grand glasshouse, in a painting of 1855 http://www.birminghambotanicalgardens.org.uk/gardens/history/gardens-and-buildings

Loudon was dismissive of this:  ‘ This range, taking it altogether, is one of the worst in point of taste that we know of. The centre is semicircular in the front part of the plan, with a lofty dome, sur mounted by a second small dome, cupola, or glass turret, not unlike in form to those sometimes put up on the roofs of offices for pigeons, and totally unfit for plants ; unless we suppose that the spiry top of an Araucaria imbricata could be induced to rise into it; while the two sides or wings, joined to this curvilinear centre are common shed-roofed structures, not half the height of the dome. The want of harmony between the centre and the wings is most conspicuous, from whatever direction the whole may be viewed, and in our eyes it is most offensive….. we dislike exceedingly the idea of having our name associated in any degree, however slight, with a garden which, though it might have been one of the most perfect in its kind existing any where, and altogether unique in some of its arrangements, is now bungled, and never likely to reflect credit on any one connected with it.’  (Gardeners Magazine (August 1839, p.456).For more information on Loudon’s original design see Georg Kohlmaier, Houses of Glass: A Nineteenth Century Building Type (MIT Press, 1986).

And with that typically direct put-down I’ll leave Loudon for today, but will return soon with some of his ideas for another great Victorian institution – the cemetery.