At this time of year my favourite smell is hyacinths. Close packed into every conceivable sort of container they made ideal presents for Christmas,  but they are still be available for sale everywhere to bring a wonderful touch of spring scent and colour whatever the weather. I love to have them all over the house so that when I come home I get an instant uplift as I open the door.

But do you know where the name comes from? And who first discovered that they could be ‘forced’ to flower early, and how this was best done?  And although we’ve all heard of tulip mania in the 17thc did you know there was an almost equally wild passion for hyacinths in the 18th and 19th centuries? And at the end of the post there’s a link to info about Britains only commercial hyacinth grower.  Read on to find out more… 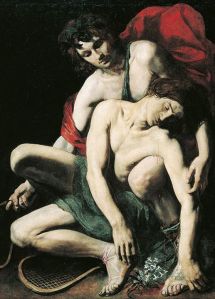 The original Hyacinth was, according to Greek myth, a beautiful young man who became one of the lovers of Apollo.  Zephyr, the god of the west wind, also fancied Hyacinth and became jealous with fatal consequences.  His opportunity came as Apollo and Hyacinth were competing in throwing the discus, and  in a fit of pique Zephyr summoned the wind and blew the discus off course. It struck Hyacinth on the head and killed him.  Apollo was distraught, and to prevent his lover being claimed by the Underworld, as so often happened in such stories, turned drops of the dead youth’s blood into flowers.  Hyacinth must have been royal since the species it’s most likely to be is normally blue in colour.

Several other plants have been claimed as his legacy but the name Hyacinthus was first given to the familiar bulb  by Joseph Pitton de Tournefort and then adopted by Linnaeus in 1753.

As always the botany and taxonomy are never as simple as it would appear. Nowadays Hyacinthus is “a small genus of bulbous fragrant flowering plants in the family Asparagacea, sub-family Scilloideae”  and it contains only three species including    Hyacinthus orientalis  the one that has been taken into widespread cultivation as the Dutch or Garden Hyacinth. However in the past the definition was much wider and  included species now placed in other genera such as Muscari  and Bellevalia.

Tile A cypress tree grows from a cluster of blue leaves, flanked by notched turquoise leaves with white flowers  and by  hyacinths.V&A

Hyacinths  are indigenous to Asia Minor and they must have been taken into cultivation quite early in the history of horticulture. Apart from the myths of its creation,  they are widely mentioned by the great classical writers both literary and medical from Homer and Theophrastus to Virgil and Ovid.  It is therefore a bit strange that they don’t appear in western gardens until after the mid-16thc. In fact they probably only reached the west when they were included in one of the consignments of bulbs sent back from the Ottoman Empire by  Ogier Ghiselin de Busbecq, the Flemish diplomat sent by the Emperor Ferdinand I as ambassador to Suleiman the Magnificent in 1554.

Most famously these consignments contained tulips but most of the other bulbs that Busbecq sent were unnamed. However it is known that the Turks cultivated and admired hyacinths, so it seems unlikely such a keen collector would have neglected to include them.  If they were sent back by Busbecq to the Emperor then, depending on when they arrived, they would have ended up in the gardens run by Carolus Clusius at Prague, Vienna or Leiden.

Hyacinths were certainly growing in the botanic garden at Padua by 1562, because they were seen in flower there by Mathias de l’Obel. He was to publish the first known image of them [H. orientalis albulus] in   his Kruydtboeck of 1581, whilst  Rembert Dodoens another renowned Flemish botanist published the first of H. orientalis in his Florum et . . . Historia  in 1568.  There is no record of them in England until 1596 when John Gerard says they were growing in his London garden. 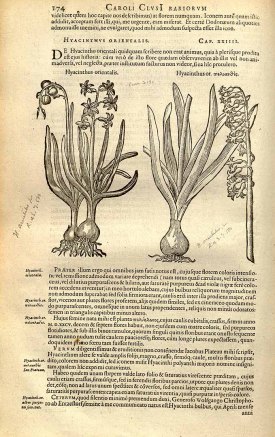 Clusius catalogued the plants that were growing in Leiden’s botanic garden in 1600 and including a few varieties of hyacinth. They were described and illustrated the following year in Rarorium Plantarum Historia (1601),  with a  range of other plants he included under the hyacinth name such as muscari and what we now call Spanish bluebells. By 1614 Crispin van de Passe included H. orientalis in his Hortus Floridus, [images above] and also described  three of its forms  each  with 8-12 florets; a blue, a pale purple and a semi-double white with green stripes on the back of each petal.

Around the same time Besler included the first double forms in his 1612 Hortus Eystettensis, as  H. orientalis flore pleno.

Parkinson’s Paradisi in Sole Paradisus Terrestris of 1629 has six single and double varieties with from 6-13 florets, their colours described as pure white, blue, and red. But as he said “whereof there are many more kinds found out in these later times than were formerly known.”

Despite being widely known hyacinths were always overshadowed by tulips throughout most of the early modern period, and it’s not until 1670 that the first half-dozen named varities appear in print in Van der Groen’s DeNederlandse Hovenier. As late as 1686 the Leiden Botanical Gardens named only 35 white, blue, mauve, and red varieties, with single and double flowers.

The precise source of double hyacinths has never been established but by 1684 Haarlem “florist” Peter Voorhelm was working on  developing them. He hit the jackpot with one called ‘Konig van Groot-Brittanje’  which achieved exceptionally high prices – up to £100 per bulb apparently  – and was still in cultivation 70 years later. His success encouraged others, including his own family to keep trying  and by the early 18thc hyacinth breeding was rivalling tulip breeding in popularity, and indeed by the mid-18thc it was to overtake it. 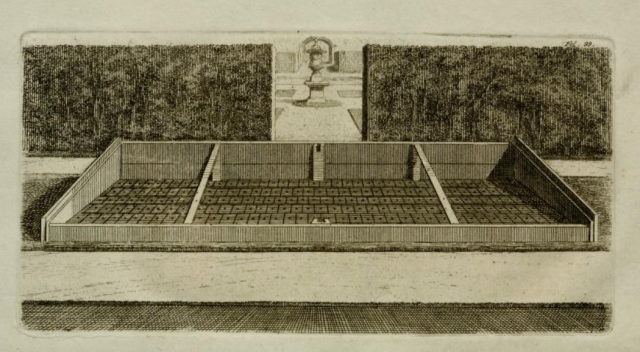 Voorhelm’s  grandson, George,  who was  a Haarlem nurseryman  published the first book on the bulb in 1753. Although it was effectively a sale catalogue, it also came with lengthy growing advice  and showed how hyacinths were grown commercially in large frames.

A Treatise on the Hyacinth was translated into in several languages and lists an extraordinary 351 best varieties –  244 double and 107 single – and 150 of them were in shades of blue. There are whites, pinks and reds but a yellow flower was not listed until a later edition between 1760 and 1770. Annoyingly there is no indication of where this colour break originated or developed.

The whole book is available in French at https://archive.org/stream/traitesurlajacin00voor#page/138/mode/2up 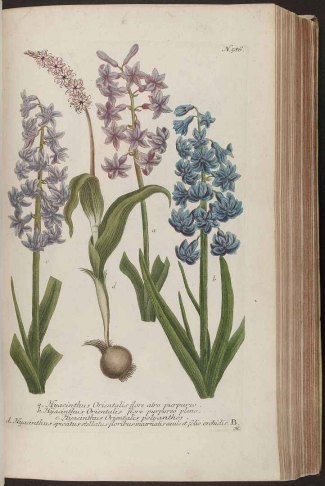 As breeders developed better varieties so they were taken on by high fashion.  Madame de Pompadour, the mistress of Louis XV  in the mid-18thc, encouraged the king to make extensive plantings of them  in his various palace gardens. She also had them grown indoors “on glasses” with 200 being on display in 1759. The flowers were also used to adorn clothing as well as decorating rooms.  Where she led the rest of the court followed, and the beneficiaries were  Dutch bulb growers who still dominated the market.

But Madame de Pompadour was only taking advantage of earlier discoveries about the way that hyacinths could be grown like this.  The Royal Society published  two papers on the subject  in 1730 and 1731. In the first”Mr Triewald, Director of Mechanicks to the King of Sweden” gave  “an account of Tulips and such bulbous plants flowering much sooner when their bulbs are placed upon bottles filled with water… than when planted in the ground.” The second was by Philip Miller, of Chelsea Physic Garden who tried to repeat Triewald’s experiments. This worked well with hyacinths and would “provide amusement for display in the chambers of those without a garden.”

If you are interested in the idea of growing hyacinths “on glasses” like Madame de Pompadour or Philip Miller then take a look an indoor bulb fanatics website! 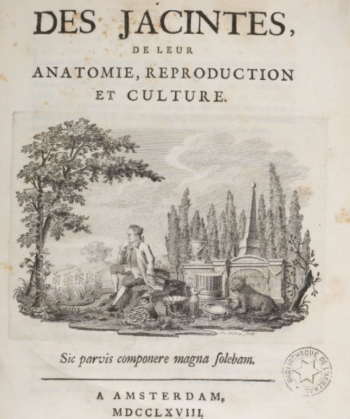 The fashion for growing hyacinths soon led to another lengthy treatise,  this time by the Marquis de Sainte Simone, a friend of George Voorhelm. Des Jacinthes: de leur anatomie, reproduction, et culture was  published in Amsterdam in 1768.  It contained  detailed instructions and notes on every aspect of growing the bulbs and then pages of lists of varieties in every colour combination imaginable. It also has a few botanical illustrations of the bulbs although surprisingly none of entire flowers. 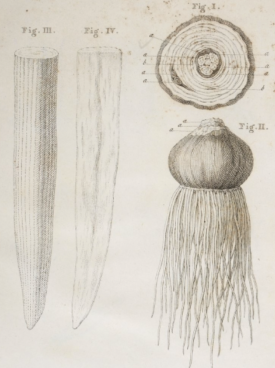 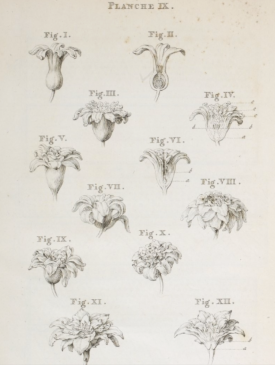 If you want to read it [in French only I’m afraid] then its at: https://archive.org/stream/desjacintesdeleu00sain#page/n5/mode/2up

The fashion was strong in England too. Queen Charlotte’s private apartments were filled with “roses, carnations and hyacinths , etc, dispersed in the prettiest manner imaginable in jars and different flower pots on stands.” [Letters of Mrs Lybbe Powys, 23rd March 1767].  By 1776 Robert Edmeades a garden supplier in the City had 1200 varieties in his catalogue, including one named Goldmine at £15 a bulb and the very dark ‘flora nigra’ at £21 a bulb. 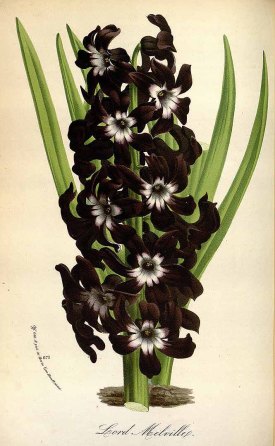 Wedgwood even produced a range of hyacinth pots and Catherine Horwood quotes a letter from Josiah Wedgwood himself  saying that one of his large bulb bowls was “to those baubles made in glass for growing one bulbous root what a garden is to a flowerpot.”

By the end of the 18thc it has been estimated there were as many as 2000 named varieties! This is quite extraordinary since they are all derived from one species, with little natural variation and with little or no, cross breeding, and so relying on sports and natural mutations.

Curtis’ Botanical Magazine noted in 1806, “with double and semi-double, with white, red, blue, and yellow flowers, in scent without end. . . . Acres are employed in the environs of Haarlem for the cultivation of these flowers; from thence we receive annually the best bulbs.” 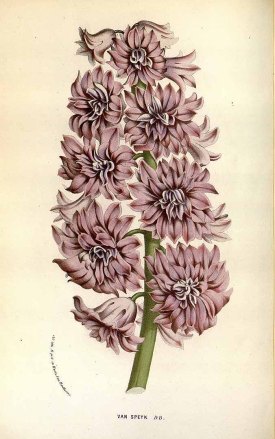 Haarlem’s success was in large part due to the quality of the soil – or rather the poor quality of the soil. Hyacinths like light sandy soil but they also like an abundance of water. Unlike most other common bulbs they are also very slow to propagate naturally and so were not worth the effort for nurserymen in places like Britain  who couldn’t offer ideal conditions.

Haarlem was to remain the centre of hyacinth production right though the 19thc although it was challenged by a thriving German nursery trade around Berlin.

By 1842 one grower there, F. Muemes Dietrich, is supposed to have had  over two million hyacinth bulbs in the ground, and certainly had a catalogue listing 359 varieties which were being exported all over Europe. Other Berlin nurseries  began to grow and, indeed, breed hyacinths and by 1866 some 25 acres around the city was devoted to them with, at one point, 1,500,000 exported to Holland!  But as the city expanded the nursery grounds were built over and not replaced elsewhere. 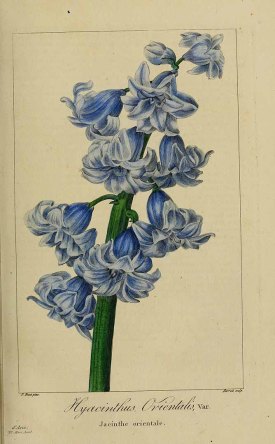 While the popularity of hyacinths didn’t decline the kinds that were in fashion altered. While the late 18thc was very fond of blowsy double varieties gradually public taste began to change, and by the early 19thc single varieties were back in ascendance.

Nursery catalogues soon began to give prices by the hundred or even thousand of bulbs, although they were still almost all imported from Holland.

One side effect of the scale of interest was  that by the mid-19thc “Grand Hyacinth and Spring Flower Shows”  were held in every major town in Britain. 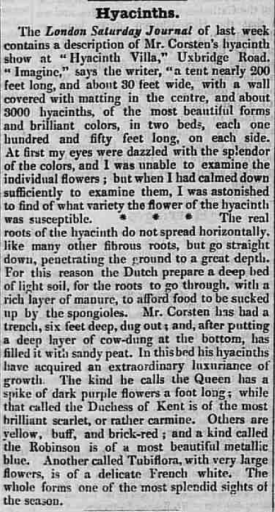 But you will notice that despite their claims to be the best suppliers their bulbs still all came from Holland. Dutch growers also sponsored prizes at these shows.

Of course this is only part of the story so if I get time I might even research these shows and why the hyacinth declined in fashionability  for another post one day! But in the meantime take a look at this link to more information about Alan Shipp, the holder of the National Collection of hyacinths and Britain’s only commercial grower