Edward Adveno Brooke and “The Gardens of England” 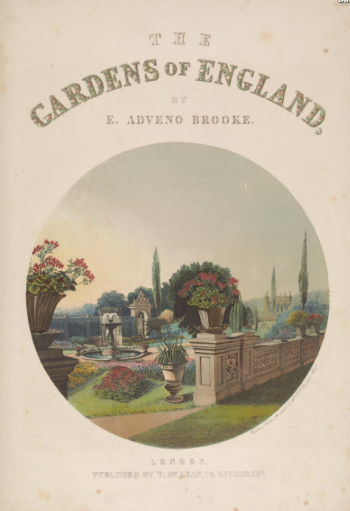 One of my favourite places to work and take students is the Lindley Library, part of the Royal Horticultural Society. It’s  interesting when taking groups there noticing how different things attract and appeal to different people. One book however always causes an intake of breath and a look of amazement: The Gardens of England by Edward Adveno Brooke.

Published in 1856 it’s a large format account of 19 of the grandest gardens in the country at the time. But it’s not the text that creates the wow factor, although when you read it it’s certainly  not merely  drily documentary, it is the images. These are based on Brooke’s own paintings and they show an innate sense of place, coupled with a romantic, even theatrical streak.  It’s no wonder they’re regarded as some of, if not, the best evocations of the spirit of great Victorian gardens. 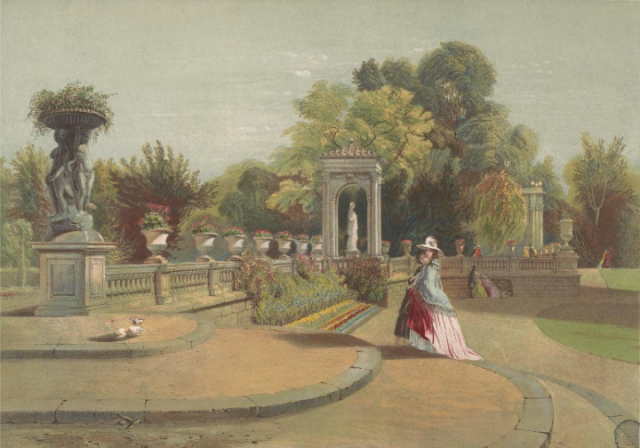 The Terrace at Trentham

So I thought Brooke would obviously be well documented and researched. But like other  “minor” artists,  including some like Beatrice Parsons who I have written about here  – I soon realised I was mistaken. Although his name crops up  occasionally in art or garden history books  it is almost always only in connection with The Gardens of England  his only published work. So this really isn’t a post about Brooke, as I’d intended, but instead one about his magnum opus which is what will keep his name alive. 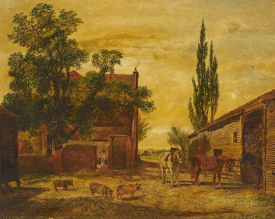 Born in 1821,  Brooke appears to  primarily have been a landscape painter who strayed into the realm of painting gardens.  He is known to have exhibited perfectly conventional  rural scenes, farms, riverscapes and fishing subjects  at various galleries including the Royal Academy between 1844 and 1864. 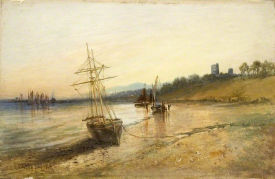 There are only occasional notices for these in the press but even they are mainly about the exhibition of the  original sketches  and paintings for the book.  So I suspect it fair to say Brooke’s  doesn’t seem to have taken the art world by storm with his other output. 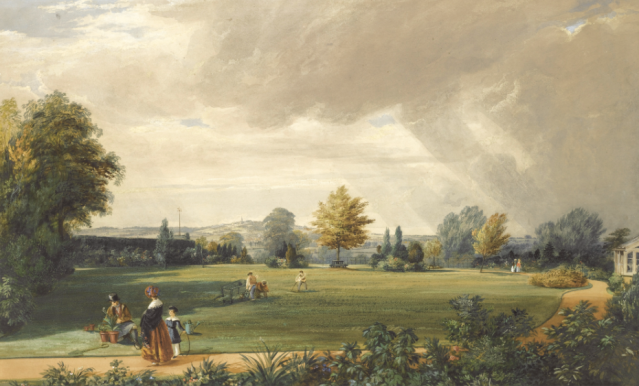 The Garden at Stowlangtoft Hall, Suffolk, attributed to Brooke, Sothebys

Brooke lived to be nearly 90, dying in Battersea in 1910, but of the rest of his life there appears to be no record.  I can trace no interviews in newspapers or contemporary magazines, and little or no academic work on him since, and even the dates of his birth and death are usually merely a footnote to mentions of his only book. 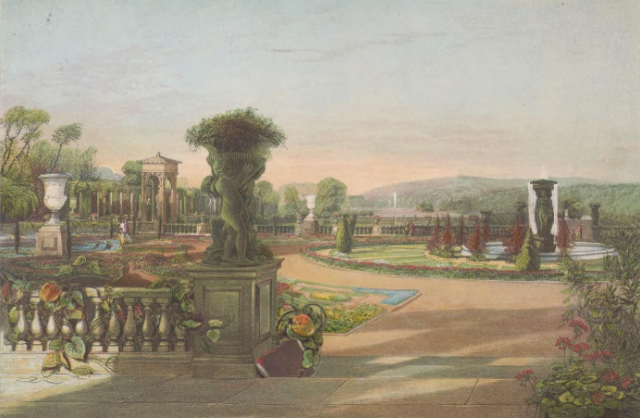 The Parterre at Trentham

Even if it wasn’t such a beautiful object in its own right The Gardens of England would still significant  because as Brent Elliott comments in the first of the Lindley Library’s Occasional Papers  in  2009, although ” the 18th century saw the gradual increase in the number of books specialising in the depiction of famous gardens” its not until “E. A. Brooke’s Gardens of England, the portrayal of gardens was augmented by colour printing.”

The publishers clearly recognized its potential and in the preface “believe that it will be considered unique of its kind. The enchanting art of horticulture has suggested and given birth to many productions both of the pencil and the pen. Scenes of picturesque beauty and floral triumphs have received ample justice … but The Gardens of England,  pre-eminent for scenic effect, magnificent decoration and scientific achievement have never yet received that attention they so largely merit.”

Trentham, the seat of the Duke of Sutherland 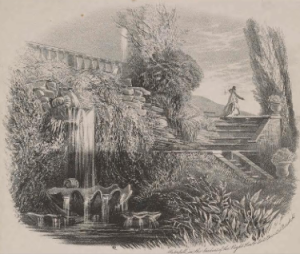 Binstead, the seat of Lord Downes

The book is 54 cm x 36cm in size, and contains   16 lithographed vignettes on india paper which were pasted into the text,  as well the 25 chromolithographed plates that were additionally  heightened with gum arabic, and a chromo-lithographed title-page. It is dedicated to the Duchess of Sutherland, of Trentham Park which is the garden that receives the most attention. Not only is it  the first described, but it has 6 pages of dense text and 4 plates, with most others only having a couple of pages and just  1 or 2 plates. 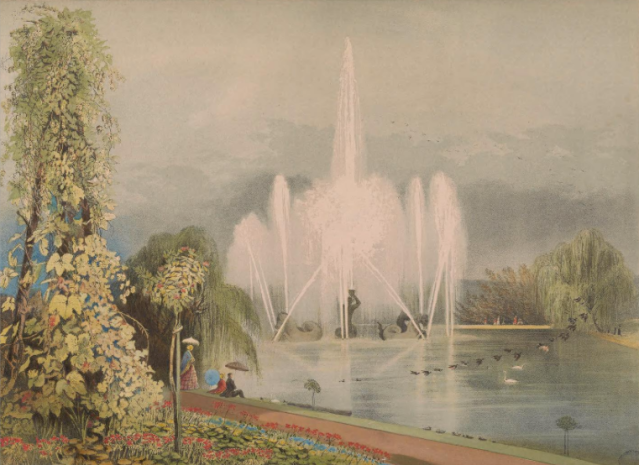 The Fountains and Lake at Enville 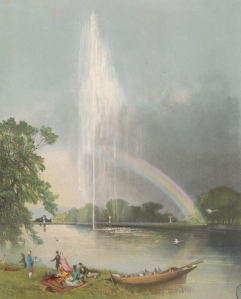 The Great Fountain at Enville

According to the short preface, Brooke  clearly  spent a lot of time creating it.  “It is the result of years of labour, and it is almost needless to add, has been completed at no small trouble and expense.…  The preparation of the original drawings required that the artist should be upon the spot whenever it was desirable to proceed, and this not for a  mere casual visit or hurried sketch, but for the  purpose of patient care for labour.  Tlus, Mr Brooke has spent several summers in undivided attention to the views contained… not satisfied with first or second studies, he has made repeated visits to each locality, and is enabled, therefore, to offer drawings which are correct and faithful in all their details.” 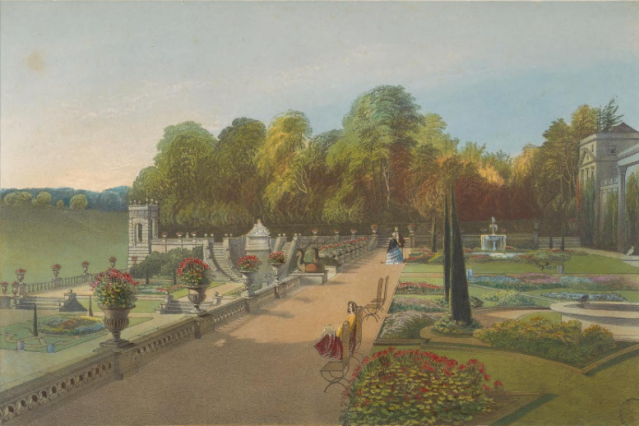 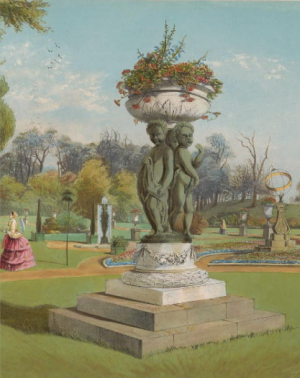 detail from the Terrace Garden at Woburn

“It is with the greatest confidence that this volume is now presented to its distinguished patrons, many of whom, as the generous and liberal owners of the gardens, are certainly the best judges of its artistic fidelity.”

It was to be the first of at least two volumes,  because it represented “but a portion of those beauteous scenes of flowers and foliage which are to be met within England wherever rank and taste are present.  Very many of these gardens, though of matchless character, and developing the highest culture and elegance in this style of art, are as yet   undelineated… It is therefore purposed, should encouragement be afforded… to issue a second, so the work may become more complete in character…” 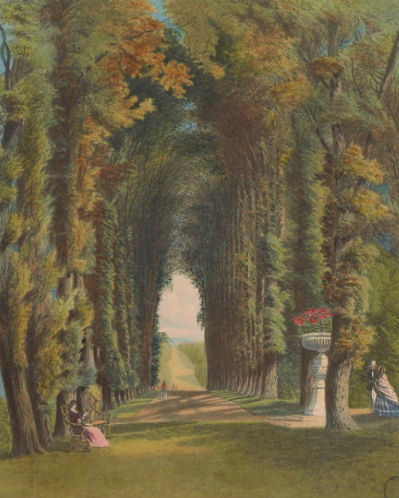 Vista in the garden at Teddesley-Hay

The text “presents details –  historical and descriptive –  which it is hoped, will give increased interest and value to the drawings.  Much information has been obtained from those who are the custodians of the gardens themselves, men who are developing by the skill and research, a glorious art which is rapidly changing the face of the land.”

From the first Brooke takes an effulgently  romantic – even theatrical – tone rather than the usual  mundane descriptive approach and he  certainly gives a powerful sense of atmosphere. 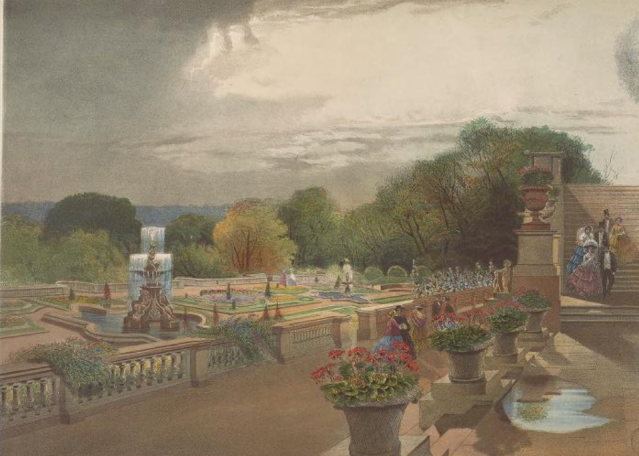 The Parterre at Harewood

To spare you reading  pages of it, here is just one sentence from one of the opening paragraphs:  “the hours are passing onwards, the shadows of the sun are lengthening, the leaves of the fine old  trees in the park quiver in the dying breeze on a cloudless sky, and the beauty of the day is upon us.  We will take our stand on the terrace garden above the part, and contemplate the scene opens before us in this gliding and expressive hour. Is it beautiful? Is it poetical?..” and so on and so on and so on. 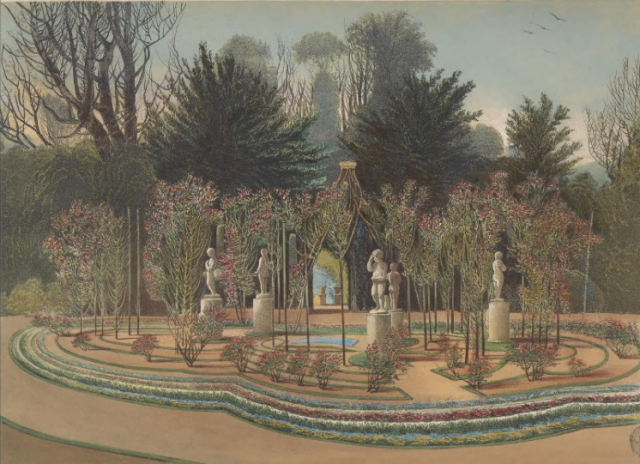 The Rose Garden at Nuneham Courtney 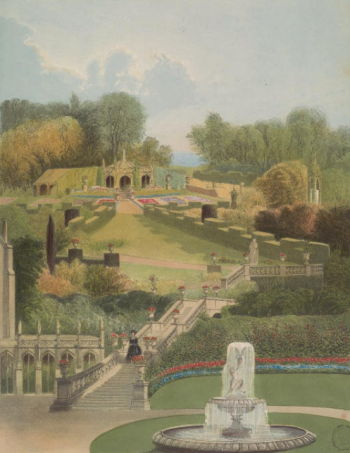 The Garden on the Hillside at Castle Combe

This does not mean Brooke is oblivious to the main task of telling what’s actually in the garden or how it is laid out, but his style is rapturous rather than realistic:  “Look at those sweet roses, in raised beds of wrought stonework, about the path clinging to the form of Atalanta; how they smile upon her eager, confident face.”

“In each ground floor window, arranged in ornamental boxes, a continuous line of the Golden Chain Geraniums completely realises the novel idea of producing by means of floral embellishment an effect… as rich as that of decorative gilding.  A rippling sound of water too, comes even here –  a sound that ever pleases and softens with its gushing murmurs and floating song –  it is a fountain; and there, in marbled grace, amid the refreshing garlands of foliage and flowers, Eve seems to watch the changing beauty of her face in the crystal mirror below.” 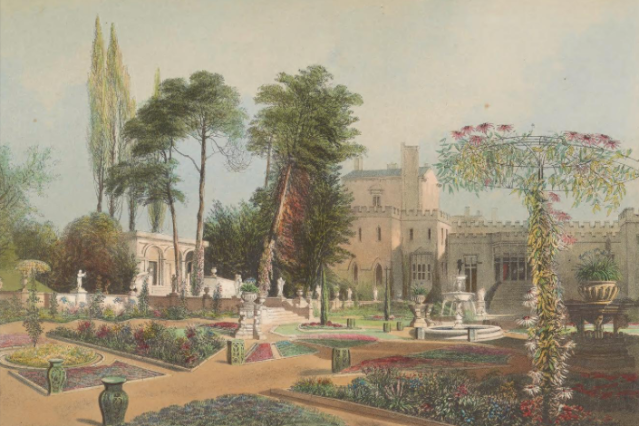 The Parterre at Wilton

“In admirable contrast to the brilliancy of the flower gardens is the quiet, secluded character of the promontory…  The rock work is good, and not so often happily expressed; and as we sit and gaze across a smooth surface of the lake, broken into occasional ripples by the rising fish, on the opposite wood which rolls wave-like down to the shore, we are insensibly led to feel how soothing and beautiful is the calm Poetry of Nature.” 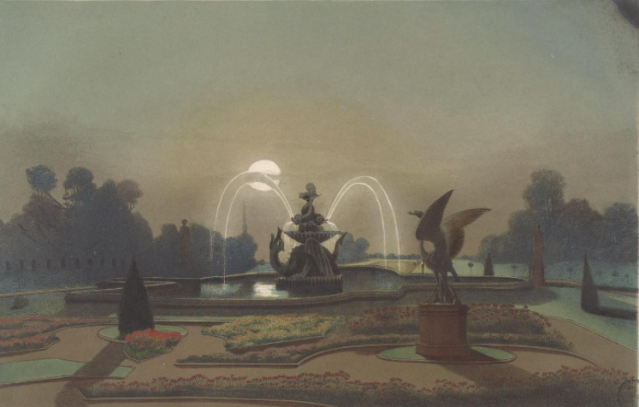 The Dragon Fountain at Eaton Hall

I’m sure you get the picture.  His language matches the garden style. 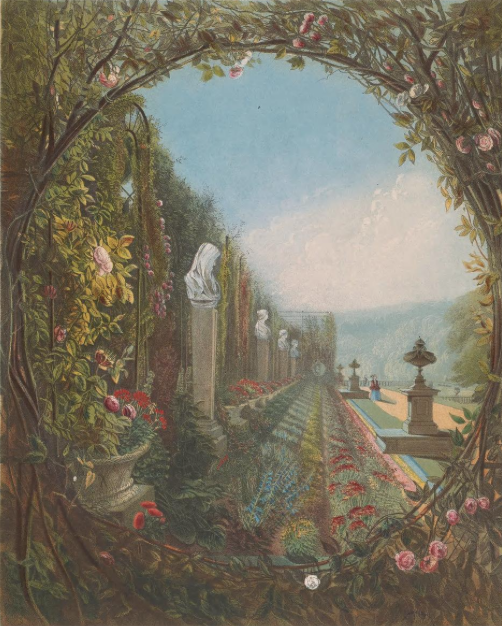 The Trellis Window at Trentham

But Gardens of England  was not universally popular. One critic commented sharply about the image above that : “The price appended to a picture by Mr E.A. Brooke prepared us for something great, only to be disappointed, however for it is not to be believed that anything in such poor taste is to be found in the Duke of Sutherland’s garden…” [Manchester Courier, 4 November 1854]

Nevertheless Brooke was recording  trendsetting gardens that influenced fashion for the next 50 years.  Each of his descriptions stresses the formal architectural setting, and  the  Italianate style developed by, amongst  others, Charles Barry, who was later to go on and design the Houses of Parliament.   Its pictures are clear, precise and very carefully delineated in a way which was go out of fashion  probably within 30 years as the arts and crafts movement looked for simplicity and the vernacular on a much more modest scale.  If you compare Brooke’s paintings with those of Beatrice Parsons or George Elgood you will see just what I mean.

Sometimes his sense of scale and proportion is exagerrated, with the human figures appearing slightly shrunken besides a massive fountain, or the size of an urn apparently exaggerated for effect. But this merely enhances the grandeur of the scene.   Nor does Brooke have much interest in portraying individual plants, often they’re not even meant to be recognised, although there are  some cases where it’s particularly important such as the  nasturtiums in this urn. Instead generally he is  is looking for the overall effects of colour and form with great sweeps of massed bedding, urns overflowing,  and pillars draped so that individual plants are subsumed in the grand scheme of things.  As Penelope Hobhouse said in Painted Gardens”   for Brooke “style is everything.”

And if you are enamoured enough to want to have your own copy of The Gardens of England be prepared to take out another mortgage because the last time I saw an auction notice the estimate was around £20,000! 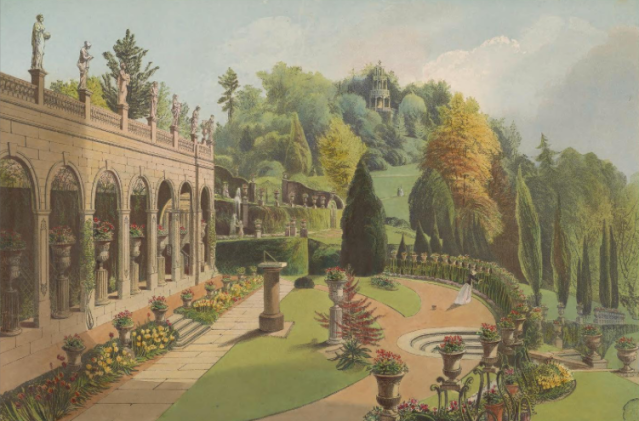 The Colonnade at Alton Towers

And if that leaves you a bit shocked then perhaps we should finish  with another quote from Brooke’s account of Trentham.: “the rapturous exclamation of its numerous visitors could not possibly be more apropos or deserved –  this is fairyland indeed!” And that was what Brooke was doing: recording the fairyland of the  grand Italianate garden that was so soon to disappear….and for that maybe £20,000 is a reasonable price to pay! 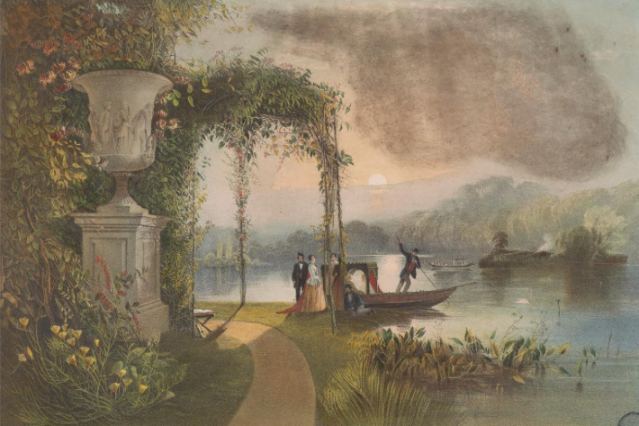 The Lake at Trentham