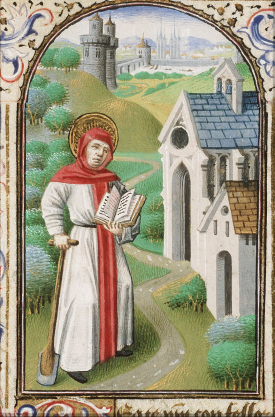 detail of St. Fiacre from the  Book of hours of Simon de Varie National Library of the Netherlands

I forgot to celebrate St Fiacre’s day last year. I bet you did too.   But I did better this year and did so in the appropriate surroundings of the Gardens Trust’s annual conference in Birmingham which is taking place this weekend. Unfortunately that means I wont be able to get to the festival of St Fiacre at Meaux, near Paris,  which is better known for its Brie and its mustard than for its saints, although I could still take part in the international pilgrimage  and festival of St Fiacre at Senlis next month. But why am I telling you all this stuff about a strange-sounding saint you’ve probably never heard of in a garden-related blog?

It’s because St Fiacre just happens the patron saint of gardening, and his “official”feast day falls on the 31st August although there are some local variations on that date including today, September 1st.  Since I didn’t really know  why he had that privilege and responsibility I thought I should find out.

Of course the mediaeval world was besotted by saints – I was going to say bedevilled by but that somehow didn’t seem quite right. One or other of them was believed to watch over  after every minute aspect of daily life.  Legends grew up around them and although many are obscure like Fiacre  [perhaps a polite way of saying they are either imaginary or have lives which have been  ’embroidered’] nevertheless they became well-known, if only locally, with shrines, chapels, wells, springs and statues dedicated to them.

So this post is the story of how an obscure monk from Ireland – became the spiritual guardian of gardeners, and for different reasons, believe it or not, also, of taxi-drivers and sufferers from haemorrhoids.

A part of the display for the festival of St Fiacre at the church of St Marceau, Orleans

The story of Fiacre is pretty thin and like most early saints, it depends more on folklore than hard evidence.  In some versions he’s a Scottish prince who becomes a monk in Ireland. In others he’s Irish and  probably really called Fiachra. He is not mentioned in the very early Irish calendars of saints, but the ‘accepted’ version of his life [ie that given in The Catholic Encyclopedia] is  that he was born in Ireland  around the close of the 6thc, and then educated in a monastery before becoming a monk himself. He then went one stage further and became a hermit near present day Kilfiachra, or Kilfera in County Kilkenny.

The site and his holy well still exists, and there has been a recent revival of the annual pilgrimage in his honour. There are even the remains of “his” church although that’s a slight exaggeration since it probably only dates to the early 18thc, but, as the blogger on Irish Holy Wells says optimistically ” it is difficult to be sure”.

Unfortunately for Fiacre he became a very popular hermit, – a sort of contradiction in terms – and was soon swamped with visitors. This made him yearn for  solitude so he fled to France where legend has it, he ended up at  Meaux a small town to the north-east of Paris.  The local bishop, Faro, himself to become another little-known saint, had Irish connections and is supposed to have offered Fiacre all the  land he could turn over in a day. Of course, being a saint in waiting,  Fiacre, didn’t use a sapde or a plough but the point of his hermit’s staff to miraculously turn  the soil, in the process clearing the ground of all the weeds and scrub.

Perhaps unsurprisingly this raised a few local eyebrows, and one disbelieving woman, Houpdee, rushed to the bishop telling him what Fiacre was  doing, proclaiming it must be the devil’s work.  Faro immediately set off to see for himself but equally immediately saw that Fiacre’s wonder-working was divinely not diabolically inspired.  Fiacre seems rather harshly to have taken exception to the interference and is said to have excluded all women from the precincts of his monastery, on pain of severe bodily infirmity. Of course  since women were commonly excluded from many monastic foundations at this time  the saint’s apparent vehemence loses some of its sting.

Having built a hut and created a garden to grow his own food Fiacre lived a life of manual labour, combined with mortification, prayer, vigil and fasting. Once again his fame spread and,just as in Ireland, he was soon swamped with visitors and even a group of disciples. This time however Fiacre did not run away from the crowds but instead built a hospice for  travellers, and  a shrine to the Virgin where they could worship.   Gradually this developed into the little village of St Fiacre-sur-Marne.

More basically and saint-like Fiacre fed the poor and cured the sick by laying on his hands. Stories are told of how he cured blindness, polyps and fevers, but somehow he gained a reputation for dealing with   haemorrhoids, which acquired the tasteful euphemism “Saint Fiacre’s figs”.  Apparently this association derives from a story in which Fiacre is said to have sat on a millstone which  miraculously soft became when touched by his saintly backside. What can one say!

Fiacre’s miracles apparently continued long after his death in 670 and he became one of the most popular saints in France, Flanders and Brittany during the late Middle Ages with crowds visiting his shrine for centuries. His reputation grew, partly of course because having a local saint associated with your monastery or town was a profitable business. 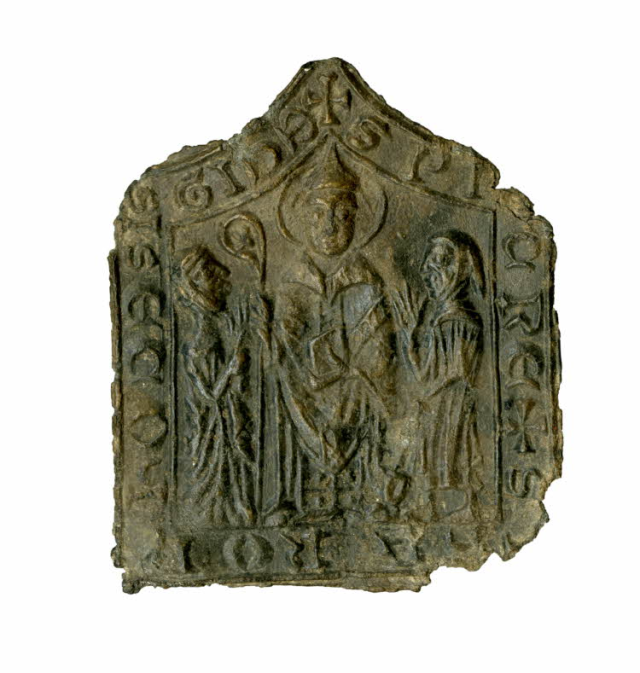 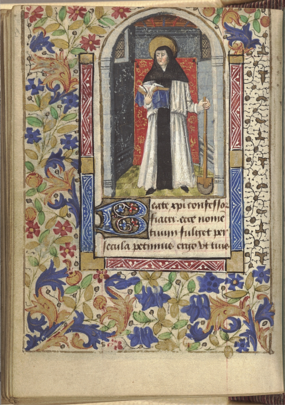 So by 870 Fiacre gets his first mention in a documentary source when another Bishop of Meaux, Hildegaire, included him in his biography of Bishop Faro [two local saints obviously being even better than one] This account provided the basis for the story of his arrival and the foundation of the settlement. A couple of other manuscripts from the 10th and 11thc add some extra details, until finally Fiacre got a “life” of his own written in the 12thc by a monk in the priory he founded.  Of course these “biographies”  all tell us more about the mediaeval mind and context that they do about the “real” Fiacre.

In 1234 Fiacre’s bones were transferred from his tomb to a new shrine by the then bishop, with one of his arms for some reason being placed in as separate reliquary. This was ‘upgraded’ in 1479 to a silver shrine and that in turn was transferred from his own church to the cathedral in Meaux,  ostensibly to save them from the iconoclastic Calvinists during the French Wars of Religion. Around the same time the next account of Fiacre’s life was written. [Acta Sanctorum, MS 8552  Bibliothèque Royale de Bruxelles] which includes such news as the English king Henry V deciding to take Fiacre’s body back to Britain but being thwarted when the horses refused to take the coffin outside the monastery precincts. 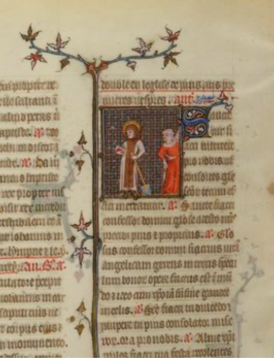 But its in the 17thc that Fiacre really assumes much higher status as a saint, although quite why is anybody’s guess.  His shrine was opened in 1617  and part of his body [although I can’t discover which bit] was given by the bishop to the Grand Duke of Tuscany, and in 1637 it was again opened and at least one of Fiacre’s vertebrae given to  Cardinal Richelieu. He may have effectively ruled France but he still suffered from haemmeroids and presumably hoped that placing the saint’s bones on them would be a cure, although we have no report of the efficacy of the treatment!

In 1641 Anne of Austria, wife of Louis XIII, gave thanks for her husband’s recovery from serious illness because of  the intervention of St Fiacre,  and  made  a pilgrimage to the shrine. Even she obeyed his injunction about women entering his enclosure and prayed  outside the door, amongst the other female pilgrims.  The queen is also known to sent a token to the shrine for the saint’s  intervention in the birth of her son, later Louis XIV, when she was 37 and had been childless for more than 20 years.

Louis’s confessor and adviser, Jacques-Bénigne Bossuet, was Bishop of Meaux and both he and the king are also recorded as invoking Fiacre’s prayers and support. Unfortunately the shrine was destroyed during  the Revolution and he now has to share a chapel with two other saints. Maybe Fiacre is the reason why the gardens at Versailles are so  impressive. Certainly Jean de la Quintinye who was in charge of the gardens is supposed to have founded  the Confereres de St Fiacre, a semi-secret professional lodge, amongst the gardeners there. [Loudon 1829] 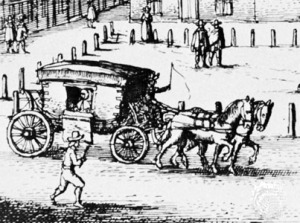 carriage, detail of an engraving by Hollar, 1646; British Museum

Its  from this period too that Fiacre acquired his influence over cab-drivers. In around 1645 Nicholas Sauvage began hiring  boxlike 4-wheeled horse-drawn carriages.   The business was based  at the Hotel Saint Fiacre which of course had his image as its  sign so that over time the coaches came to be called ‘fiacres’ and the saint was adopted by taxi-drivers.

Onguent de Saint-Fiacre – now often made up of clay, sieved compost and water

Loudon also notes that Fiacre also gave his name [or rather had his name given] to the “grafting clay” used by French and Dutch nurserymen. The Onguent du St Fiacre was comprised of 5o% cow manure and 50% good loam, and was used for excluding air from all sorts of plant wounds as well as to surround and protect grafts.  It’s still in use today although often with a different recipe, and is widely recommended by organic gardeners.

Today there still many oratories, chapels and churches dedicated to him, as well as statues, mainly in northern and western France, as well as Ireland, Belgium and the Netherlands.   whilst  his shrine at St Fiacre-sur-Marne near Meaux is still a resort for pilgrims with all sorts of bodily ailments.

Saint Fiacre’s millstone seat and tomb in the church 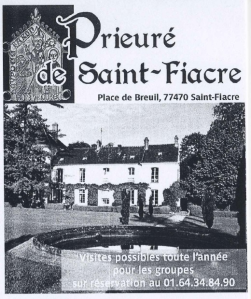 Of course the priory built later on his hermitage site, was sold off like all church property during the French Revolution. However, his tombstone and the millstone he softened [ now sadly once again as hard as millstones usually are]  are still there  in the village church.   There is also a 19thc oratory built on the site of what was thought to be his hermitage. 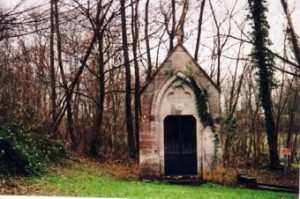 The only serious recent study of St Fiacre and his legends and legacy was undertaken for a Franco-Irish conference in 1970 to mark the 1300th anniversary of his death, but unfortunately I can’t find any associated publication.

Fiacre’s feast day has now become an excuse for various gardening groups and fraternities particularly in France and Belgium to hold their annual jamborees.  Some, like the celebrations held in Orleans or Sens are very grand affairs with thousands of people on the street, elaborate decorated floats and wheelbarrows, and there is even an international association to   promote such events as well as pilgimages to Fiacre-linked sites.

So…. when you next have to deal with a with an overgrown weedy patch remember to pray to St Fiacre and ask him to bring his miraculous spade and help clear it with you,  and even if he doesn’t actually help with the digging and  lifting, maybe he will grant you patience and not-quite-such a painful back! Although judging by his expression he’s heard that prayer before…