Barbie at the Botanics… 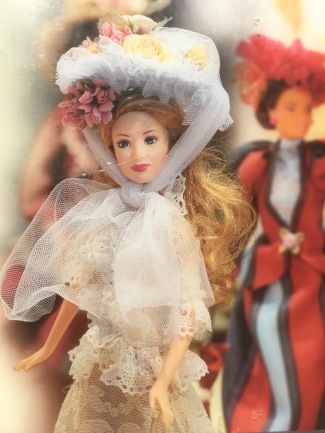 Barbie – but not as you know here!

After last week’s rather serious post about emblematic gardens perhaps its time for something lighter so here’s the story of the surprise  I had last Thursday afternoon. I’m still not quite sure if it was one that caused more amusement than shock and horror, but you can judge that for yourself when I tell you I met Barbie and Ken and several of their friends.

Part of the surprise was because I was in the gardens of a beautiful 19thc villa in southern Spain, and part was because no-one else seemed to think it the slightest bit odd to have an iconic American toy used to interpret an historic Andalusian landscape.

I was at  La Concepcion, on the outskirts of Malaga. [Photos by me unless otherwise stated] Once  simply  farmland with a typical collection of  terraced small fields and citrus groves in 1855 it was bought by Jorge Loring Oyarzabal and his wife  Amalia Heredia Livermore. The following year they were ennobled, for their charitable work, as the Marquis and Marquesa of Casa Loring.

[A word about their names, which follow the Spanish pattern of a double surname, where the paternal family name is followed by the maternal. She was the granddaughter of an English merchant who had settled in Spain, whilst he was the son  of an American merchant who had done the same thing.]

Jorge and Amalia  were scions of two of the city’s wealthiest and most influential business families and after their marriage in 1850 they went on a six month  honeymoon touring France, Germany Switzerland and Italy  and visiting lots of great gardens.   On their return they decided to create their own. 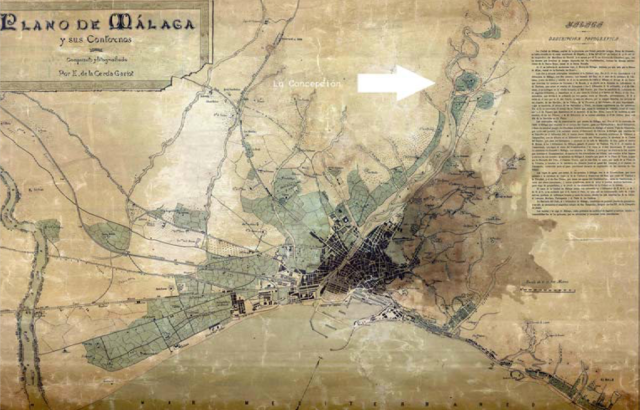 Postcard of La Concepción including a gardener who could well be Jacinto Chamoussent.

[All the historical  photos, unless otherwise stated  come from a Ph.D thesis by Blanca Lasso de la Vega Westendorp. Full reference at at the end]

While Jorge was busy building railways and becoming an MP Amalia took charge in the garden, employing  a French gardener, Jacinto Chamoussent, to help.  He was apparently skilled at  aclimatizing newly imported exotic plants, although unfortunately I can’t find more information about him. The estate archives show they scoured not just Spain but the leading nurseries in Britain, France, Holland and Belgium for new introduction from all round the world.

The estate edged in purple from 2005 map. from Blanca Lasso

The estate occupies one side of a valley, and is long and quite narrow, but extends over 24 hectares. High up on the hillside in the central section, but still well below the ridge they commissioned a German architect August Orth to design a large courtyard villa but with a classical facade. It’s hidden in the dark green woodland on the right of the aerial photo.  A motorway was sliced past the estate in the 1980s. 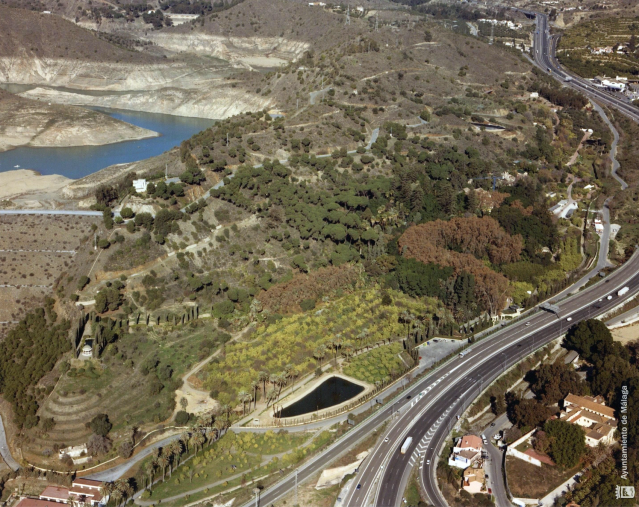 Aerial view of the estate. Large reservoir on the left, and the new motorway on the right.
Malaga City Archives

When built  the house had views over much of the estate as well as of Malaga and the Mediterranean, although  now the trees have reached maturity those vistas have largely gone – perhaps given the sprawl of Malaga’s suburbs not a totally bad thing. 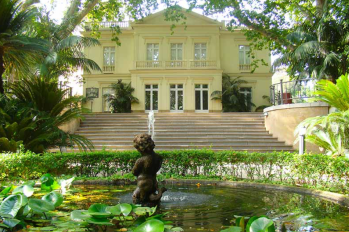 The Villa
photo by LaProxima Parada 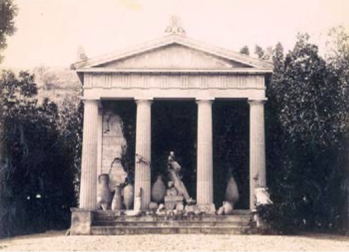 The Loring Museum at the end of the 19thc

The Casa Lorings  not only gardened but collected art and antiquities, and they built up a magnificent collection of archaeological remains, many of which were housed in the small temple-like Loring Museum built in the grounds in 1859.  Their collection now forms a major part of the local museum. 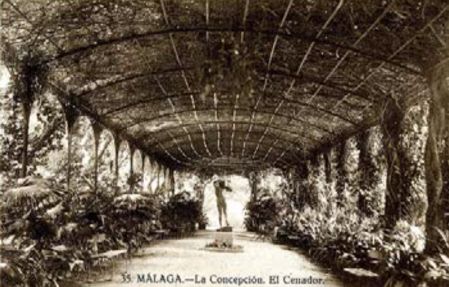 On one side of the house is a large wisteria covered arbour, originally thickly underplanted, now lined with pots. 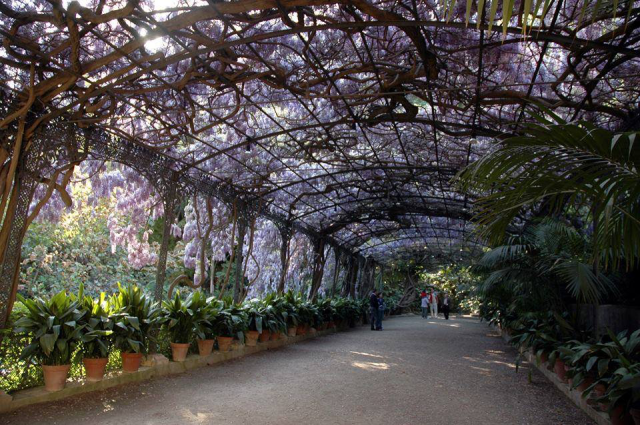 from the Andalucia Tourist Board 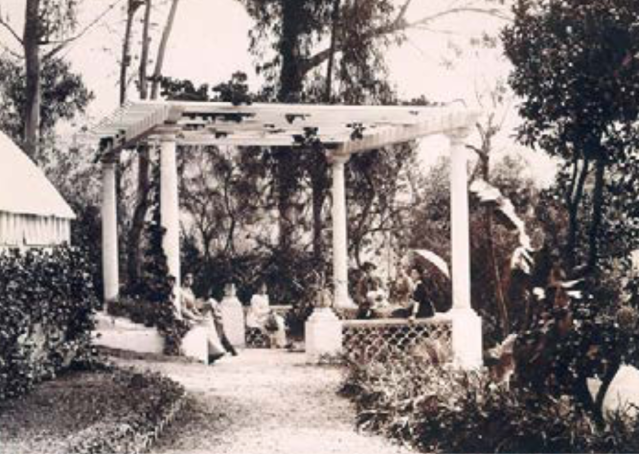 The wisteria covered pergola by the Carnation Pool [so called because it was surrounded by large pots of them]. In the background you can see a well-shaded greenhouse which is still there.

The greenhouse, with the pergola in the background.

The pergola and Carnation Pool c.1900

Spain was, in the mid-19thc gripped by continual political unrest, which was to lead to civil war and the deposition of the monarch, Isabella II.  It also caused the financial decline of the Lorings.

The cascade probably planned and laid out by Chaussement, who it is thought can be seen on the right behind the waterfall

Family photo by the cascade 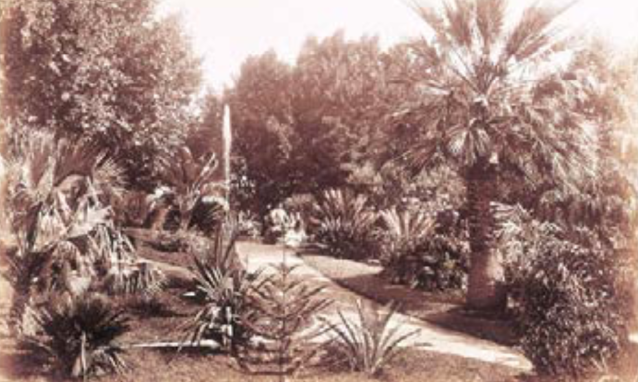 The Loring family in what is now classed as the historic central arera of the garden. 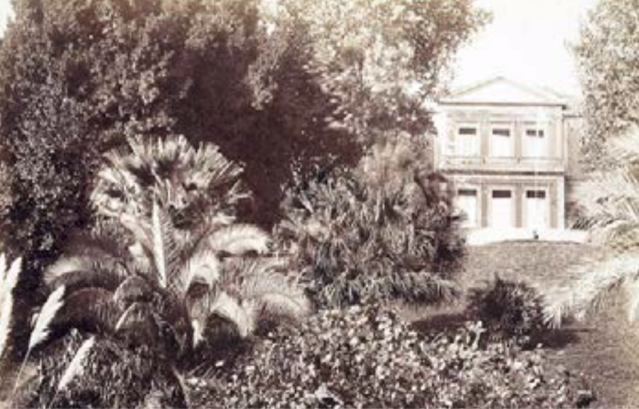 The house in the 1880s from Blance Lasso

In 1911, La Concepcion was sold by their children to another wealthy business magnate and his wife, this time from the Basque country, who used it as their summer retreat. Rafael Echevarria and his wife  Amalia Echevarrieta immediately began expanding  the garden out along along the hillside, particularly to the south,  which had previously been woodland  or citrus groves. 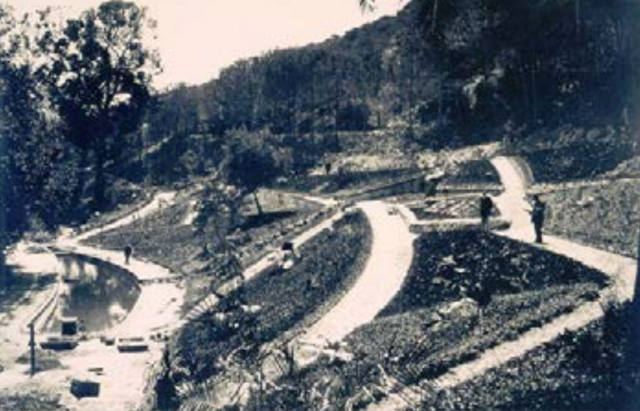 The construction of the Nymph’s Spring –  with water coming down the hillside to a pond at the base on the left.  Also, although its difficult to read, apparently the photo shows the couple’s initials in mosaiculture planting in the mid-distance on the right.

They added new features including the Nymph’s Spring and Pool, as well as   the Palm Tree Avenue which a hundred or so years later is now very impressive.

They also added the mirador  or viewing point at the southern end  of the garden which overlooks the city.

The Mirador [designer unknown] with the overflow  for the reservoir 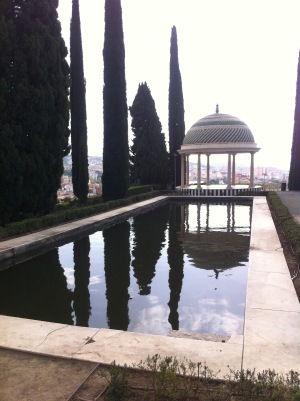 Malaga was on the Republic side during the Spanish Civil War and was attacked by Franco’s Fascist forces. La Conception took in  refugees  both in the house and the grounds but after Franco’s victory it was taken over by the military and served as a training school run by German and Italian  officers. Once the Civil War was over it switched to being a political training centre for the Falange.

The estate’s history is still being uncovered, but the family were liberal republicans and much of their property was confiscated or requisitioned.

Later La Concepcion was taken over by Amalia’s brother, Horacio Echevarrieta, the founder of what is now Iberia Airlines, who maintained it to the best of his ability until his death in 1963.  After that decline set in, as his heirs were not interested and effectively abandoned the  buildings and gardens, even  although it had been declared a Garden of Historical and Artistic Interest as early as 1943.

In the end  Malaga City Council  stepped in in 1990,  paying 600 million pesetas for the estate, and after  infrastructure and adaptation work had been carried out, opened it to the public in 1994.   They have  conserved and restored the central and most historically important parts of the Garden but, in parallel,  are using the rest of the estate to develop a  botanical garden with plant collections that can be used for scientific and educational purposes.  They have, within the means at their disposal, done a pretty good job on both counts.

The garden areas around the house would not be out of place in a semi-tropical rain forest.  There are large stands of trees including  a number of hundred-year-old specimens of ficuses  particularly Ficus microcarpa,  Norfolk Island pines, casuarinas, magnolias, pines, cypresses and cedars.  Perhaps the most magnificent is a towering   Moreton Bay Fig  (Ficus macrophylla). 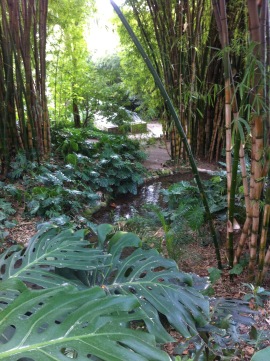 Together they create quite a dense shade canopy, even in winter, and are underplanted by huge areas of what most of us would consider house plants such as clivias, monstera [swiss cheese plants] and philodendron.  In amongst them are mass plantings  of cycads, strelitzia and bamboos. 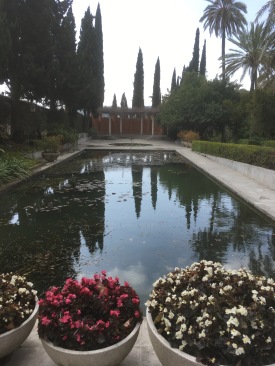 Surrounding the historic core is the more recent botanical garden. There are collections of aquatic  plants, a rockery highlighting biodiversity, a greenhouse of insectivorous plants, bromeliads and orchids, as well as collections of plants from the various mediterranean climatic zones of the world. To the north lies a walk known as “Around the World in 80 Trees”, and a large collection of palm trees as well as collections of local indigenous plants and fruit crops and vines.   The southernmost point of the garden has a collection of  the cacti and succulents,   as well as the remnants of an historical lemon grove. 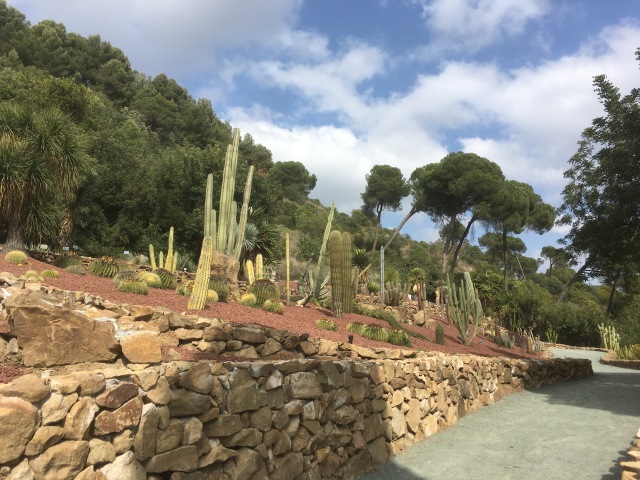 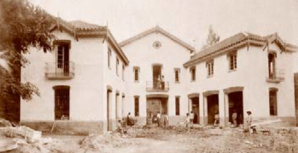 The Managers House during construction

Other estate buildings have now mostly been repurposed. The estate manager’s house which included carriage housing and stables, in what the Spanish call the  Swiss-style, is now  home to the research laboratories, library, archives and exhibition space.  There was also a school for the children of estate workers

But it was in the Gardener’s Shed that I got my surprise. The thought rather naughtily crossed my mind later of the famous line from Cold Comfort farm that there was “something nasty in the woodshed.” Its a small  simple structure erected during the Echevarria-Echevarrieta family’s time here  as a tool store. 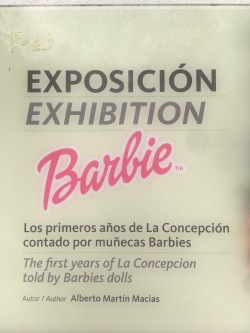 But now the Friends of La Concepcion has acquired it for educational purposes…. or rather for interpretative purposes.   They had access to a large collection of Echevarria family photographs and  the services of Alberto Martin, a hairdresser from Torremolinos. If that sounds a bit strange it gets stranger. His hobby was  collecting Barbie dolls, and he decided  to recreate the history of the gardens in the era of the Lorings using 222 Barbie and Ken  dolls, with some Action Men thrown in for good measure, all, of course dressed up in appropriate costumes. 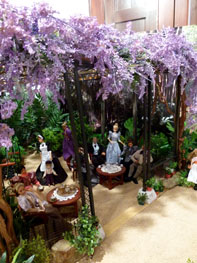 They are unfortunately difficult to photograph as they are behind glass, but here are a few shots which show the general effect. 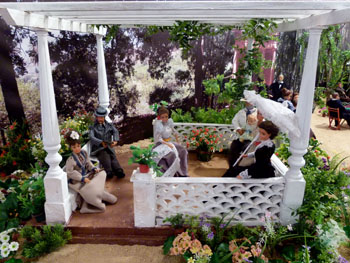 The results are “interesting” to say the least, but whether they would turn Barbie fans into potential garden historians is perhaps debateable! 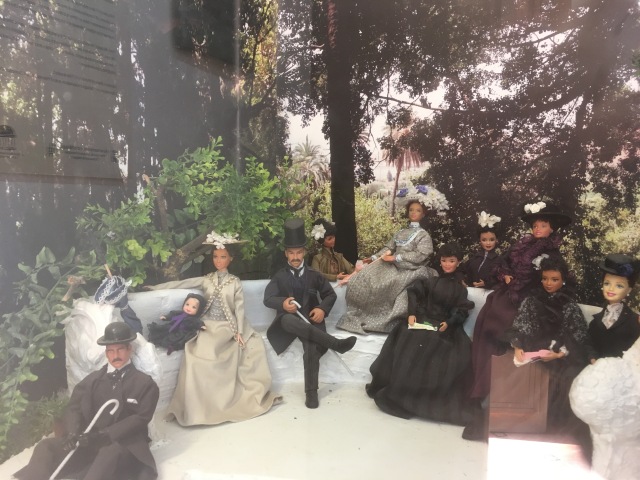 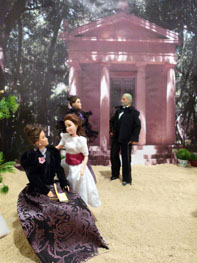 Despite the noise from the motorway that now runs past the estate, and the intrusion of suburbia into the long views La Concepcion is still a wonderful garden.  The historic core has been well-maintained and the new botanic areas, particularly those of the Mediterranean regions of the world and the cactus and succulent sections are impressive. It would be nice to think that one day its story will be properly told and the estate will find a future as impressive as its past. 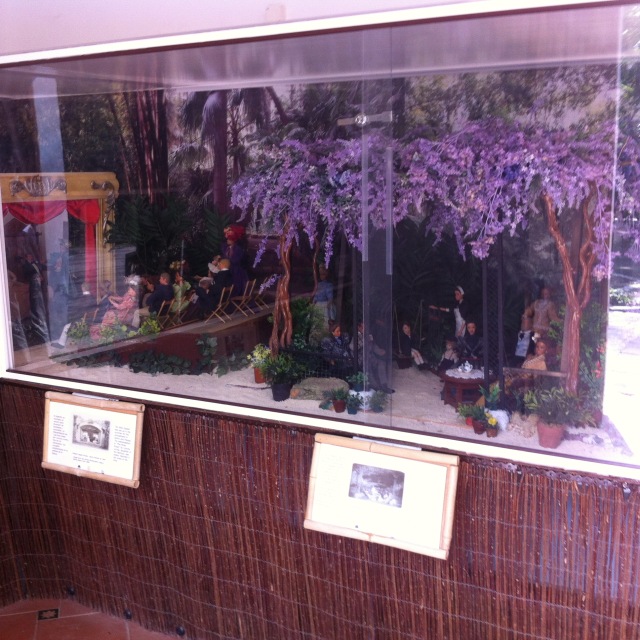 There is unfortunately no guide book to La Concepcion in English, and it would seem that little archival work has been done yet [or at least published]. However there was a PhD awarded by the University of Malaga in 2014 to Blanca Lasso de la Vega Westerdorp  for a thesis about the garden. This is available online as a pdf, although only in Spanish.  [Go to the link and scroll down the page find how to download]   I have also used the English version website of the gardens themselves which have a limited amount of information as well as the online archives of Malaga City Council and the local newspapers, Hoy Malaga and El Sur.

2 Responses to Barbie at the Botanics…