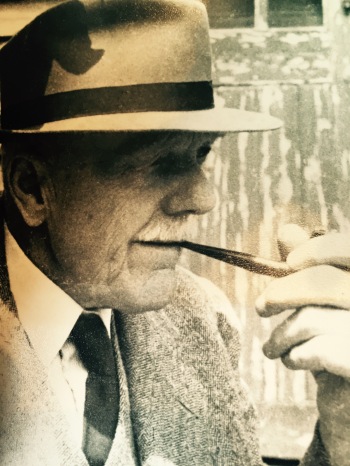 Harry Higgott Thomas was a man you probably haven’t heard of. If he’d stuck to his first career choice – working in a bank – there’s no reason why you ever would have done.  But, he changed careers, went to train at Kew and  50 years ago had become one of the best known names in garden writing. Not only was he a prolific author of horticultural books, but he worked with Gertrude Jekyll, edited Popular Gardening for more than 40 years,  became the first regular gardening columnist on the Daily Telegraph, was awarded the RHS Victoria Medal of Honour and elected president of the Kew Guild.

Read on to find out more …

It’s been quite difficult to find much biographical material about H.H.Thomas as he is usually known, so I’m grateful to the help received from his grandson, Jeremy Thomas. I’ve also drawn on the speech that was given in Harry’s honour when he was installed as President of the Kew Guild in 1953. 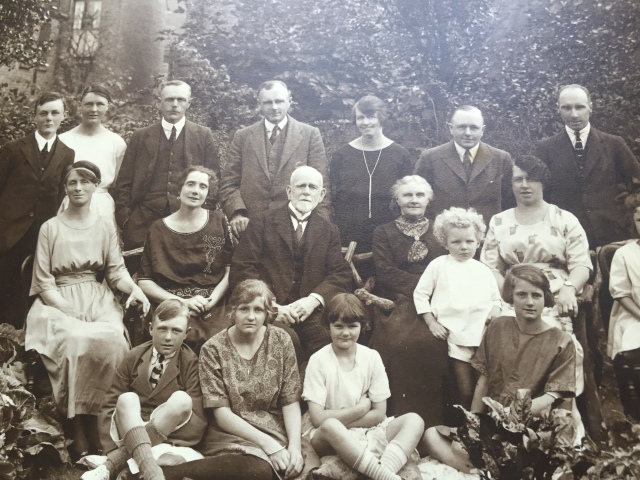 Owen Thomas with his family. Harry is immediately behind him.
photo courtesy of Jeremy Thomas

He certainly came from a well-established gardening background. His father Owen was  a well-known Head Gardener, firstly  to Sir Robert Peel, at Drayton Manor, in Staffordshire, then to  the Duke of Devonshire, at Chatsworth, before moving on to be the Head Gardener at Windsor Castle for  Queen Victoria. This presumably imbued Harry with a real love of plants and horticulture, or, as a later editor of one of his books remarked,  the education he received from his father “was about the best possible gift which the goddess of garden-craft could bestow.”   However it was not a gift he immediately appreciated,  because when he left school he chose not to follow in his father’s footsteps but  instead went to work in a bank. As the  speech-giver noted: “fortunately both for Kew and for the gardening profession as a whole, he found the work so uncongenial that he gave this up after a few months.” His next job was a trainee gardener at Windsor. 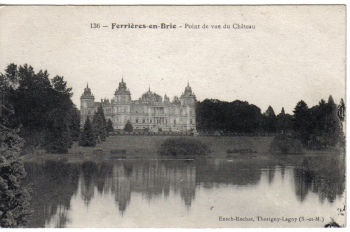 Harry’s time at Windsor was followed by two years at Baron de Rothschild’s gardens at Cannes and at Ferrieres-en-Brie, near Paris, which had been designed by Paxton. The largest and most luxurious chateau in France at the time,  its parc a l’anglaise also included one of the finest hardy-fruit gardens in France.

Harry  then applied for  training at Kew and was admitted  in April, 1897.    Although he specialised in fruit “he did very well both in his practical gardening and also in lectures receiving the highest awards in Economic Botany, and Geographical Botany, whilst he tied for first place in the British Botany Club with a collection of some 658 specimens. Mr. Thomas apparently took an active part in sport as well as work and was captain of the cricket team in addition to supporting other branches of the students’ activities.” 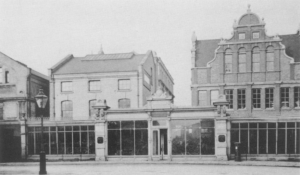 After his graduation from Kew he took a job at  Veitch’s Nursery on the Kings Road in  Chelsea, before eventually returning to the royal gardens at Windsor, this time  as foreman  of the fruit department. 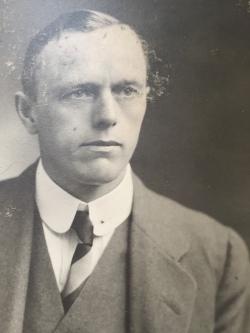 Whilst in these positions he also began contributing articles to various gardening publications.  His writing was obviously well received because in   1900 he was offered the post of sub-editor of The Garden, which was then edited by Gertrude Jekyll and E. T. Cook. Such a prestigious start really launched  his career as a journalist.  In his spare time  HH Thomas now turned his hand to  writing books about gardening as well. 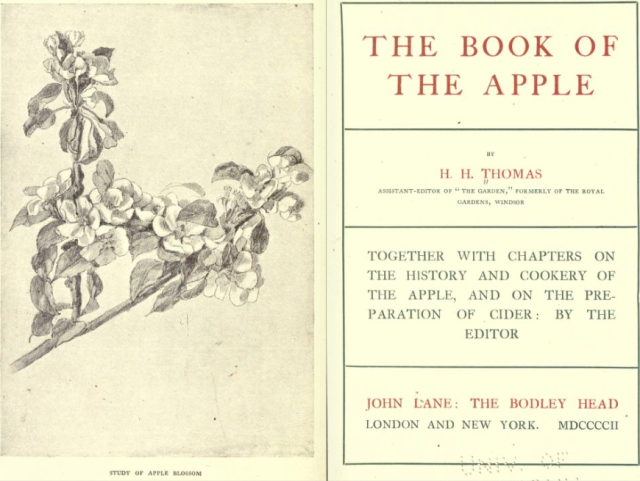 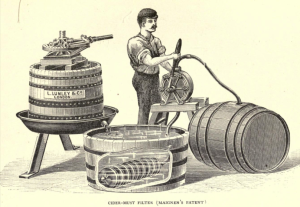 from the Book of the Apple

Harry’s  first book The Book of the Apple was published in 1902 and in it he was described by the series editor  as “a distinguished representative of the new race of gardening experts who combines scientific knowledge with practical –  including manual –  experience of their craft.” It was a short but  well-illustrated comprehensive guide  to every aspect of apple growing as well as cider making and he was helped to write it by his father.  The full text can be found at: 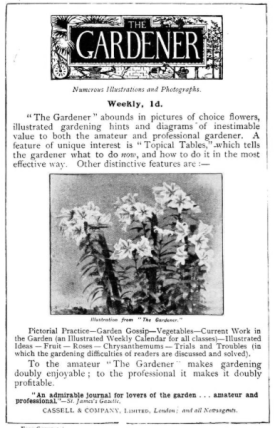 advert in The Gardener for Little Gardens, 1908.

In 1907 he was asked to take over the editorship  of The Gardener which later became Popular Gardening.  He did so and was to remain in post for over 40 years.   After this the books came thick and fast….so many fact that there is a danger that this post could simply have become a long list of titles.

In 1907 there was Gardening in Town and Suburb, in 1908 Little Gardens and how to make the most of them, in 1909 Sweet Peas and how to grow them, and in 1910 Gardening Difficulties Solved, together with The Ideal Garden and Garden Planning and Planting. 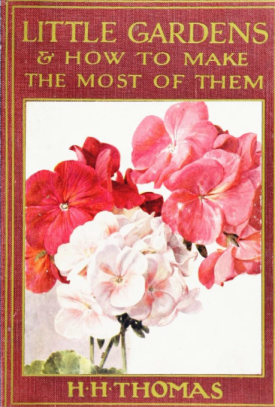 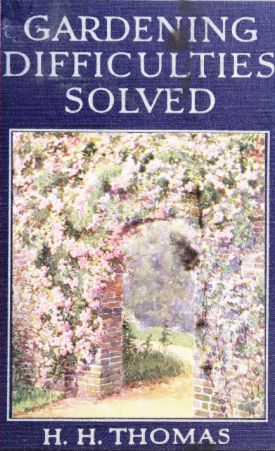 1911 saw The Pocket Gardener, and 1912 produced  three more books: The Complete Gardener, Indoor Gardening in Room and Greenhouse, and The Garden at Home, and  1913 saw three more.  These were Garden Work for every day, Garden Flowers as  they grow, and The Rose Book. 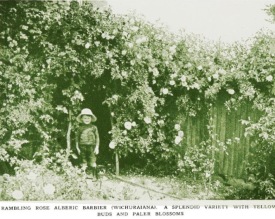 from The Rose Book,1910, https://archive.org/stream/rosebookcomplete00thom#page/n9/mode/2up

Thomas and his publishers took advantage wherever possible of the advances in printing techniques and technology. All his books were well-filled with photographs and sketches, many of them now in colour, although the plates were still usually protected by a leaf of tissue paper as can be seen in the example below. 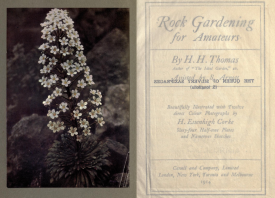 As his name became better known there were even more opportunities for writing books and in 1913 he was also asked to become gardening correspondent of the Morning Post, a leading conservative national newspaper.  You might have thought with his editorship and other journalism he was now sufficiently busy but you’d have been wrong! 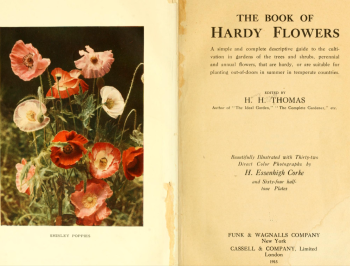 And while you might also have thought the First World War would have stopped publication of basic garden books, you’d have been wrong again.   In fact exactly the opposite was the case.

Harry had teamed up with Cassells one of the leading publishers of the day to produce a series of concise standardized books which were well-illustrated and authoritative. 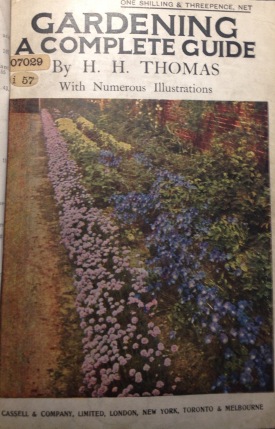 And the presses got hotter still , because  in 1917 Thomas published  no less than eight books for various Cassell series, but mainly about food crops, then 1918  saw three more:  The Complete Gardener, Allotment Gardening: a complete guide, and The Garden: how to make it pay. 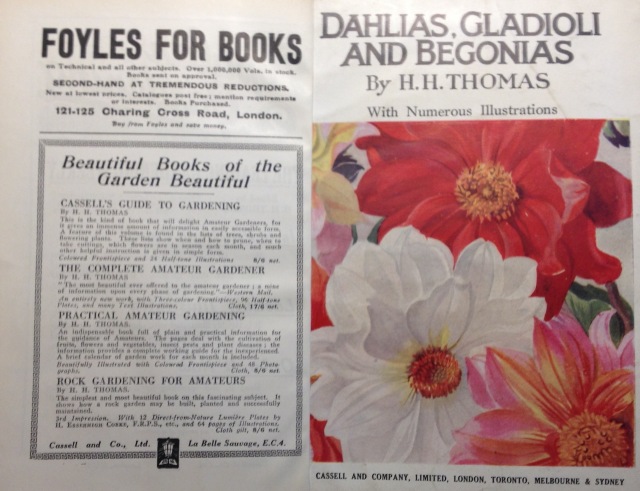 The front cover and inside leaf flier from Dahlias, Gladioli and Begonias, 1926 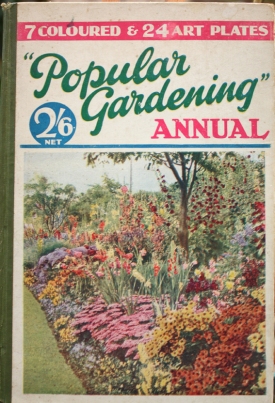 The 1920s were almost as prolific.  1920 itself saw the appearance of 4 more books: Practical Matter Gardening, The Garden Month by Month, Garden Handbook for Beginners, and The Rose Book.  In 1921 he published The Popular Guide to Gardening and the following year Practical Amateur Gardening, whilst in 1923 came Cassell’s Guide to Gardening, and in 1924 The Complete Amateur Gardener.  1926 saw Plant Pests and Diseases, Dahlias, Gladioli and Begonias, Chrysanthemums for Amateurs,  and The Popular Gardening Annual.  And it was back to overtime at the typewriter in 1927 for another six books: Pruning made easy, Home Grown Vegetables, Rock Gardening for Beginners, An Easy Guide to Gardening,  500 Popular Flowers and how to grow them, and Sweet Peas for  Amateurs.   Greenhouse Flowers and  Herbaceous Border Flowers followed in 1928.   And then finally Harry Thomas began to slow down a bit! 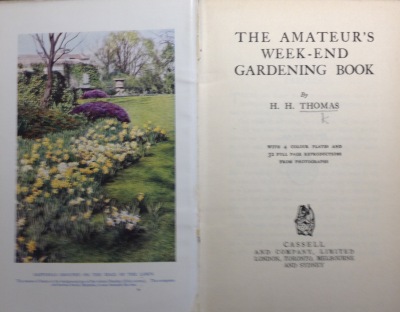 1930 marked the merger of the Morning Post with the Daily Telegraph  but Harry was kept on and  contributed the occasional news story until in 1937 he was given a regular column, although the outbreak of war soon put paid to this.

He also decided to put some of his own gardening ideas into practice on a larger scale. This meant moving from his house in suburban Ealing in west London, buying some land at Gerrards Cross in Buckinghamshire,  building a house, Wayside, and designing a garden. 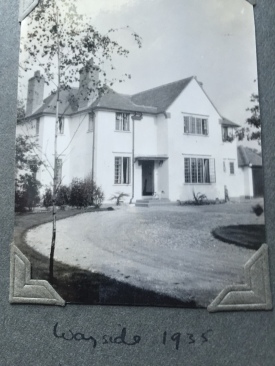 The 1930s as a whole only saw a handful of new gardening books: The Amateur’s Rose Book, The Amateur’s Weekend Gardening Book, The Popular Encyclopaedia of Gardening,  The Manual of Practical Gardening, Gardening in Towns, The Concise Gardening Manual, with Pictorial Practical Gardening  being the last before War broke out in 1939. As their titles suggest these were often reworking of earlier books, although they were none the less readable or useful for that. As Tim Richardson points out in his compilation of Telegraph garden writing Rhubarb and Roses (2013)  there was hardly anything about gardens printed in the Telegraph during the war years, and Thomas’s gardening column did not start again until 1953. 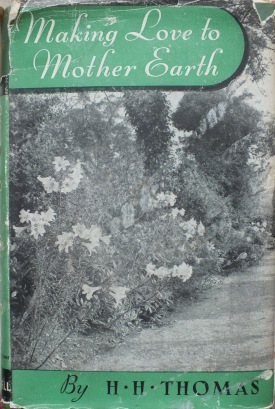 Wayside and its garden became the subject of his last new book,  the intriguingly entitled Making Love to Mother  Earth in 1946, although there was also a brief flurry of  new editions of earlier classics which appeared in the 1950s. Mother Earth is a lovely account of the transformation of a hazel plantation on the edge of mature but open woodland into a classic English garden of the period.  Sadly, although the house is still there the garden has succumbed to development and is now the site of a small estate of “executive homes.” 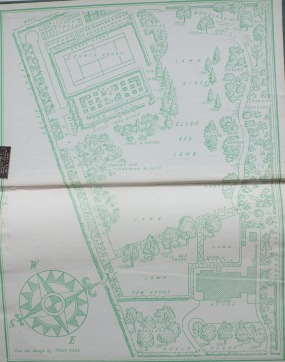 The plan of his garden, from Making Love to Mother Earth

In January 1949 Harry Thomas was awarded the Victoria Medal of Honour by the Royal Horticultural Society,once again  following in the footsteps of his father who was one of the original recipients in 1897.   On his retirement in 1953, he had been offered the presidency of the Kew Guild for that year, with the words of his proposer summing him up as : “Blessed with a quiet and kindly disposition and a good sense of humour”  before continuing ” all will wish our President continued good health in his retirement so that horticultural circles may still benefit from the vast experience of knowledge he has gained and which he is ever ready to impart to others.” Sadly it was not to be,and he died, just 3 years later in 1956 and is buried in a heather-covered grave in the churchyard at Gerrards Cross.

And if you want to read his work then over 30 of his books are available to read and even download for free, courtesy of various American university libraries, at: 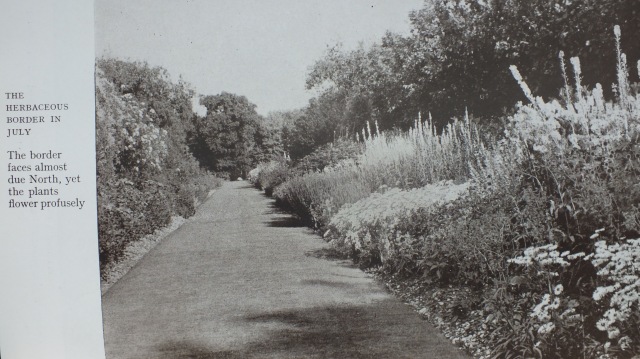 from Making Love to Mother Earth